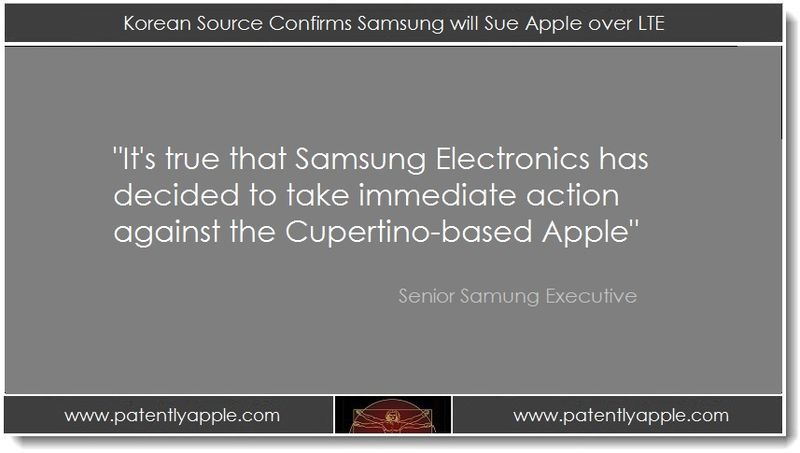 A Korean source is reporting this morning that Samsung Electronics has clearly stated this morning that they'll "sue Apple over its release of the iPhone 5 for infringing on its fourth-generation (4G) long-term evolution (LTE) connectivity patents." Major Report Update 10 AM MST

A senior Samsung representative has confirmed their intentions by of suing Apple over LTE by stating "It's true that Samsung Electronics has decided to take immediate legal action against the Cupertino-based Apple. Countries in Europe and even the United States ― Apple's home-turf ― are our primary targets."

The source states that "the Korea's tech giant's move came immediately after industry sources confirmed Monday that the U.S. technology giant will unveil the iPhone 5 featuring 4G LTE. The sources said that it has agreed with Apple to release the LTE-enabled iPhone on the local market for domestic telecommunications frequencies." Samsung began talking up suing Apple back in August.

An industry source close to the matter stated that talks between carriers and Apple ended with a good result and that they'll be happy to offer the much speedier iPhone to their customers.

A Korean industry expert is saying that "SK Telecom and KT will face some difficulty in their marketing strategies for the 4G LTE iPhone because of a fresh legal attack on Apple." Considering that the "expert" is unwilling to go on record as to who he is, he could very well be another Samsung executive or related source attempting to psych out Apple's Korean partners and sow seeds of doubt into the minds of Korean consumers. Whether this kind of tactic will actually prevail over time is unknown.

In the big picture, I don't thing that Samsung's case against Apple will be a slam dunk as they think it will be considering that Apple has amassed 434 LTE based patents of their own, with the vast majority of them coming from Nortel and Freescale. Nortel was a leader in developing LTE and if Apple's iPhone is based on patents that were legitimately granted to Nortel (and Freescale), it's difficult to understand how Samsung thinks that they have a strong enough case to easily win. Then again it's a complicated issue. A 2011 report conducted by Thomson Reuters sheds some needed light on the matter.

Update 10 AM MST: An on topic 2011 report (PDF) from Thomson Reuters states that a portfolio of high quality and comprehensive essential LTE patents that are rapidly evolving the standard is key to leadership in the smartphone patent wars. As in any case of this nature, essential patents could play an important roll in the outcome of a Samsung v. Apple lawsuit.

One of the charts shown below that is found in the report deals with "Highly Essential Patents Ranked Based on Ratio of High Novelty Patents." 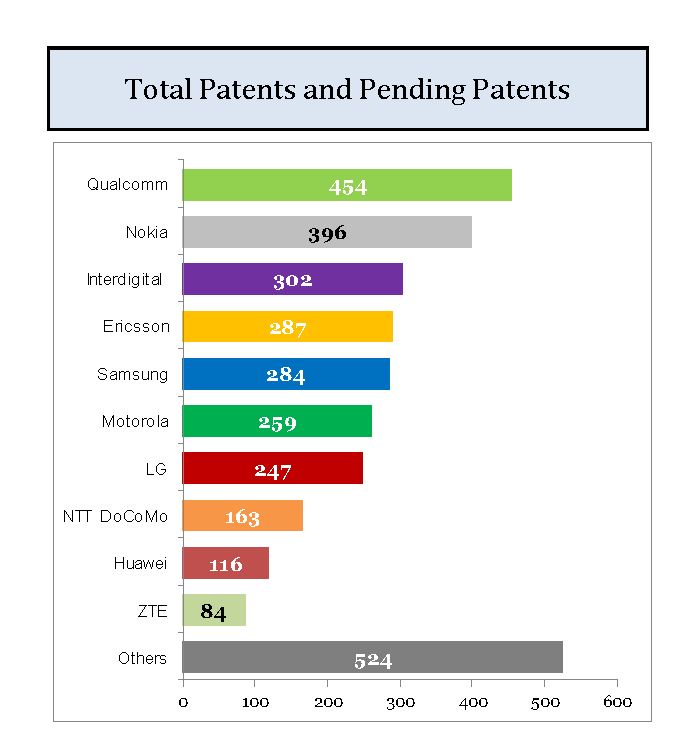 Based on Reuters analysis, Nokia, Qualcomm, Samsung and Ericsson have built the strongest LTE patent portfolios while also taking a leadership position in future LTE technologies. Of course, the landscape is changing rapidly. The second chart of interest below shows the companies ranked based on their ratio of the highest essentiality (‘A’ rating). 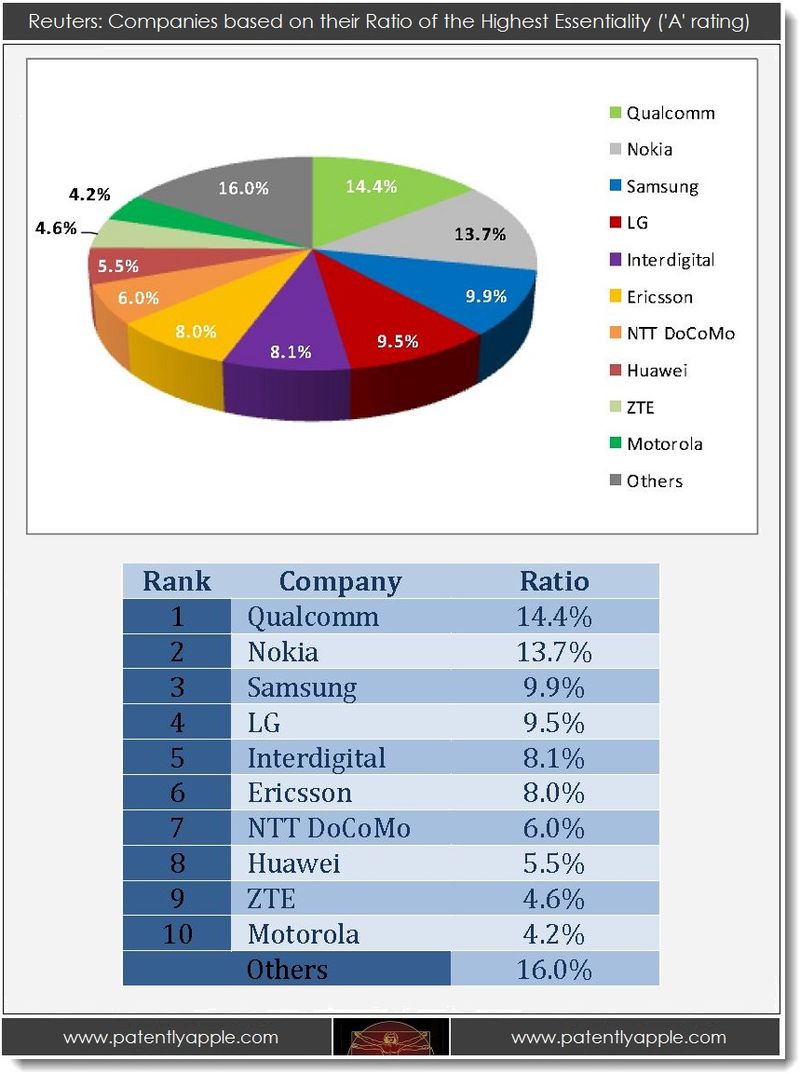 One of the points made in the conclusion of this report is that the huge valuations for patent acquisitions of Nortel and Motorola Mobility at $4.5 billion and $12.5 billion, respectively, have given Apple, Microsoft, RIM and Google representation in patent ownership of LTE technology. The report notes that Apple is in an LTE patent consortium with EMC, Ericsson, Microsoft, RIM and Sony.

When you add up LTE patents from Apple and partners Qualcomm and Ericsson alone, it would appear that mathematically Apple has an excellent chance of defeating Samsung's coming lawsuit handily. Then again, it's likely to be another huge patent case slugfest between Apple and Samsung with both camps playing it up in the press.  Macites of course, will be cheering on Apple's intellectual-property team who successfully won their patent infringement case against Samsung in August.

If you have the time, you should review Reuters report in full as it contains a lot of very interesting and relevant information about essential LTE patents. Once again, this will be key at trial.

On a personal note, I wonder if Apple's iMac will finally drop its optical drive so that the new design could be super thin: think iMac Air. I thought that Apple was going to do that four years ago. Perhaps now is the time. We'll know soon enough.

Sounds like sour grapes to me, you lose an IP case and now you want to bitch slap the winner. Samsung shouldn't have a problem with Apple, there problem should be with Google. Google sold them stolen goods with their android OS and Samsung bought it. Google is the real criminal here, they collected information of Apple's iPhone plans via their CEO who was sitting on the Board of Directors at Apple all the while be friending Apple. The whole tech world should turn on Google and stop their evil ways. Down with Google!

So where's the press articles accusing this type of behavior as "stifling innovation?" Suing for essential patents in a product market that every player adopts, versus suing over differentiating patents that involve design and user experience which give a product it's identity.

But of course, Apple will always be the bad guy, and the real abusers who harm the industry will be held to a different standard and looked at as the righteous ones. David vs Goliath. It's always more fun to cheer for the davids out there. Unfortunately, we have a lot of dull minded people out there who think this way.

It's just so amazing to me how short and selective peoples memories are. The iPhone has only been out for 5 years, and the public has ALREADY taken for granted and forgotten just how groundbreaking and different this phone was.

It'll be interesting to see how HTC can ban iPhone5 sales with a couple of their LTE patents.