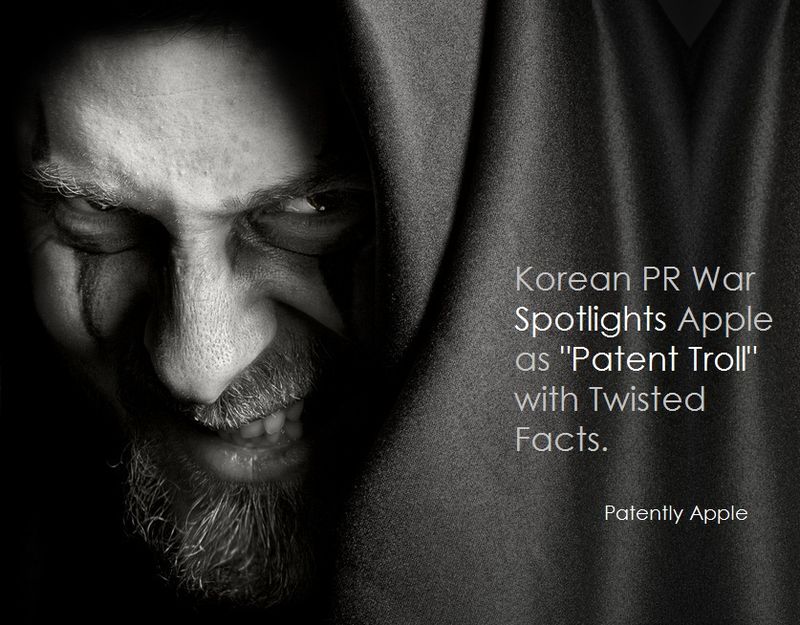 After Apple's victory over Samsung in a patent infringement case that ended last month, the Korean Times has been publishing a number of articles supporting Samsung. Some points are interesting, but like Samsung, they cling to the notion that Apple is an aggressor and, get this, a patent troll. The problem is that their source doesn't see it that way, at all.

In a new report published by the Korean Times yesterday titled "Is Apple turning into patent troll?" – They're found to be blatantly insinuating that Apple is a patent troll. The report states that "A previous study by Boston University said that lawsuits are increasing and the overall cost of these cases in the U.S. was $29 billion, last year. The study insisted that the cost burden falls on new market comers and thus curbs innovation.

We conclude that a top priority for policy makers should be reforming the patent system to make it perform more like an idealized property system and that the reform should address troll-like behavior. The patent system still needs significant reform to make it a truly effective system for promoting innovation," James Bessen and Michael Meurer, the authors of the study said."

The problem with their reporting is that they're blatantly twisting the facts of the study so as to promote this notion that Apple is stifling innovation. The specific definition of a troll found in the very study that the Korean Times is quoting but not identifying, are known as "non-practicing entities" or NPEs as we presented in our August report titled "Patent Trolls have the Smartphone Industry in a State of Emergency."

The report stated that "a study from the Boston University School of Law, patent litigation caused by "non-practicing entities" (NPEs), better known as "patent trolls," cost U.S. software and hardware companies US$29 billion in 2011. NPEs are individuals and firms that own patents but do not directly use their patented technology to produce goods or services and instead assert their patent rights against companies that do."

Apple doesn't fit the definition presented in the Boston study. The patents used in the case against Samsung were patents that Apple had implemented on their iPhone many years ago; real patents for a real product. But the Korean Times carefully chose to partially quote the study and not link to it because that wouldn't have fit their byline nor support Samsung's common philosophical war cry that Apple doesn't innovate, they litigate. More importantly, it would have exposed their lie.

Samsung's fan base eats this kind of misinformation up as if it were a political campaign and go on the attack with these half-truths. That's why I label this niche the Tea Partiers of the tech industry. It's like Todd Akin preaching his crazy whacked out views on rape. It's about feeding your fan base with what they want to hear, and the more outrageous, the better.

Apple's Legal Case has Pushed Samsung to Innovate and not Copy

In another report from the Korean Times earlier in the month, they stated that Samsung "has also found a chance to replace some Apple patents as the Korean Intellectual Property Office (KIPO) said a 'circle-to-zoom' patent was already valid."

The language that the patent holder Joon-hee chose to use to describe this patent was as follows: "the patent was aimed at beating the shackles of Apple's 'multitouch' and 'zoom' features." The Korean Intellectual Property Office reportedly described the patent this way: "When a user draws a circle with a finger or digital pen, content inside a device's screen can be enlarged. A picture can be made smaller by going clockwise. The size gets bigger, when going counter-clockwise."

That's great news to see that Apple's legal wars are forcing Samsung to innovate and stay clear of Apple's patented technology. Earlier this year Tim Cook stated that "I think the real catalyst to the tablet market will be innovation and pushing the next frontier. Honestly, we'll compete with everybody. I love competition. As long as people invent their own stuff, I love competition."

If pushing Samsung into court finally got them to stay clear of copying Apple's technology, then it's a win for Apple and the industry.

And finally, another point from the original Korean Times report states that "Apple is abusing its supremacy in consumer smartphones and touch-screen tablets to suppress innovation…" Nice theory, but the fact is that a Korean watchdog is now probing into Samsung for patent abuse as is the European Commission.

The Apple bashing in the Korean media is just incredible. Korean media caters to the public that is extremely patriotic and often distorts facts to make Apple look terrible. This has been going on for many years. It's kind of like Korean hatred toward Japan. Japan colonized Korea for 35 years from 1910-1945 and the Korean public still hates Japanese for what they did. Koreans appear to have developed false sense of reality that they are technologically the most advanced country in the world.

Just love how they (and google and others?) claim innovation is stifled when patent litigation is about STOLEN stuff, not innovated stuff.

Ah fanboi bases (any fanatical fan base), gotta love how rational thought is not necessary to join.