Earlier this summer Bloomberg reported that employees of LG Electronics, the world's second-largest flat-panel maker, had been charged over theft of business secrets relating to Samsung Mobile's organic light-emitting diode technology. Seoul-based LG Display said it plans to take legal action against Samsung Display for defamation. Some technology websites think that Apple may use OLED technology in the future and so we can understand Samsung's apparent paranoia over their technology possibly falling into the hands of an Apple supplier. The game of industrial espionage is a serious one. Some of the largest companies in the world have been tried for such activities and just recently an industrial espionage computer worm was discovered stealing AutoCAD Designs from companies and secretly sending them to sources in China. In this light it was interesting to recently discover that Hon Hai, Apple's hardware supplier in China, has filed a pair of patents for an unmanned aerial vehicle for security surveillance. Whether these aerial vehicles are now securing plants where Apple products are made is unknown at this time. 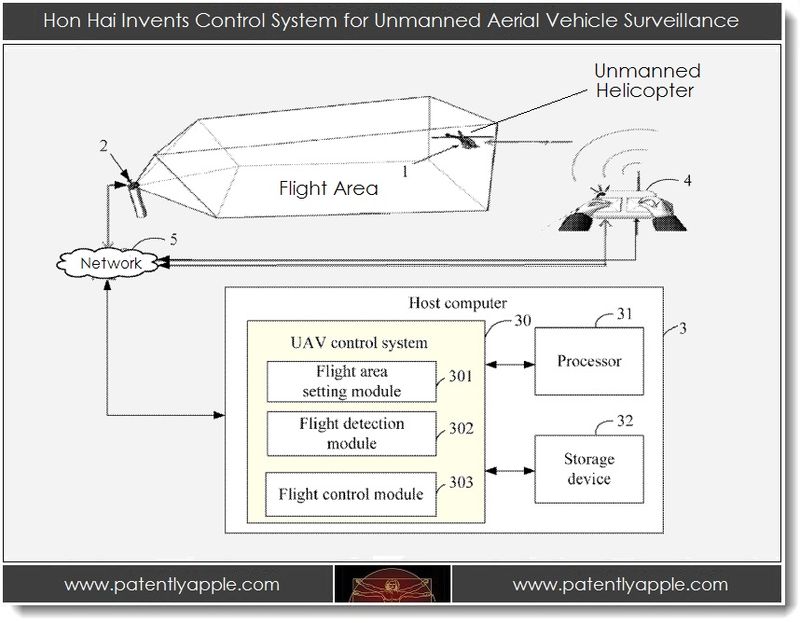 Hon Hai's patent FIG. 1 noted above is a block diagram of one embodiment of a computing device (#3) including an unmanned aerial vehicle (UAV) control system (30).

According to the filing, the computing device connects to at least one camera through a network 5, such as an Ethernet network, or any other suitable local area network (LAN). In the embodiment, the camera is a time of flight (TOF) camera device having a 3D image capturing functionality, and is installed in a predefined flight area. The TOF camera 2 captures a series of 3D images from the flight area when an UAV flies in the flight area, and sends each of the 3D images to the computing device through the network.