Convention Keynote in Seoul: Korean Firms Should Learn from Legal Battle with Apple and Focus on Innovation 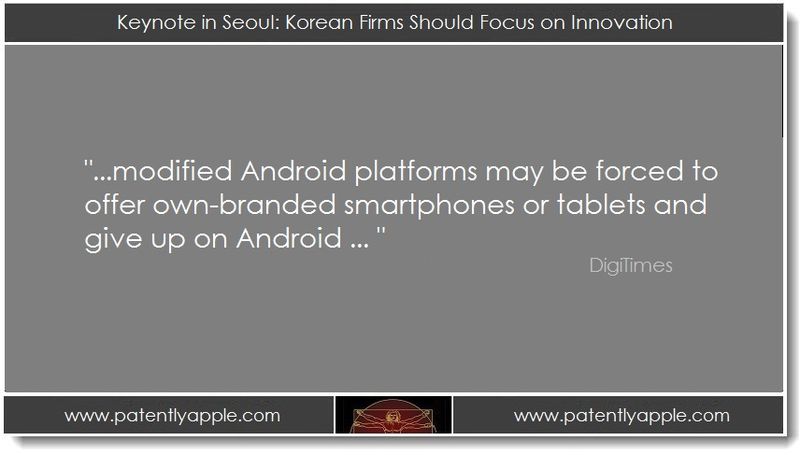 Korea IT News is reporting this morning that Korean firms have to learn a lesson from the patent litigation between Samsung Electronics and Apple and further their efforts for technological innovation while shifting the focus of their competition paradigm from enterprises to consumers.

On September 18, at an industry conference at the COEX Convention Center in Seoul, patent attorney Jung Woo-sung said in his keynote speech, "We don't have to see the patent war negatively but need to approach it in a business strategy perspective." He added, "In this aspect, neither Samsung nor Apple is a loser." He is the patent lawyer representing Choi Jung International Patent and Law Firm.

According to him, patent lawsuits are not a war of attrition but a process of technological innovation. He continued, "Technological power is shifting from manufacturers to consumers and it is evidenced by the fact that user experience and design have been treated more importantly in the suits than technical patents."

If anything, we can see that Koreans haven't stopped talking about Samsung's loss to Apple. They're trying to put as much spin on it as possible as we pointed out again in our other report this morning. But they're also honestly questioning the very way that Korean firms do business around the world and are at least acknowledging that building a brand via trade dress is something foreign to them.

The Korean Times reported earlier in this month that "The concept of trade dress may not be familiar to most Koreans, but the lesson it teaches domestic companies is nothing new. The Apple vs. Samsung case is another reminder that Korean firms need to build strong brands and design should help create brand identity." The article is worth reading just to understand how the marbles are moving around in their head on this issue.

On Another Note: Is There Trouble in Android Paradise?

In other Asian news today, DigiTimes is reporting that Google's opposition to Taiwan-based vendor Acer's launch of the A800, a smartphone based on the Alibaba-developed operating system Aliyun, reflects Google's attempt to check development of modified Android platforms, but if Google cracks down on this, developers of modified Android platforms may be forced to offer own-brand smartphones or tablets and give up on Android, resulting in an increased split in the adoption of Android, according to Taiwan-based handset supply chain makers. If the news is now beginning to ripple throughout Asia, it could very well mean that this rift is growning quicker than most think. Time will tell.