Apple's iWallet is Inevitable, NFC or Not 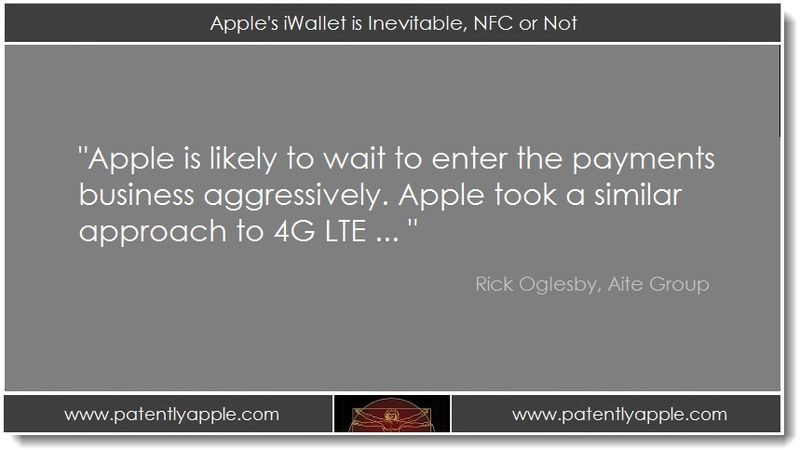 Rick Oglesby of consulting firm Aite Group weighed in as to why Apple passed on including NFC into their latest iPhone-5. "Apple is likely to wait to enter the payments business aggressively. Apple took a similar approach to 4G LTE wireless technology – waiting until coverage was wide enough this year to unveil an iPhone that uses it." He added that "They won't do something until they know a lot of their customers will use the service."

Like many new technologies, NFC is hampered by a chicken-and-egg problem. Mobile phone makers like Apple are reluctant to take on the extra cost and engineering effort of embedding NFC chips because many merchants can't accept payments this way yet. Meanwhile, merchants won't install NFC until more consumers have the technology on their phones.

Many digital wallets have already been developed by companies including eBay's PayPal, Google and Visa. These wallets aim to bring together credit and debit cards, bank accounts, loyalty cards, rewards and coupons in one place, letting shoppers pay for purchases mostly online, but increasingly in physical stores too.

"Isis has placed a massive bet on NFC," said David Evans, founder of Market Platform Dynamics and an adviser to companies in the payments business. Apple's decision "is another reason to believe that Isis doesn't have much promise of getting off the ground."

It would appear that electronic wallets have several issues yet to be ironed out before it takes off as a viable alternative to the credit card. We also don't understand some of the politics being played out by the carriers behind Isis.

In May it was reported by Finextra that despite securing licensing agreements with all of the major card schemes, Google has struggled to win bank, carrier, and merchant support for the project beyond the initial launch partners of Citi and Sprint. Minimal device and terminal support for the wallet has also stalled momentum, while the steady departure of many members of the original launch team has pointed to deeper strategic problems.

Google has reportedly considered sharing revenue generated from mobile payments with carriers, in a bid to get them to support the Wallet but as of today, nothing has been agreed to.

Even though there are ongoing issues, that won't stop Google in pushing the electronic wallet into the market because the concept is inevitable and Google doesn't want to miss out on this revolutionary shift in consumer transactions. Below you'll find Google's August 2012 video promoting Google Wallet.

The iWallet is Inevitable

In a recent patent about connector cables, Apple lists out the known technologies such as USB and Micro-USB, but then states "or any other standard or proprietary interface." Until Apple brands it, such as "Lightning," it's difficult to identify a new proprietary interface in a patent application.

Yet at the end of the day, whether Apple uses NFC, TransferJet or a newly invented proprietary interface, the iWallet isn't in question. Phil Schiller's recent statement concerning NFC doesn't alter Apple's plans for a future iWallet. What technology Apple finally decides on for their future iWallet is irrelevant to the actual services that it will provide. And though the electronic wallet is a political football at the moment with US carriers, the iWallet isn't in question. At the end of the day: The iWallet is inevitable. For the iWallet, it's just a matter of market timing – and for consumers, that's all that really matters.

So what ? Everybody is betting on nfc, trying to make it happen more quickly and apple just seat and wait for the others to make it a standard ?
It's neither blueray vs hddvd nor HTML5 vs flash competition !! NFC is not an old technology and nothing else actually can compete with. Sony's TransferJet technology ? Even if it's better, it's actually unknown to the public and remember Betacam vs VHS, the one who won wasn't the best because others had yet made their mind with vhs!

Apple had the chance to make it a real standard, they chose to wait and see, too proud or too hesitant to rally the others. The risk is to simply follow instead of leading the technology.