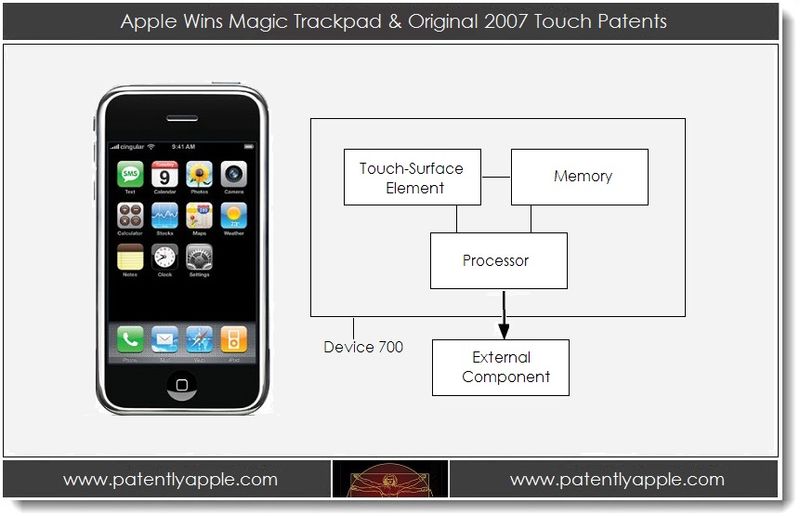 The US Patent and Trademark Office officially published a series of thirty-four newly granted patents for Apple Inc. today. In our first granted patent of the day, we focus on Apple's latest granted patent relating to one of the original 2007 iPhone touch technology patents. This type of touch related patents could potentially be used in future litigation. This particular patent relates to methods and devices that identify and discriminate multiple simultaneous hover or touch events such as, for example, two or more closely grouped fingers, palm heels from one or more fingers, fingers from thumbs, and fingers from ears and cheeks. Our report also covers a design win for Apple's Magic Trackpad along with links to another eleven utility patents worth noting.

Apple has received a granted patent for another original 2007 iPhone touch technology relating to Irregular Input Identification. Apple's awarded '727 patent includes the clams of U.S. Pat. No. 6,323,846, issued 27 Nov. 2001, entitled "Method and Apparatus for Integrating Manual Input" by W. Westerman and J. Elias and which is hereby incorporated by reference as well. 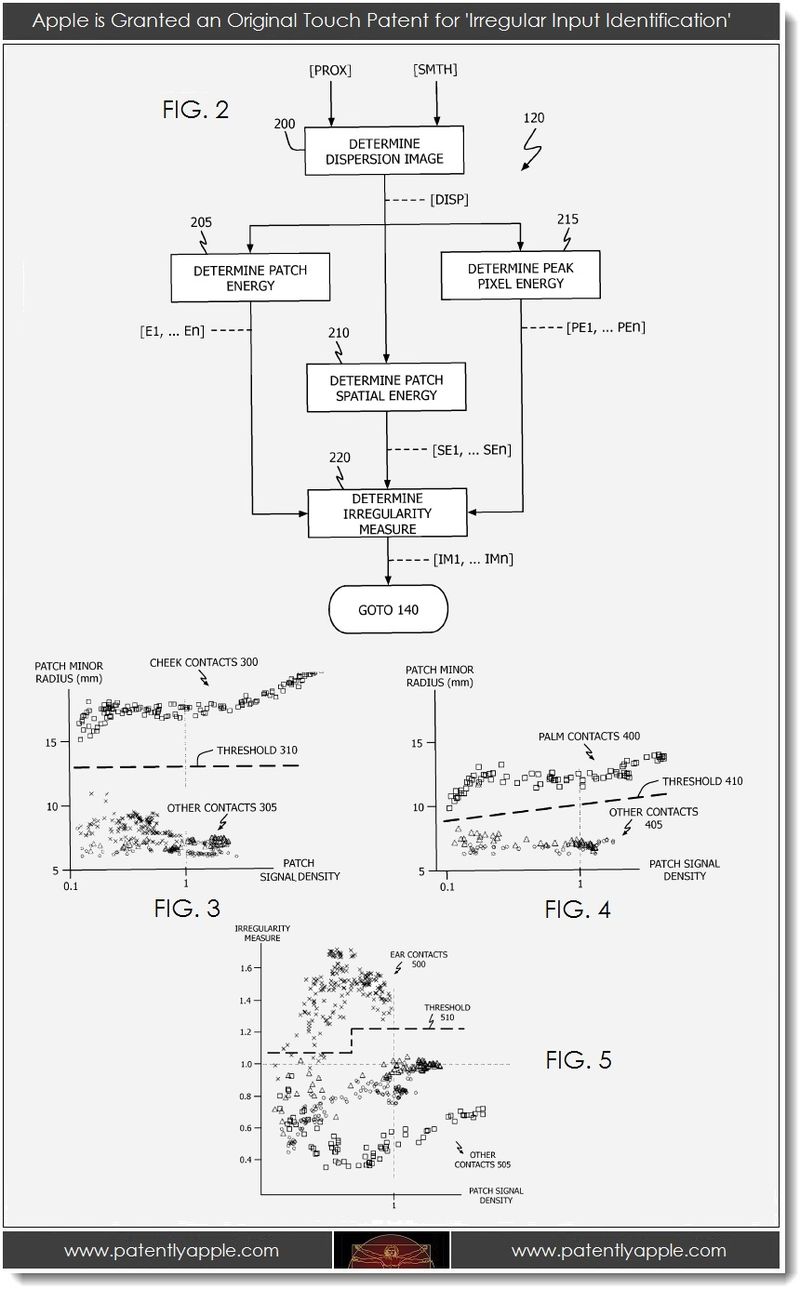 In 2007 Apple stated that "There currently exist many types of input devices for performing operations with an electronic system. These operations often correspond to moving a cursor and/or making selections on a display screen. Illustrative electronic systems include tablet, notebook, desktop and server computer systems, personal digital assistants, audio and video control systems, portable music and video players and mobile and satellite telephones. The use of touch pad and touch screen systems (collectively "touch-surfaces" has become increasingly popular in these types of electronic systems because of their ease of use and versatility of operation.

One particular type of touch-surface is the touch screen. Touch screens typically include a touch panel, a controller and a software driver. The touch panel is characteristically an optically clear panel with a touch sensitive surface that is positioned in front of a display screen so that the touch sensitive surface is coextensive with a specified portion of the display screen's viewable area (most often, the entire display area). The touch panel registers touch events and sends signals indicative of these events to the controller. The controller processes these signals and sends the resulting data to the software driver. The software driver, in turn, translates the resulting data into events recognizable by the electronic system (e.g., finger movements and selections).

Unlike earlier input devices, touch-surfaces now becoming available are capable of simultaneously detecting multiple objects as they approach and/or contact the touch-surface, and detecting object shapes in much more detail. To take advantage of this capability, it is necessary to measure, identify and distinguish between the many kinds of objects that may approach or contact such touch-surfaces simultaneously. Prior art touch-surface systems (including their supporting software and/or circuitry) do not provide a robust ability to do this. Thus, it would be beneficial to provide methods and devices that identify and discriminate multiple simultaneous hover or touch events such as, for example, two or more closely grouped fingers, palm heels from one or more fingers, fingers from thumbs, and fingers from ears and cheeks."

In Apple's Summary they state that the invention provides a method to process a proximity image from a multi-touch touch surface. The method includes obtaining a dispersion image having a plurality of pixels, determining an irregularity measure value for the dispersion image and controlling the operation of a multi-touch touch-surface device if the irregularity measure value is above a specified threshold. In one embodiment, the irregularity measure is determined for the entire proximity image. In another embodiment, an irregularity measure is determined for one or more regions within the image (e.g., patches). Device control may be manifested through, for example, changing the device's operating mode (e.g., off to on) or ignoring the identified irregular object so that it does not cause a change in the device's operating state.

Apple has been granted four design patents today covering their Magic Trackpad and three iPod designs including the iPod Classic, the second generation nano and the third generation nano. 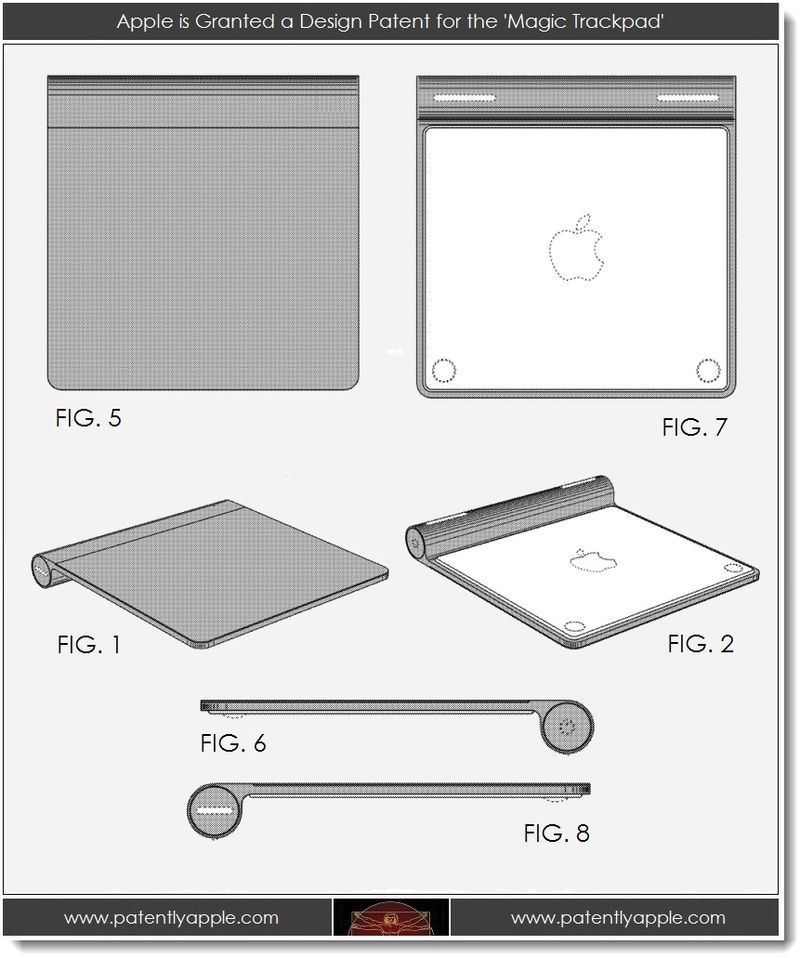 8,271,445 - Storage, organization and searching of data stored on a storage medium