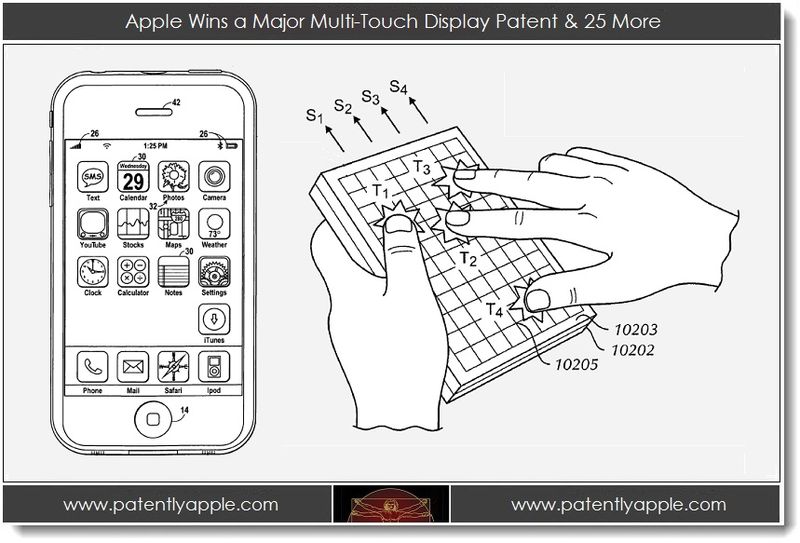 The US Patent and Trademark Office officially published a series of twenty-six newly granted patents for Apple Inc. today which covers a lot of ground including the advancement of the MacBook's housing, cellular wireless communication systems, location technology and more. One of the most important granted patents of the day relates to the multi-touch display technology used in the original iPhone and beyond.

As described in the applications incorporated by reference, a touch surface, and specifically, a multi-touch capable transparent touch surface can be formed from a series of layers. 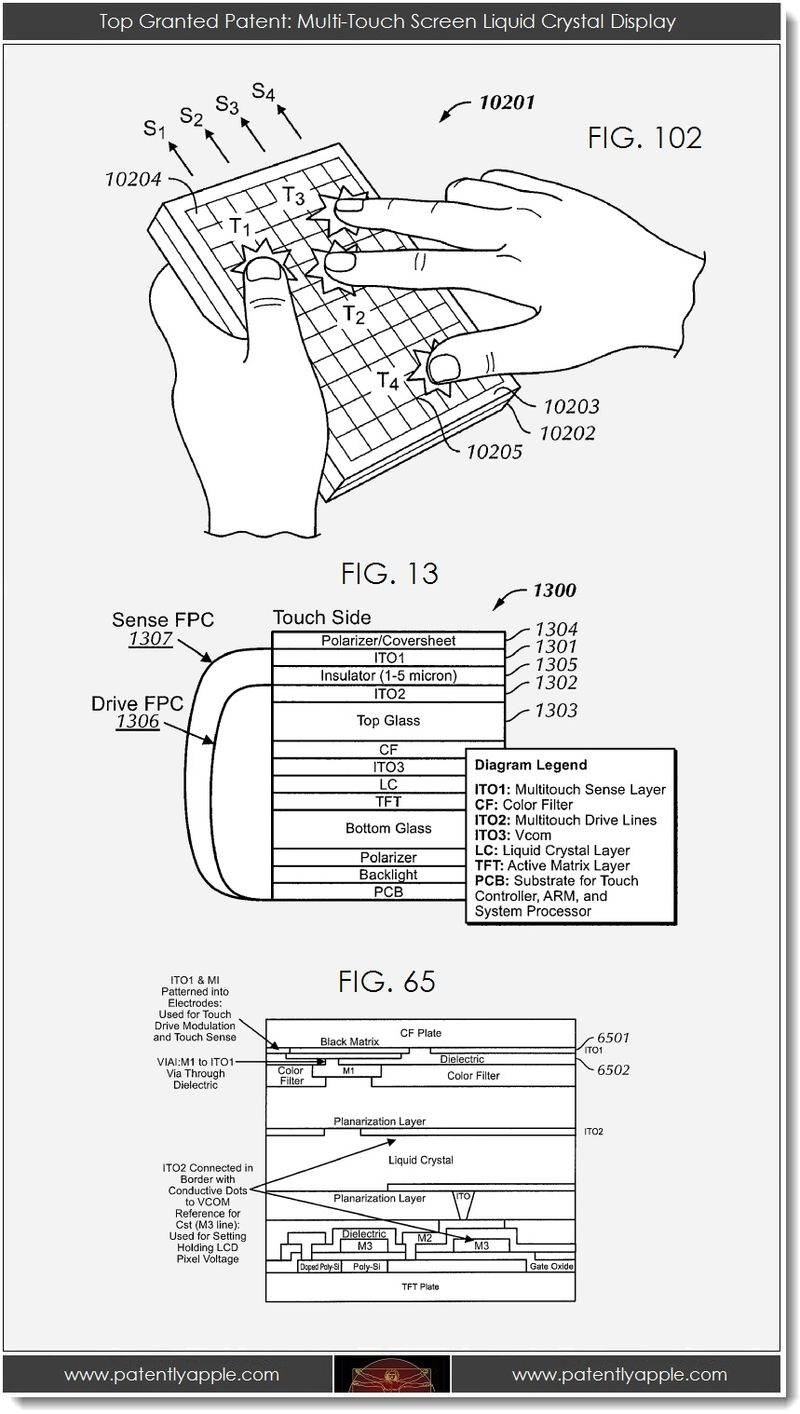 Other patents that were granted to Apple today by the U.S. Patent and Trademark Office include the following:

1. Video Acquisition with Processing based on Ancillary Data

Apple's Patent 8,260,079: Systems and techniques for processing sequences of video images involve receiving, on a computer, data corresponding to a sequence of video images detected by an image sensor. The received data is processed using a graphics processor to adjust one or more visual characteristics of the video images corresponding to the received data. The received data can include video data defining pixel values and ancillary data relating to settings on the image sensor. The video data can be processed in accordance with ancillary data to adjust the visual characteristics, which can include filtering the images, blending images, and/or other processing operations.

Apple's Patent 8,259,737: Wireless gateway nodes are enabled to support mobile node services, such as content based billing, when a data treatment server is present in the system. Using one of a defined Content Flow Label (CFL), an Application Program Interface (API), and a compression protocol header, content based billing is provided such as by exchanging content and byte count information with the data treatment server.

4. Apparatus and Methods for Managing Access and Update Requests in a Wireless Network

Apple's invention relates generally to the field of wireless communication and data networks. More particularly, in one exemplary aspect, the present invention is directed to methods and apparatus for managing a heavy influx of radio network access attempts (such as those generated by a plurality of self-managing user devices accessing a cellular network within a brief period of time), so as to manage the processing burden on the network.

Apple's Patent 8,259,659: Methods and apparatus that enable a wireless network to detect and manage impending congestion events caused by a plurality of mobile devices attempting to access the network in a brief space of time. In one embodiment, the network comprises a 3g (UMTS) cellular network, and includes a congestion management and avoidance entity that preemptively triggers a collision mode upon detecting an impending congestion event. This mode advantageously reduces processing burden on the base station by causing the mobile devices (UEs) to halt current access attempts, and invoke a multiple access scheme (e.g., wait a random amount of time before attempting further access attempts). The comparatively early detection and avoidance of collisions reduces the mobile device's power consumption, while addressing congestion events early in the wireless communication process so as to maintain optimal network conditions.

6. System and Method for Peer-to-Peer Communication in Cellular Systems

9. Variant Streams for Real-Time or Near Real-Time Streaming to Provide Failover Protection

Apple's Patent 8,260,877: Methods and apparatuses provide real-time or near real-time streaming of content using transfer protocols such as an HTTP compliant protocol. In one embodiment, a method includes providing multiple redundant locations that provide media content to client devices using alternative streams. To implement failover protection, a first server device or first content distribution service creates a stream, or multiple alternate bandwidth streams and generates playlist file(s). A second server device or second content distribution service creates a parallel stream, or set of streams. A client attempts to download the playlist file(s) from a first uniform resource locator (URL) using a first stream associated with the first server device or the first content distribution service. If a client is unable to download the playlist file(s) from the first URL, the client attempts to switch to an alternate stream associated with another URL.

13. Methods and Systems for Managing To Do Items or Notes or Electronic Messages

Apple's Patent 8,261,197: Apple's patent relates to methods and systems for managing To Do items and/or notes and/or emails (or other electronic messages). On exemplary method includes receiving an input to create a To Do item based on a portion of an email record, such as a received email, and creating, in response to the input, the To do item. Another exemplary method includes storing a note having a To Do item in the note, the note being stored as an entry in a note database which is separate from a To Do database and storing the To Do item in the To do database and receiving an input within either a note view or a To Do view to edit the To Do item and causing the note to be edited and causing the To Do item to be edited in response to the input.

15. Method and System for Dynamically Populating Groups in a Developer Environment

Apple's Patent 8,261,159: Apple's patent relates to a method for data storage which includes defining a set of scrambling sequences, each sequence including bits in respective bit positions having bit values, such that a distribution of the bit values in any give bit position satisfies a predefined statistical criterion. Each data word is scrambled using a respective scrambling sequence selected from the set. The scrambled data words are stored in the memory device.

18. Housing for a Computing Device: MacBook

Apple's Patent 8,256,913: An improved housing for a computing device is disclosed. The improved housing is provided with one of an illuminable connector, a touch pad arrangement, and a palm rest stiffening plate. Normally, the illuminable connector and the touch pad arrangement are provided on external portions of a housing of the computing device such that they are available for user interaction. The palm rest stiffening plate is provided internal to a housing to provide stiffness or rigidity to a palm rest region of the housing. The last round of granted patents issued today by the U.S. Patent Office include: (8,259,652) Location-based network detection; (8,259,506) Database of memory read thresholds; (8,259,497) Programming schemes for multi-level analog memory cells; (8,259,198) System and method for detecting and correcting defective pixels in an image sensor; (8,259,139) Use of on-chip frame buffer to improve LCD response time by overdriving; and finally (8,259,017) Hybrid antennas for electronic devices.