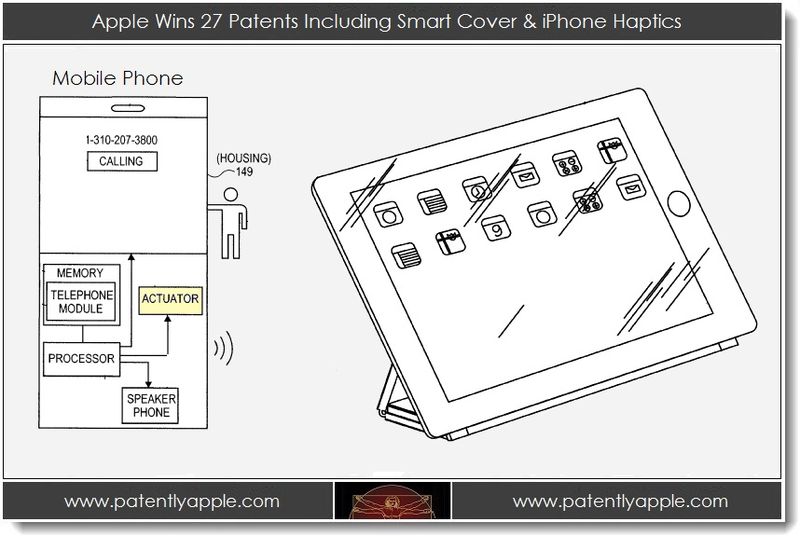 The US Patent and Trademark Office officially published a series of twenty-seven newly granted patents for Apple Inc. today. In our second granted patent report of the day we focus on three patents. The first is Apple's third Smart Cover win, the second covers Apple's iPhone haptics the last one covers the iPhone's cover assembly. To round off our report, we list an additional nine granted patents with some interesting ones worth exploring.

Apple is granted their Third Patent for the iPad's Smart Cover

Apple has received a Granted Patent that relates to their iPad's Smart Cover. The invention describes various releasable attachment techniques well suited for portable electronic devices. The title of the patent is "Accessory Device for Peek Mode."

Apple's patent states that the magnetic attachment mechanism could be used to releasably attach at least two objects together in a preferred configuration without fasteners and without external intervention. The accessory device could be used to augment the functionality of usefulness of the iPad. 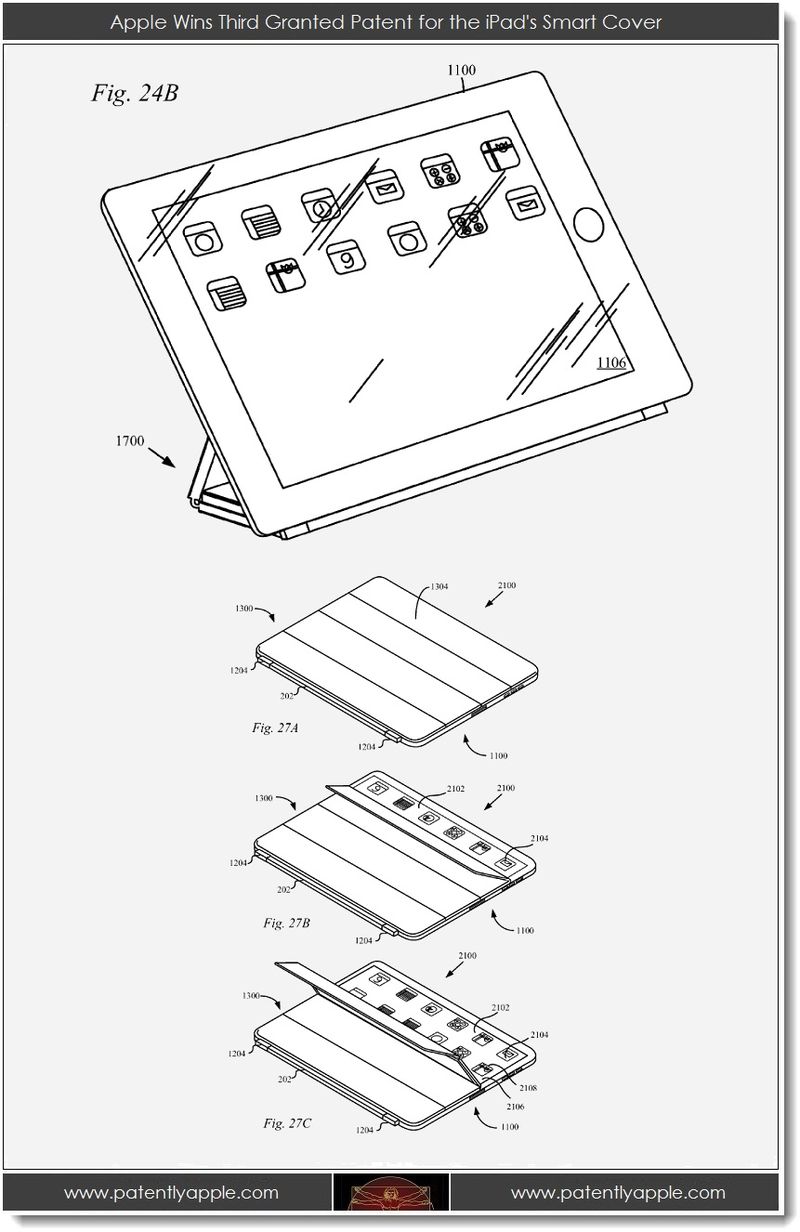 Apple has received a Granted Patent that relates to how the iPhone interacts with its user when the user is making an outgoing telephone call. During the making of an outgoing call, the iPhone vibrates in a pulsing manner while the destination phone is ringing. The on/off cycle of the vibration pulse may be synchronized to that of the ring tone, which is being played back simultaneously through the receiver. Apple's patent FIG. 1 shown below is a block diagram of a mobile phone being operated during an outgoing phone call. 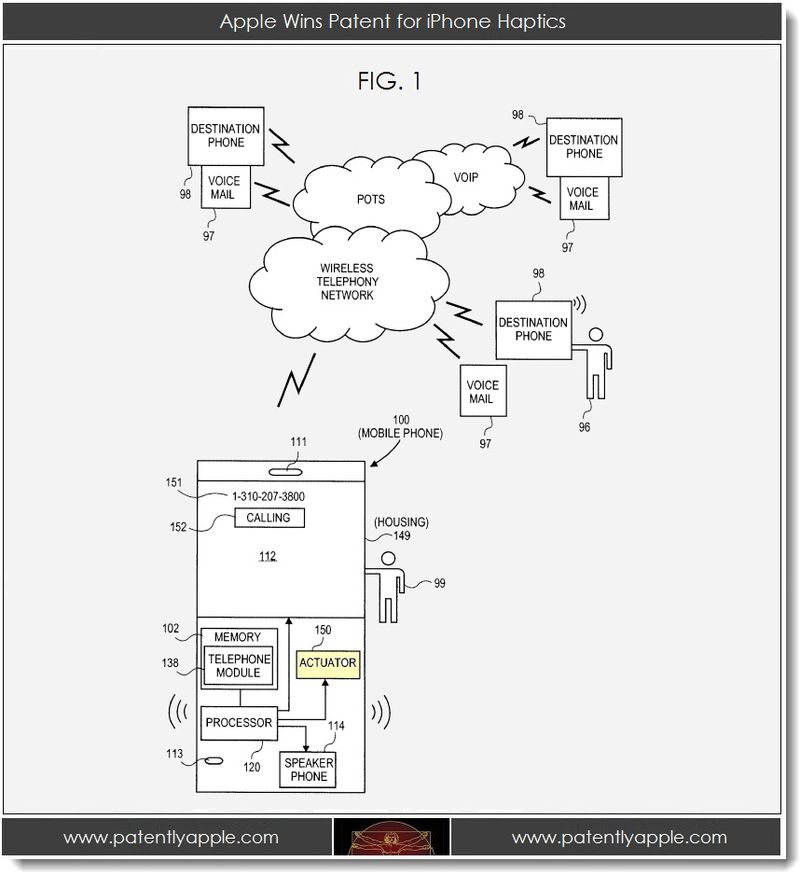 Apple credits Michael Lee, Chad Sequin and Cyril Labidi as the inventors of granted patent 8,265,708 which was originally filed in Q3 2008 and published today by the US Patent and Trademark Office. 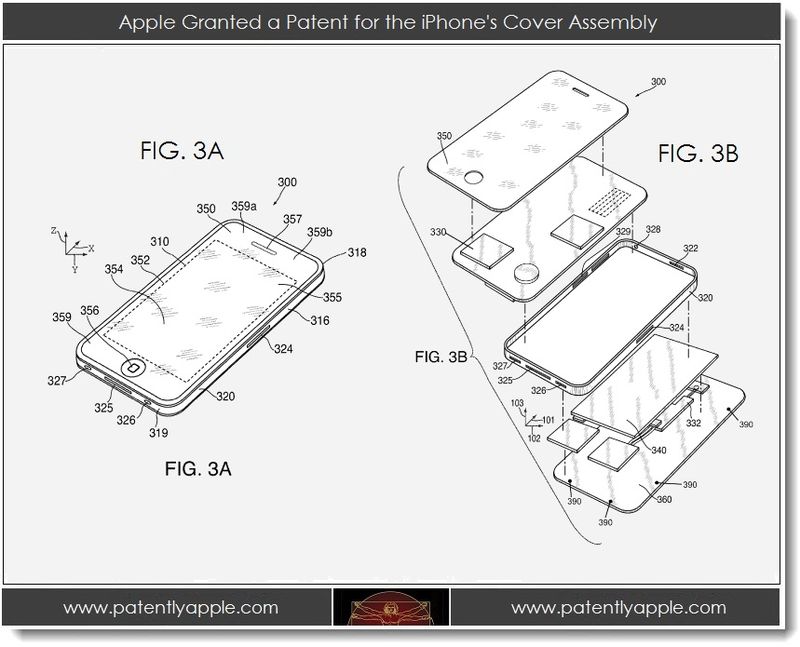 Apple credits David Pakula, Scott Myers, Tang Tan and Richard Dinh as the inventors of granted patent 8,264,837 which was originally filed in Q2 2010 and published today by the US Patent and Trademark Office.

Over and above the granted patents that were specifically reported on today, we present you with links to the remainder of Apple's 27 granted patents in our Final Patent Round-Up of the day as follows:

8,265,300: Method and apparatus for controlling volume

8,265,603: Creation and management of voicemail greetings for mobile communication devices