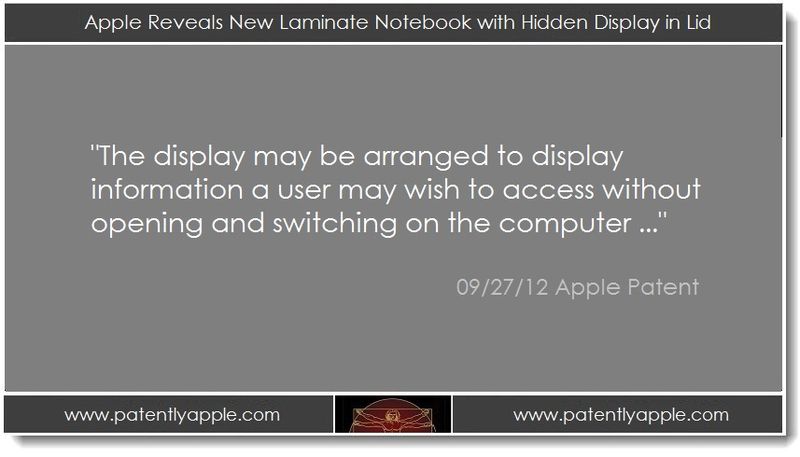 Yesterday we reported on Apple commissioning the production of a mysterious fiber carbon product. We were the only source to point out that Apple was also working on "glass" and/or "carbon" fibers for products ranging from the iPhone to a notebook. Today, Apple revealed information about a new notebook product entry that will have a laminate cover that would conceal a hidden camera and mini display on the backside of said notebook. The display won't be visible until it lights up when the user's hand hovers over it. It's simple a fascinating idea - more so because it could lead to an all-new product from Apple.

Getting to the heart of a new notebook product that Apple is considering, they provide us with an example embodiment as is illustrated in patent FIG. 4 below. In this example, the concealing structure is used on an external surface, completely independent of the laptop display. The computer 400 is of typical clamshell construction, comprising a base (not shown) and a lid 406 which are hingedly connected together for operation between an open condition in which a display screen on the inside of the lid is visible, and a closed condition shown in FIG. 4. The computer includes an auxiliary hidden display 410 on the outside surface of the lid adjacent a rear edge of the computer 400. The mini display comprises an array of colored LEDs mounted in a recess 418 in the lid. 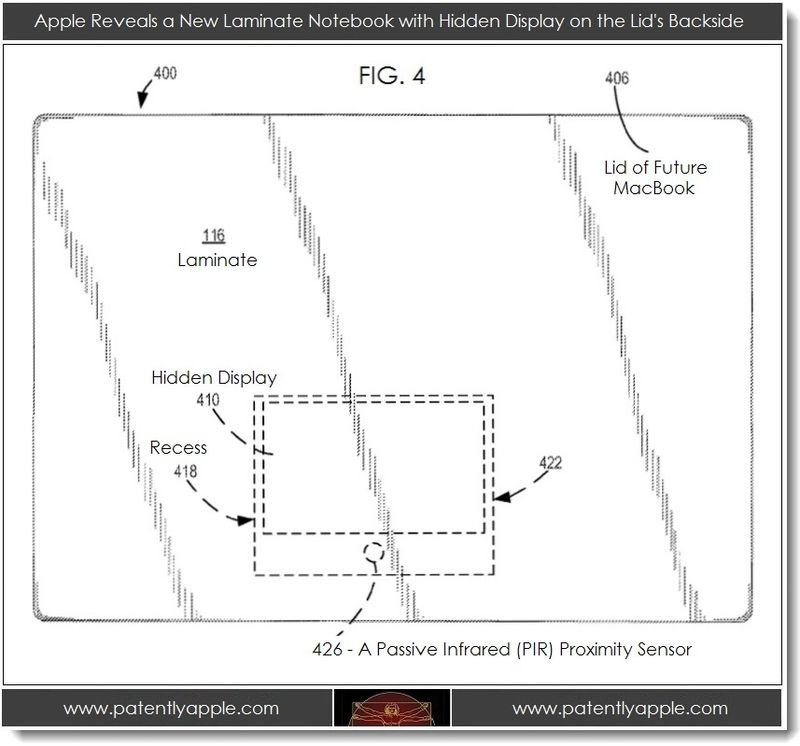 Apple reveals that a laminate extends over the back surface of the lid providing an operatively outer surface for the lid. In this embodiment, the laminate extends continuously over the entire back of the lid, to provide a continuous flat surface. A frame member provided by a layer of black ink in the laminate defines a rectangular aperture 422 aligned with the mini display to allow the passage of light through the laminate when the display is activated and emits light. A further optical component in the form of a passive infrared (PIR) proximity sensor 426 is mounted in the recess 418.

The mini display may be connected to the proximity sensor to automatically activate the mini display in response to sensing of the presence of an object such as a human hand. The presence of the recess and its optical components are visually obscured when the mini display is inactive, due to the trapping of light by operation of the linear polarizer and the wave plate forming part of the laminate.

Apple states that the aperture will therefore emit no or little light and appear black, thus being indistinguishable from the black appearance of the notebook's lid provided by the layer of black ink so that the lid of the notebook has an unbroken black appearance. However, when a user brings a hand close to lid its presence is sensed by the proximity sensor and the auxiliary mini display is automatically activated.

The display may be arranged to display information a user may wish to access without opening and switching on the computer, such as, for example, information regarding a user's e-mail account, when the display is implemented to indicate, for example, a number of unread e-mail messages.

Apple states that the laminate construction could be applied to other products such as the iMac, mobile phones and touchscreen tablets. Yet Apple states that they could extend its application to a much broader range of products including electronic devices beyond consumer electronics and computer fields such as medical devices, automotive applications (for example to provide masked indicators on a vehicle dashboard) and beyond.