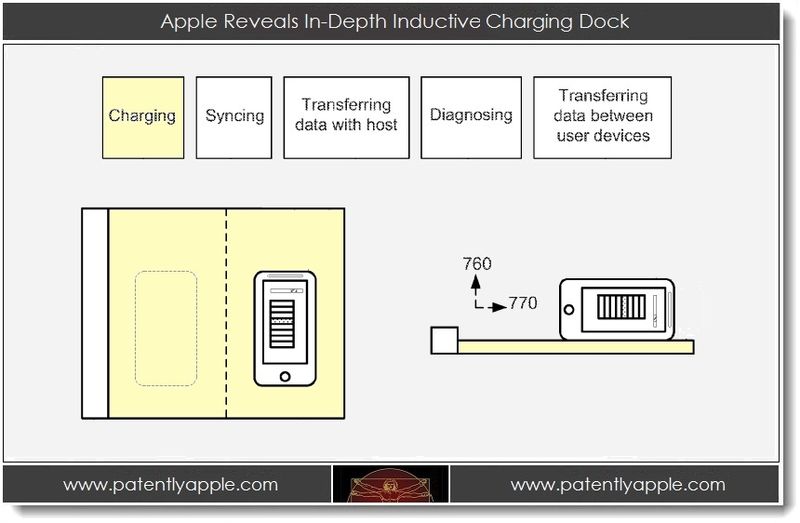 Many times in the past Steve Jobs had said that Apple had no interest in phones or tablets and thought that network computers were silly with this concept of data residing somewhere in a cloud in the sky. Everything that he said that Apple had no interest in eventually came to be. After Apple's special iPhone 5 event earlier this month, Phil Schiller tried to do the same thing in respect to wireless inductive charging. Was his "marketing speak" just another head-fake? Well, according to a new patent published by the US Patent and Trademark Office, Apple's engineers never got the memo on Apple not being interested wireless inductive charging. In fact the crazy ones in Cupertino hit a home run with a winning in-depth inductive charging dock this time around. This design doesn't have a funny-funky pole like past designs. No, this one has some pretty interesting twists and will come with a handy user interface and much, much more.

Apple's patent FIG. 1 shown below presents an illustrative docking arrangement 100 which may include user device 120 (e.g., a personal communications device) and user device 130 (e.g., a digital camera) positioned on surface 152 of docking device 150. The devices in patent FIG. 1 are shown to facing up on the dock and in FIG. 2 the devices are shown to be facing down. 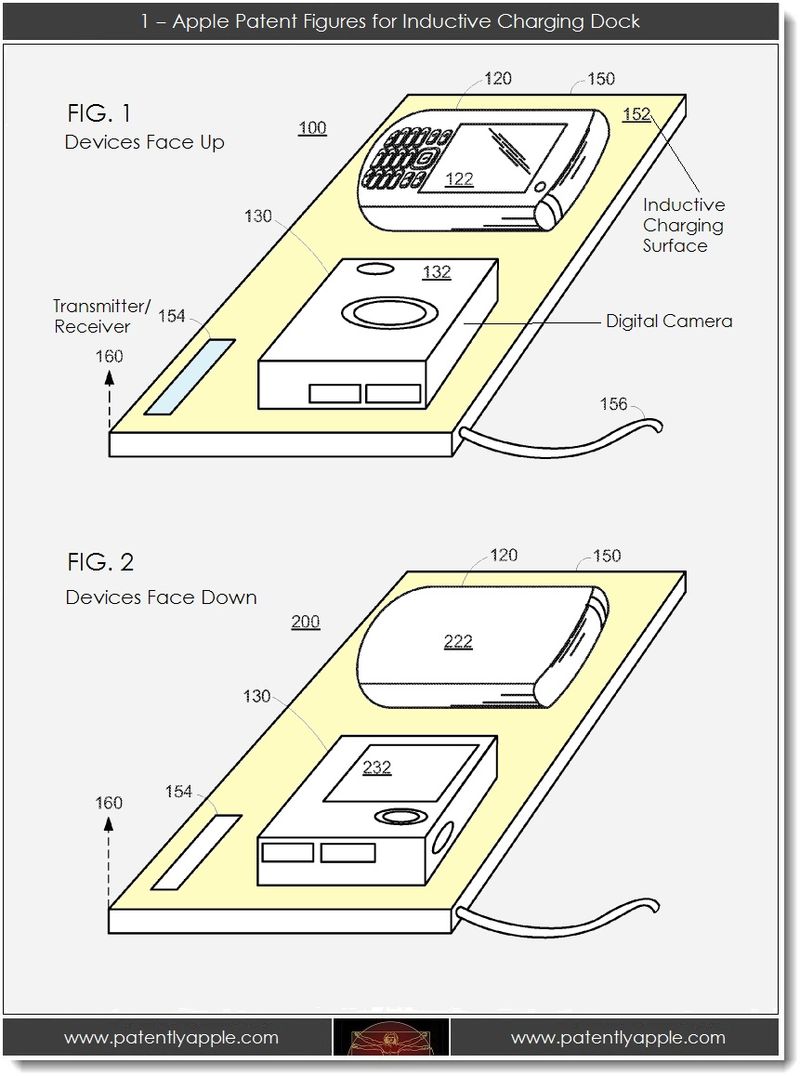 In patent FIG. 3 shown below Apple notes that surface 352 may be partitioned into any suitable number of regions ("zones"), in any suitable configuration. For example, surface 352 may include multiple regions in the shape of concentric circles. In a further example, the same surface may include a grid of multiple partitions which may intersect, forming an array of regions. 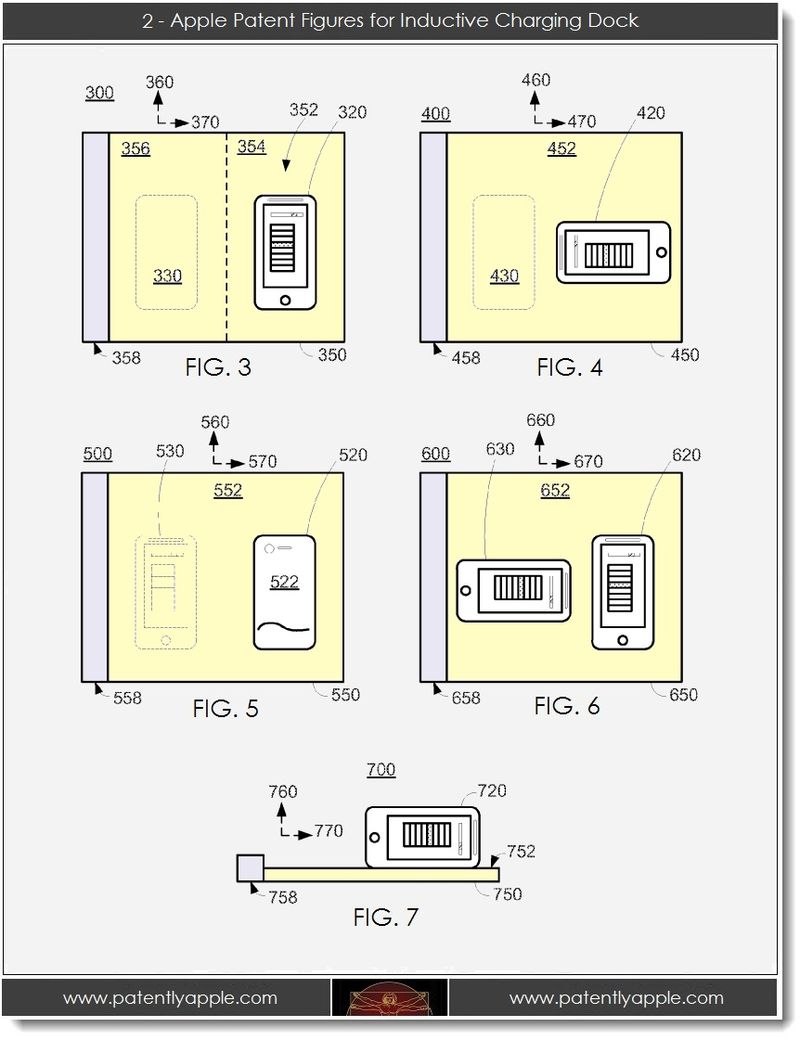 In respect to patent FIG. 4, Apple states that depending upon the translational position, rotational position, or both of user device 420, one or more particular docking functions may be provided to the user device. For example, when user the device 420 is physically oriented along (e.g., rotationally positioned along) direction 460 (in a vertical position), inductive charging may be provided to the user device. Note that in patent FIG. 5 we simply see that inductive charging taking place when the devices facing down as well.

In a further example, when the user device is physically oriented along (e.g., rotationally positioned along) direction 470 (in a horizontal position) the data synchronization may be provided between the user device and the docking device 450.

In a further example, when user device is physically oriented at (e.g., translationally positioned at) position 430, a diagnostic check of user device 420 may be performed.

The Dock's Intelligent Side Bar

A segment may be coupled to a surface in any suitable manner (e.g., wired, wireless, optical, mechanical), or may be integrated with a surface in any suitable manner. For example, segment 358 of patent FIG. 3 noted above may include one or more optical sensors (e.g., line of sight sensors/detectors, imaging detectors, IR detectors) for determining a physical orientation of user device 320 when placed on surface 352.

In a further example, segment 458 may include one or more tactile sensors (e.g., piezoelectric, capacitive, resistive) integrated into surface 452, which may detect a physical orientation of user device 420 on surface 452. In a further example, segment 558 may include an I/O interface such as a USB port configured to communicate via a wired cable with a host computer, which may provide one or more docking functions (e.g., data synchronization via WiFi network) to user device 520.

Apple's patent FIG. 14 noted below is a diagram of an illustrative docking arrangement including a user device coupled to a docking device, and other devices. 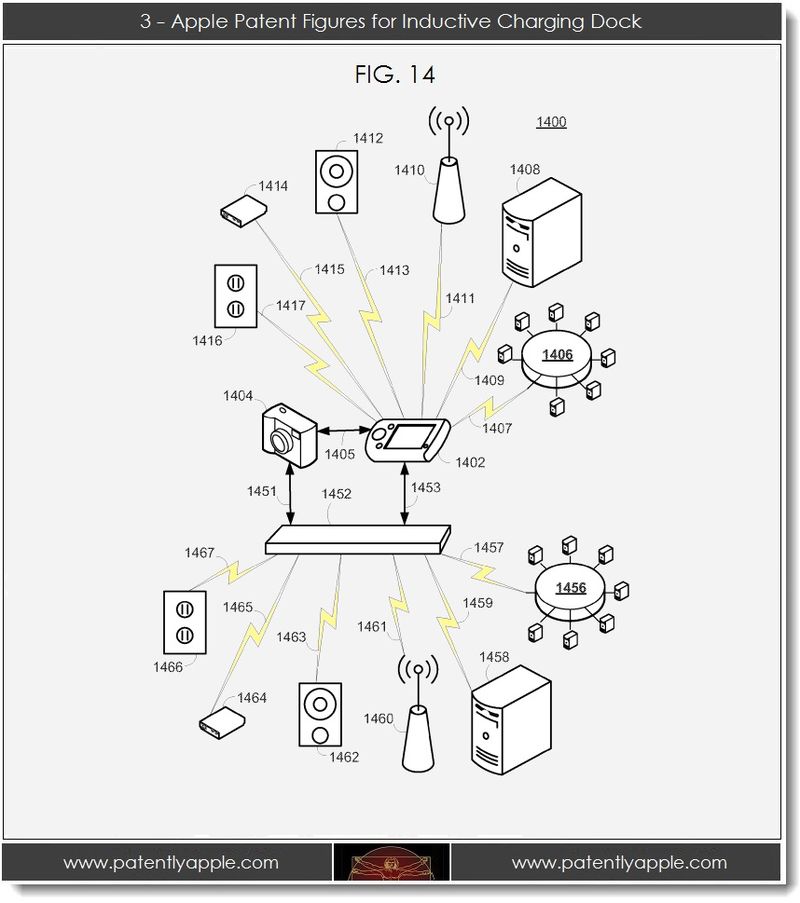 Apple's patent application filed under serial number 072577 was originally filed in Q1 2011 and published today by the US Patent and Trademark Office. It should be noted that Apple has already been granted a patent for another inductive charging dock design.

Note to Referring Sites: We ask that referring sites limit the use of our graphics to that of a single graphic and that you leave our identification on that graphic. Thanking you in advance for your cooperation.

Every time a new Apple device comes to market, the friendly wackos come out to play. It could be to smash, stomp or shoot an iDevice just because they think it's cool. Well, we shouldn't be surprised that someone has now tested a new iPhone 5 in a microwave. Their use of the word "Tested" isn't really accurate. It's more like "Watch an iPhone 5 Burn and stay in Tact" video. Although it's crazy, it's even crazier that I have to say this, but for legal reasons I must: Don't attempt to duplicate what you see in the video. Do not try this at home or anywhere under any circumstance.

Posted by Jack Purcher on September 27, 2012 at 05:32 AM in 1A. Patent Applications, Apple Accessories, Wireless technologies, Satellite | Permalink | Comments (0)