Yesterday the World IP Organization published a host of unique patents relating to flexible displays. Once you hear the words "flexible displays" your mind immediately conjures up all kinds of contorted smartphone designs because that's what the competition, like Samsung, have been promoting for some time now at tradeshows. And being a hardware centric company, you expect that from them. Yet Apple is a different cat. They're the guys who Think Different, remember? So while the competition is stuck in hardware overdrive, Apple is working diligently at finding unique ways to exploit flexible displays. That's really what yesterday's patents revealed once you got through the camouflage of concave and convex display detailing. Our report shows you a few of the little gems that came to light.

The flexible display may have an active area that is configured to display images to the user. Speaker membranes may be formed from the active portion of the flexible display. The display-based speaker structures may be driven by transducers that receive and electrical audio signal input from circuitry in the electronic device. Piezoelectric transducers or transducers formed from coils and magnets may be used to drive the display-based speaker structures. One or more holes such as holes or "speaker openings" 464 may be formed in cover layer 462 so that sound my pass from speaker 448 to the exterior of the device.

Apple's patent entertains the use of 2, 3 or 4 speakers built into the flex displays depending on the size of the display. In fact in one embodiment, Apple discusses speaker types that may be used in apparently larger devices such as the iMac or TV as noted above in patent figure 33. The sophistication may involve subwoofers, woofers, mid-range speakers, tweeters, super-tweeters through to surround sound. Imagine the day that surround sound comes out of your cool Apple HDTV while you're watching a movie, playing a video game or simply listening to iTunes without a speaker to be seen. Now that's cool thinking!

In addition to using flexible displays for integrating more speakers into various displays, Apple's mega patent filing also presented a very novel idea. It may be a little gimmicky, but sometimes they could be fun if done right. Basically what they're conveying here is that a future iPad could incorporate an actuator in the corners of the iPad as shown below in patent point # 130. When the user's hand approaches the iPad and Smart Cover, the actuator would sense this and the flexible display would exert a pressure on the iPad's Smart Cover which in turn would lift the cover up just enough for the user to effortlessly grab to open the cover. 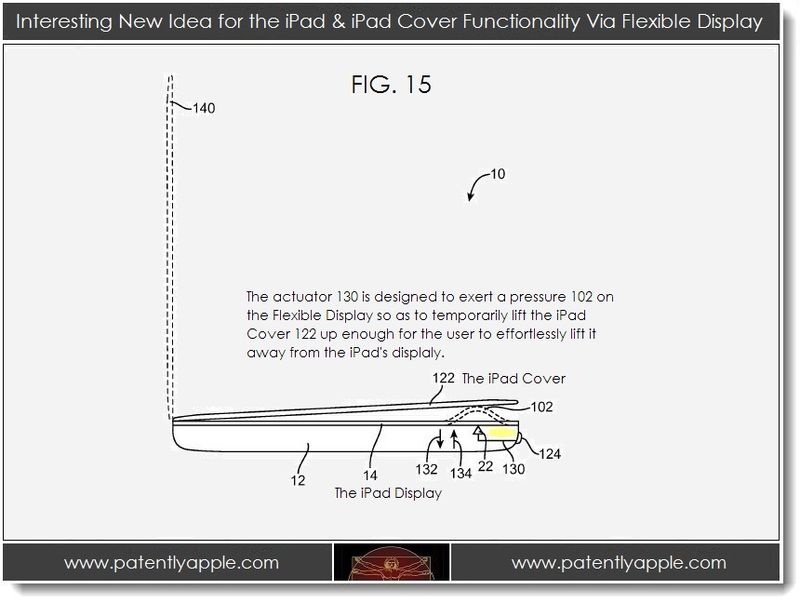 Invisible Buttons that Only Surface when Needed

While this next feature may take years to ever come to market, it's one that I think has real potential to wow consumers. If you view this current patent concept as an island unto itself, then you'll miss the real flavor of what Apple is trying to deliver here. This current concept plays off of other patents that Apple owns relating to smart bezels. Two of my favorites cover smart bezels overall and another for sense lines, though there are plenty more on this topic to review if you wish. The idea that Apple is trying to deliver here is basically to provide consumers with a way to extend iPad or iDevice functionality with invisible buttons that are only available to the user when a specific gesture is made or when a certain app is chosen. The controls will match the app that you've chosen and when you're done, the added controls will disappear when the app is closed. So if you start a game for instance, the related controls will appear in the bezel. It could also work with general functions like calling up email lightning fast without having to go to your home page. As shown in FIG. 12 above, a ridge or other deformation may be used to indicate the location of the button. Throughout this patent, Apple describes the flexible display as one covering the entire face of a device. This means that the black bezel in future iPads, iMacs and MacBook Pros could become interactive areas. See patent figures 33 and 34 where "IA" = Interactive Area.

While Apple Dabbles with Flexible Display Designs, it's not their Focus at the Moment 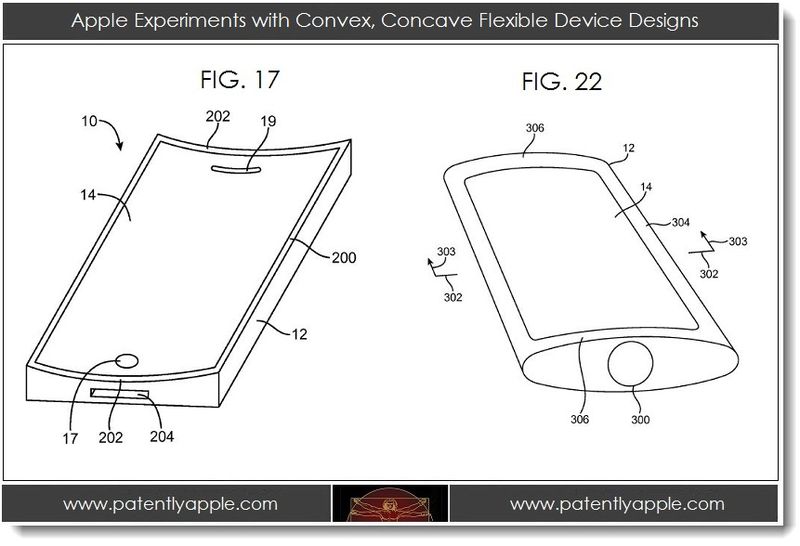 As duly noted in patent figures 17 and 22 above, Apple has dabbled with a few basic flexible display designs that cover a convex and concave display. Yet it would appear at this stage of the game that Apple's engineers are more focused on developing the functional aspects of flexible displays than they are with the esthetics.

During Apple's iPhone-5 event, Apple's VP of Marketing Phil Schiller stated the following as a kick to Samsung: "It is really easy to make a new product that's bigger. Everyone does that. The challenge is to make it better and smaller." Well that same philosophy could be extended through to flexible displays as well. Apple's not looking for flash-in-the-pan design form factors at the moment. No, they're hard at work on a different path which is to find new and fresh ways to add advanced features to their iDevices without marring the simplistic iDevice design (did I get that right, Jony? Ha!).

As a last note: if you carefully look at patent figure 22 above, you might agree with me that it's really an iPod nano fifth generation with an elongated display window. Obviously that idea has already been scrapped by their latest design.

A host of Apple patent applications were originally filed in March of this year and published by the World Intellectual Property Organization yesterday, September 27, 2012. The patents were first discovered by Staska writing for Unwired and it was a great find. I had a lot of fun skimming through these patents for unique applications not covered in their original report.

Note to Referring Sites: We ask that referring sites limit the use of our graphics to a maximum of two per report and that you leave our identification on all graphics. Thanking you for your cooperation.

Posted by Jack Purcher on September 28, 2012 at 05:14 AM in 1A. Patent Applications, Devices, Components, Displays - Flexible, Foldable & Scrollable | Permalink | Comments (0)