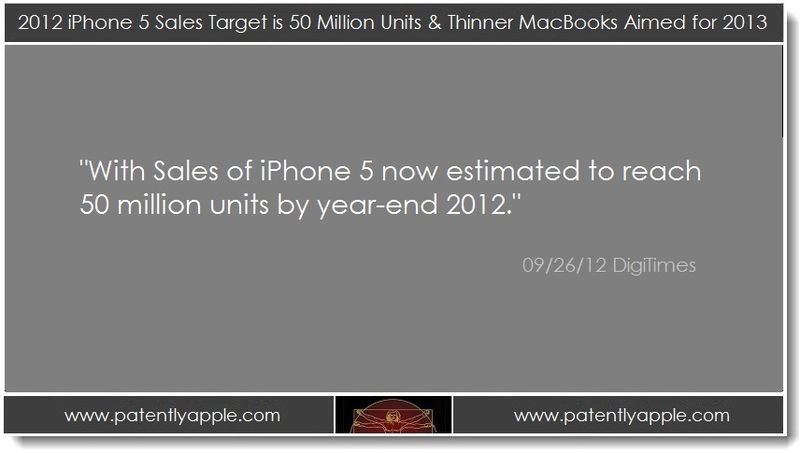 New reports from Taiwan this morning state that updated iPhone order parts indicate that Apple's target for iPhone 5 sales in 2012 is 50 million units. On another front, suppliers point to Apple reducing the thickness of MacBook keyboards in 2013. And lastly, a reason for the Foxconn riots may have surfaced.

A new report out this morning states that Apple originally planned to place IC orders enough for quarterly production of 20 million iPhone 5s in the third and fourth quarters of 2012 but was forced to revise order volumes for the two quarters to 15 million and 25 million, respectively, due to yield rate issues at some component lines.

However, sources at chipset players confirmed that Apple has been ramping up its IC orders for the iPhone 5, with monthly shipments to range from 10-15 million units from September to November. With sales of iPhone 5 now estimated to reach 50 million units by year-end 2012, the sources expect current chipset demand to continue in December and even in the first quarter of 2013.

Apple's Illuminated MacBook Keyboards to be thinner in 2013

Apple will reduce the thickness of light guide plates for the illuminated keyboards in its MacBook Air and MacBook Pro models from 0.4mm currently to 0.25mm in 2013, according to sources in Apple's supply chain.

Were the Riots at Foxconn about Not Being Paid Overtime Related to the iPhone 5?

In a new DigiTimes report this morning we learn that the riots at Foxconn were likely over not being paid overtime. DigiTimes reports: "Foxconn said it will also ensure its duties relating to employee welfare are implemented and it will make over-time payments as promised."

Although Foxconn keeps denying that this had anything to do with the Apple plant, the riot stemming over not being paid for overtime would mean that there's a product in hot demand calling for overtime in the first place. Is there another hot product in the market made at Foxconn that would demand such overtime other than the iPhone 5?

I don't think that "likely" is an answer we can bank on.

CNN's website reported that the workers were likely working overtime on a new Nintendo device.

It would be, ViewRoyal, if it wasn't a question.

How workers are paid for work on Apple products was an issue that was being worked on. I find the timing of the riots tied to an overtime issue open to questions. It's Foxconn's duty to supress news that could impact their bottom line. But it doesn't mean I have to swallow it.

Re: Were the Riots at Foxconn about Not Being Paid Overtime Related to the iPhone 5?