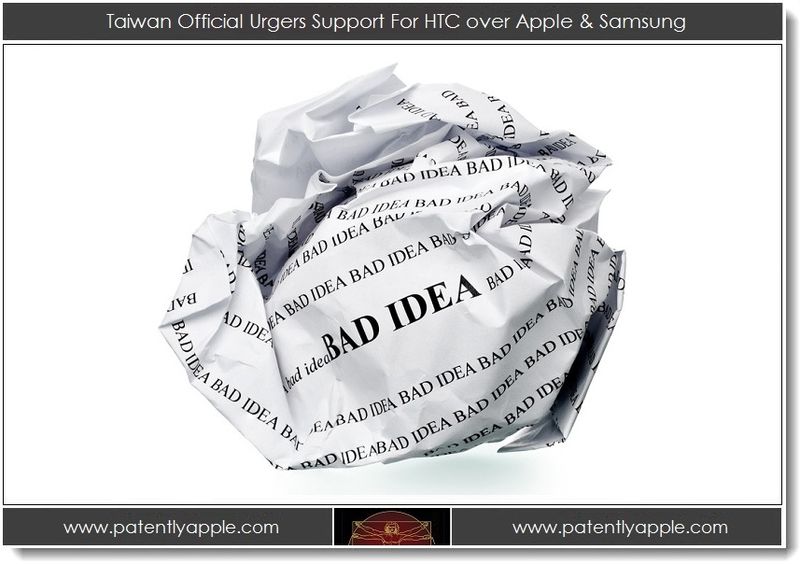 On Friday, Taiwan's Economics Minister Shih Yen-shiang urged the public to show more support for HTC Corp., a Taiwanese smartphone maker. The Minister stated that the "Public should cherish our own brand." The remarks came after HTC released their revenue report amid fierce competition from Apple and Samsung. The Taiwanese government is now working on providing a better environment and offering assistance to Taiwan's smartphone makers, including integrating industry supply chains, launching an application processor development project and more, according to the Minister. In October of 2011, the Premier of Taiwan took a swipe at Apple due to their patent victory for slide and lock. Considering the tremendous amount of business that Apple is giving to Taiwan's Hon Hai (Foxconn), is it right for their Government to be playing up nationalistic sentiments against Apple? Is it right to be championing HTC over Hon Hai when Apple and HTC are still battling it out in court? You don't hear the Canadian Government whining to their citizenry that they should be supporting their cherished RIM over their US competitors Apple and Google, do you? I don't know, maybe it's just me – but I think that Taiwan's mouthy government should be a little more grateful for the business that North American companies are giving them instead of whining in public to stir up nationalism. It's a bad idea and worst yet, bad policy. What are your thoughts on this?

Also Take a Look at our Latest Patent Bolt Report

Are you reading another report? I don't mention bringing jobs back to the US. You missed the point entirely.

Hey Stanluca, not everyone has a University degree that will gain them a high paying job.Don't judge people, you say? I think that your comment about dirty Jobs is a slight to those wanting any job to make a living. Millions of Americans would take a dirty job because it's a job. You're a little judgemental snot in my view.

Don't judge people and stop saying that we need to bring manufacturing back to the US. We have manufacturing. We need to keep on doing what we are doing and dominate in service, high paid tech industry like Apple, Google, Facebook etc and leave the dirty manufacturing jobs overseas.

Although I appreciate your pro-Taiwanese point of view, I don't happen to share it. When you start using language like "enslave," and associating it with the US companies, I think that you've shown your hand to be that of a Taiwanese nationalist.

If this trend continues with all the manufacturing going to Taiwan, there won't be people wanting to pay the general price of a tablet or notebook because they won't be able to spend money on toys. They'll be too busy putting a roof over their heads. Once people get to a point where they have no job or a minimum wage job, do you think they'll buy any tech toys? Really? The American worker backlash is coming. Count on it. If tech companies see sales plummet because consumers won't buy Made in China products, they'll flock back to the US.

Perhaps right now they do. But the point is whether you want to discuss this issue objectively or from a pro-American, anti-Taiwanese perspective. If the latter, then screw HTC, let American companies like Apple and Google dominate and the rest of the world be enslaved and work for the US for nothing. If the former, it's not difficult to understand why a TAIWANESE politician would prefer a world dominated by TAIWANESE companies and not foreign ones.

It's one thing for a Government to promote a home brand vs creating a supply chain and other programs to ensure that they'll one day have a government sponsored advantage over a company like Apple who had to create their own advantages, supply chain and patents to protect their technology from thieves like HTC. That's the point, Weili.

"Manufacture in USA. Export to the World. Let Taiwan be history. USA is relying too much on China and Taiwan. Sooner or later its going to bite them."

Taiwan is hardly the only country who wants to promote its own brands. "Buy American" sound familiar to you?

Yes, Hon Hai earned the business, Weili, and that's why the Taiwanese Government shouldn't be vocally supporting a "pure" Taiwanese company over one that is doing so well working with Apple. They hire more people than HTC by a country mile.

"Considering the tremendous amount of business that Apple is giving to Taiwan's Hon Hai (Foxconn), is it right for their Government to be playing up nationalistic sentiments against Apple?"

Seriously? You think Apple "gave" Hon Hai aka Foxconn all the business? Do you honestly think if another company comes along who can do the same (or better) job at a lower price Apple wouldn't switch? Hon Hai earned Apple's business by providing a service and price that currently can't be beat.

Bash Apple, who gives them the most business, but ignore the fact that HTC's phones nearly all (if not all) run an OS that's also developed by an American company.

It would be nice for HTC to come out ahead of Samsung. At least HTC isn't the one trying to make their phones and Android look and feel more like iPhones and iPads.

Manufacture in USA. Export to the World. Let Taiwan be history. USA is relying too much on China and Taiwan. Sooner or later its going to bite them.