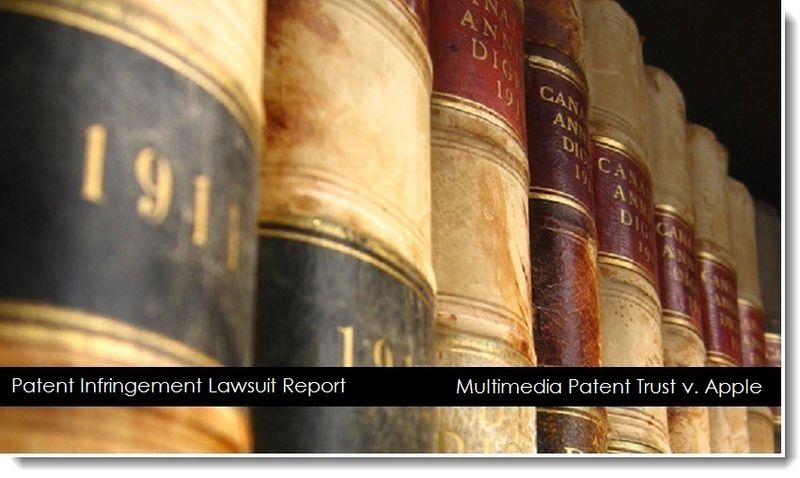 Alcatel-Lucent subsidiary Multimedia Patent Trust has sued many consumer electronics companies and broadcasters over the years including Microsoft, Dell, LG, TiVo, Canon and yes Apple. In this latest patent infringement filing, Multimedia Patent Trust (MPT) focuses their entire case against Apple on three counts stemming from a single patent regarding video compression used in Apple's QuickTime. The law suit has been filed by Quinn Emanuel Urquhart & Sullivan, a law firm which has represented Motorola against Apple in the past and who is known to be close to Google.

Background Facts and the Patent-in-Suit

The Patent-in-Suit is generally directed to a system and method of encoding signals representative of moving images (i.e., "video compression").

Video compression techniques are used in many industries that involve either the transmission of video from one location to another and/or the manufacture and sale of devices to receive or store video signals. These industries include, for example: content providers; cable and satellite companies; teleconferencing providers; television, electronics and cellular telephone manufacturers; television broadcasters and digital media providers.

Video compression reduces the amount of digital data needed to represent video so that it can be sent more efficiently over communications media, such as the Internet and satellites, or stored more efficiently on storage media such as DVDs and Blu-Ray disks. Video consists of a series of pictures, or frames, with each frame capturing a scene at an instant of time. When viewed consecutively, the frames form video sequences. Video compression involves reducing the amount of digital data needed to represent information about the content of these pictures or frames while allowing a video to ultimately be reproduced from that information.

There are numerous benefits to video compression. For instance, it enables large amounts of video data to be stored on smaller memory devices and permits broadcasters to transmit greater numbers of programs using the same bandwidth over a particular transmission medium. For example, without video compression it would be impossible to store a feature-length film on a single DVD. Also, video retrieval via the Internet would not be feasible due to the huge volume of uncompressed data that would need to be transmitted. The challenge that comes with video compression, however, is assuring that the video image ultimately reproduced from the reduced amount of digital data is of sufficient quality.

A video signal is encoded (compressed) prior to being transmitted over a medium or before it is stored on a medium. When the video signal is read off the storage medium or is received at the other end, it is decoded (decompressed) to recreate either the original signal or, in the case of a lossy compression technique (by which certain unnecessary bits of data are eliminated), a close approximation of the original signal. When encoding a video, the video signal is processed using a variety of techniques that reduce the amount of data, such as transformation, quantization, motion-compensated prediction and variable length encoding.

Lucent, and its predecessor AT&T, Inc., through their research arm Bell Labs, have a long history of research and development in the area of video compression. The Patent-in-Suit claims an apparatus and method, developed at Bell Labs, for the encoding of video data which are used in software and devices supporting various international standards, including MPEG-4, Part 2, H.263 and MPEG-4, Part 10 (H.264) video coding. Lucent transferred, assigned, conveyed, delivered and vested to MPT all of Lucent's interests and rights in the Patent-in-Suit in all countries and jurisdictions, along with the right to sue for past infringement (including all current and future claims and causes of action).

Count One against Apple (Mobile Devices)

In count one of this case, MPT states that "Apple continues to make, have made, use, sell, and offer for sale in the United States, and import into the United States, mobile devices which are capable of encoding and decoding digital video.

These Apple products can encode and decode video in compliance with a variety of standards promulgated by the International Organization for Standardization (ISO) and the International Telecommunications Union (ITU), including H.264. The ability to encode video images in these formats is found in Apple's mobile devices, including the iPhone 4s, iPad 2 and the "new" iPad.

Apple's products, including but not limited to the iPhone 4S, iPad 2 and the "new iPad" by virtue of the manner in which they encode video, infringe one or more claims of the '678 patent."

In count two of this complaint, MPT states that "Apple continues to make, have made, use, sell, and offer for sale in the United States, and import into the United States, computer software which is capable of encoding and decoding digital video.

In count three of complaint, MPT states that "Apple continues to make, have made, use, sell, and offer for sale in the United States, and import into the United States, desktop and laptop computers that are capable of encoding and decoding digital video.

These Apple products can encode video in compliance with a variety of standards promulgated by the International Organization for Standardization (ISO) and the International Telecommunications Union (ITU), including MPEG-4, Part 2, and H.264. The ability to encode video images in these formats are included in Apple's desktop and laptop computers, including its MacBook, MacBook Pro, MacBook Air, iMac, Mac Mini, and Mac Pro lines of computers."

At the end of each count, MPT states that "Apple, therefore, by making, having made, offering for sale, selling and/or importing its video-capable mobile products, has been and still is directly infringing, contributorily infringing, and/or inducing others to infringe the '678 patent. Apple will continue to infringe unless enjoined by this court.

As a result of Apple's infringement of the '678 patent, MPT is entitled to a reasonable royalty on all video-capable mobile products sold by Apple that embody an apparatus or method claimed by that patent.

Apple's infringement of the '678 patent has caused and will continue to cause MPT and its existing licensees substantial and irreparable injury for which MPT is entitled to receive injunctive relief and damages adequate to compensate it for such infringement.

Beyond the request for a "reasonable royalty" and injunctive relief as presented in their argument, Multimedia Patent Trust's prayer of relief also requests the trebling of damages if Apple is found to be guilty for willful infringement.

The case was filed in the California Southern District Court in San Diego late on Wednesday. The presiding Judge in this case is noted as being Judge John A. Houston. A. Houston. Another patent infringement case was filed against Apple in respect to QuickTime earlier this month and covered in our report titled "Apple Sued over Playback Technology used in QuickTime and iPhone