Patent Trolls have the Smartphone Industry in a State of Emergency 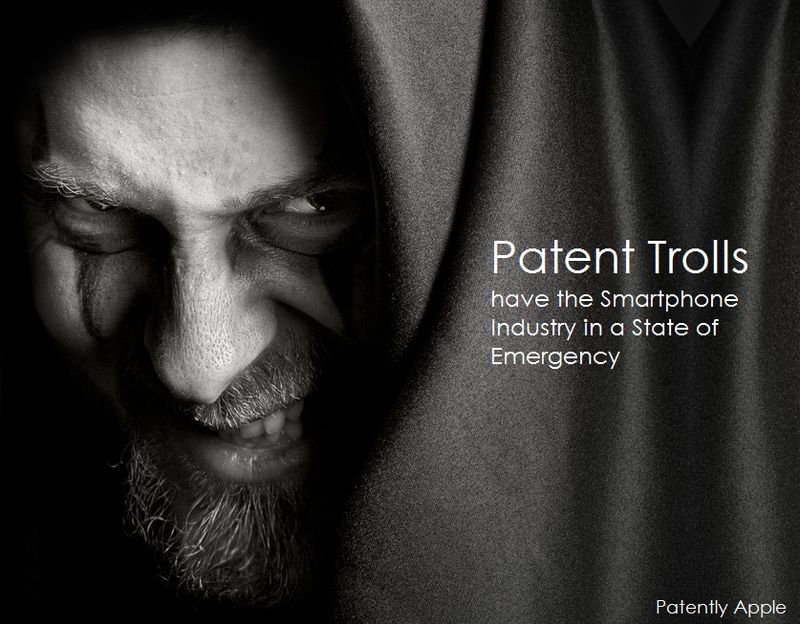 According to a study from the Boston University School of Law, patent litigation caused by "non-practicing entities" (NPEs), better known as "patent trolls," cost U.S. software and hardware companies US$29 billion in 2011. NPEs are individuals and firms that own patents but do not directly use their patented technology to produce goods or services and instead assert their patent rights against companies that do. Patent litigation costs to technology companies from NPE lawsuits have dramatically risen from $6.7 billion in 2005 to $12.6 billion in 2008 and more than $29.2 billion in 2011. The report goes on to state that "The rapid growth and high cost of NPE litigation documented here should set off an alarm warning to policy makers…" Well, it certainly has in Korea. A new report published today indicates that the domestic smartphone industry has indeed pressed the panic button to set off the alarm regarding the damage that patent trolls are exacting on their industry.

According to the Electronic Times Internet, the "domestic smartphone industry is in a state of emergency due to global 'patent trolls' launching a series of attacks. The report states that "Unlike rival manufacturers such as Apple and Nokia, there is no way to reach cross-license agreements with patent trolls through counter-suits." One of the key culprits that the article points to is InterDigital who has filed for 618 wireless related patents in the US this year alone, with close to 78% of them under examination by the US Patent and Trademark Office at this time.

How could the smartphone industry counter these patent trolls? The Boston University School of Law states that in order to change things, it is crucial to provide greater transparency in the patent system and courts should rigorously supervise patent damages awards to make sure that damages are proportional to the value of the patented technology. Besides that, the researchers called for policy reforms to constrain the generic problem of frivolous lawsuits.

Hmm, something tells me that we've been hearing about such remedies for some time now with little to nothing meaningful ever getting accomplished. Perhaps one of these fine days theoretical academic studies will turn into meaningful legal meat cleavers that will provide legitimate wireless companies with the legal means to control the runaway court damages that the Big Game Hunting patent trolls are now collecting.

To see some of the cases that Patent Trolls are launching against Apple, see our Patently Legal Archives.

However, our report focuses on the study put out by the Boston University School of Law. The study is focused on Pro NPEs who make it a busines to make money and not about the little inventor who could lose their home and life savings.

Your argument appears to be so professionally crafted so as to shift the argument away from the focus of the study. The report specifically mentions a company like InterDigital, which was the example used in the Korean report. Nowhere in the report is anyone pointing to poor inventors with a great idea.

While I appreciate your argument, it's simply misplaced in context to our report.

Independent inventors who spend great sums of money that sometimes represent the mortgaging of their homes to pay for the patent attorneys and U.S.P.T.O fees to have their inventions patented deserve the same protection that a multi- billion dollar company does.

To discriminate against one independent small inventor would be the same as discriminating against a large corporation holding a patent regardless of their ability to turn their invention into a product.

Should the independent inventor just turn is invention over to a large multi- million dollar company because he spent his life savings to patent his invention and lacks the funding to get the invention produced?

This website displays inventions that are patented by a large multi- national company. How many of the actual patents held by this company are currently a product?

Justice must be blind, if it is not their is no justice!

Multi- million dollar companies should do their due diligence prior to making a product or using a method that may be patented. Then they should offer the inventor something for his invention if they want to use it.

Our society is built on opportunity and the dreams of inventors is to innovate. To dismiss independent inventors without products as NPE's and then displaying an ugly image that may represent those who have toiled for sometimes years and decades to perfect their invention and have risked their life savings and family welfare for the belief in their inventions is simply callus.

The right to dream a dream and make it an invention is not reserved for those that are fortunate and of greater means. If we fail to allow any person to realize the American Dream of success through hard work, innovation and opportunity then we are no longer the greatest and most innovative nation the earth as ever seen, rather we are doomed to our own greed and circumstance.