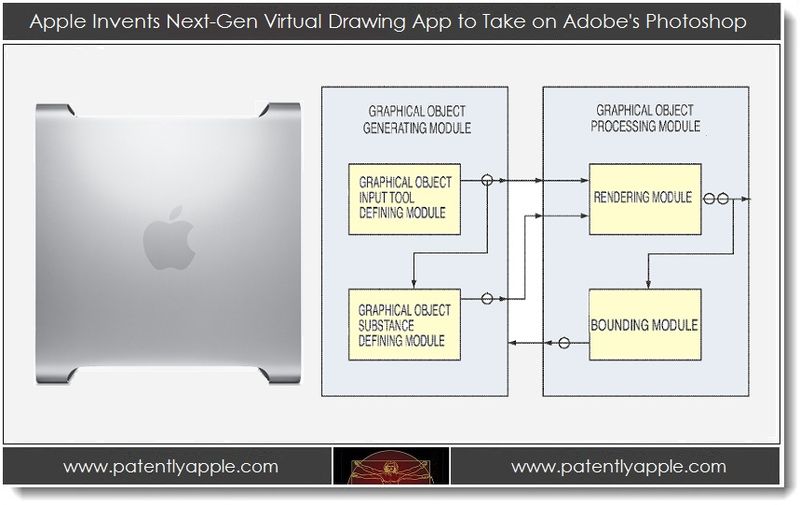 In June, Macworld reported that Apple CEO Tim Cook confirmed in an email to an Apple customer that the company is working on "something really great" to address the professional market. Earlier this week we posted a report on Apple's surprising patent win for a radical radial menus patent that illustrated the new system would apply to the iMac, Mac Pro and yes, the iPad. Today, the U.S. Patent Office published a jaw dropping Apple patent that reveals that they're working on a new advanced graphics app to take on Adobe's Photoshop and Illustrator. The new app will also be aimed at Macs and the iPad. The system is being designed to work with both the mouse and touchscreen gestures. Apple's two detailed patent applications cover the basics of the graphics app and their new simplified object layering system. It's clear that Tim Cook's email message about something really great is on the way for the professional market is starting to really take shape indeed.

Various user input gestures may be provided to directly interact with a displayed input tool for changing various properties of the input tool. For example, rather than having to select options on a displayed menu, a user may provide input gestures at or near a displayed input tool to directly manipulate one or more properties of that input tool, such as its size or color. By visually changing how an input tool is represented on a user workspace so as to indicate a change in an input tool property, a user may be provided with a more efficient and intuitive user interface for generating graphical objects.

The screens 300B, E and H noted below may present an interface for a virtual drawing space application found on a device with which a user may create and manipulate graphical objects for making original works of art (e.g., a virtual drawing space application that may be similar to that of Photoshop or Illustrator by Adobe Systems Incorporated or Microsoft Paint by Microsoft Corporation). It is to be understood, however, that the noted screens are merely exemplary, and that the display may present any images representing any type of graphical objects and/or graphical object animation that may be generated and processed by graphical display system.

The application may also provide on a portion of the screen at least one artist menu 310 that may include one or more graphical input options that a user may choose from to access various tools and functionalities of the application that may then be utilized by the user to create various types of graphical objects in the canvas area. The menu may provide one or more toolbars, toolboxes, palettes, or any other suitable user interface menus that may be one or more layers or windows distinct for the canvas.

Moreover, the artist menu may also include a background image input option 318, which a user may select for importing video-based or photographic images into the canvas area. It is to be understood, however, that options 312-318 of the artist menu are merely exemplary, and a virtual drawing space application may provide various other types of options that a user may work with for creating content in canvas area.

Works with a Mouse or Touchscreen

Apple states that a device may be configured to allow a user to provide input tool information to the system using any suitable gesture or gestures of any suitable input component or input components, such as a mouse or touch screen. A user may provide a pinch gesture on a touch screen, and the system may be configured to process such a gesture as input tool information to reduce the size property of the input tool.

To clarify, Apple states that a gesture may be characterized by, but is not limited to, a pinching, sliding, swiping, rotating, flexing, dragging, or tapping motion between or with any other finger or fingers. A single gesture may be performed with one or more hands, by one or more users, or any combination thereof. 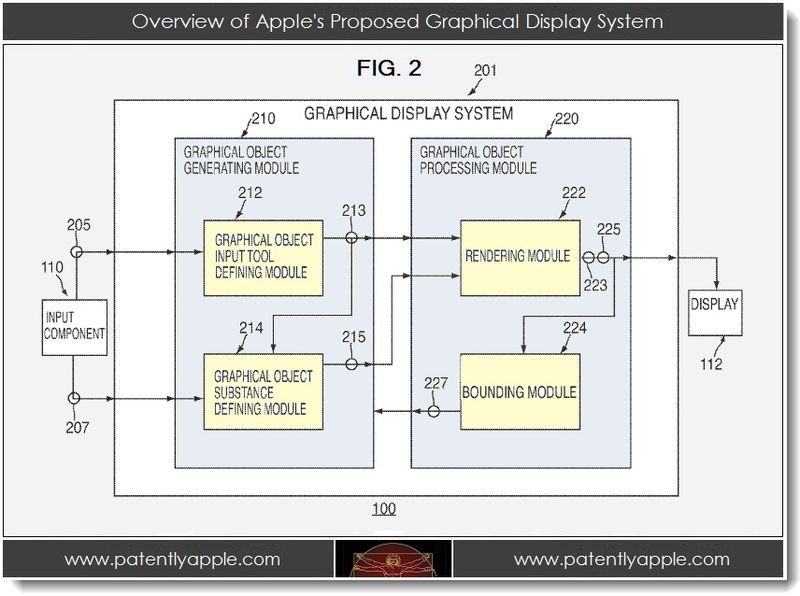 Apple's patent FIG. 2 shown below is from a second patent that directly relates to Apple's next generation graphics app. This particular illustration shows us another schematic view of a graphical display system in respect to object layer management. 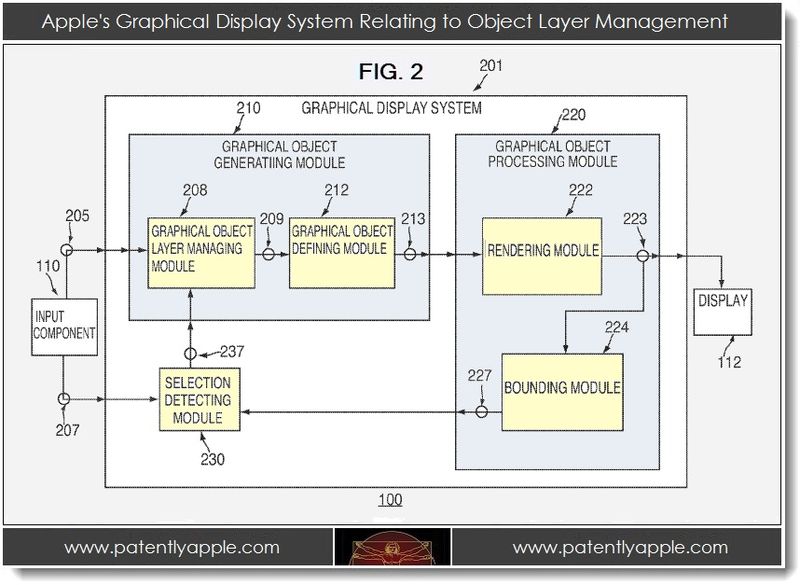 In Apple's second patent background they state that some electronic devices include a graphical display system for generating and presenting graphical objects, such as free-form drawing strokes, images, strings of text, and drawing shapes, on a display. A user of such devices may interact with the graphical display system via a user interface to create different graphical objects in different layers, which may overlap and be stacked in various orders when presented for display. However, the ways in which currently available electronic devices allow a user to manage various layers of graphical object data may be confusing or overwhelming.

Apple's solution to this problem is found in a secondary patent application published today that relates to the same next generation graphics app as earlier covered. This secondary invention focuses in on systems, methods, and computer-readable media for managing layers of graphical object data.

Apple states that rather than explicitly creating and managing multiple graphical object layers (e.g., via a layers list that may be presented to and manipulated by a user), a graphical display system of an electronic device may be configured to utilize an implicit layer scheme that may be less confusing and less overwhelming to a casual user.

Such an implicit layer management scheme may provide an interface that may not confuse a user with a layers list or that may not put a user in a situation where he or she may try to create a first type of graphical object content when a layer that is incompatible with the first type of graphical object content has been activated. Therefore, a graphical display system may be configured to follow one or more rules or principles when defining, selecting, and/or managing various graphical object layers, such that the simplicity of a basic drawing space application may be combined with the flexibility and non-destructive manipulation capabilities of a more advanced layering application. Apple's patent applications were originally filed in Q1 2011 by inventors Conrad Carlen and Matthew Sarnoff and published today by the US Patent and Trademark Office. Once again it has to be said that patent graphics are only presented for the sake of conveying a concept and don't represent what Apple will actually unveil. This isn't a design patent. Anyways, you know that Scott Forstall and Apple's team of great user interface designers will actually deliver something very, very cool. It's the concept that's jaw dropping in scope and more so because so many thought that Apple was phasing out the Mac Pro.

Perhaps these new graphic apps will require one of Apple's advanced mice (one, two). Only time will tell. At the end of the day, this news may be a bombshell to some: Boom!

On Tuesday we posted a report titled "Apple Wins Major Apple TV Patent Relating to Cable TV." We updated our report last night to include a news leak by the Wall Street Journal that Apple is in talks with some of the biggest U.S. Cable operators about letting consumers use an Apple device as a set-top-box for live televisions and other content. In light of Apple's granted patent, this was interesting news to say the least.

The sites that we link to above offer you an avenue to make your comments about this report in other languages. These great community sites also provide our guests with varying takes on Apple's latest invention. Whether they're pro or con, you may find them to be interesting, fun or feisty. If you have the time, join the conversation!