Apple Sued over Playback Technology used in QuickTime and iPhone 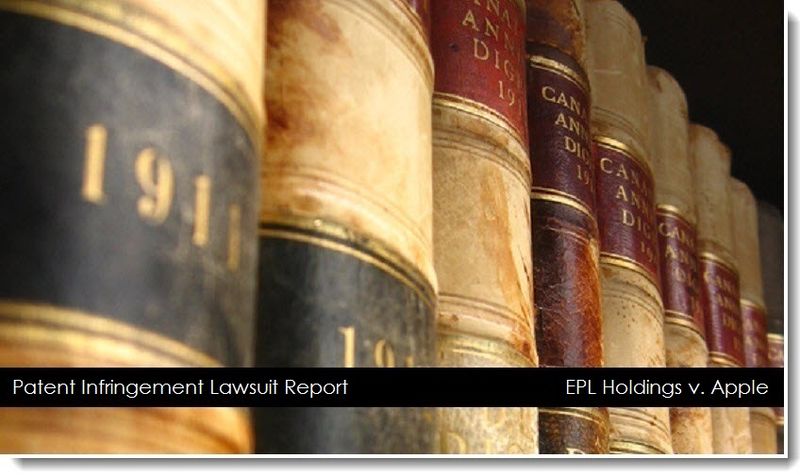 EPL Holdings, a Delaware company run out of Palo Alto has filed a patent infringement lawsuit against Apple. The official filing with the court states that Enounce had entered into a non-disclosure agreement with Apple back in early 2002. The actual offer for their technology came in the following month at a low ball price that Enounce refused. EPL claims that Apple went ahead anyways and used the technology used in QuickTime and the iPhone.

Factual Background Presented in the Complaint

Since before 1992, EPL and its predecessor in interest Enounce, Inc., have developed and continue to develop important technologies that allow consumers to play back digital media content, including audio and video, at variable speeds. Variable speed control is becoming as popular as volume control on digital media playback devices. Indeed, this technology has become increasingly prevalent in some of the most popular consumer electronic products currently on the market.

On or about January 28, 2002, Apple employee Tony Fadell requested a meeting with Enounce's founder, Donald J. Hejna, Jr., to discuss the playback technology. In response to Apple's request, on about February 5, 2002, Mr. Hejna and another employee, Howard Giles, met with Mr. Fadell and at least two other Apple employees at Apple's Cupertino, California offices and discussed Enounce's patented technology.

Apple and Enounce then entered into a non-disclosure agreement effective February 6, 2002, that expired on February 6, 2005. On or about March 19, 2002, Apple employee Aram Lindahl met with Mr. Hejna and again discussed Enounce's patented technology. At that Meeting, Mr. Hejna provided Mr. Lindahl with a copy of U.S. patent number 5,175,769 (the '769 patent). Within weeks of the March 19, 2002 meeting, Apple offered Enounce a de minimis $50,000 for a license to use Enounce's patented technology. Because Mr. Hejna and his colleagues believed that the offer fell woefully short of the value of their technology, Enounce declined Apple's offer.

Thereafter, and unbeknownst to Enounce, Apple began to extensively using Enounce's patented technologies by incorporating them into key consumer electronics products, including but not limited to the iPhone and iPad, on which Apple makes billions of dollars in U.S. sales annually. Apple took these actions with blatant knowledge and disregard for the legal rights of Enounce. Moreover, Apple began to advertise and tout the ability of its digital media players to play back media files at variable speeds, the precise technology found in Enounce patents. For example, Apple describes its QuickTime product as a "sophisticated media player" and further states, "want to speed through a movie or slow things down? A handy slider lets you set playback from 1/2x to 3x the normal speed." (http://www.apple.com/quicktime/what-is/).

While Apple enjoyed billions of dollars in sales, Mr. Hejna and his company have suffered and continue to suffer due to the inability to realize the full and fair value of the patented invention. 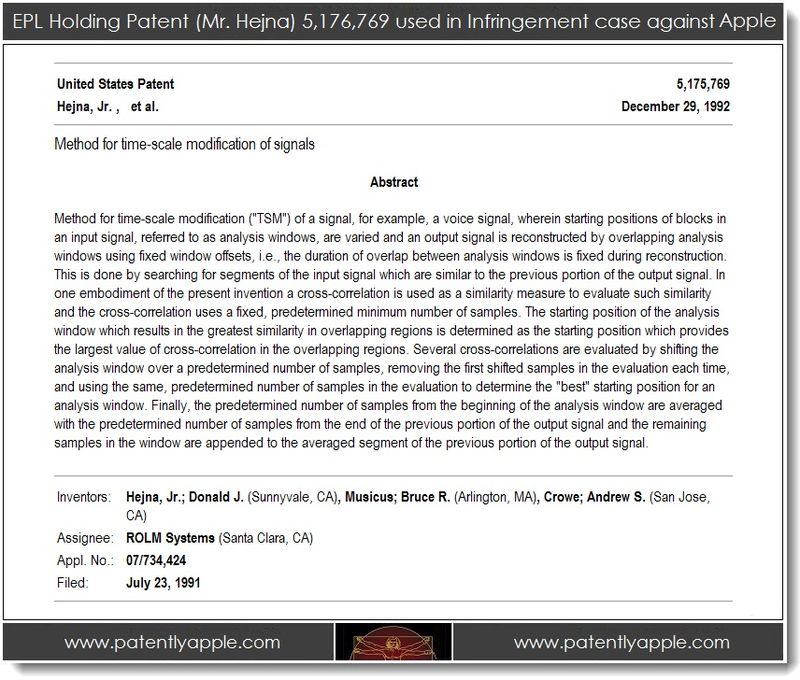 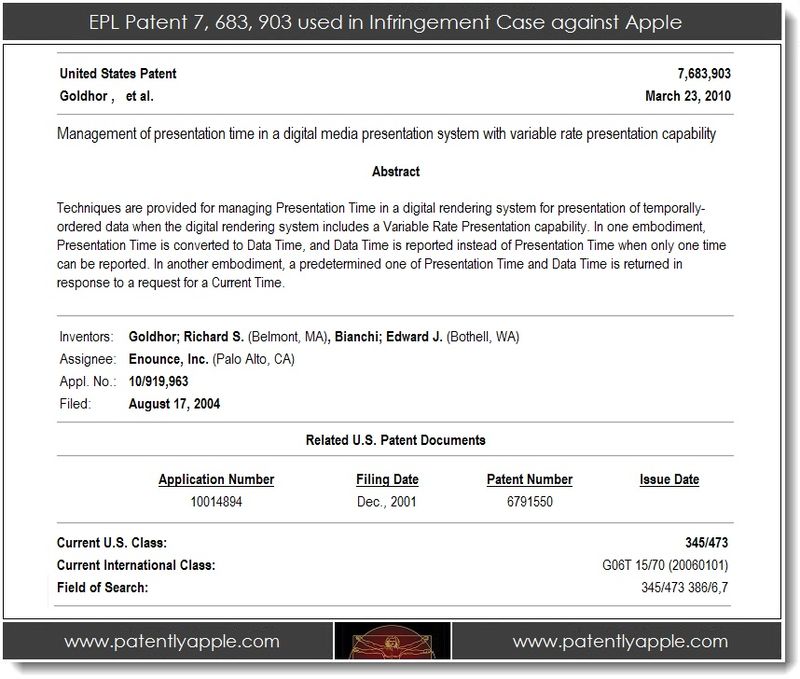 Interestingly, EPL isn't claiming willful infringement which in this case would only be natural if the facts are faithful. Furthermore, considering that Enounce refused Apples initial 50,000 offer, it's a little strange that after all of these years they're bringing this to court to only ask for $75,000 or $25,000 more than was originally offered. See the specifics listed on the docket below:

The case was filed in the United States District Court for Northern California in San Jose. The presiding Judge in this case is noted as being Magistrate Judge Howard R. Lloyd. EPL is requesting a trial by Jury.

I mean we keep seeing these patent trolls coming out of the woodwork years later with patents for basically the same generic “I think images should exist, be able to be moved, saved and seen in some order” type patents.

Patents should be specific, not general, especially not overly general. That leads to several patents basically saying the same thing. PS, if three companies all sue Apple over basic quicktime operation, should they not have to fight each other to see which patent is right, then the winner can deal with Apple?

So let me get this straight; they go on and on about how Apple has used their patented tech to sell Billions of dollars worth of products annually, since 2002, only to ask for $75,000?? Sounds more than a little fishy to me.

If they thought Apple actually infringed, they would have asked for millions.

My guess is, Apple was willing to throw them a bone... but when they turned down free money, Apple went ahead and created a similar feature implemented in an entirely different way (which is feasible, since they have a patent document describing the original implementation).