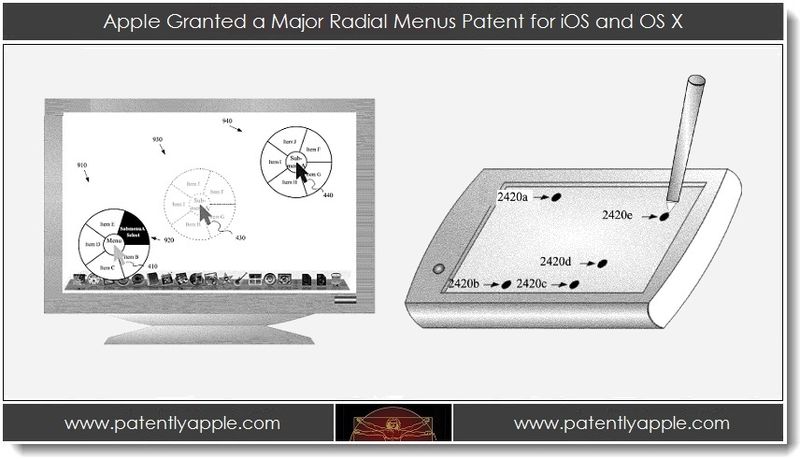 The US Patent and Trademark Office officially published a series of twenty-nine newly granted patents for Apple Inc. today. In this particular report we focus entirely on Apple's first granted patent for Radial Menus. The first two patent filings were discovered by Patently Apple, not in the US, but rather in filings found in Europe and Korea. Even the granted patent published today in the US was a surprise, as it too came out of nowhere. In this granted patent, Apple notes that radial menus will be both for the desktop and portable devices. Radial menus will work with a mouse and/or touch commands on multi-touch displays using a finger, stylus and/or iPen. The timing of this granted patent comes on the heels of Google's radial patent filing coming to light in this current quarter. Obviously there's a race to get radial menus on portables and beyond – and Apple's in-depth trio of patents now give them a definite edge.

Apple has been granted a patent relating to radial menus in computer applications. Specifically, this invention is directed toward providing menus and submenus at optimal locations relative to a cursor. Apple's patent specifically points to the iPhone but it also focuses in on the desktop.

The most common method of presenting such options in a graphical user interface is to provide a linear pull-down menu. That is, a menu including a row of menu items that give access to columns of submenus. In a linear pull-down menu a user selects a general category from a provided list of menu items, such as File, Edit, View, Window, Help, etc. These broad categories are sometimes called "top level menu items" because in a hierarchal tree of menus, they would be the items at top of the tree. Some top level menu items allow access to submenus related to the selected item. For example, selecting a top level menu item "File" can activate the item, causing a submenu to appear with selectable commands relating to files. The submenu would appear as a column of the options, leading down from the "File" menu item. A submenu for "File" might include "Save", "Load", or "Print" commands. Some items on submenus might have submenus of their own, and so on for any number of levels of submenus.

Linear pull-down menus are often located at or near the top of a screen or window in which an application is running. Accessing such a linear pull-down menu via a cursor control device involves moving a cursor to the top of the window with the cursor control device, then moving along to the appropriate top level menu item, activating a submenu (if necessary), etc. Using a cursor to select items on a linear pull-down menu requires a user to move the cursor by a particular distance down the menu to reach the desired menu item. This can require moving a cursor through a considerable distance and with considerable precision required to reach the desired menu item without going past it.

An alternate method of presenting a menu of options uses a radial menu. A radial menu can appear as a set of wedges, each wedge representing a menu item, around the location of a cursor on the display. Submenus of some radial menus are activated by moving a cursor to the wedge representing that submenu and clicking on that wedge. Such a method is sometimes called "hunt and click". The hunt and click method provided a fully functional menu, and there was no obvious reason to modify it. However, useful and non-obvious changes to the methods of providing radial menus were possible, such as using other processes for selecting menus, or providing a user with options for more than one method. Accordingly, the present invention provides such useful, non-obvious changes. Apple's patent FIGS.10a and 10b illustrate two different paths that would both activate the same series of submenus; FIGS. 15a through to 15f illustrate a submenu starting off small and expanding against first one, then two edges. 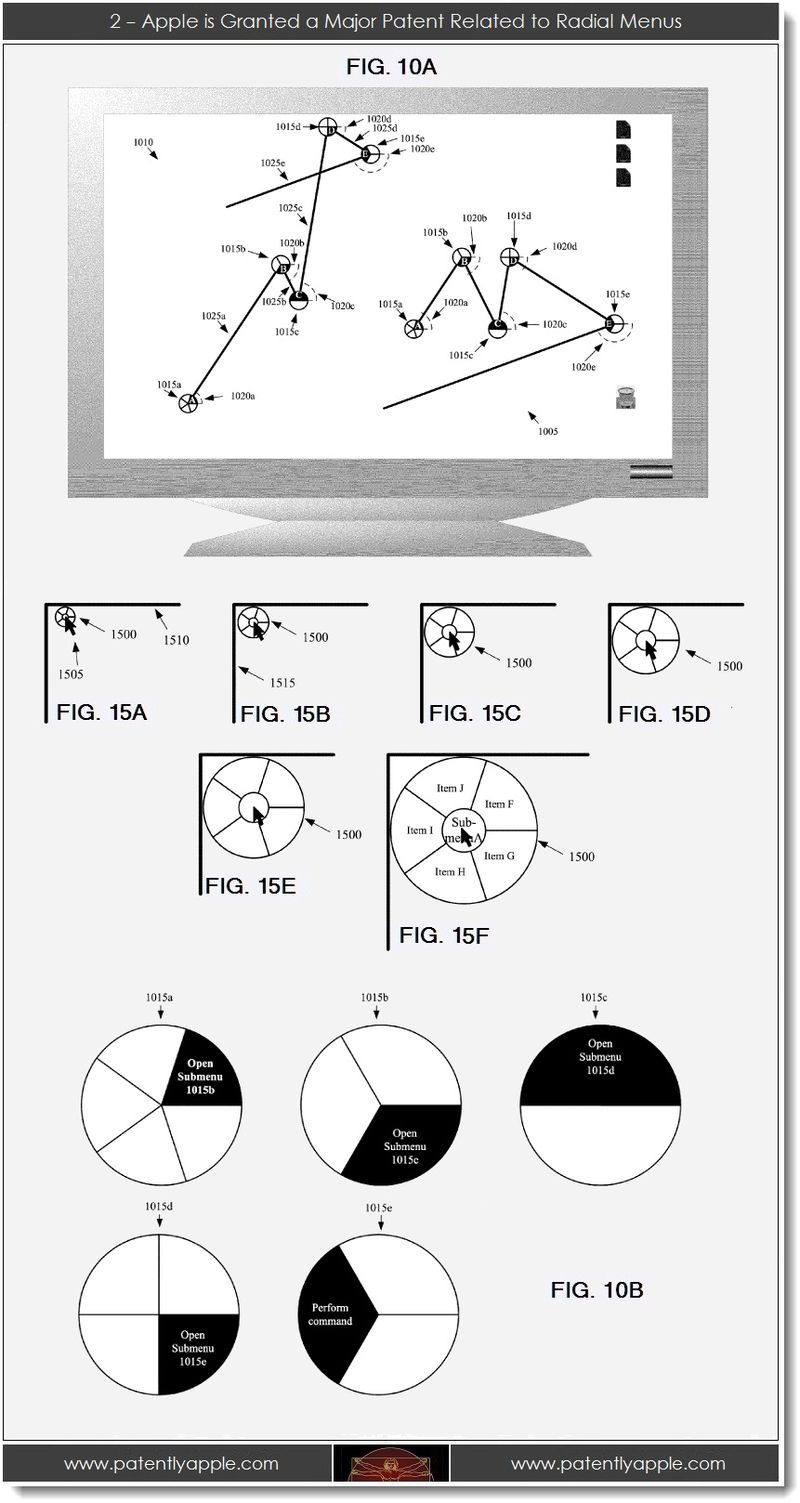 Apple's patent FIG. 18 illustrates a timing diagram for an alternate spring-load command; FIG. 23 illustrates a mouse, computer, and a display screen with the graphical user interface of some embodiments. 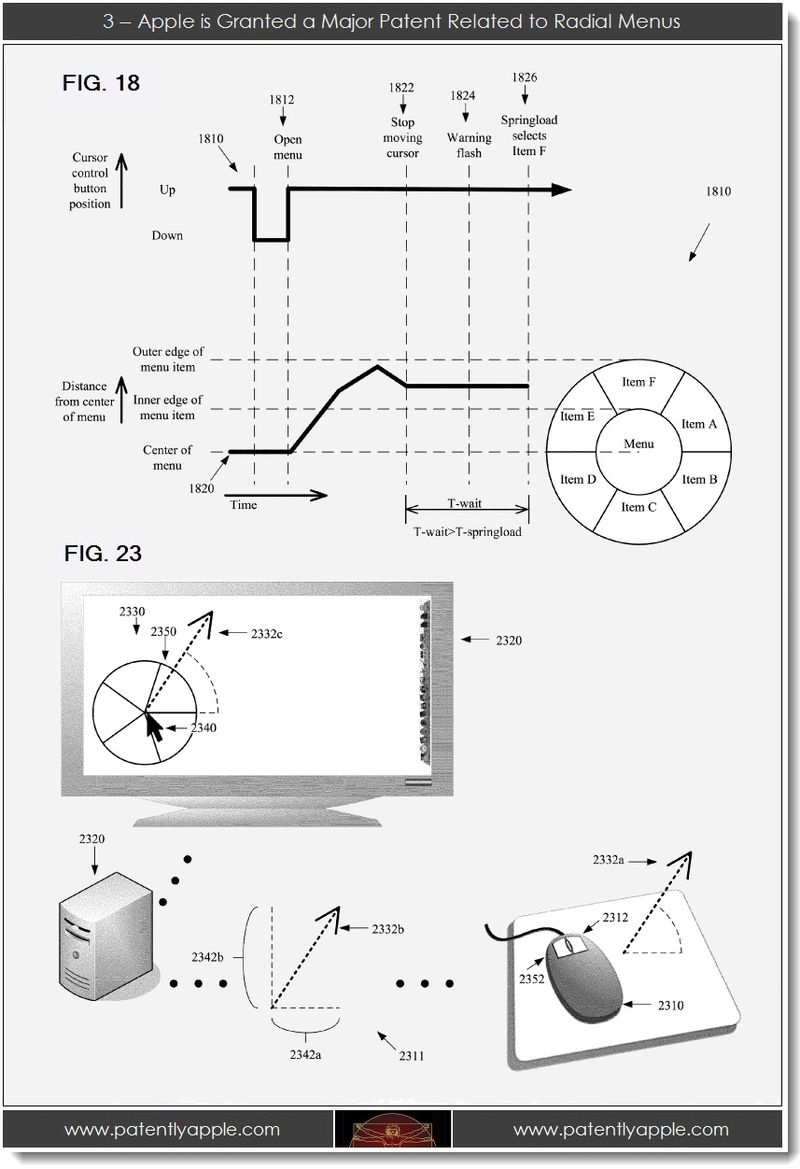 Apple's patent FIG. 24 illustrates a one-to-one correspondence between a graphics tablet and a display screen; FIG. 25 presents one embodiment of a touch-sensitive input device that may be utilized to implement the present invention. 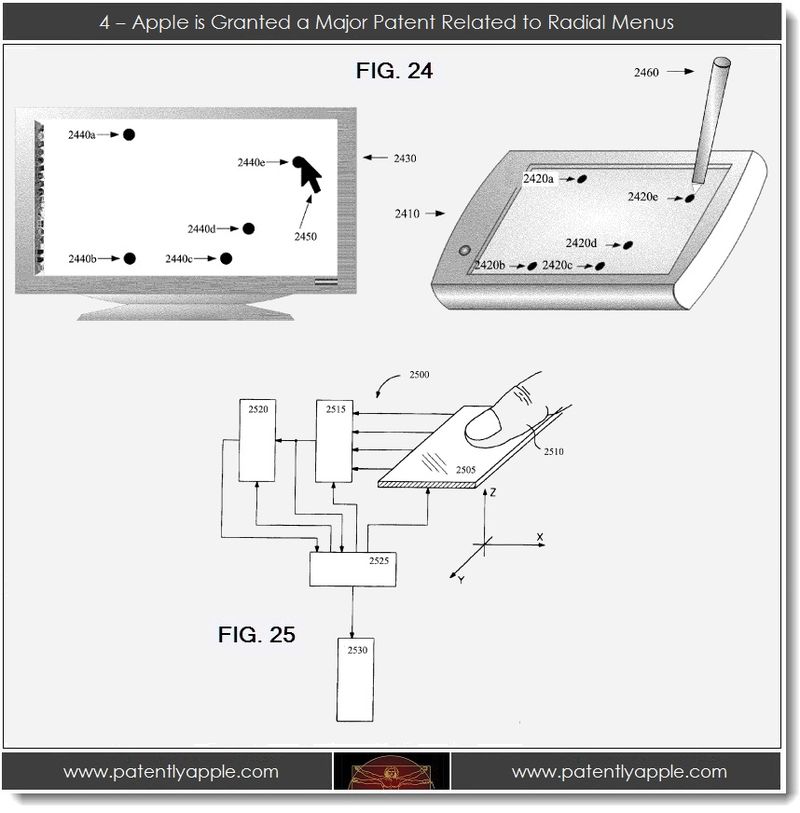 Apple credits Charles Migos and Jean-Pierre Mouilleseaux as the inventors of this granted patent titled "Radial Menu Selection" which was originally filed in Q2 2008 and published today by the US Patent and Trademark Office.

" But in the end, it's just noise and nothing more. Apple gained the patent, so get over it."

Actually, Any person at any time may file a request for reexamination by the Office of any claim of a patent on the basis of any prior art cited under the provisions of section
301 of this title.

There has been a number of common anti-Apple comments sent in to us about Prior Art. This isn't the venue for venting about prior art. You could always contact the US Patent Office where it's appropriate considering that they granted Apple this patent.

This segment of our site presents legitimately grained granted patents. Apple plays by the rules and gains patents just like Google, Sony, Samsung and and others who file and receive granted patents week in and week out. Shouting about Prior Art is a waste of air and Patently Apple won't generally publish such comments.

Once again, we thank you for taking the time to send in your comments to us, but shouting about prior art isn't appropriate. If Apple loses a patent case in the future based on prior art, then we'll gladly publish that verdict. That's when it's appropriate to post such a story or comment about prior art.

Patently Apple publishes a segment called Patently legal where we publish reports highlighting those who are suing Apple. There's a time and place for such arguments and this isn't the place for posting everyone's vision of what prior art is or isn't.

How many times did people say that about the iPad in contrast to the old tablet PC. It's easy to throw around the phrase "prior art" but it's not always in conflict as you think. The patent office has rules, it has examiners and generally patents are reviewed carefully. If Apple has gained a granted patent for their radial menu idea, then it's because there's just reasoning. So all this whining about prior art is just noise. If you don't like Apple, as so many do now, throwing around prior art is just an excuse to crap on Apple. But in the end, it's just noise and nothing more. Apple gained the patent, so get over it.

Wouldn't Apple's original click wheel also cover this. In effect it is a "menu".