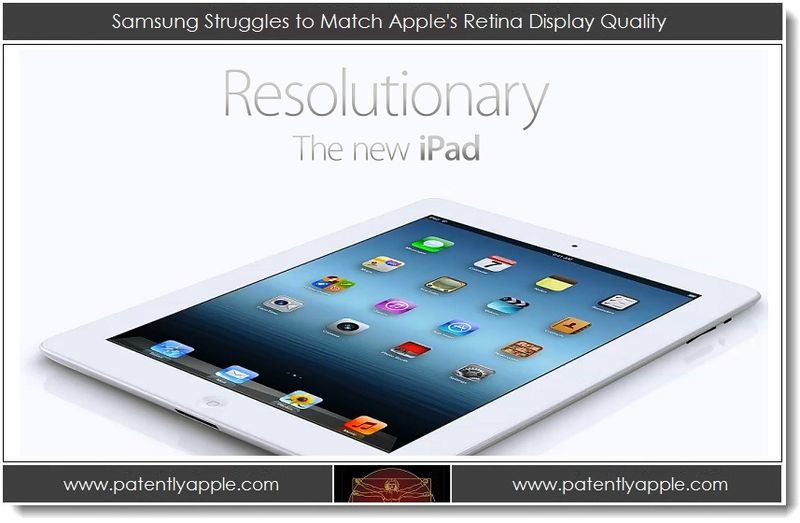 If you own Apple's latest iPad that incorporates their brilliant Retina Display technology, you know just how stunning it is to behold. The technology behind the Retina Display is obviously harder to copy than most thought. A recent report out Korea states that Samsung is struggling to come up with a matching resolution solution.

According to Korea IT News, "Samsung Display succeeded in boosting the screen resolution of AMOLED by means of fine metal mask (FMM) technology. In doing so, the display panel manufacturer veered from laser-induced thermal imaging (LITI), an alternative technology it had focused its R&D efforts on. Experts are paying attention to whether the new technique will be able to fully resolve AMOLED's resolution problem, its weakest point compared with the Retina Display of the iPhone."

The Flipside of Brilliant Displays

Yet the flipside to a brilliant display such as Apple's Retina is that it may be too brilliant if the setting is set too high. A new study from the U.S. Department of Health & Human Services states that screen time should be limited to less than 2 hours per day. But it goes on to point to display backlighting being one of the largest culprits.

A report published by "A Healthier Michigan," states that "Most computer, tv, or phone screens are backlit. That is, the screens have built in light to illuminate the screen making it visible during dark or extremely bright conditions. This artificial lighting can cause our eyes to dilate or constrict according to the screen brightness and maintain this focus for long periods of time. Constantly staring at a screen can cause sensitivity to light, or photophobia, or can lead to problems such as blurred vision, headaches, or focus problems.

These factors together cause a downward spiral. Our vision becomes poorer, resulting in closer distances, more focusing, and brighter lighting to see the screens we depend on. The net result is medically called "Computer Vision Syndrome" and affects an estimated 150-200 million US workers. In the past 25 years, the growing presence of the personal computer, laptops, and televisions in everyday life has contributed to a 66% increase in nearsightedness amongst the population."

As someone who works on computers some 14 hours a day, I've experienced these symptoms. The report goes on to state that in order to prevent your eyes from suffering from too much screen time, take frequent breaks away from the screen, sit as far away from the screen as possible, and use glare protectors to reduce the amount of light focused into the eye." Of course a glare protector would be a direct conflict to Apple's Resolutionary Display so an alternative would be to crank down the iPad's brightness in your settings - for the sake of your eyes in the long run.

@ ahem. Yes I read your link and here's what I read:

"First off, Samsung's AMOLED technology can't currently deliver the amazing 2048×1536 screen resolution of the new iPad, which packs more than 3 million pixels inside a 9.7-inch display. What's more, some tests have shown that the organic materials used in OLED displays have a shorter brightness lifespan than those used in LCDs (depending on the type of device)."

When I compared an iPhone with a Galaxy Note or others, it was a joke. Samsung's displays were so dead looking compared to Apple's. So thanks for the confimation that Samsung's AMOLED can't match Apple's Retina Display.

Samsung makes the Retina Display for Apple, head here for why they don't use it themselves - http://www.wired.co.uk/news/archive/2012-04/04/why-samsung-makes-retina-displays

Wow, to think that back in the 1980s, American doctors said that watching too much TV wasn't damaging to the eyes, and meanwhile, many Asian parents were saying too much TV was bad for their kids eyes. Two decades later, this is accepted knowledge in the scentific world. Shame.

The report from Korea states:

"Experts are paying attention to whether the new technique will be able to fully resolve AMOLED's resolution problem, its weakest point compared with the Retina Display of the iPhone."

To repeat, "resolve AMOLED's resolution problem, it's weakest point compared with the Retina display of the iPhone."

What part of this don't you get. In comparison to the Retina Display, AMOLED has problems matching it. That's to the point. Stop your whining.

APPLE would like to switch from Retina to AMOLED screens primarily to save battery time; SAMSUNG does not want to let APPLE 'catch up' by selling them the AMOLED displays. Thus APPLE is behind the curve!

Hey Pb, they do "for Apple" but it's not their technology. Trying to get around apple's technology isn't easy and they're in enough legal trouble with Apple as it is.

I think a billion people will laugh along with you - Ha!

Samsung produces apples retina display...As well as the vast majority of all their hardware.

Screen time should be limited to two hours a day?