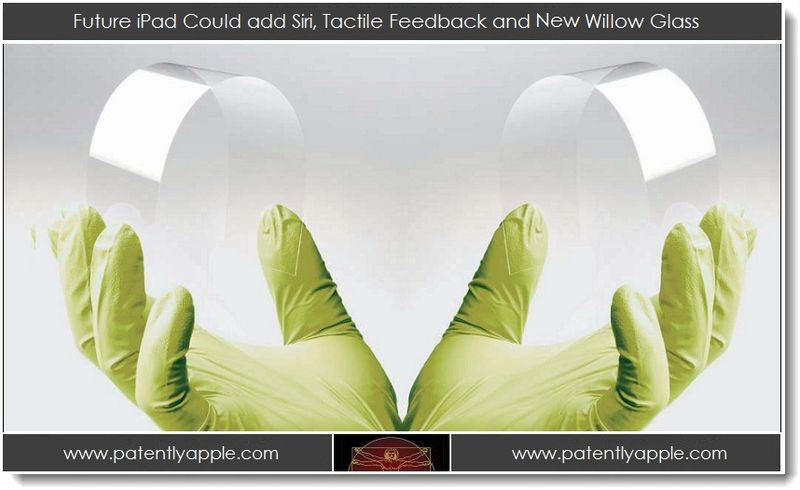 Specialty glass Company Corning, famous for its "gorilla glass" used in Apple devices, has an ultra-slim flexible glass called "willow glass" that has the potential to enable displays to be wrapped around a device. Corning said it's currently shipping samples of willow glass, which is compatible with OLED displays, to companies. Companies like Samsung and Microsoft already have patents on this type of concept and Nokia has a concept video that's very interesting. The race to overtake Apple's iPad is hot, as competitors team up with cutting edge University research labs to find that next great thing that could topple the iPad. Yet Tony Fadell, Apple's former Senior Vice President of the iPod Division, thinks that Apple has more technology coming to the iPad that will keep the iPad on top.

A Little about Corning's Willow Glass

According to Corning, Willow Glass will help enable thin, light and cost-efficient applications including today's slim displays and the smart surfaces of the future. The thinness, strength, and flexibility of the glass have the potential to enable displays to be "wrapped" around a device or structure. As well, Corning Willow Glass can be processed at temperatures up to 500° C. High temperature processing capability is essential for today's high-end displays, and is a processing condition that cannot be supported with polymer films. Corning Willow Glass will enable the industry to pursue high-temperature, continuous "roll-to-roll" processes – similar to how newsprint is produced – that have been impossible until now.

Corning Willow Glass is formulated to perform exceptionally well for electronic components such as touch sensors, as well as leveraging glass's natural hermetic properties as a seal for OLED displays and other moisture and oxygen-sensitive technologies. Whether Apple will take advantage of Corning's next generation Willow Glass is not known at this time, but the potential could be staggering.

Think of Future iPad's with Tactile Feedback and Siri

Each new generation of tablets like Apple's Retina Display boasts big improvements in pixel density and image quality, making photos, games and movies more life-like. Manufacturers and software designers have made less progress finding ways to let computers give physical, tactile feedback — but they're working on it.

Tony Fadell told Reuters that "The big open area that is left to tackle is truly great input. There is tactile input as well as voice input. Those are the two inputs that still need to be addressed in tablets." Of course Fadell can't and wouldn't spill the beans on how Apple will eventually integrate Siri and next generation tactile feedback into future iPads, but the mere mention of these technologies by Fadell is a tell-tale sign that this is likely what Apple has on the horizon.

In a recent patent application related to tactile, or haptic, technology, Apple outlined how features could be added to a screen that would make it possible to alter the feel of its surface.

You could learn more about this topic by reading Reuter's report titled "Brave new World of Tomorrow's Tablets." We close out our report with Corning's look at the future of glass applications covering tablets and so much more.