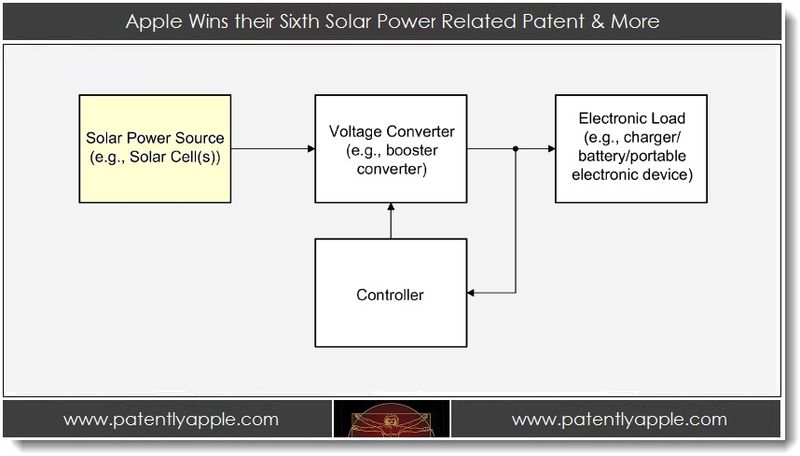 The US Patent and Trademark Office officially published a series of 23 newly granted patents for Apple Inc. today. In our third and final granted patent report of the day we focus in on Apple's sixth granted patent for solar power related technology. Our report also covers a secondary granted patent for an anti-theft system for iDevices based on using an accelerometer. Whether this one even passes the laugh test is up to you to determine. 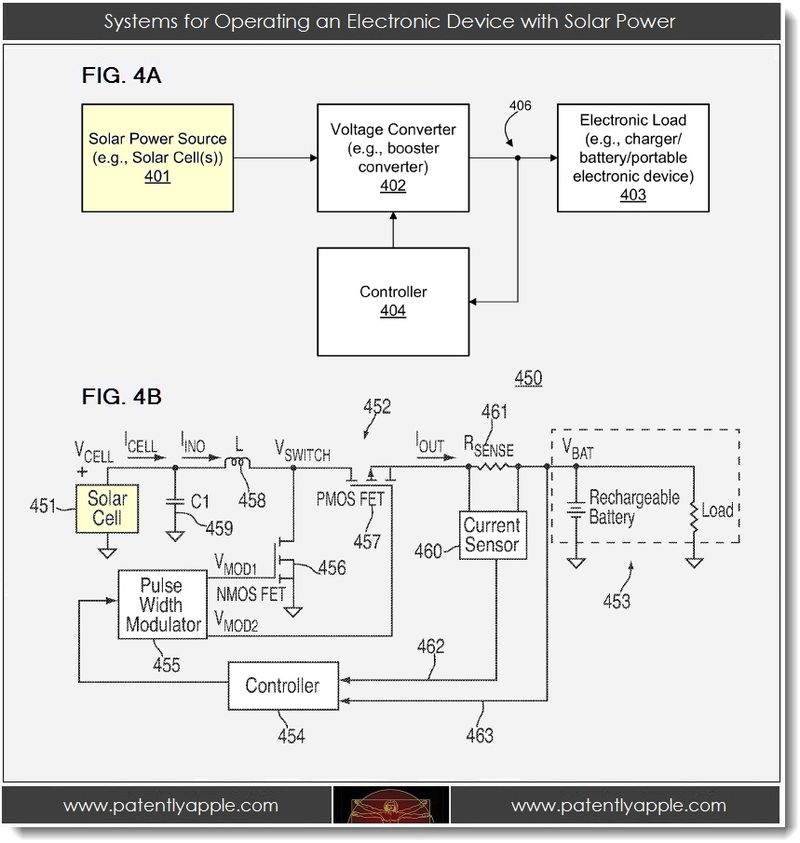 Apple's patent FIG. 4B is a simplified schematic diagram illustrating an apparatus for charging a battery from a solar cell, according to one embodiment of the invention. For example, exemplary circuit 450 may be implemented as an embodiment of circuit 400 of FIG. 4A. 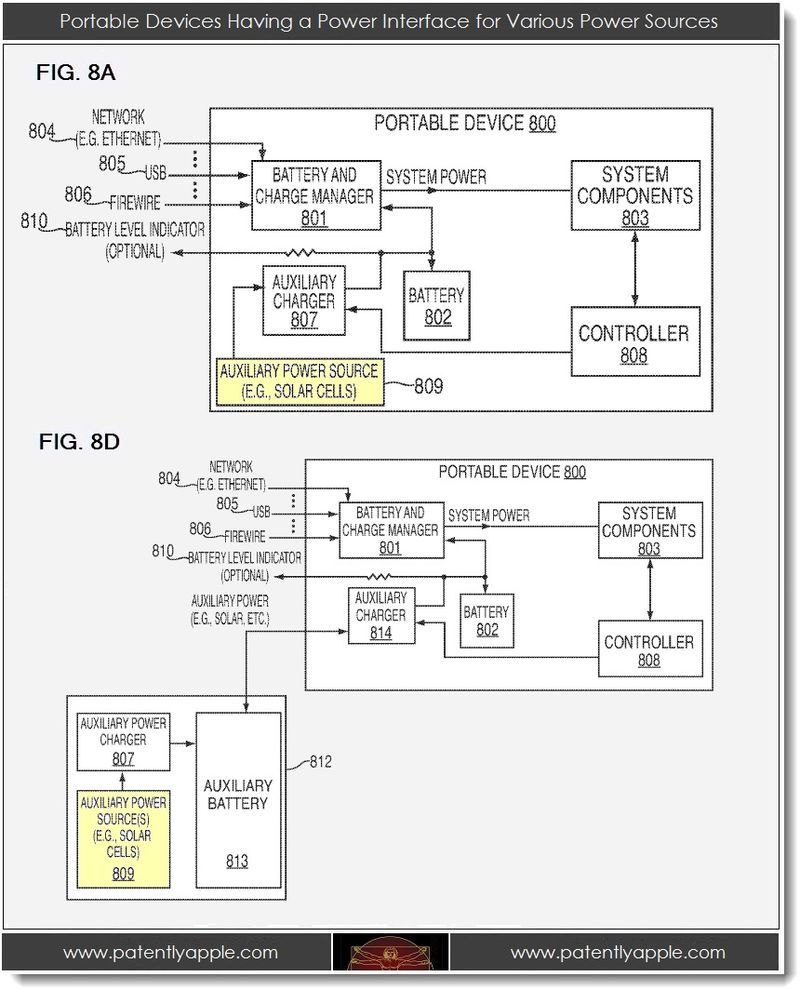 Apple credits Wendell Sander and Daniel Warren as the inventors of this patent which was originally filed in Q4 2010 and published today by the US Patent and Trademark Office.

The drive toward miniaturization of electronics has resulted in computer-based systems that are becoming much more portable. Current portable electronic devices such as laptop computers, hand-held devices such as cellular telephones and personal media devices, such as the iPod are sufficiently compact and lightweight as to make them easily movable. Unfortunately, such ease of transport also implies ease of theft

One current anti-theft system is a simple mechanical lock that attaches to the housing of a device, with a cable that wraps around other objects so as to affix the portable device to these objects. In this manner, portable electronic devices can be effectively tethered to nearby fixtures, making theft difficult. However, such systems suffer from drawbacks. For instance, users are forced to carry around a bulky cable and lock.

Apple's proposed solution doesn't require the use of additional bulky physical mechanisms, and which is capable of functioning in many different locations.

Broadly speaking, Apple's invention uses acceleration of a monitored device and processes that data to determine whether a likely theft condition exists. If so, the various embodiments of the invention then seek to prevent theft by initiating an alarm.

Apple's invention can be implemented in numerous ways, including as a method, system, device, apparatus, or computer readable medium. Several embodiments of the invention are discussed below. 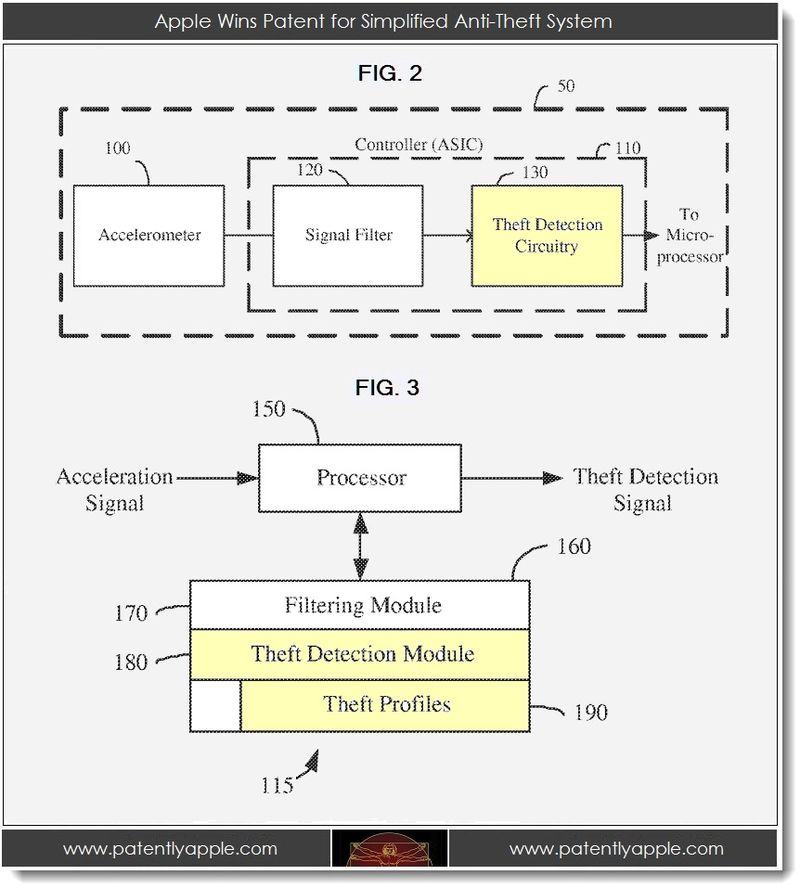 Apple provides us with an example scenario: "For instance, if it is determined that the manual transport of a particular portable electronic device often results in the portable electronic device undergoing accelerations in the range of 1-25 Hz (say, due to the rhythmic movement caused by a thief's walking or running), along with accelerations in the range of 100-200 Hz (perhaps due to quicker changes in direction, jumping, etc.), the signal filter 120 can be designed to pass frequencies only in those ranges. The theft detection circuitry 130 can then send a theft detection signal to the microprocessor 20 only upon detecting frequencies in both ranges."

Apple credits Paul Wehrenberg as the sole inventor of granted patent 8,217,792which was originally filed in Q2 2011.

I don't know about you, but this patent/invention is a little hard to swallow and doesn't really pass the laugh test. It's better than nothing, mind you, but it just doesn't seem to be a failsafe system worth caring about. If you think differently, then let me know in the comments below. .