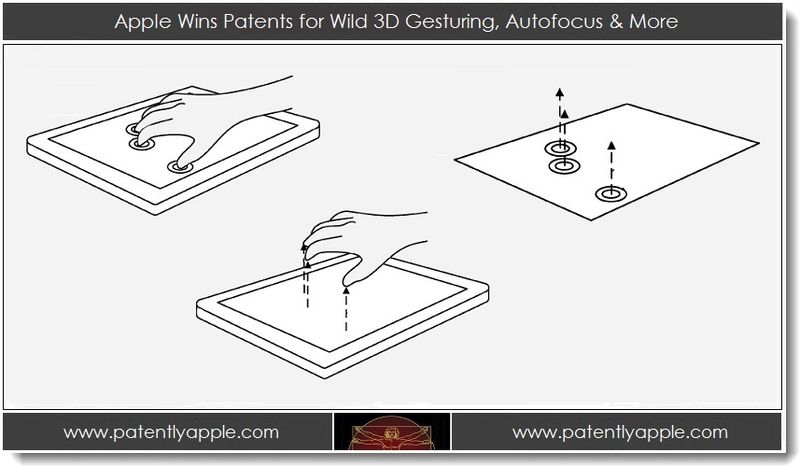 The US Patent and Trademark Office officially published a series of twenty-two newly granted patents for Apple Inc. today. Two of the noteworthy granted patents issued today include one that details Apple's advanced autofocus features for iOS cameras while a second patent covers wild new 3D gestures coming to a future iPad.

Apple has received a Granted Patent that relates to working with 3D objects.

Overview: Who will benefit from 3D Gesturing? 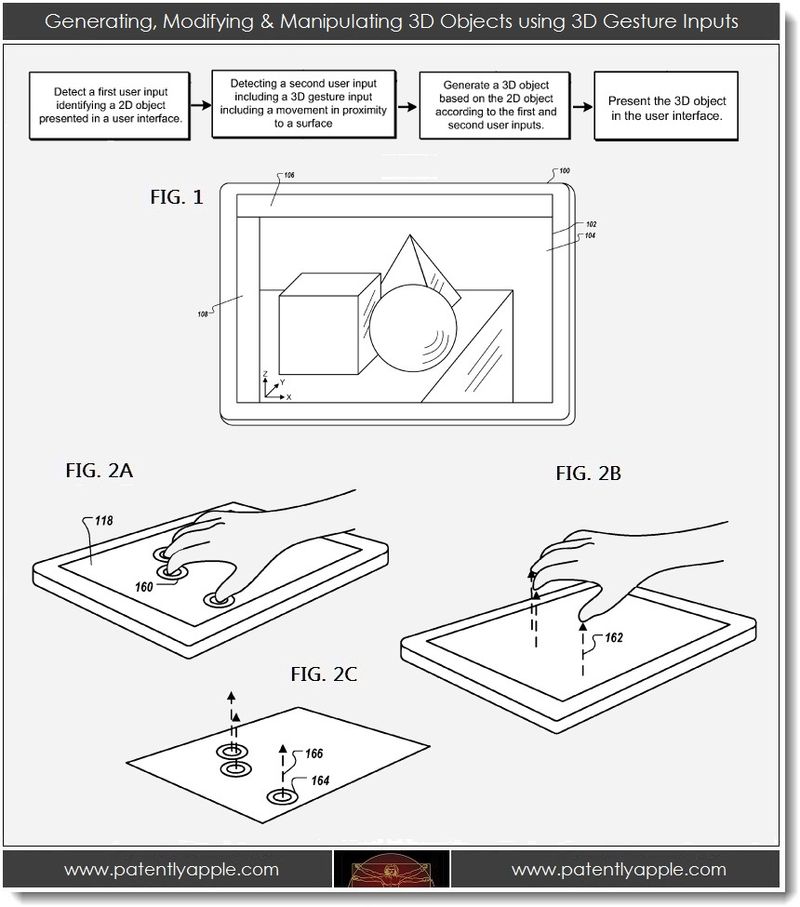 Additionally, Apple introduced us to various 3D gesturing inputs. Apple's patent FIG.1 noted above illustrates an iPad (device 100) which includes a touch-sensitive display that is responsive to touch inputs, 2D and 3D gesture inputs. An application program, such as a CAD program, could be executed on the iPad to enable a user to generate and manipulate 2D and 3D objects. 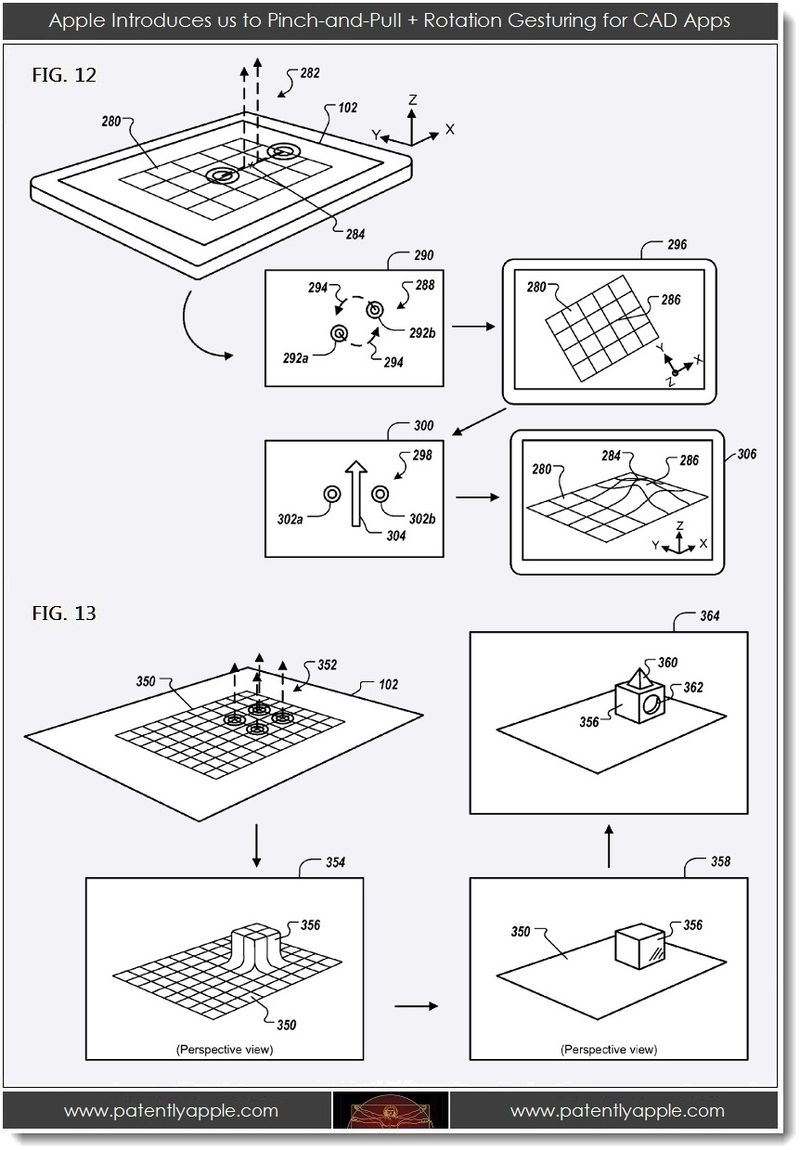 Apple credits Nicholas King and Todd Benjamin as the inventors of this patent which was originally filed in Q1 2010. To review more on this patent, review our July 2011 report.

Apple is Granted a Patent for Camera Auto Focus Features

The data storage stores a table with multiple entries, each entry including a face size and a corresponding lens focus position. The processor performs an autofocus operation when taking a picture, in which the processor detects a face in an image captured by the image sensor. The size of the detected face is then calculated. A stored lens focus position is selected from the table in storage, based on the calculated face size. The moveable lens system is then signaled to move to a final lens position, which is the selected lens focus position. This enables the moveable lens system to jump directly to a lens position that is expected to result in a sharp picture of the scene, without having to go through a full sweep of lens positions. 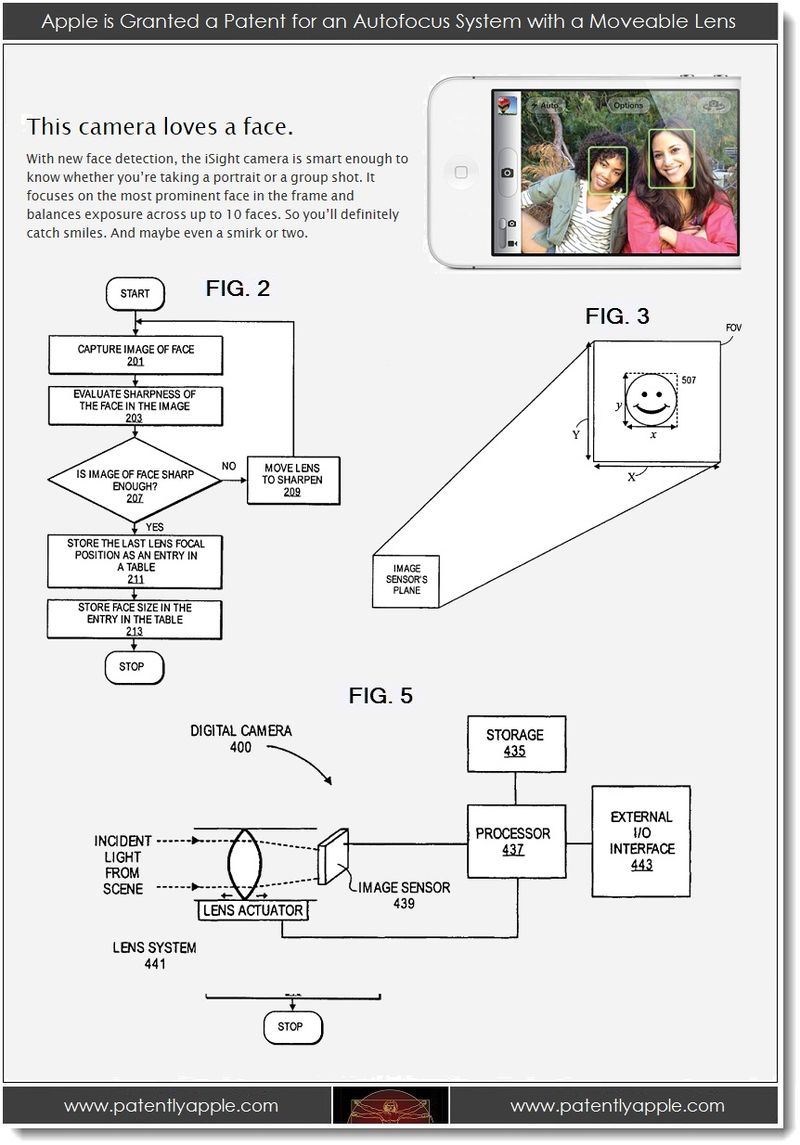 Apple credits E-Cheng Chang as the sole inventor of this patent which was originally filed in Q1 2009. To review this patent and its 21 patent claims see granted patent 8,233,078.

Apple Receives a Granted Patent for the iMac's Back Hinge Mechanisms

Apple has been granted a patent for the iMac's hinge mechanisms. More particularly, the invention relates to hinge mechanisms adapted to rotatably couple components in unique ways. 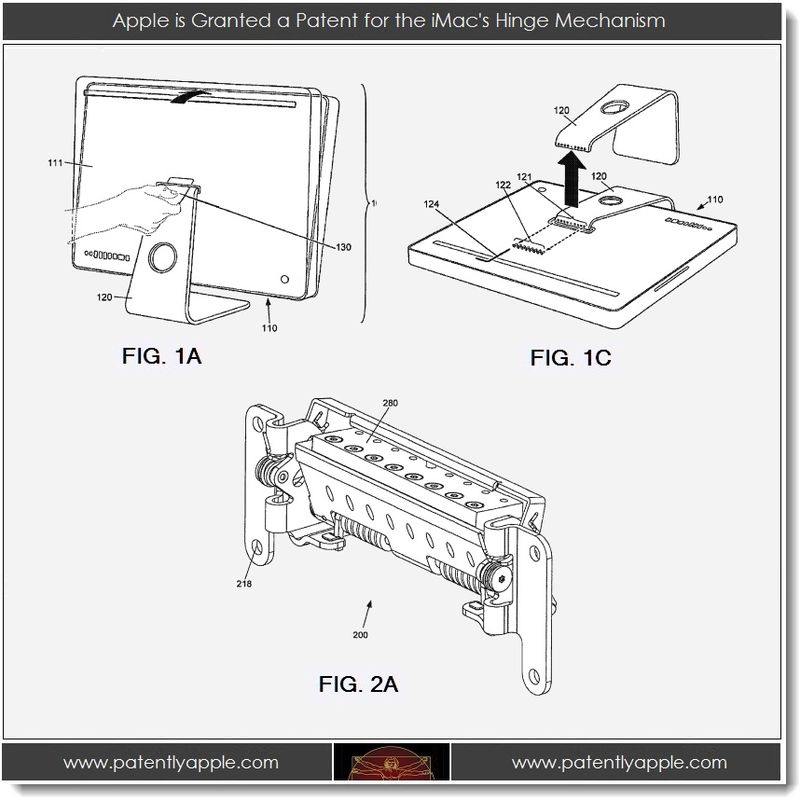 Apple credits Brett Degner, John Ternus and Andy Lauder as the inventors of this patent which was originally filed in Q1 2007 and re-filed in Q1 2011. To review this patent and its 22 patent claims, see granted patent 8,230,553.

Apple has been granted both a patent for the MacBook under the titled "Portable computer display housing" and a design patent for their now defunct MacBook. Interesting to note that the patent's port configuration illustrated below doesn't seem to match what the MacBook actually ended up with. 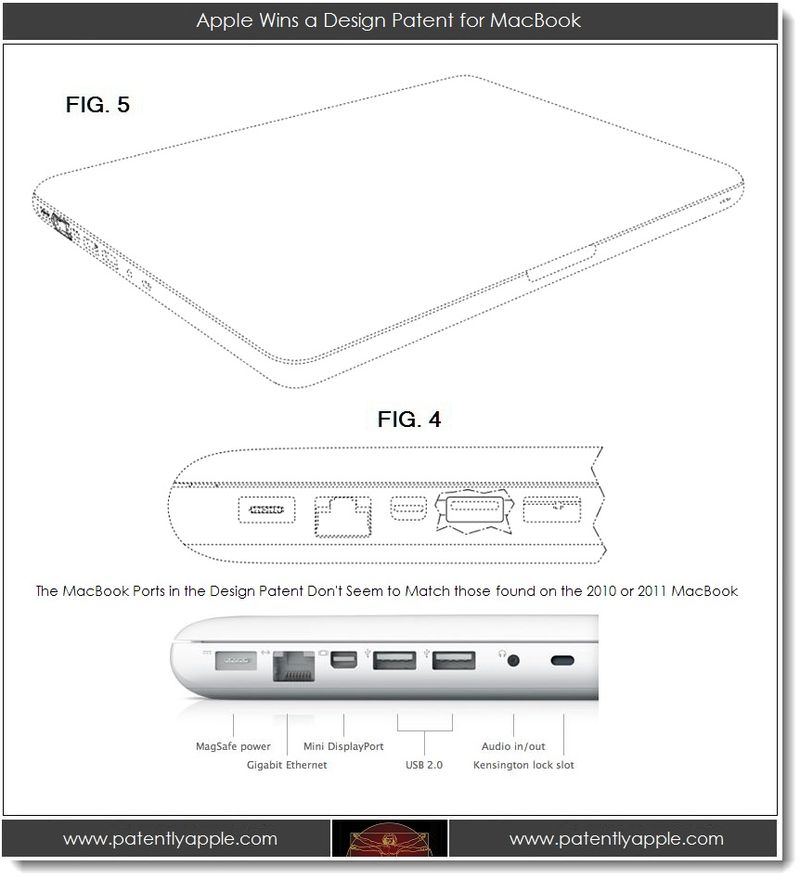 8,234,572 Remote access to advanced playlist features of a media player

Apple's Abstract: A media player can have advanced-playlist creation capabilities such as the ability to automatically generate a playlist around a "seed" song selected by a user. In some embodiments, the accessory can determine whether the media player can use a particular song as a seed song for an advanced playlist and can so inform the user. The user can then operate the accessory's user interface to create an advanced playlist based on a particular song, rather than having to interact directly with the media player.

8,234,392 Methods and apparatuses for providing a hardware accelerated web engine

8,234,692 - System and method for processing an upload of a program with export compliance information