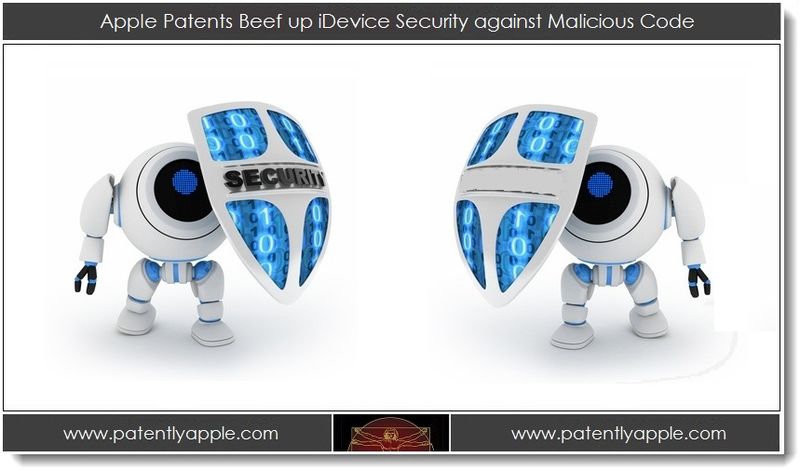 Back in January Peter Oppenheimer stated that the iPad was continuing "its unprecedented adoption in business. And as more businesses adopt iPads, Apple needs to ensure corporate IT departments that their security meets higher standards. Last week four new security patents came to light and were captured in our report titled "Apple Advances Security System Technology for the Enterprise." Today, four additional security patents have been published by the US Patent and Trademark Office that cover systems and methods for tamper-resistant booting, fighting against malicious code aimed at portable devices and more.

Security concerns for all types of processor-based electronic devices, and particularly for computing devices, have become significant. While some concerns may relate to detrimental actions which may be undertaken by defective code implemented by such devices, the greater concerns relate to the ramifications of various types of attacks made upon such devices through malicious code, including code conventionally known in the field by a number of names, such as "viruses", "worms", "Trojan horses", "spyware", "malware", and others. Such malicious code can have effects ranging from relatively benign, such as displaying messages on a screen, or taking control of limited functions of a device; to highly destructive, such as taking complete control of a device, running processes, transmitting and/or deleting files, etc. Virtually any type of imaginable action on a processor-based device has been the subject of attacks by malicious code.

Many of these attacks are directed at computing devices, such as workstations, servers, desktop computers, notebook and handheld computers, and other similar devices. Many of these computing devices can run one or more application programs which a user may operate to perform a set of desired functions. However, such attacks are not limited to such computing devices. A broader group of various types of devices, such as cell phones; personal digital assistants ("PDAs"); music and video players; network routers, switches or bridges; and other devices utilizing a microprocessor, microcontroller, or a digital signal processor, to execute coded instructions have been the subjects of attacks by malicious code.

A number of methodologies have been used in an attempt to reduce or eliminate both attacks and influence of malicious or defective code. Generally, these methodologies include detection, prevention, and mitigation. Specifically, these methodologies range from attempts to scan, identify, isolate, and possibly delete malicious code before it is introduced to the system or before it does harm (such as is the objective of anti-virus software, and the like), to restricting or containing the actions which may be taken by processes affected by malicious or defective code. However, such restrictions typically are configured statically based on a set of rules set forth in a security profile. Such statically configured rules do not always represent the dynamic conditions of an operating environment at runtime. 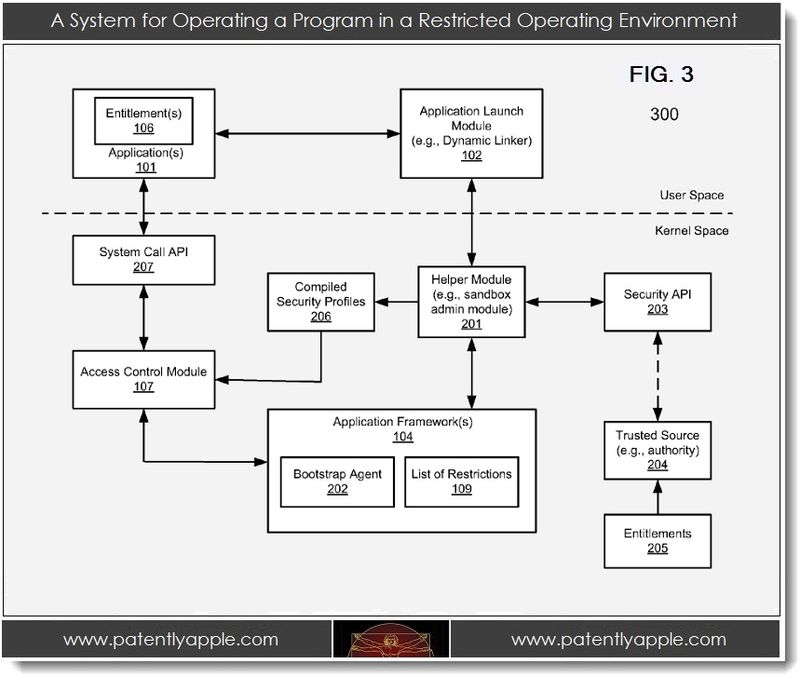 Apple's patent FIG. 3 is a block diagram illustrating a system for operating a program in a restricted operating environment according to one embodiment of the invention.

Although FDE is considered more secure than file-level encryption, systems with FDE employed are still vulnerable to attack. In one simple attack, a hacker can change the boot sequence of a computing device so that it boots from the hacker's own malicious code instead of performing the normal boot sequence. FDE systems must prompt the user for a password at boot time in order to unlock the FDE volume. The hacker's malicious code can display an identical looking screen that asks for the FDE password, but steals it instead of using the password to unlock the FDE volume. When the user enters the password, the hacker logs it and gains access to the computing device. The hacker can therefore surreptitiously steal the user's password. Without a chain of trust from the booter to the operating system kernel, such attacks are able to defeat even full-disk encrypted computing devices.

Apple's invention titled "System and Method for Tamper-Resistant Booting" relates to systems, methods, and non-transitory computer-readable storage media for booting a computing device having an encrypted storage medium using full disk encryption, referred to as tamper-resistant booting. One way to remedy the attacks outlined above is called tamper-resistant boot. When a computing device employs a high-security mode such as FDE, it should be more difficult for a hacker to change the boot sequence than when operating under lower-security modes. However, even in a computing device with an FDE-enabled storage medium, the operating system kernel is not encrypted. This is because the boot environment is not sufficiently complex to decrypt FDE volumes. Instead, the boot environment must rely on an operating system kernel to do the decryption. The unencrypted operating system kernel is an obvious weak link in the overall FDE security model, as it can be surreptitiously replaced with malicious password-stealing code by an attacker. One way for a computing device to address this deficiency is to verify the authenticity of the boot sequence by establishing a chain of trust from the firmware to the kernel in the operating system. A system receives at a boot time credentials associated with a volume key for a FDE enabled encrypted storage medium from a user. The system retrieves the unencrypted kernel and unencrypted kernel cache digest from the storage medium. The system then verifies that the kernel cache is authentic by comparing the retrieved kernel cache digest with a computed digest. Initiation and execution of the operating system is performed if the system determines that the kernel cache is authentic. The system produces an error if the kernel cache is not authentic.

Additionally, the system initializes tamper-resistant booting by establishing a database that stores password verifiers. The operating system generates a list of users that are authorized to disable tamper-resistant booting and sends the list to the firmware. The operating system generates password verifiers for each user and sends them to the firmware as well. The firmware stores this database in non-volatile random access memory (NVRAM). The system also generates a system salt in the firmware and stores the system salt in NVRAM for later use. The principles disclosed herein apply to a computing device having an encrypted storage medium using full disk encryption. 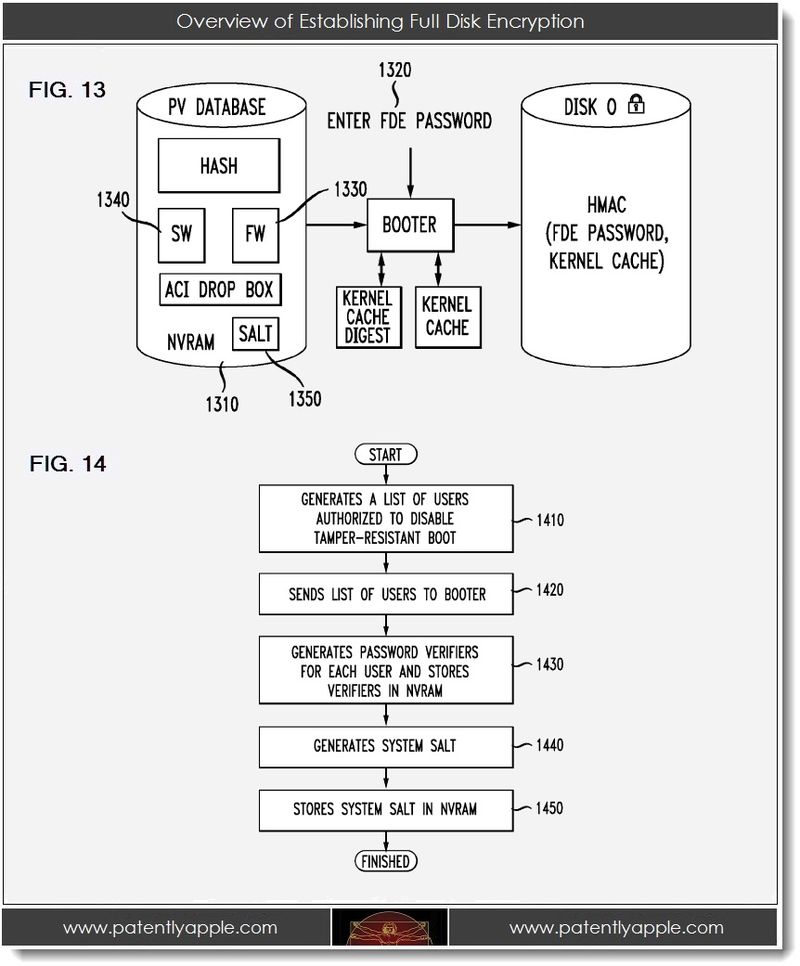 For more details on this security patent, see application 10120185683. Apple's patent application was originally filed in Q1 2011 by inventors Ivan Krstic and Joel Even.

A third security patent application was published today under the the number 20120185872 titled "Methods for Managing Authority Designation of Graphical User Interfaces." A fourth security patent application was discovered later this morning under applicaiton number 20120185700 titled "System and Method for Supporting Just in Time (JIT) with Randomly Allocating Memory Changes."

In addition to the two security patent applications presented in today's report, the US Patent and Trademark Office did publish a series of older continuation patents dating back to between 2006 and 2009. The continuation patents that we list below are specifically referenced as such under the section titled "Cross-Reference to Related Applications." Generally speaking, continuation patents represent tweaks made to patent claims in an effort to get the patents granted by the USPTO and don't represent any noteworthy new development from the original patent filing. Here are today's continuation patents should you wish to review them:

Time Compression/Expansion of Selected Audio Segments in an Audio File