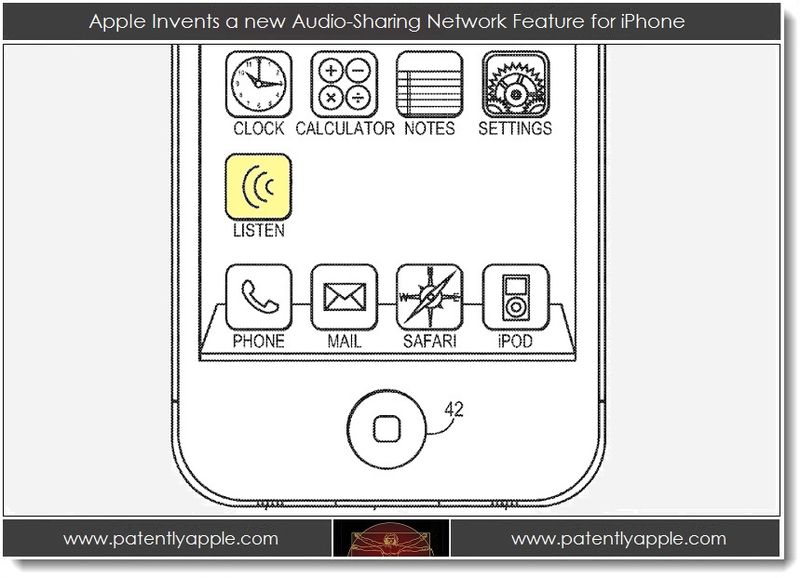 Last week Apple filed a detailed patent application relating to a new iPhone audio-sharing network concept. While the filing touches on hearing aid technology, it is by no means limited to that narrow definition. Another application applies to teleconferencing, for example. In fact, one of the benefits of this technology relates to a "conference telephone." The technology is designed to cut out background murmurs and general noise while executives discuss business with distant colleagues and/or potential clients. At the end of the day, the patent relates to both students and the enterprise. Yes, the Devil is in the details.

In Apple's first scenario, they describe the use of an iPhone within the context of an audio-sharing network. If a group of iPhone users are scattered throughout a lecture hall and they collectively turn on their iPhone's audio-sharing network feature by clicking on a homepage icon (see below in FIG. 2), they would experience an enhanced audio experience. By collecting and sharing ambient audio, some of which may be pertinent (e.g., the lecturer's comments and/or questions from those in attendance) and some of which may not be pertinent (e.g., murmurs, faint sounds, noise, and so forth) the audio experience can be enhanced. 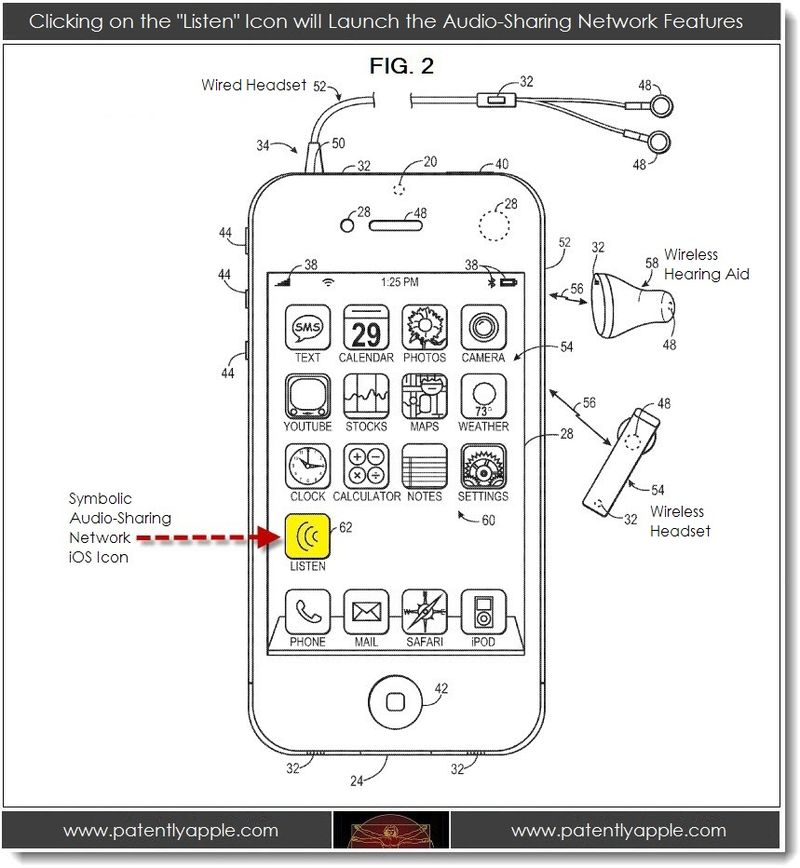 For example, as shown in patent FIG. 15 below, many sounds may be present in the university lecture hall 90 setting, only some of which may be desirable to students 94 sitting in the lecture. For example, a student in the back of the lecture hall may ask a question (at the back # 270) to which the lecturer (at the front # 92) may respond with an answer (# 272). Although the students may primarily desire to hear the question and the answer, other sounds may be present, such as random noise (#274), a murmur (#276), and/or other faint sounds (#278). 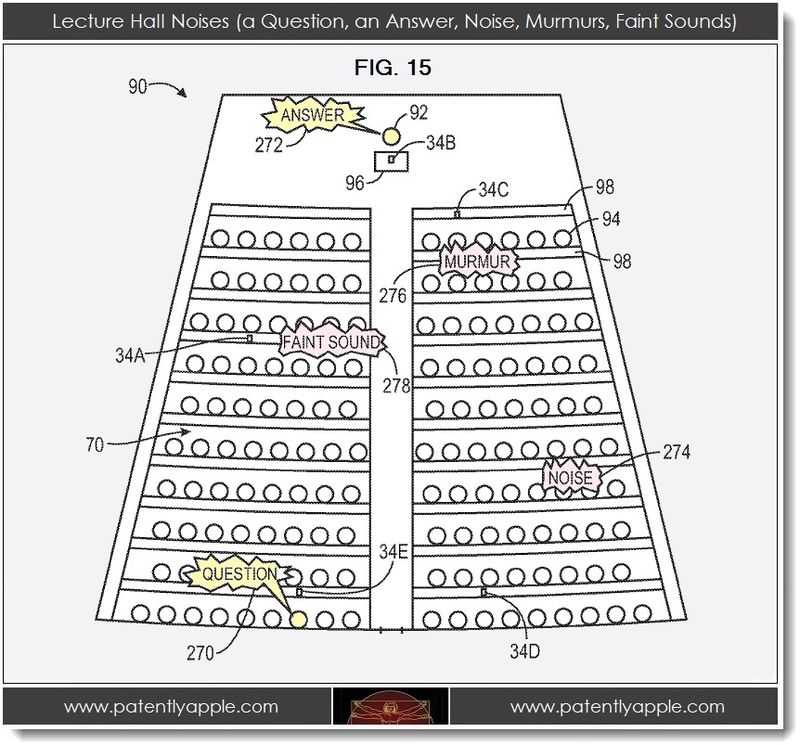 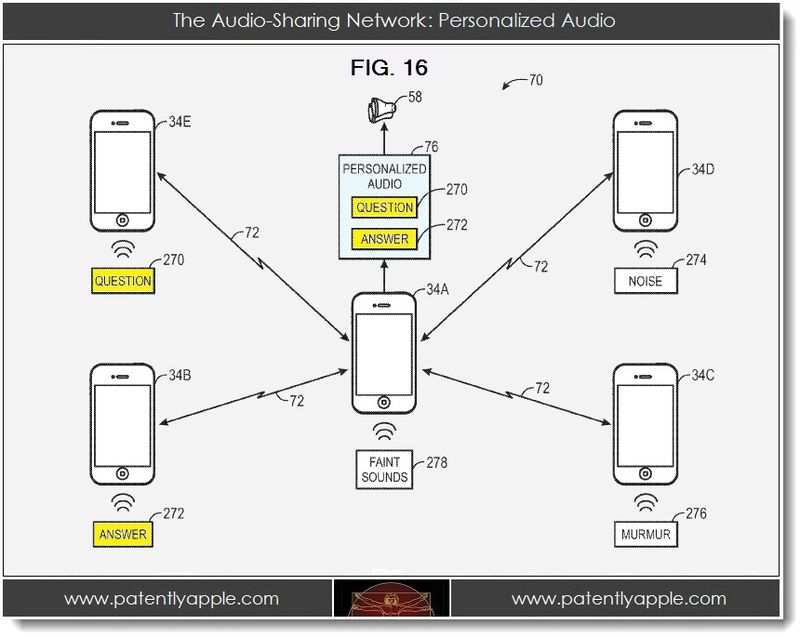 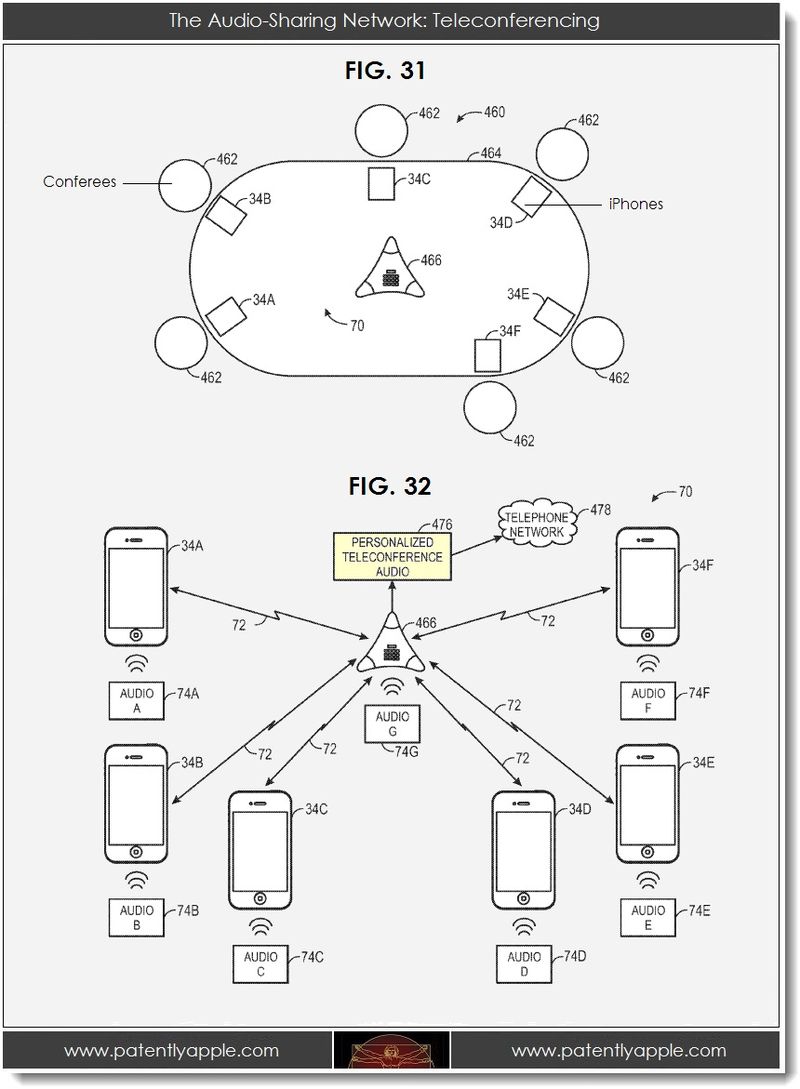 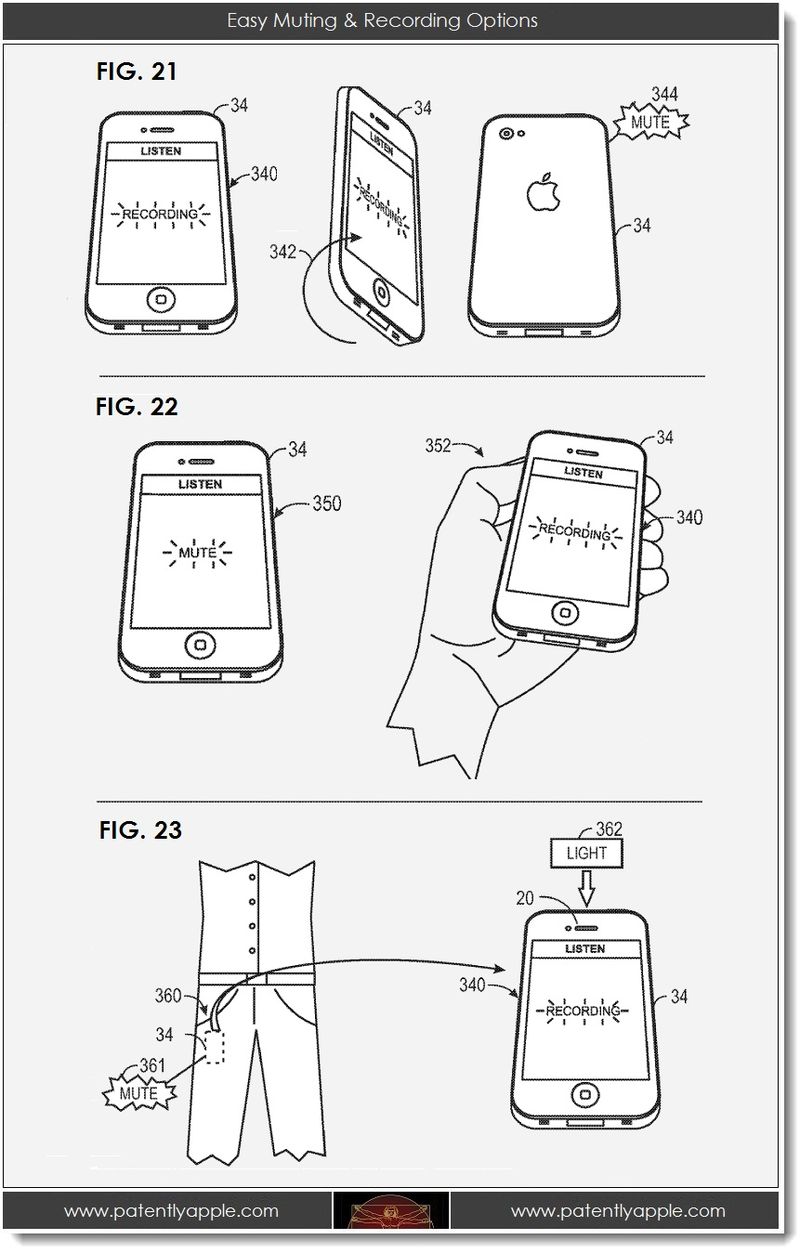 In the last scenario, a user may keep their iPhone in a pocket, away from the light, when it's not in use. Accordingly, in some embodiments, the iPhone is a member of the audio-sharing network and may remain muted (361) while in a user's pocket, as shown in patent FIG. 23. When the user removes their iPhone from the user's pocket 360 (e.g., to ask a question or otherwise participate in a conversation), the ambient light sensor 20 of the iPhone may detect light 362. When the quantity of light exceeds a threshold, indicating that the iPhone is no longer ensconced in a pocket, the iPhone may begin to obtain and/or provide audio to the audio-sharing network. The iPhone may also display the screen 340, indicating that the handheld device is now obtaining such audio.

Apple's patent filing goes through the joining of an audio-sharing network step by step and in great detail. Yet for our report we just wanted to point out that one of the process options of joining the audio-sharing network involves an NFC application as pointed out in patent FIG. 27 whereby a user could join the network quickly by simply tapping their iPhone with someone already on the audio-sharing network. Else the user would have to go through the entire process using a password and public encryption key. One of the reasons for the tight security is so to ensure that no one could electronically eavesdrop on your group's conversations. 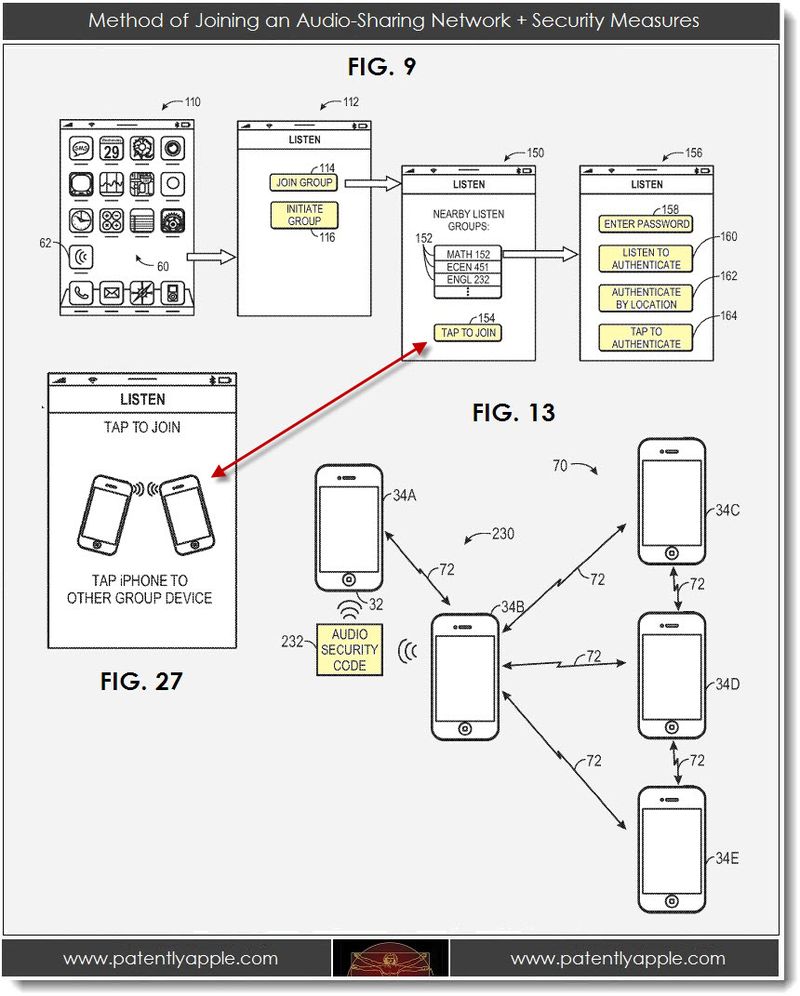 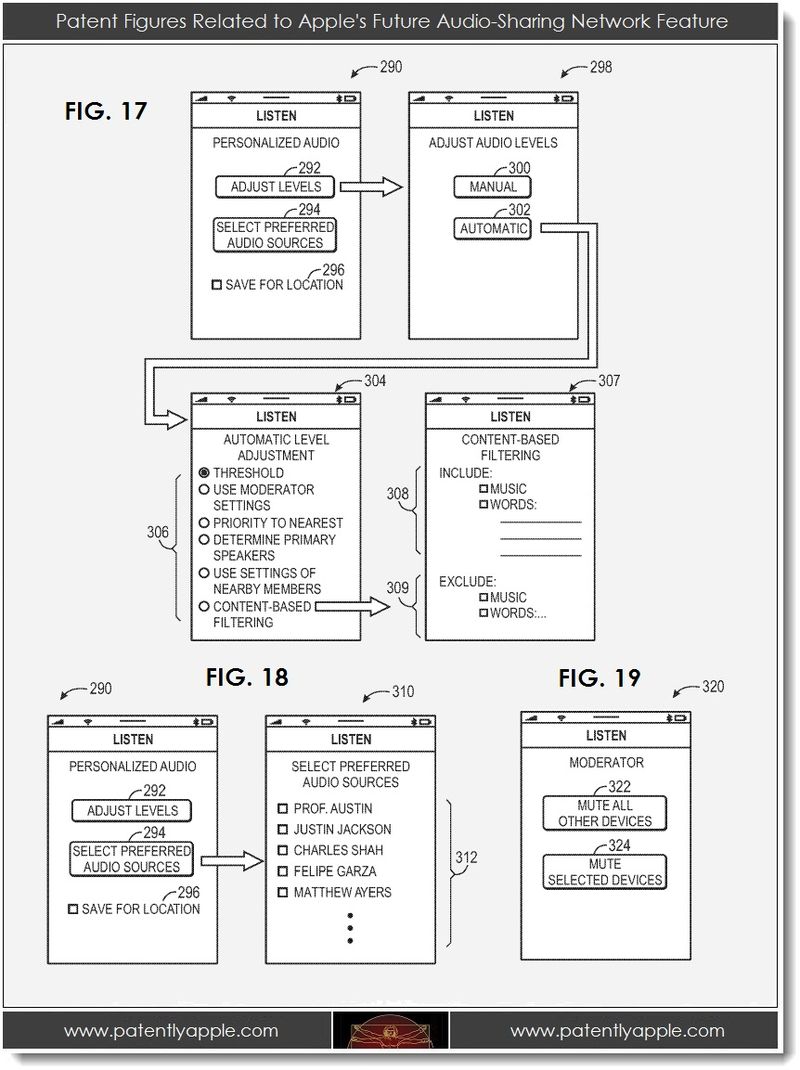 Apple's patent application was originally filed in Q1 2011 by inventor Gregory F. Hughes and published by the US Patent and Trademark Office last Thursday, July 26, 2012.

wow this is great news our students that have a hearing impairment !!!