Apple Invention Allows Smart Card to be used in iDevices 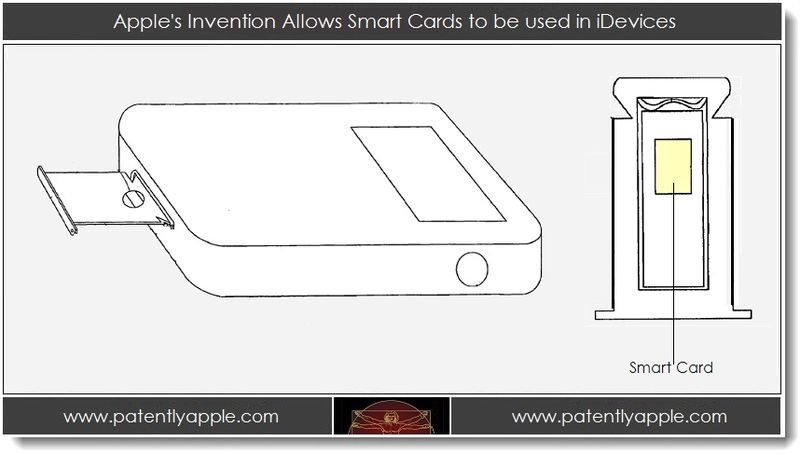 On July 12, 2012, the US Patent & Trademark Office published a patent application from Apple that reveals their intent to build an ejectable tray into future iDevices, including the iPod touch, which will accommodate specialty modules such as a smart card. Apple has updated this patent which was actually granted to them in March of this year. The activity involving this patent is a great sign that Apple may be putting the final touches on this feature before bringing it to market. The European Telecommunications Standards Institute (ETSI) recently approved Apple's Nano SIM which opens the door for Apple's future iWallet application to come to market. Apple's current patent goes beyond just smart cards and will allow future iDevices to store data on flash cards and beyond. 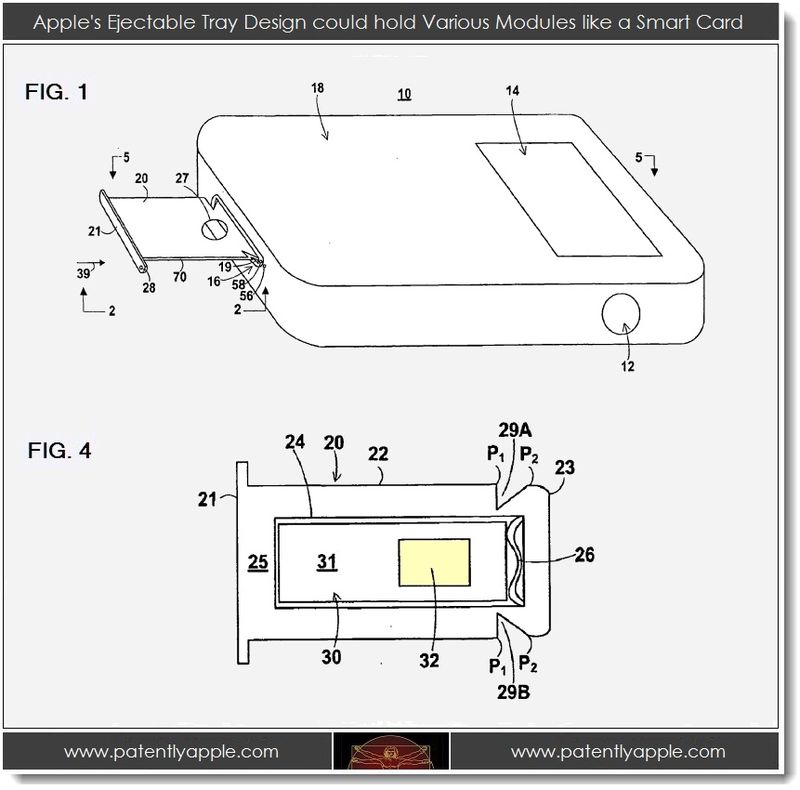 Apple's patent FIG. 4 above illustrates electronic circuitry 32 could be any integrated circuit (IC), such as a microchip, silicon chip, or computer chip, that generally includes semiconductor devices and passive components that have been manufactured in the surface of a thin substrate of semiconductor material on surface 31 of module 30, such that device 10 may read data from or write data into the circuitry when module 30 is inserted into the device using ejectable component assembly 16.

Apple states that the ejectable component assembly may be any assembly that inserts into and ejects from the device a removable that may be of a variety of forms, including, but not limited to, integrated circuit cards (ICCs), chip cards, memory cards, flash memory cards, microprocessor cards and/or smart cards such as subscriber identity module (SIM) cards, or any combination thereof.

Apple's patent application was originally filed in late March 2012 by inventors Erik Wang, Sean Murphy, Tang Tan, Lawrence Davis and Sung Kim and published today by the US Patent and Trademark Office. It should be noted that Apple thought that this technology and feature was important enough to have filed a provisional patent back in 2007 to secure the idea in principle. In today's patent application, Apple claims the benefit of U.S. Provisional Application No. 60/878,805. For more information see patent application 20120176753.