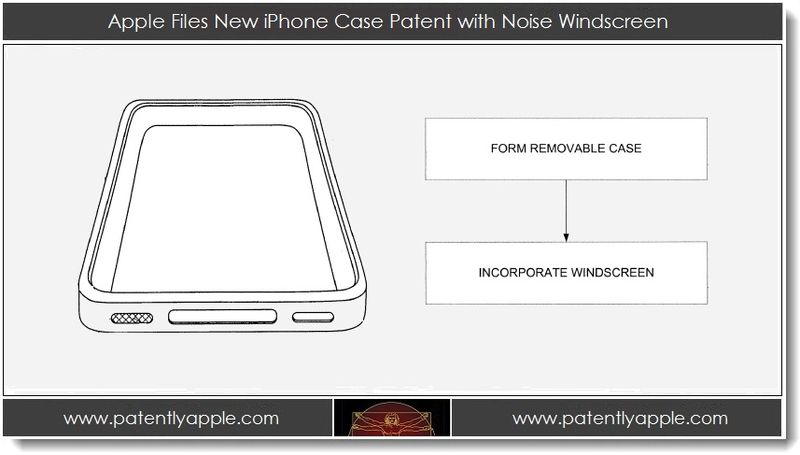 On July 12, 2012, the US Patent & Trademark Office published a patent application from Apple that reveals a new iPhone case accessory that will come with a built-in noise windscreen. This may sound like a minor feature but it will be greatly appreciated by consumers of older iPhones. On a personal note, my wife phones me after work at a downtown location every day on her 3G iPhone. Almost every day I tell her that I hear the people talking around her louder than her own voice. It's one of the reasons that I've held back on buying an iPhone for myself. Yes, it's that annoying. So while this patent may be for an iPhone accessory case today, it may also indicate that this will become a standard iPhone feature in the future. One could only hope.

Handheld mobile communications devices, particularly mobile phones, have enabled users to engage in real-time two-way conversations while walking, running, riding in a car, or during other activities. In a number of these situations, a user may be conducting a conversation in a noisy environment, such as outside in the wind or inside a moving car with its window down. Background noise, e.g., wind noise, can be picked up by the device's microphone and combined with the user's speech. The other party to the conversation constantly hears the background noise and thus may have difficulty understanding the user. As a result, the user often has to raise her voice and literally shout into the device's microphone to be heard.

A removable case for a handheld mobile communications device is described. The removable case includes an opening that aligns with a microphone port that is built into the device. A windscreen is sealed across the opening of the case. The windscreen is designed to reduce wind noise, air blasts, vocal plosives, and other noise. This may enable the speech of a user of the device to remain intelligible despite the presence of such noise during a call, and without requiring the user to shout into the device's microphone.

Apple's patent FIG. 1 shown below illustrates an example removable case 1 (also referred to as a skin, bumper, or cover) for the iPhone. The removable case 1 includes a shell 2 that houses and provides protection to the mobile device 10 that is placed inside the case 1. The shell 2 may be formed from one or more materials such as plastic, acrylic, polycarbonate, silicon, or rubber. The shell 2 may have a front lip 3, a side wall 4, and a back wall 5. The shell 2 is dimensioned to yield a snug fit once installed onto the iPhone. The front lip 3 may provide a securing mechanism for securing the iPhone within the shell 2. 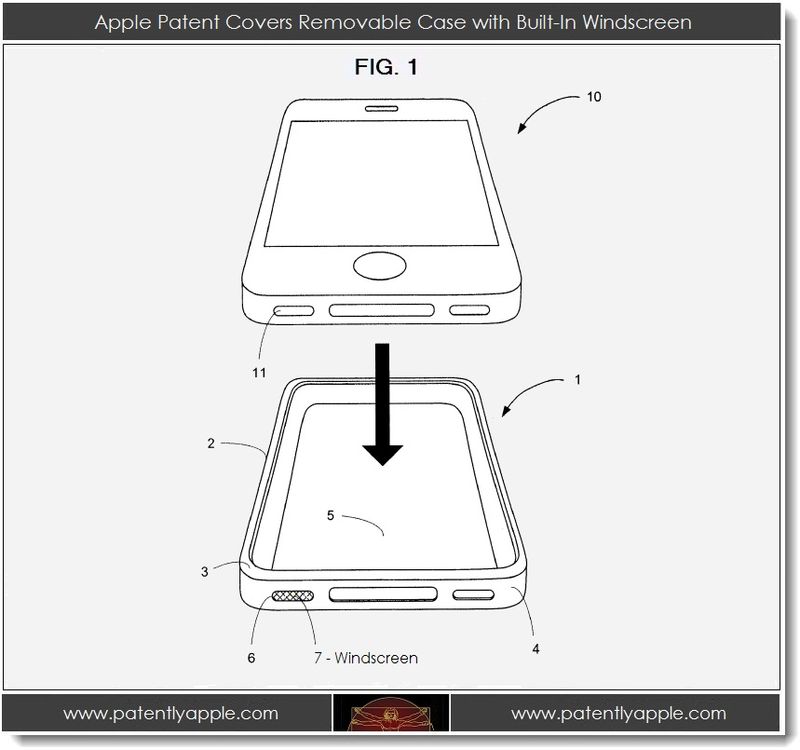 The windscreen may be made of a material that has an acoustic resistivity such that it reduces wind noise without significantly altering the user's voice. Examples of such material may be cloth, acoustic foam, porous plastics, or screen material. 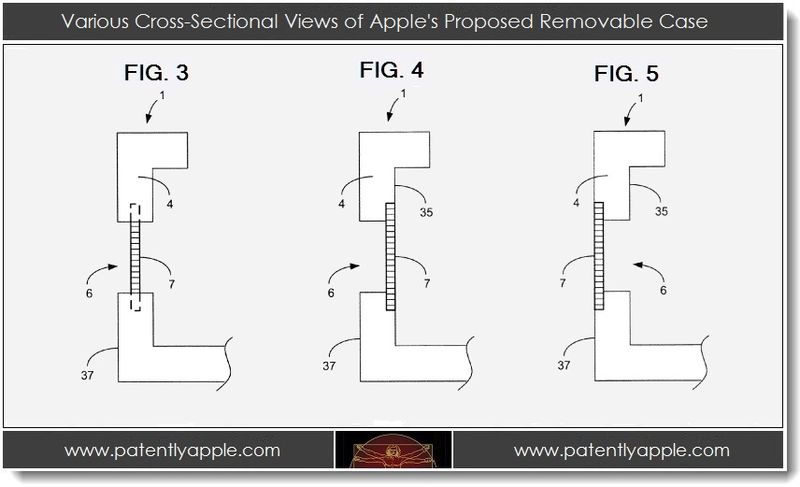 Apple's patent FIG. 4 is a cross-sectional view of the removable case 1 with the windscreen positioned on an interior (inside) surface 35 of the side wall 4 and adhesively attached to the interior surface.

Apple's patent FIG. 5 is a cross-sectional view of the removable case 1 with the windscreen positioned on an exterior (outside) surface 37 of the side wall 4 and adhesively attached to the exterior surface.

Apple's patent application was originally filed in Q1 2011 by the sole inventor Jae Lee and published today by the US Patent and Trademark Office.

Note to Referring Sites: We ask referring sites to limit the use of our graphics in this report to a single graphic of their choosing. Thank you for your cooperation.

2. Originally filed in 2008: Power Source having a Parallel Cell Topology

None of my Android phones have had this problem.

This sounds like a case of poor phone engineering, like the external antenna, which required a "bumper" case in order to even work.