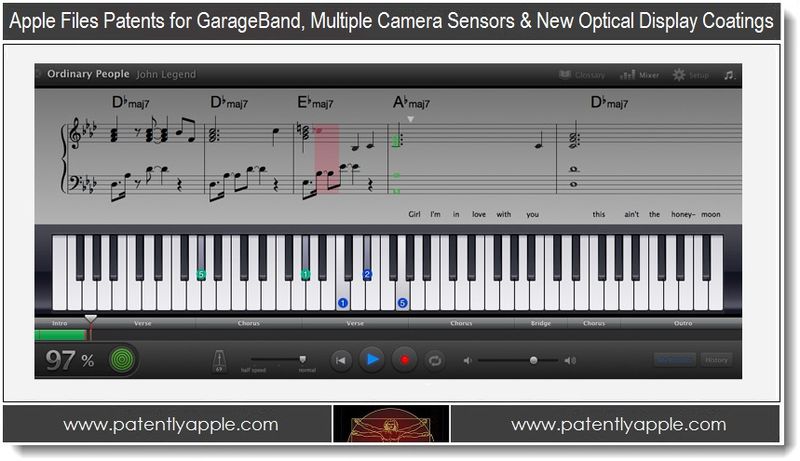 On June 28, 2012, the US Patent & Trademark Office published patent applications from Apple covering GarageBand, multiple camera sensors for iDevices, new optical display coatings and more. The US Patent Office has yet to publish the patent graphics for the patents we cover today. When they do, we'll update our report accordingly. Apple's dearth of patent applications now runs five straight weeks. Where oh where are Apple's talented engineers of late? This is the longest running patent drought since Patently Apple has covered Apple's patents.

Electronic systems for musical input or musical performance often fail to simulate accurately the experience of playing a real musical instrument. For example, by attempting to simulate the manner in which a user interacts with a piano keyboard, systems often require the user to position their fingers in the shapes of piano chords. Such requirements create many problems. First, not all users know how to form piano chords. Second, users who do know how to form piano chords find it difficult to perform the chords on the systems, because the systems lack tactile stimulus, which guides the user's hands on a real piano. For example, on a real piano a user can feel the cracks between the keys and the varying height of the keys, but on an electronic system, no such textures exist. These problems lead to frustration and make the systems less useful, less enjoyable, and less popular. Therefore, a need exists for a system that strikes a balance between simulating a traditional musical instrument and providing an optimized user interface that allows effective musical input and performance.

Apple's patent generally relates to systems, methods, and products for musical performance and/or musical input that solve or mitigate many of the problems of prior art systems. A user interface can present one or more regions corresponding to related notes and/or chords. A user can interact with the regions in various ways to sound the notes and/or chords.

In addition, other user interactions can modify or mute the notes or chords. A set of related chords and/or a set of rhythmic patterns can be generated based on a selected instrument and a selected style of music. The chords can be related according to various musical theories. For example, the chords can be diatonic chords for a particular key. Some embodiments also allow a plurality of systems to communicatively couple and synchronize. These embodiments allow a plurality of users to input and/or perform music together. 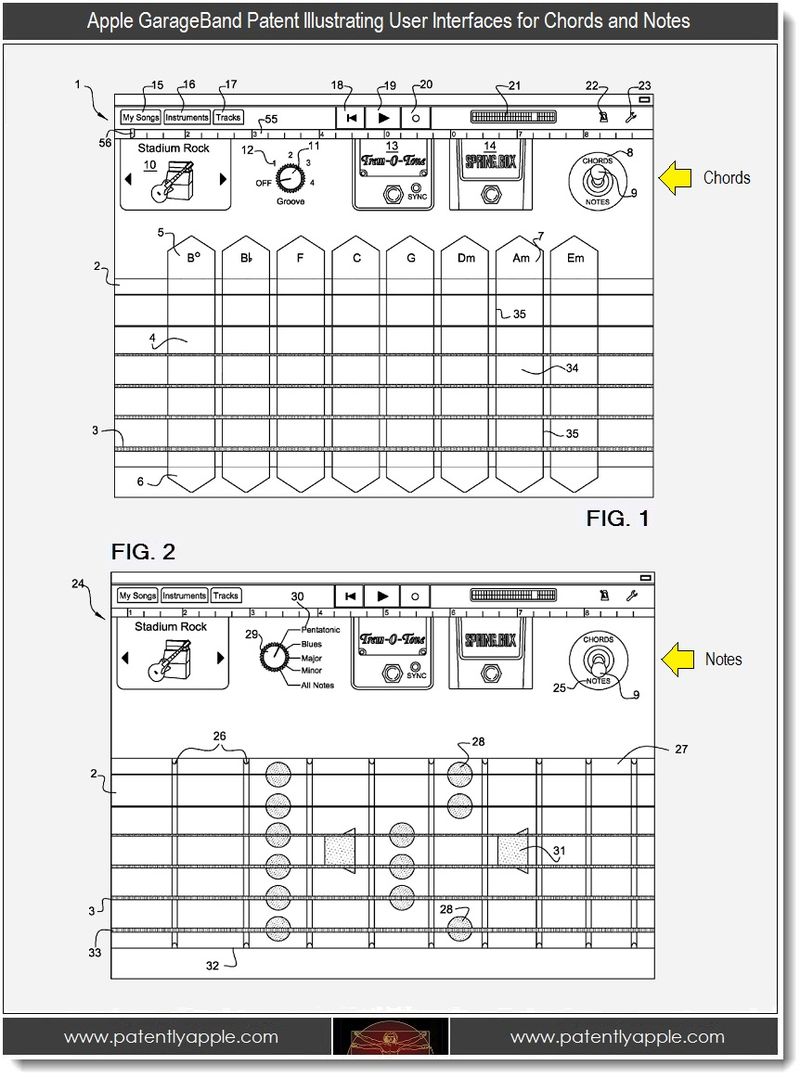 Apple's Abstract: An optical coating includes multiple layers of different materials and thicknesses and is disposed proximate a transparent display cover for an electronic device display. The optical coating transmits most visible light, reflects most non-visible light and substantially absorbs blackbody radiation generated from within the electronic device. The optical coating can be readily removable from the electronic device display either alone or in combination with a removable transparent display cover. The multiple layers comprise two or more materials having alternating low and high indices of refraction, and can include 36 or more layers, each having a thickness ranging from 10 to 400 nanometers. The arrangement and thicknesses of the layers are designed based upon the thickness and optical properties of the transparent display cover. 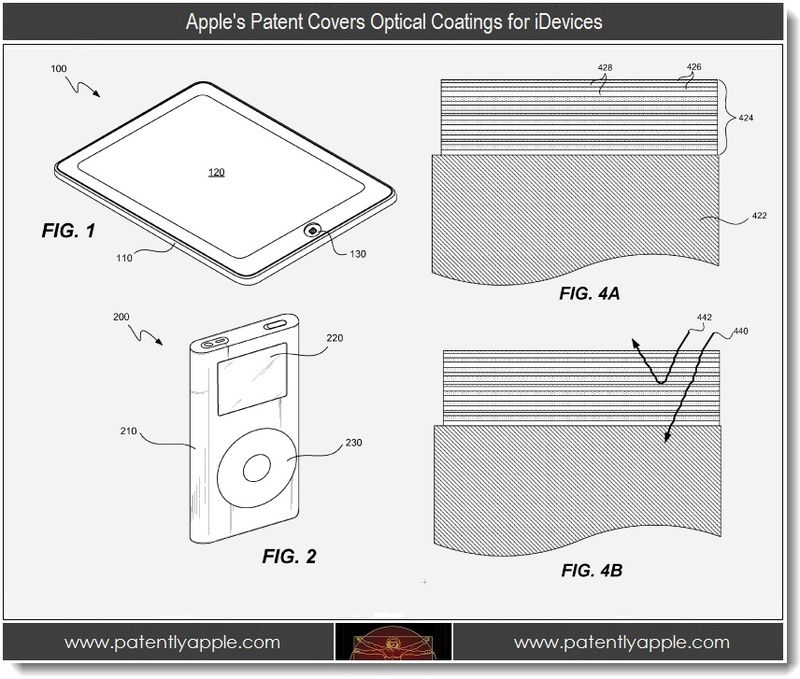 Apple's patent FIG. 4A illustrates an exemplary specialized ART optical coating for devices such as Apple's iPad. As shown, optical coating 424 can be situated atop or otherwise proximate to a display cover 422.  The optical coating can be comprised of numerous thin layers, ranging in thickness from about 10 to about 400 nanometers. Each layer can be comprised of a material having a high or low index of refraction, and the layers are preferably interleaved or alternated between high and low indices of refraction. Preferably, desirable wavelengths of light are transmitted through optical coating while unwanted wavelengths are reflected away from the optical coating, similar to that which occurs for a "hot mirror." Apple's patent FIG. 4B illustrates in partial side cross-sectional view the exemplary optical coating of FIG. 4A as transmitting a visible light wavelength and reflecting an infrared light wavelength. 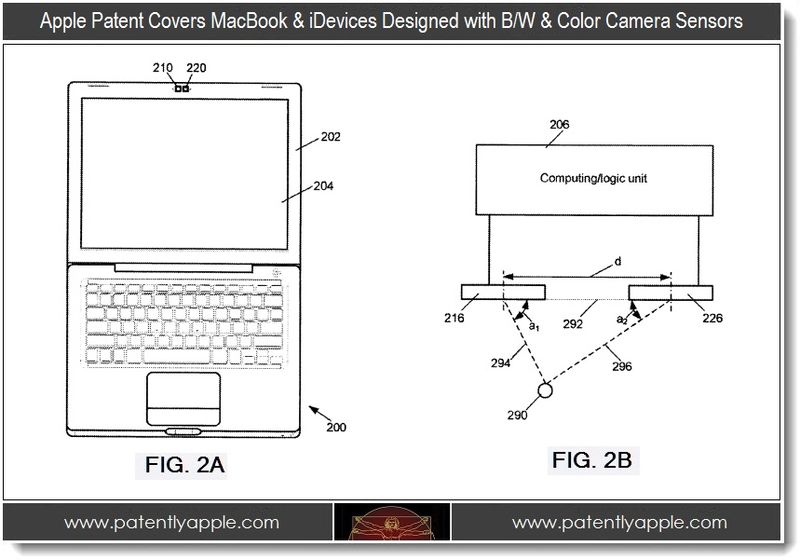 Apple's patent FIG. 2A illustrates a schematic representation of an electronic device, including a black-and-white camera and a color camera; patent FIG. 2B illustrates a schematic representation of a block diagram of an imaging system of the electronic device illustrated in the example of FIG. 2A,including a first sensor area, a second sensor area, and a computing/logic unit.

In addition to the X-amount of patent applications presented in today's report, the US Patent and Trademark Office did publish a series of older continuation patents dating back to between 200X and 200X. The continuation patents that we list below are specifically referenced as such under the section titled "Cross-Reference to Related Applications." Generally speaking, continuation patents represent tweaks made to patent claims in an effort to get the patents granted by the USPTO and don't represent any noteworthy new development from the original patent filing.

Apple won a preliminary injunction against the Samsung tablet yesterday and the battle between these two tech giants is ongoing. Considering that the battle has been ongoing, I found it interesting that Apple appears to be refilling old and current patents in Korea unlike never before. Below is a cleaned up and current search result for Apple that shows every one of the patents to have been filed in Korea under KR. Do you get the feeling that Apple is preparing for a long and ongoing war with Samsung? I'll take your silence to mean a yes (ha!). 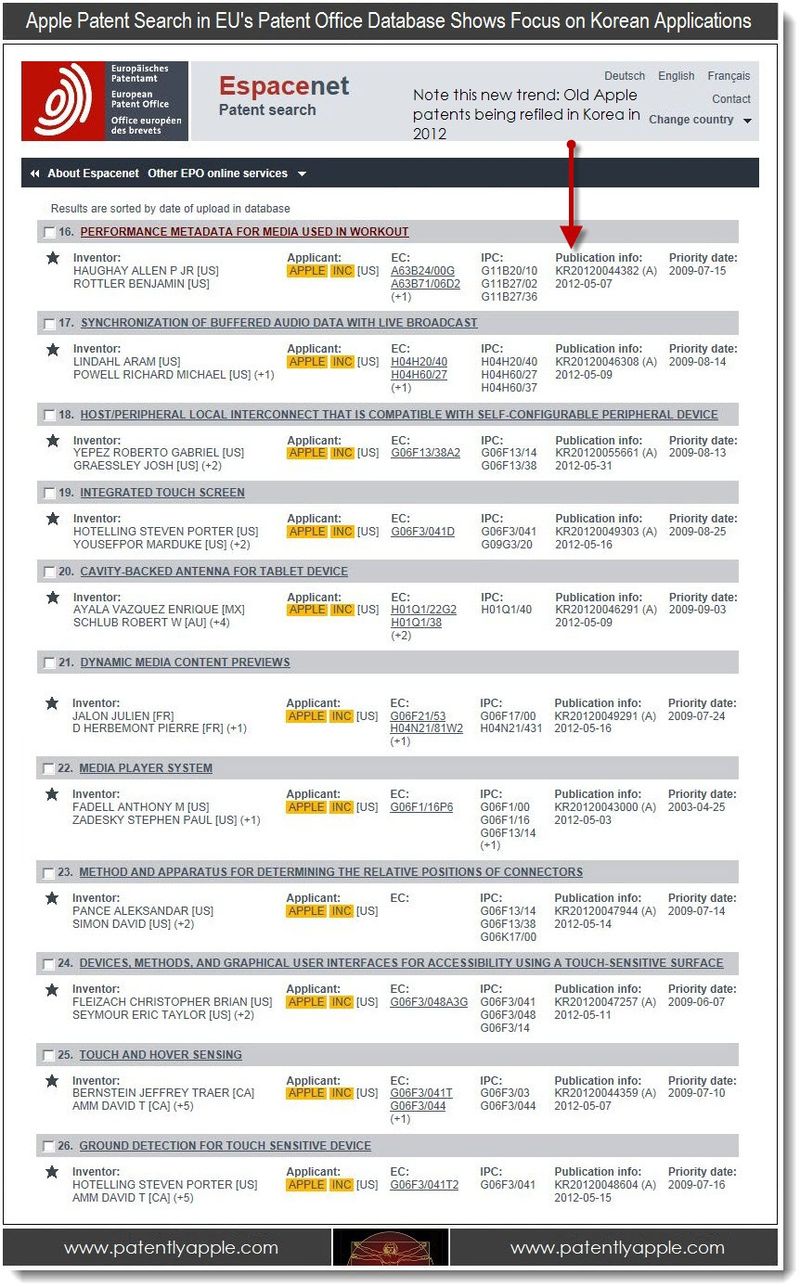