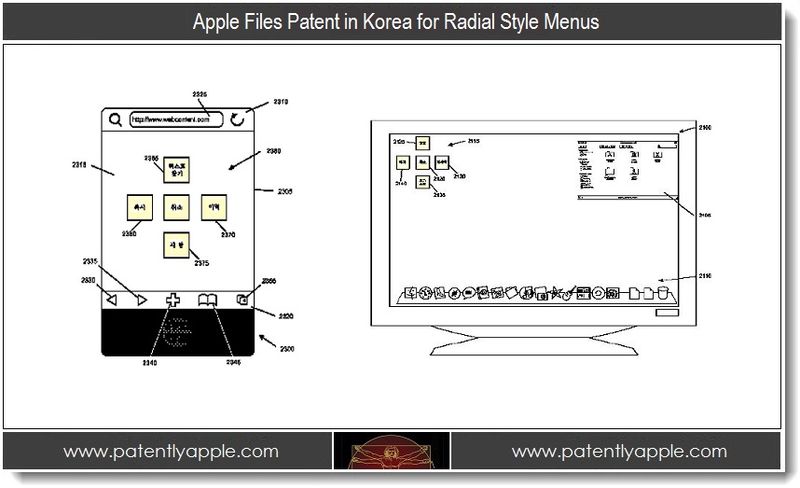 Patently Apple has discovered that Apple has filed a patent in Korea relating to Radial Menus that could apply to both OS X and iOS as is illustrated in our cover graphic. Apple states that their invention is "directed towards the presentation of menu or toolbar options in a graphical user interface. Specifically, the invention is directed towards presenting these options in a radial form." This is Apple's second patent application regarding this particular form of presenting menus and/or toolbars, though they have others that borrow from this theme that we link to in our report.

Today's brief report on Apple's Radial Menu patent application marks our second presentation on this subject matter. Our first report on this feature was posted back in late 2010. The only thing in common between the two patents is the very first paragraph of Apple's patent background, as you'll see. From there on in, the patent verbiage is completely different. The first patent application focused mainly on radial menus in use with graphic or video applications whereas their second patent is focused more on the mechanics of using the radial menu in general.

Apple's Korean filing was fairly large and detailed. However, due to the fact that the patent graphic verbiage was set in Korean, as you could see in our patent graphic below, and that the quality of graphics presented in the application so poor, we're unable to go into any real depth on the subject matter at this time. Therefore we'll present you with Apple full patent background and Summary as it was presented so that you could get the gist of Apple's application. 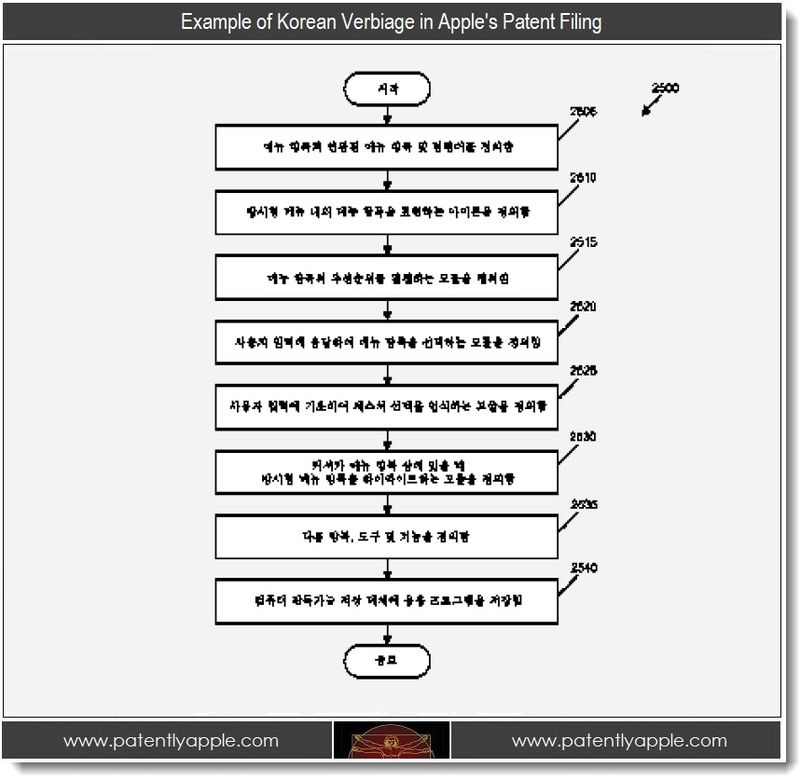 Such drop-down menus are often located at the top of a window in which an application is running. Accessing drop-down menus via a cursor controller involves moving a cursor to the top of the window with the cursor control device, then moving along to the appropriate top level menu item, selecting a submenu (if necessary), etc. Using a cursor to select items on a linear pull-down menu requires a user to move the cursor by a particular distance down the menu to reach the desired menu item. This could require moving a cursor through a considerable distance and with considerable precision required to reach the desired menu item without going past it.

Radial menus could provide desired menu selections without the difficulties inherent in drop-down menus. However, there is minimal use as of yet of radial menus in popular computing applications. Accordingly, there is a need for radial menus with improved features that will make such menus more desirable for users.

Some embodiments of the invention provide several novel techniques for manipulating radial menus in graphical user interfaces of an application. In some embodiments, radial menus include multiple selectable items arranged about an internal location (e.g., a center of the radial menu). The novel radial menu techniques of some embodiments include (i) non-uniform spacing of menu items, (ii) the use of shading or highlighting within a region associated with an item to indicate the present selectability of the item, and (iii) the use of radial gestures for opening sub-menus and the subsequent display of the sub-menu.

In some embodiments, the cursor referred to in the description above is an icon (e.g., an arrow) that is displayed on a screen. The icon is controlled by a user via a cursor control device (e.g., a mouse, trackpad, etc.) that the user interacts with in order to move the icon on the screen. The user also interacts with the cursor control device in order to generate other inputs such as selections (e.g., by clicking or double-clicking a mouse button). In other embodiments, however, the cursor is not displayed and is defined as a location at which a user is touching the screen (i.e., when the radial menu is displayed on a touchscreen). Thus, the cursor moves as a user's finger (or other object touching the touchscreen) moves, though no icon is actually displayed.

The Five Stages of the Radial Menu 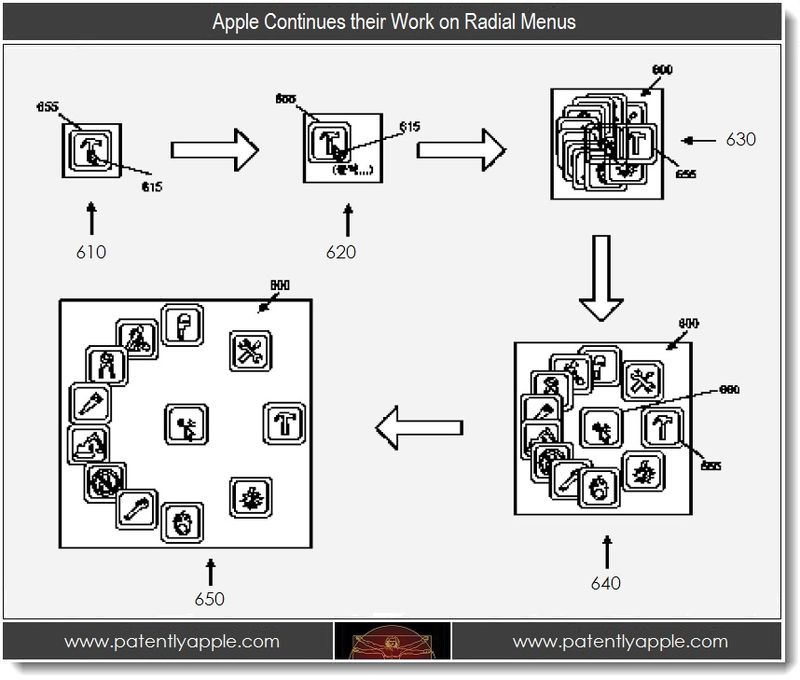 Apple mentions that radial menus could be used in a gaming application and if you look at our opening graphic and contrast it to another Apple patent graphic for a poker game, you begin to see that Apple is working on various angles for using radial menus as the patent application suggests. In the future, you might tap on a master folder on your iPad and have your subfolders appear in a radial menu so that you could find them quicker without the icon looking like a folder as they do today. It could be that a particular iApp has multiple levels to it. Tapping on the icon could bring up the various levels in radial form so that you could get to what you want quicker than opening the app and performing several steps to get to a particular segment of the app.

In 2006 Apple had iPhone patents published and of course they were rough concepts listing the basics of a smartphone. Many people said what's so different about this compared to this or that phone in the market at that time. And yet when it arrived, Apple had an unexpected GUI, iApps, and not just touch capabilities but multi-touch.

So it's a common hack to point to prior art and all of that nonsense in an effort to downplay anything that Apple is patenting. Yet knowing Apple, if and when radial menus arrive, they're likely be different, cooler and deliver something unique for Apple operating systems.

For now, how can anyone in the general public answer your question Tem? Neither of us have seen Apple's real end-user version of the radial menu. For now, it's a new menu style for a possible future OS. It's just a glimpse of what might be coming down the pipe. This article points to other patents floating around with related ideas. So for now it's a work in progress, not a product like you pointed to.

Radial menus have been around since at least 1995, I used them in Alias Studio on SGI (unix) workstations. There are a few other Apps that use radial menus currently, solidworks 2011 and 2012 (windows), and another (can't remember,sorry). Due to sleep deprivation I wasn't able to read all the article. I wonder what is so different from what's already been done on other OSs?