Is Apple Thinking of Resurrecting MacDraw? 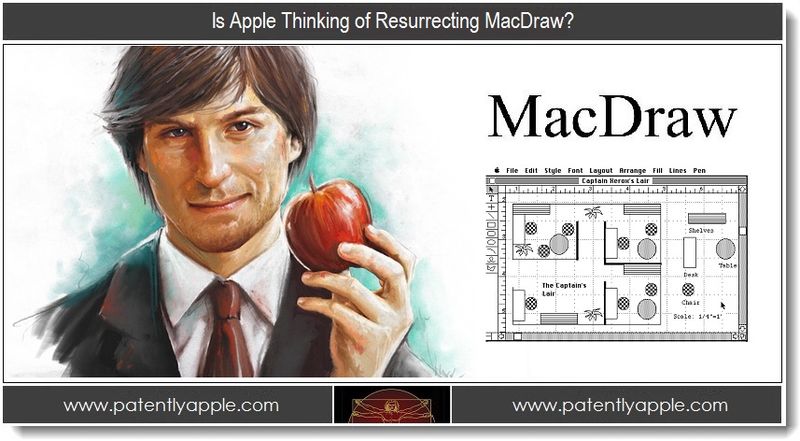 Two patent applications that were published in January and February 2010 illustrated how a future iteration of the Magic Mouse might support a new graphics and/or painting program from Apple. Today we learn, through a document filed with the US Patent and Trademark Office, that Apple might be thinking of resurrecting MacDraw. Note: This report was updated June 13, 2012.

According to Wikipedia, Apple's MacDraw was a vector based drawing application released along with the first Apple Macintosh systems in 1984. MacDraw was one of the first WYSIWYG drawing programs that could be used in collaboration with MacWrite. MacDraw was useful for drawing technical diagrams and floor plans. It was originally called LisaDraw because it was originally developed for the Apple Lisa computer which was released in 1983.

In a document filed with the Commissioner for Trademarks in April and only made public today, Apple requests an amendment to registration number 4101317. In their letter to the commissioner, Apple provides the necessary history to an error made in the registration: "On December 21, 2011, Dekorra Optics, LLC, the original applicant, assigned the MACDRAW application (Serial No. 85/251,543) to Apple Inc. (current owner). On January 9, 2012, we requested, and received confirmation of, the recordation of the assignment with the Assignment Division. On February 21, 2012, the application matured into a registration. The certificate of registration incorrectly identifies Dekorra Optics as the registrant." 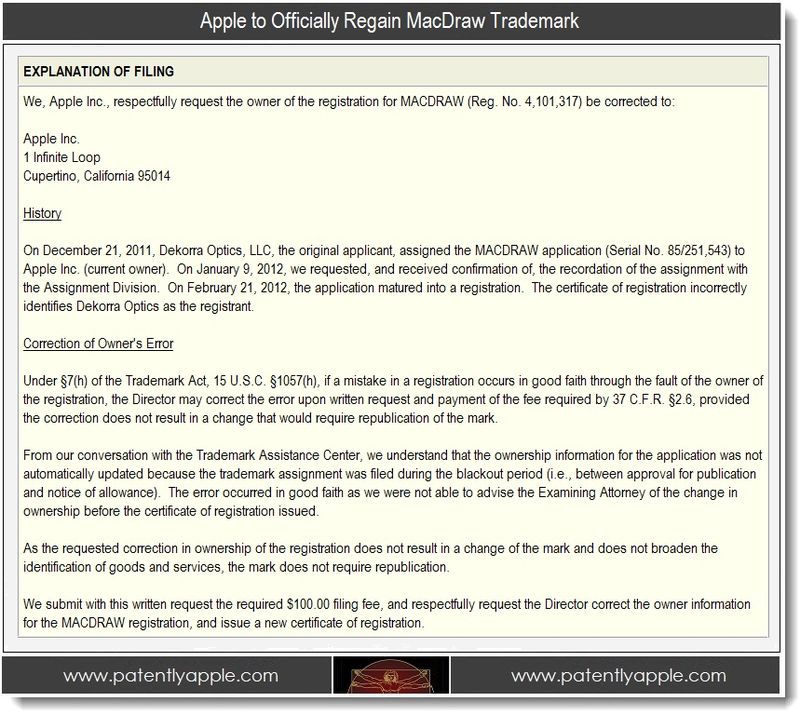 Apple notes in the document presented above, that the ownership information for the application was not automatically updated because the trademark assignment was filed during a blackout period (i.e. between approval for publication and notice of allowance). Apple respectfully requests that the Director correct the owner information for the MacDraw registration, and issue a new certificate of registration.

The obvious question becomes, did Apple take assignment of MacDraw for purely historical reasoning or is this an application that Apple is thinking of resurrecting at some point in the future?

Foxconn confirms work on an Apple's iTV and that the deal
with Sharp was all about this product as we noted in our March report.

9to5 Mac reports today that iOS 6 may debut Apple's own advanced 3D Mapping App. Such a move would support a number of Apple's inventions: One, Two and more. It would be great news if it comes to be.

I hope Revival of AppleWorks.

I hope they resurrect it. I'd buy it in a heartbeat. I'm still smarting from the demise of FreeHand.

I've been using Apple Computers since 1981 so naturally I remember the importance of Visicalc™ (the first spreadsheet); and I also remember (with great fondness) HyperCard™ and AppleWorks™. I miss them both and desperately wish someone at Apple would use some influence to get the company to begin producing updated versions of BOTH of those extraordinary software packages.

That's really a great illustration that Sam Spratt created. I'm so glad that I bumped into it this morning for the cover of this report. I must have looked at it a dozen times today.