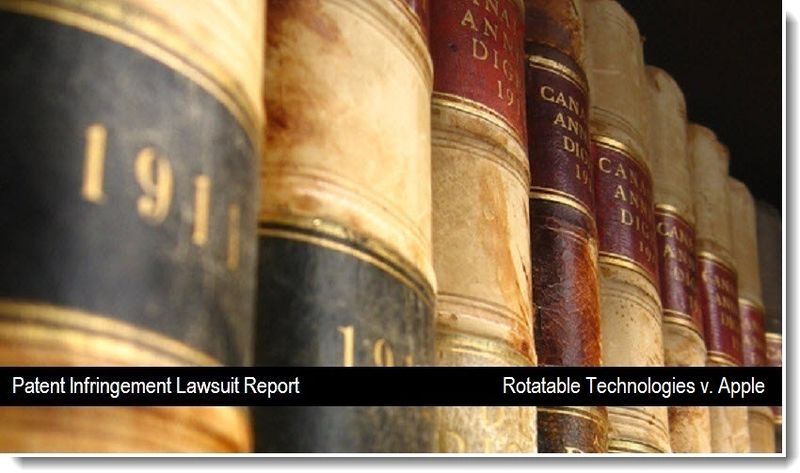 Texas based Rotatable Technologies is suing Apple for infringing on a 1999 patent that they acquired titled "Display Method for Selectively Rotating Windows on a Computer Display." The lawsuit claims that Apple's iPhone and iPad tablets infringe one or more claims of their patent. Rotatable Technologies also launched a similar lawsuit against Nokia earlier this month.

For those wishing to examine Rotatable Technologies patent's claims may do so by reviewing patent 6,326,978. Patent Figure 2 has been provided below for your convenience. 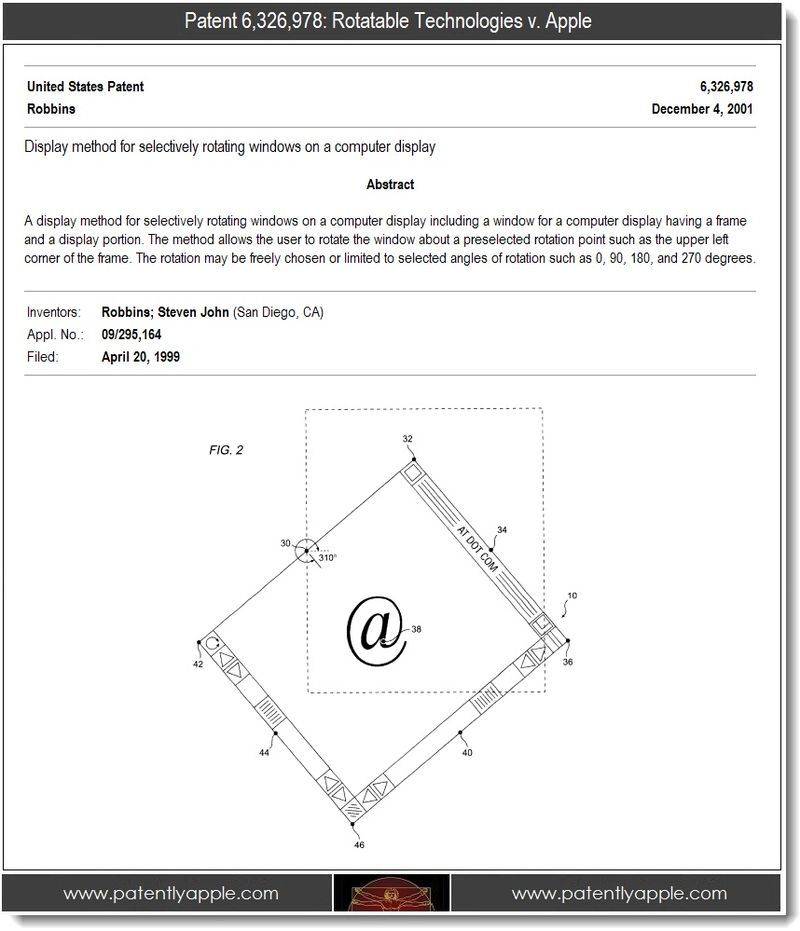 The case was filed in the United States District Court for Eastern Texas, Marshall Division. No Judge is noted as being assigned to this case.

anybody remember the Radius Pivot Display from perhaps the early 90s? You could turn a monitor and the display reconfigured itself from horizontal to vertical. only two possibilities though.

check it out here
http://www.youtube.com/watch?v=Dh5175Q4Vgo

As one of the named parties to this case, we're at least happy to be in the esteemed company of Apple, Whole Foods, Netflix and others. But this is just one more example of a patent system that is out of control - so now we must hire patent lawyers to defend a completely frivolous case (in our opinion)?

I kinda think rotating images of any content on a screen was done with television back in the 50's. Rotating images of any content digitally was slow but straightforward back in the 80's. Just take a display list and apply a rotation about a coordinate. The controls about the frame are just graphics and would be affected by display list rotation as much as the window content area, they only factor into things when you're interacting with them using a touch panel or a pointing device. I suppose it is possible that Xerox Parc hadn't messed with this by the late 70's.

The only problem is that iOS does not use windows!

Each apps is full screen, so the entire OS rotates, not the window.

Thanks for the humor AppleFUD! That's hillarious.

frackin apple. . . bunch of copycats, can't they innovate anything? do they always have to rip off others?!?!?!

This entire patent relies upon the Window Server and Drawing Composite Engine to produce the desired effect which requires the OS to manage the views and thus requires Apple patented work long before hand.

True John, but Trolls have been known to win many cases. It's like the lottery for lawyers. Take a chance, who knows?

Hi Oscar, any time you go from landscape to portrait on an iPad, you're rotating the window. So it's relevant.

The weird thing about this patent is the "freely chosen" rotation angle. The old displays rotated 90 degrees (landscape to portrait for full page viewing) but I never saw a monitor or OS that rotated a window at anything other than 90 degrees (never saw one rotate 180 degrees). Looking at the patent, I wonder if it applies to iOS devices since they don't use any of the following means to rotate the window:

What Apple product has rotatable windows like that? Why would you even want to rotate a window like they show.

Object have been rotatable like that since the MacPaint/MacDraw days.

Didn't Radius Pivot monitors do this back in the 1980s?

Here is a demo from Computer Chronicles:

Patent filed in 1999 so probably why.

Will be interesting to see of there's prior patents or usage to the patent.

It's interesting that this illustration is clearly a Mac OS window from before OS X. I wonder why?