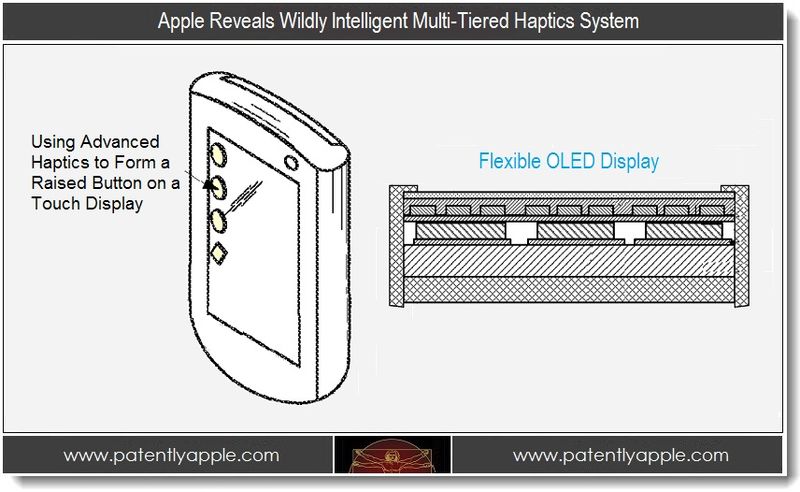 I love days like this when we get to see a new and exciting invention from the Crazy Ones in Cupertino. In March there was a rumor that the new iPad would include new advanced haptics that didn't' pan out. But make no mistake about it; Apple is hard at work on delivering such a feature in the future. Apple has filed haptic related patents in In March 2011 and 2012. Yet today's surprise invention packs a punch with a wildly intelligent multi-tiered haptics system. The system will actually allow an iDevice display to deform so that it could provide the user with a button, an arrow or even a geological map to physically pop right out of the screen to give it 3D depth. If that wasn't cool enough, Apple's patent discusses a flexible OLED display that could be used for video glasses. Updated May 04, 2012.

An Overview of General Haptics

Apple states that traditional tactile feedback systems provide a user with the ability to interact with a subsystem through touch or contact. Haptic systems facilitate these tactile interactions by using actuators, sensors, or both. Haptic systems are commonly used in robotics, video games (e.g., "rumbling" as used in some video game controllers), and other interactive systems which allow interaction via touch. An array of haptic elements is commonly used to provide touchscreen technology to users. Well, Apple thinks that it's time to advance haptics to an all new level.

Apple's latest invention relates to systems and methods for providing layered haptic controls. Haptic systems may be used for actuation such as vibration, shape change (e.g., contouring a flat surface), or other suitable actuations or combination of actuations which may provide tactile feedback to a user.

Haptic systems may also be used for sensing stimuli such as, for example, contact on a display screen, patterns of contact on a screen, shape changes, physical changes of a system or component, or other suitable stimuli or combinations of stimuli which may be received.

Apple states that their new invention may adopt a tiered haptic response approach in which one or more arrays of shape change elements may provide tactile interaction via an elastic screen interface. A suitable display screen may be included in the elastic screen interface. For example, stacked, planar arrays of piezoelectric elements may be used to provide variable actuation, sensing, or both. In some arrangements, each array may include, for example, piezoelectric elements of a particular size, providing multi-scale control in actuation and sensing.

Stacked arrays may be used to create a contoured screen surface such as, for example, contour maps, shaped buttons, moving contours or shapes, or other surfaces with multi-scale features.

Apple's patent FIG. 9 below illustrates a smartphone which includes a touch display 902 with integrated haptic systems, soft commands 908 and contoured screen feature 950. The smartphone may use one or more piezoelectric elements to form a raised button on the display, as seen in patent point # 908. 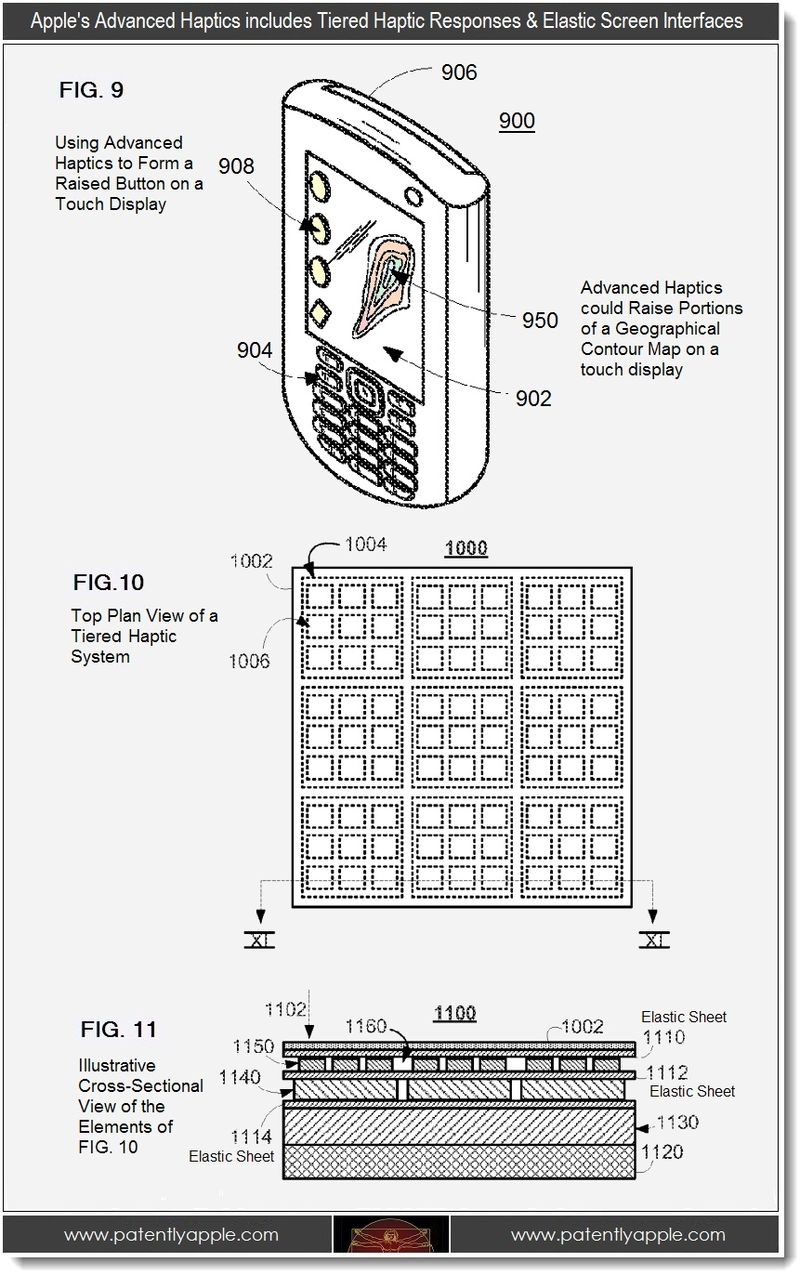 Further to FIG. 9, we see that contoured surfaces may be formed on the display using one or more shape change elements. For example, the contoured screen feature 950 may be a geographical contour map, in which portions of the display are raised in accordance with corresponding elevation data. In some embodiments, any suitable contour, deformation, topology, or other suitable surface feature, or combination of features, may be formed on the display such as, for example, raised buttons, raised arrows, depressions, patterns, or moving features (e.g., cursors). In some embodiments, tactile stimuli to display 902 may be detected by user device 900. For example, user device 900 may detect that a user has touched a particular surface feature on display 902, and may execute a particular task associated with the surface feature.

Apple's patent FIG. 10 shows an illustrative top plan view of tiered haptic system 1000. Shown in FIG. 11 is illustrative cross-sectional view 1100 of the elements of FIG. 10. The tiered haptic system may include display screen 1002, elastic sheets 1110, 1112 and 1114, substrate 1120, shape change element arrays 1130, 1140 and 1150, any other suitable components or any suitable combinations thereof. The elastic screen sheet may provide a visual, tactile, or both, interface with which a user may interact.

Apple further notes that the elastic sheets may include thin sheets of any suitable materials such as, for example, elastomers (e.g., rubber, thermoplastics), polyurethane, polypropylene, polyethylene, polystyrene, polyester, any other suitable elastic material, or any suitable combinations thereof.

The mention of Lexan is very interesting considering that Apple's invention notes that their tiered haptic system could be applied to a head-mounted Display or Video Glasses. Additonally, the new haptics system could also apply to traditional devices such as a MacBook, an iPad, an iPhone, an iPod touch, a computer monitor or other devices like a television and video projector. 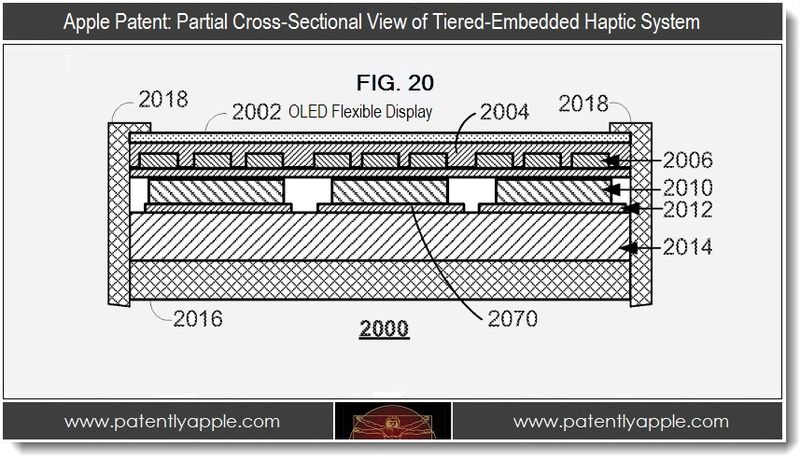 Additionally, Apple states that the display screen may display any combination of graphics, images, video, tables (e.g., iTunes listings), text, contacts (e.g., phone list), any other type of visual information or graphics, or any suitable combination thereof. Interestingly Apple states that the display could also be monochrome (e.g., black and white), color or grayscale and could be segmented or partitioned such that the display screen includes one or more smaller screens, which may allow for further screen contouring. The inclusion of monochrome displays is interesting in that it could translate to an e-ink type of display and or hybrid display which Apple has is working on. But when Apple adds "further screen contouring," it very much reminds me of a recent Microsoft patent that presents a possible future smartphone that has a contoured e-ink back display.

In some embodiments, haptic systems may map graphics onto contoured screen features. For example, a particular graphic (e.g., video clip) may be displayed on the display screen of a particular user device. The display screen may then undergo deformation (e.g., contouring) and use image processing techniques to alter the displayed graphic in response to the screen contouring. Hmm, I wonder if this could apply to video games to give controls a textural feel and depth.

In another example, a contour elevation map with text annotations may be displayed on a display screen of a user device. A user device may contour the display screen, by activating one or more shape change elements, to correspond to the elevation at a particular region on the contour map. The user device may alter the display to compensate for the contoured surface by stretching, compressing, moving, rotating, warping, curving or otherwise altering the displayed graphic (e.g., contour map with text annotations).

In some embodiments, regenerative power management may prolong battery life by recovering energy supplied by a user or other tactile stimulus. 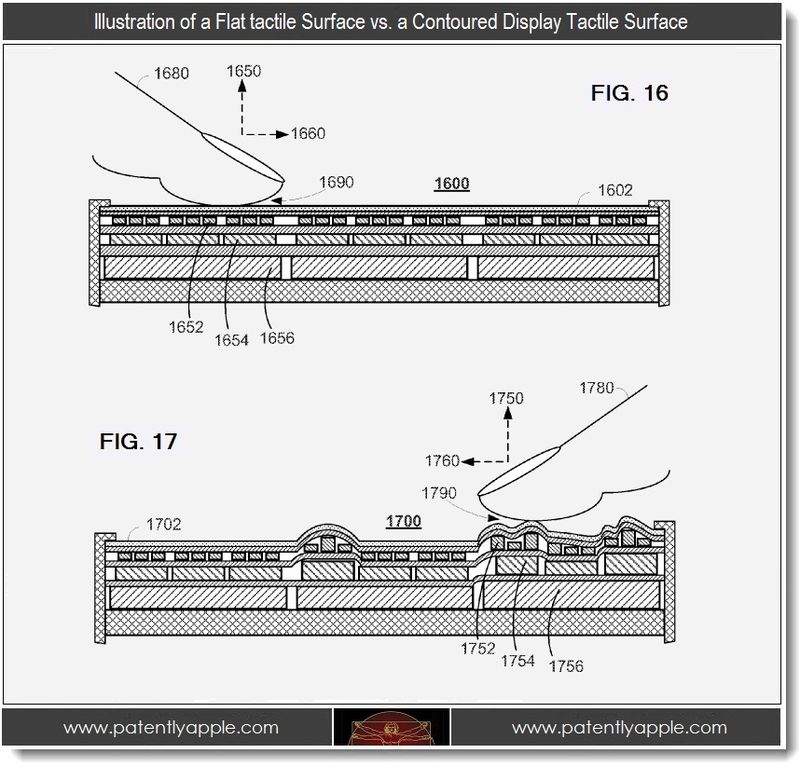 Apple's patent application was originally filed in Q4 2010 and only made public today by the US Patent and Trademark Office. Update June 26, 2012: Check out the note below to Russell Maschmeyer, one of the inventors of this patent. The other inventor of this patent is noted as Gordon Cameron.

As a general note about patent figure 9 presenting hard keys. Keep in mind that Apple talks about the invention relating to a video projector, TV and other devices. So the inclusion of hard keys is simply acknowledging that the invention will relate to many devices of which some may contain hard key buttons. Patent Figures are "conceptual drawings" and aren't presented as a design patent which will be filed at a later date.

Update May 4, 2012: The video below covers the basics of Haptics that may be of interest to some.

Why? Because Russell Maschmeyer is one of the inventors of this patent and he's getting married to Jessica. Here's their story.

The obvious implication of this technology is to allow a hover state in interaction design on touchscreens: a light touch would bring up the button (the hover state), and pressing the button would activate the control.

The contoured display appears, to my eye, to be optimal for a keyboard layout: note that there are 3 tiers of "buttons", each with a different texture and feel.