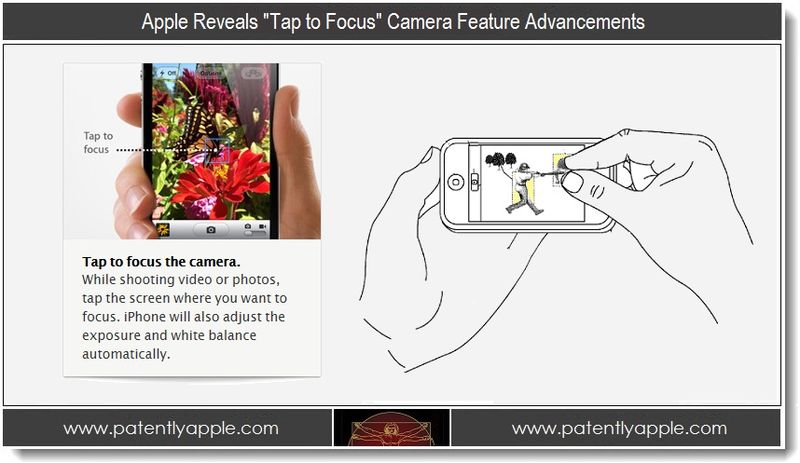 On Thursday, US Patent & Trademark Office published a patent application from Apple that revealed that future iDevices may in fact sport an advanced version of their current iOS feature known as "Tap to Focus." According to the patent application, Apple could add an additional dedicated processor to their architecture supporting the newly advanced multi-point gesturing. The feature will add other new functionality such expanding a given area of a photo for added emphasis. For the camera buffs amongst us, I think this may be a very cool feature in a future iPhone model.

Apple's invention is all about advancing their current camera feature known as "Tap to Focus." The formal title of Apple's patent application is "Multi-Point Touch Focus.' 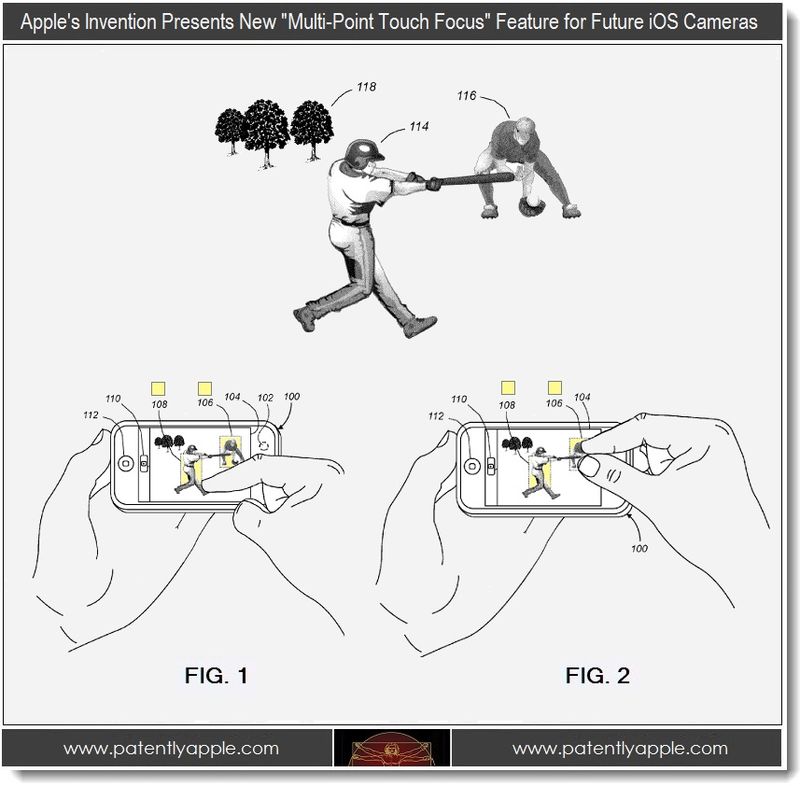 Apple's patent FIG. 1 is a pictorial view showing a user taking a photo with their iPhone while using the future iOS feature "tap, tap and hold," gesture. In FIG. 1, the user is able to perform a selection of multiple regions of interest on the touch sensitive screen 104 as shown by, for example, tapping the screen with a stylus or finger or by gestures such as touch and drag. The user is able to freely position the selections of regions of interest on a preview portion of the touch screen without being limited to predefined areas.

In some embodiments, the user may tap each region of interest 106, 108 to select a predefined area centered on the point of the tap (see yellow areas that we noted on the patent figure for your viewing convenience). Tapping a region of interest may remove the selection.

In other embodiments, a gesture such as tap and drag or pinch and depinch (spreading two pinched fingers) may be used to select both the location and size of a region of interest. Some embodiments may recognize both tapping to select predefined areas and gestures to select variably sized areas.

A user could manipulate one or more graphical objects 106, 108 in the GUI 104 using various single or multi-finger gestures. As used herein, a gesture is a motion of the object/appendage making contact with the touch screen display surface. One or more fingers could be used to perform two-dimensional or three-dimensional operations on one or more graphical objects presented in GUI 104, including but not limited to magnifying, zooming, expanding, minimizing, resizing, rotating, sliding, opening, closing, focusing, flipping, reordering, activating, deactivating and any other operation that could be performed on a graphical object.

In Apple's patent FIG. 2 we see the user applying a multi-finger gesture during an image capture process. The user positions this multi-touch gesture, namely the two contact points, at a location on the image of the scene that corresponds to an object in the scene (or portion of the scene) to which priority should be given when the digital camera adjusts the image capture parameters in preparation for taking a picture of the scene. In this example, the user has selected the location 106 where the fielder 116 appears on the screen.

In response to detecting the multi-touch finger gesture, the device may cause a contour 106, in this example, the outline of a box, to be displayed on the screen 104, around the location of the detected multi-finger gesture. The user could then contract or expand the size of the metering area, by making a pinching movement or a spreading movement, respectively, with the thumb and index fingers. Gesture movements may include single or multi-point gestures (e.g., circle, diagonal line, rectangle, reverse pinch, polygon). 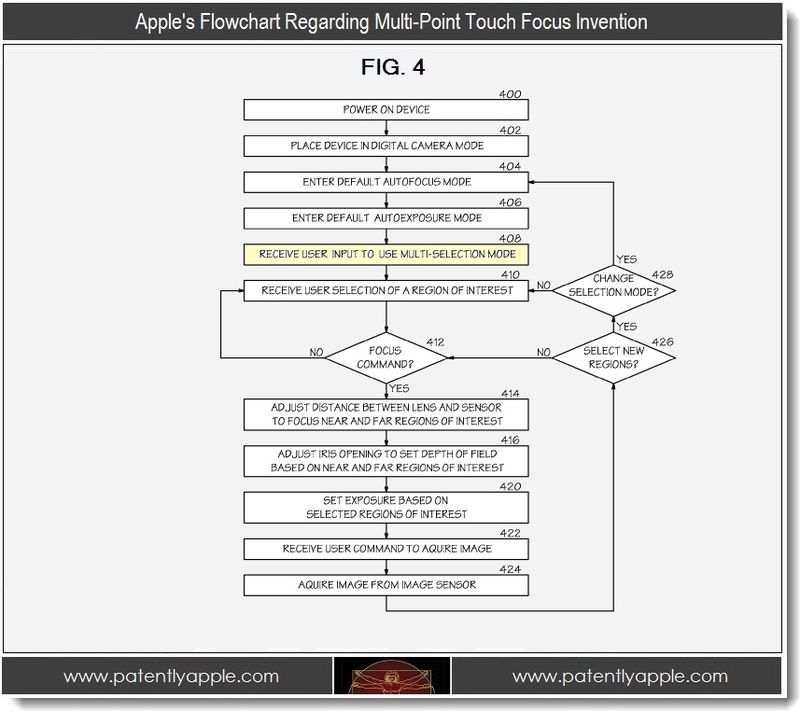 Apple's patent application was originally filed in Q4 2010 by inventor Richard Tsai who was recently credited for another Apple patent that we covered in April of this year regarding Flash Control for Electronic Rolling Shutter.

If should also be noted that this is a patent application and not a granted patent as other sites are incorrectly claiming.

Note to Referring Sites: We ask that referring sites limit the use of our graphics to a maximum of one regarding this report. Thank you for your cooperation.