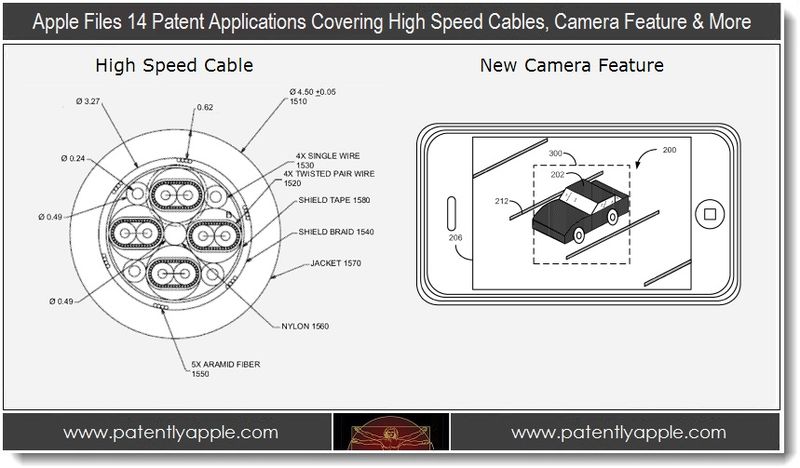 On May 03, 2012, the US Patent & Trademark Office published 14 patent applications from Apple. We first reported on a wild new haptics system from Apple this morning and in our final patent report of the day we briefly cover most of the remaining applications. Our report covers a lot of ground including a new battery design, a new camera feature and tweaks to both the Mac Mini and high speed cable connectors. Could the tweaks to the high speed connectors have anything to do with the rumored round dock connector slated for the next iPhone? Only time will tell.

The amount of data transferred between electronic devices has grown tremendously the last several years. Large amounts of audio, streaming video, text, and other types of data content are now regularly transferred among desktop and portable computers, media devices, handheld media devices, displays, storage devices, and other types of electronic devices. Since it is often desirable to transfer this data rapidly, the data rates of these data transfers have substantially increased.

Transferring data at these rates has proven to require a new type of cable. Conventional cables are proving to have insufficient capabilities to handle signals at these higher data rates. New cables having improved capabilities are thus needed.

For example, conventional cables tend to have higher parasitic components, such as series resistance, than may be desirable. These parasitic components degrade signal levels and, along with other factors (such as reflections and parasitic capacitances), lead to higher insertion losses. These higher insertion losses may lead to reduced signal amplitude and corrupted signal edges, making accurate data reception more difficult.

Also, since these cables are intended for external use (as opposed to being encased in a housing), they are often twisted and bent in various ways. These twists and bends may damage conventional cables.

Apple states that what is needed are circuits, methods, and apparatus that provide cables capable of high-speed data transmission. It may be desirable that these cables have low insertion loss and are manufactured such that they have well-matched signal pairs. It may also be desirable that they be flexible so that they may be bent and twisted without damage.

Apple's invention relates to cables capable of high-speed data transmission. A specific embodiment of the present invention may provide a cable having conductors that have a low insertion loss. These cables may also be manufactured such that differential signals may be conveyed with minimal skew. The conductors may also be arranged in a manner that allows the cables to be bent and twisted with a reduced amount of damage.

Specifically, an exemplary embodiment of the present invention may provide conductors that have a low insertion loss. These conductors may be formed from a number of strands or wires woven together. Each of these strands may be covered in enamel or other material to provide a physical separation in order to avoid an increase in resistance that may result due to skin effects. These strands may be woven in a manner that avoids electromagnetic dead zones that may occur with interior conductors. For example, the conductors may be woven in a manner consistent with a Litz wire. 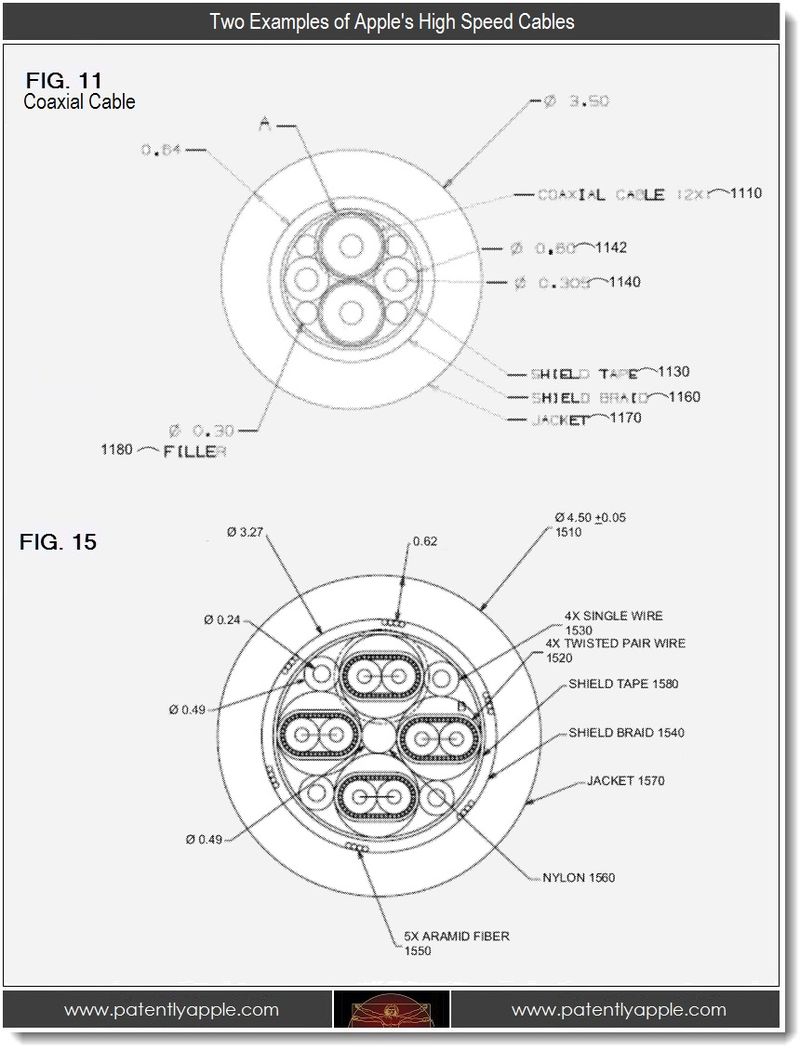 Apple's patent FIG. 11 illustrates a high-speed cable according to an embodiment of the present invention. This figure includes two coaxial cables 1110 as well as two other conductors 1140. Coaxial cables 1110 may be used to convey single-ended or differential signals

Apple's patent FIG. 15 is a cross-section of a high-speed cable that may include four twisted pairs 1520 and four single wires 1530. Twisted pairs 1520 may be used to carry differential signals, multiple single ended signals, power, ground, bias, control, status, or other types of signal, power, status, or control lines.

Apple's patent application 20120103651 was originally filed in February 2011 by inventor Min Kim. Apple claims the benefit of U.S. provisional patent application No. 61/408,052, filed Oct. 29, 2010. Today's patent indicates that they've tweaked their claims to include mention of coaxial and twinaxial in addition to adding the use of enamel and silver to the invention and to its claims. Many of today's patent figures relate to Thunderbolt as they share commonalities with another patent which we covered in January titled "Apple Patents Reveal Thunderbolt is headed for iOS Devices."

A Related Patent that was published today is titled "Spark Gap for High Speed Cable Connectors." Patent 20120106018 relates to cables that use of a plurality of spark gaps that may be used for electrostatic discharge protection. 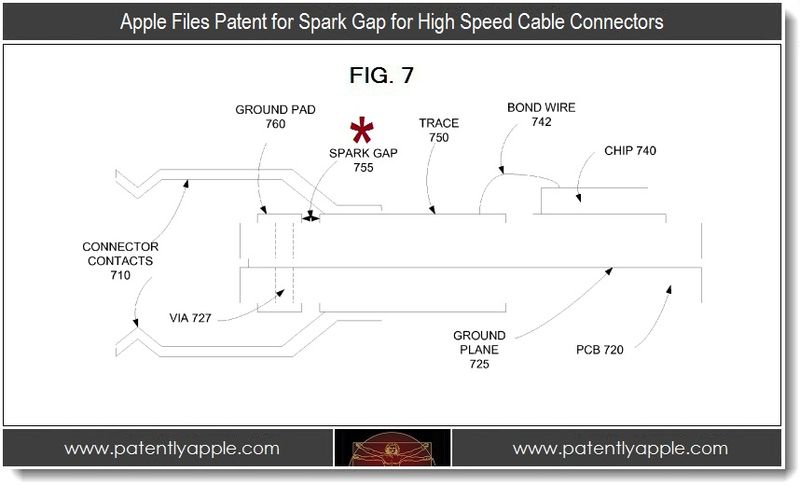 Once again, Apple claims the benefit of U.S. provisional application No. 61/408,042, filed on Oct. 29, 2010. The initial filing is to assure the earliest possible date for protection of the idea.

In December 2011 we posted a report titled "Apple Reveals the Mac Mini from Design to Removable Hard Drive." Today's patent application is pretty much the same except they've updated their claims and made a few tweaks. When you compare the December 2011 patent with today's patent application we see that there are more claims. One of the key new claims state the following:

In some situations, blowouts may occur as a result of an intentional artistic choice of the photographer, or they may be an accurate depiction of areas of extreme brightness in the scene, such as the reflection of the Sun off the surface of a body of water. In these cases, the loss of detail in the blown out areas may be intentional, tolerable, or even appropriate for the situation. However, in other situations, the blowouts are instead caused by an auto exposure algorithm "believing" that it is making the correct adjustments to the camera's exposure parameters (e.g., shutter speed, aperture, ISO, gain, etc.) in order to capture the scene in a desired way, when, in reality, the choices made by the auto exposure algorithm turn out to be suboptimal for the scene's composition. Under certain circumstances, it is an inescapable consequence of auto exposure algorithms that some scenes will end up being exposed in a suboptimal way. In other words, auto exposure algorithms cannot, in general, completely mimic the exposure choices that the trained eye of a seasoned photographer is capable of making. It is in these cases where it would be advantageous to have a "blowout prevention" stage in the image processing pipeline in conjunction with the running of any auto exposure algorithm that would be capable of correcting the camera's exposure settings in an effort to reduce unwanted or unintentional exposure blowouts. 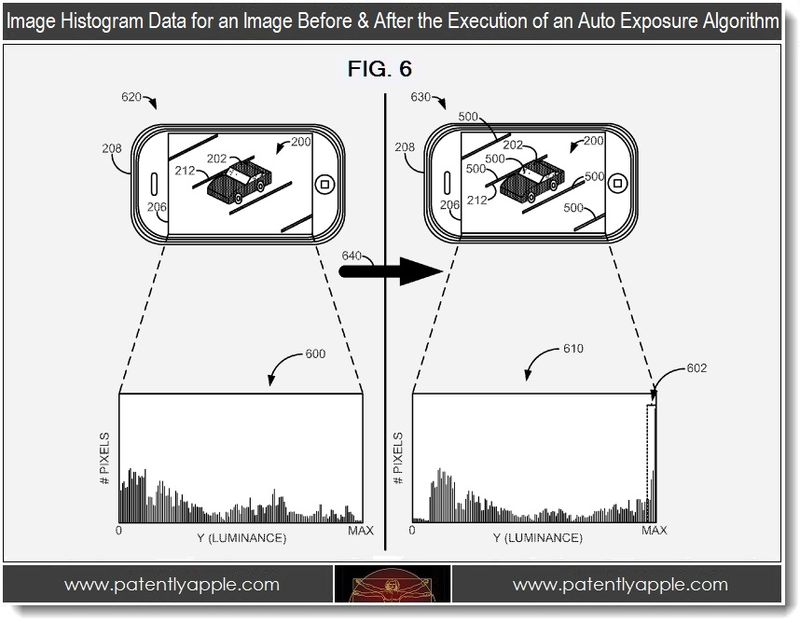 Apple's patent FIG. 6 illustrates image histogram data for an image before and after the execution of an Auto Exposure algorithm 640 on the captured digital image is shown. For more on this invention, see patent 20120105672.

Rechargeable Battery with a Jelly Roll Having Multiple Thicknesses 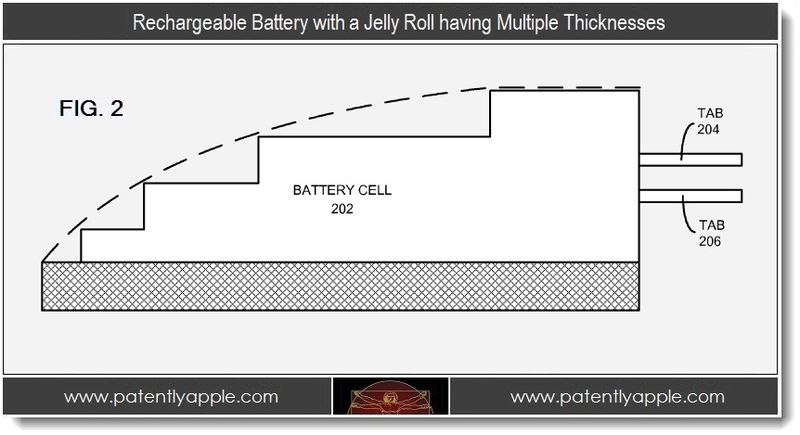 In January of this year we posted the patent application from Apple regarding future shapes of batteries under our report titled "Apple to Redesign Battery Shapes for Future, Thinner Devices."

Today's patent application relates to the design of a battery cell with multiple thicknesses. This battery cell includes a jelly roll enclosed in a pouch, wherein the jelly roll includes layers which are wound together, including a cathode with an active coating, a separator, and an anode with an active coating. The jelly roll also includes a first conductive tab coupled to the cathode and a second conductive tab coupled to the anode. The jelly roll is enclosed in a flexible pouch, and the first and second conductive tabs are extended through seals in the pouch to provide terminals for the battery cell. Furthermore, the battery cell has two or more thicknesses, wherein the different thicknesses are created by removing material from one or more of the layers before winding the layers together. For more on this invention, see patent 20120107654.

I look forward to the usual cruft around the web proclaiming once again Apple never innovate nor invents a thing.