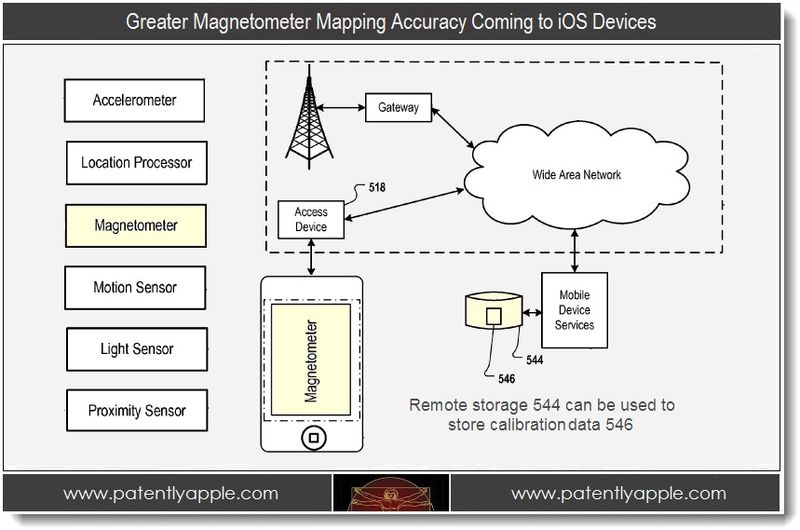 In 2009 we learned that Apple began researching new sophisticated in-vehicle navigation systems. Then in 2011 we further learned that they were working on ways to advance their "Maps + Compass" iOS application with augmented reality. And before 2011 closed out, Apple acquired C3 Technologies which is likely to bring photo-realistic mapping to iOS devices in the not-too-distant future. Adding to this momentum we learn today that Apple has invented an advanced magnetometer application and related system. It's designed specifically to provide iOS devices with greater mapping and navigation accuracy. And to be absolutely clear about their market focus, Apple specifically lists navigation systems for vehicles, aircraft and watercraft.

The Problem with Today's Magnetometers

Modern mobile devices may include a variety of applications that depend on an accurate estimate of device location, such as a map application or location-based services (LBS) application. An integrated Global Positioning System (GPS) receiver and onboard sensors (e.g., accelerometers, gyroscopes) can be used to determine location and orientation of the device, and even provide a rough estimate of heading.

Apple is about to change all of that with a new real-time calibration system and method for iOS devices that have an onboard magnetometer. The new system will use an estimator to estimate magnetometer calibration parameters and a magnetic field external to the mobile device (e.g., the earth magnetic field).

In some implementations, a differential statistics calculator can be used to determine differences between the calibrated magnetometer readings (i.e., raw magnetometer readings corrected by estimated calibration parameters) and the estimated external magnetic field projected into device coordinates. This enables possible detection as well as resolution of magnetic interference that can adversely affect heading calculations.

In some implementations, a compass heading calculator can use the estimated external magnetic field and a three-dimensional attitude estimate of the device to provide a responsive heading vector. A calibration level can be used with a World Magnetic Model (WMM) to determine compass heading accuracy.

In some implementations, the attitude of the mobile device may not be available or accurate enough to estimate magnetometer calibration parameters. In such situations, an attitude-independent estimator can use an algebraic linearization formulation of a canonical calibration equation to estimate the bias vector based on an assumption that calibrated magnetometer readings lie on the surface of a sphere.

Various implementations of the subject matter described here may provide one or more of the following advantages. In one or more implementations, the usage of the mobile device attitude information enables a more stable and more accurate estimation of magnetometer calibration parameters. More importantly, accurate calibration can be achieved with less user motion (e.g., less data required) resulting in a speed-up of the calibration process. Thus the magnetometer can be calibrated using motion data generated from a user's normal use of the mobile device without explicit user intervention.

Another advantage is provided by using the estimated external magnetic field (projected into the device coordinate frame) to provide smooth, responsive, calibrated magnetometer output that results in a more accurate and lag-free heading vector for navigation applications running on the mobile device. Without the estimated external magnetic field, calibrated magnetometer readings are obtained from raw (uncalibrated) readings corrected by the estimated calibration parameters. Since the raw readings are usually noisy, the resulting magnetometer heading vectors have to be smoothed by a low-pass filter which introduces noticeable lag.

The compass application can be a software program running on a mobile device having a magnetometer, including but not limited to: a smart phone, vehicle navigation system, e-mail device, game device, laptop computer, electronic tablet, media player or any other device that includes a magnetometer. The mobile device can include one or more onboard sensors for determining the attitude (e.g., a gyro sensor) and acceleration (e.g., an accelerometer) of the mobile device. 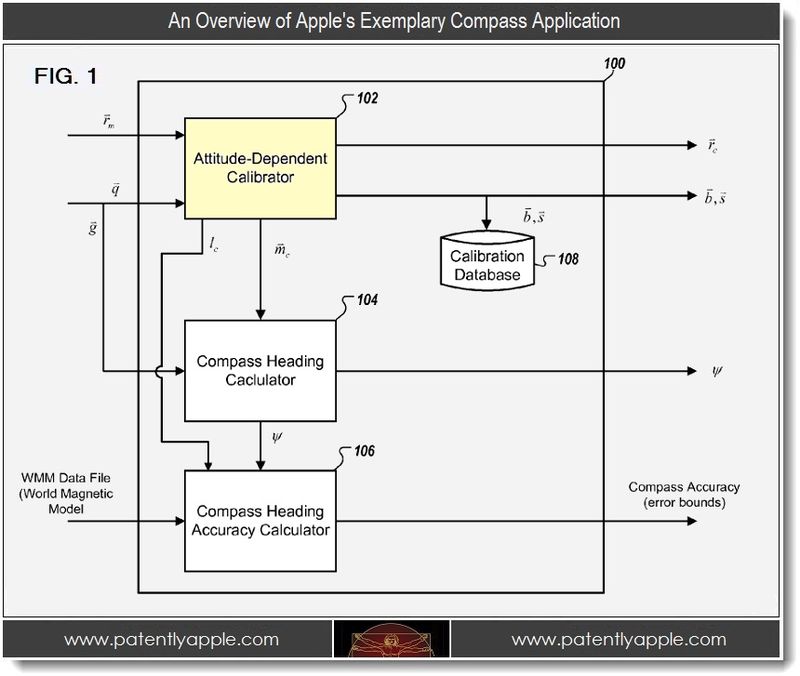 Beyond iOS Devices, the Advanced Magnetometer Could be used in Vehicles, Aircraft and Watercraft

In some implementations, raw or uncalibrated magnetometer readings are input to the attitude-dependent calibrator. The readings can be read from a magnetometer onboard the mobile device. A magnetometer is an instrument that can sense the strength and direction of the magnetic field in its vicinity. Magnetometers are useful for applications that require dead reckoning or headings, such as navigation applications for vehicles, aircraft and watercraft.

Apple's patent FIG. 2 presented below is a detailed overview of their exemplary attitude-dependent calculator of FIG. 1. 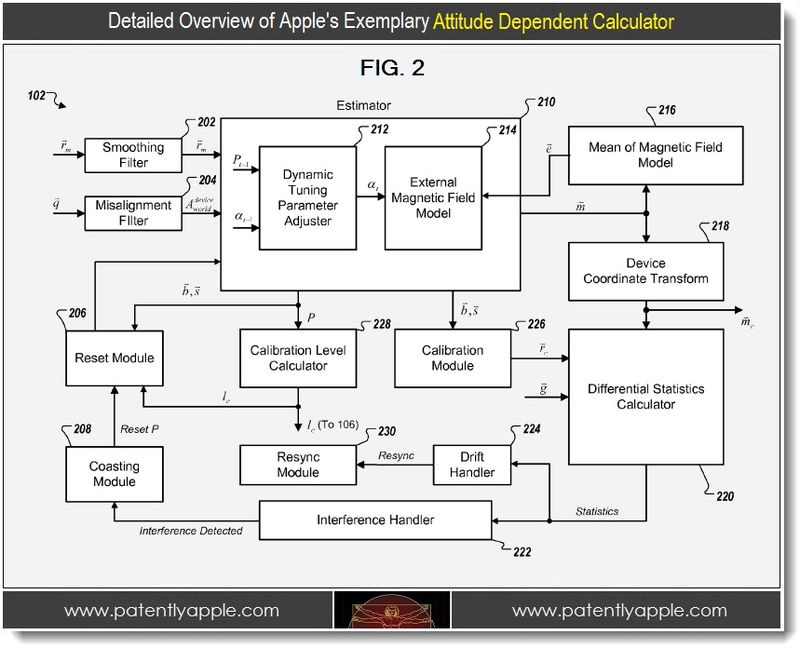 When Apple launched their 2012 iPad, one of the factoids that quickly emerged was that they had switched from Google Mapping services to that of OpenStreetMap for iPhoto. While Apple's recent pull-away from Google mapping services may have marked their first step in abandoning Google Maps altogether, the growing evidence is clearly indicating that it won't be their last.