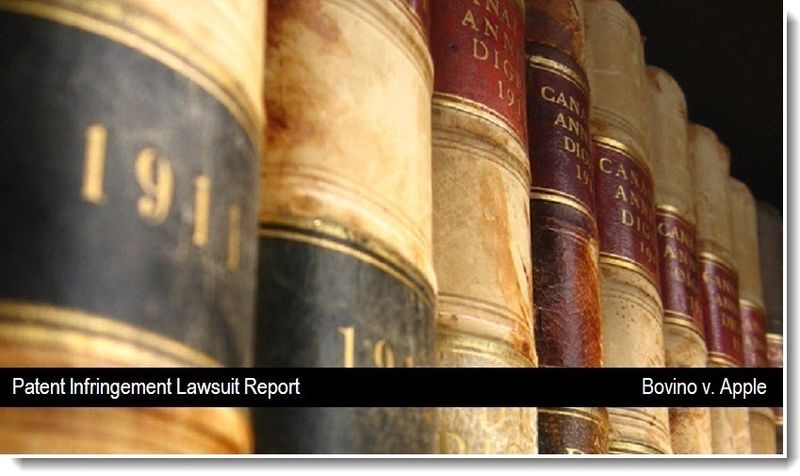 On the surface, this certainly looks like a classic David and Goliath case. Individual Jerald Bovino is taking on Apple claiming that the iPad Smart Cover infringes on his "portable computer case" patent. Bovino is seeking a royalty from Apple and/or $100,000. At the end of the day, once you actually see the design, you'll have to admit that Bovino has a lot of courage taking on the number one tech company in the world.

According to the court document, Bovino's complaint states that the "Defendant Apple has infringed and is continuing to directly infringe, contribute to the infringement of, and/or induce the infringement of, at least one claim of the '809 Patent without Plaintiff Bovino's consent or authorization. Such acts of infringement include, but are not limited to, Defendant Apple's use, sale, provision, and operation of the iPad Smart Cover for the new iPad and the iPad 2.

Although the official complaint mentions that Bovino wants a "reasonable royalty," the fact is that the actual "Civil Docket for Case # 1:12-cv-01105-RBJ" lists a clear demand for $100,000. The abstract for Bovino's patent 6,977,809 is presented below in our graphic. 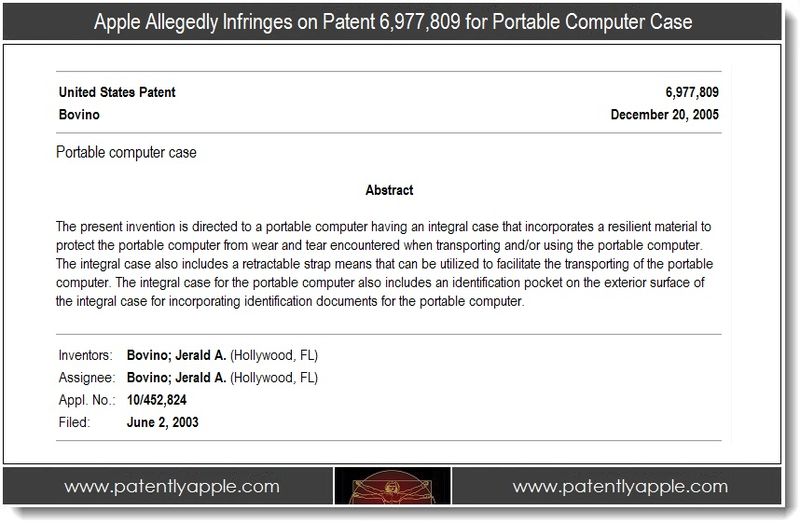 Images from the Bovino Patent 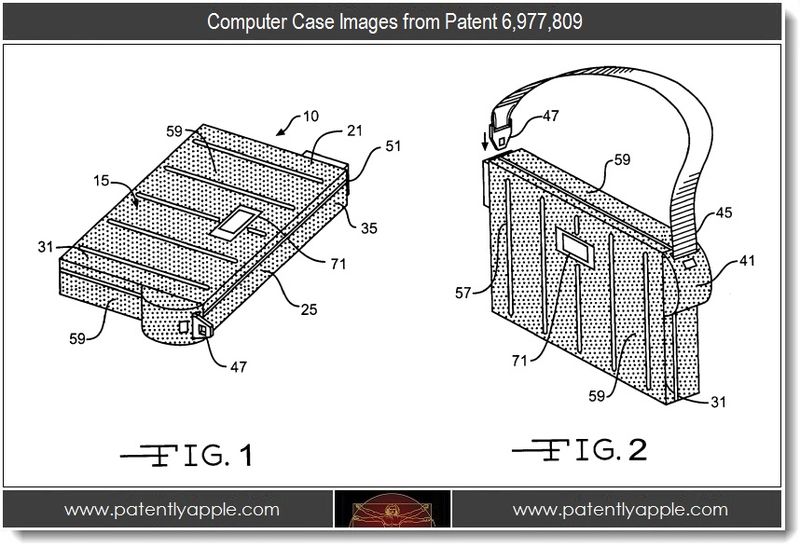 The first claim of the Bovino patent reads as follows: "A portable computer comprising: an openable case defining an exterior surface for holding the computer; and a plurality of resilient ribs positioned on said exterior surface of said case wherein said resilient ribs protects said computer from wear and tear during the transporting and use of the computer." The other claims don't appear to have any relevance against the iPad Smart Cover.

It should also be noted that the claim of "resilient ribs" as being relevant to the design is never explained in the patent as to what it entails. At the end of the day, it's very difficult to understand why Bovino thinks that there's a solid case against Apple with patent 6,977,809. Especially in light of Apple being granted a patent for the iPad Smart Cover on April 24, 2012 and a more substantive one in March of this year.

The case was filed in the United States District Court of Colorado. The presiding Judge in this case is noted as being Judge R. Brooke Jackson.

I updated the report with a secondary Granted Patent for the iPad Smart Cover. The iPad Cover is light years ahead of Bovino's and trying to stretch the bendable sections of the Smart Cover to even resemble Bovino's resilient ribs is so off the wall it's hard not to laugh. Bovino will have his day in court. But please, enough with the jokes. Ha!

While I appreciate your point of view and time you took to send in your comment, I respectfully dissagree with you.

Thanks for the comment. I added a more substantive patent to the report that was issued in March. See below:

Thanks for pointing that out, as the second patent is vastly superior and more in context. Apple's cover is so advanced that Bovino's case doesn't stand a prayer. Of course, it's one man's opinion and Bovino will have his day in court.

"At the end of the day, it's very difficult to understand why Bovino thinks that there's a solid case against Apple with patent 6,977,809. Especially in light of Apple being a granted a patent for the iPad Smart Cover on April 24, 2012."

Your comment that "it's very difficult to understand why Bovino thinks that there's a solid case against Apple with patent 6,977,809" is simply wrong as a matter of law. Apple's patent is not relevant in any way to whether or not the iPad cover infringed Bovino's patent.

As far as ribs, the iPad cover could be considered to be rather wide ribs separated by bend points.

When you are #1 you can expect a multitude of bloodsuckers! Thanks for the most comedic lawsuit article I have ever read. I sincerely wish Mr. Bovino all the best in his efforts.