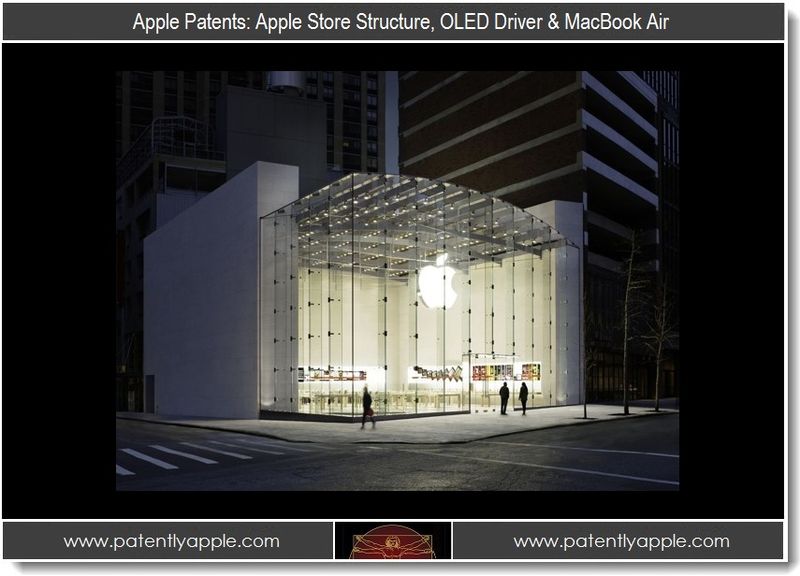 On April 26, 2012, the US Patent & Trademark Office published three interesting patent applications from Apple. In the first one, Apple seeks to patent their Upper West Side (NYC) retail store structure that's located at 67th Street and Broadway. Just last week they filed a similar patent application for their Shanghai Apple Store. This trend of patenting "Flagship" store designs is likely to be a trend that will continue going forward. In a second patent application, we see that Apple has developed a new OLED driver which indicates that Apple is considering OLED for future MacBook and iOS device displays. The advantage to OLED is that display-backlighting isn't required. In the third patent application we see that Apple is legally beefing up their patent pending MacBook Air by including nine related patent applications under one roof. Is Apple making this move to protect their design if challenged or could it be used offensively in the future against copycat OEM designs hiding under Wintel's Ultrabook banner? Time will tell. 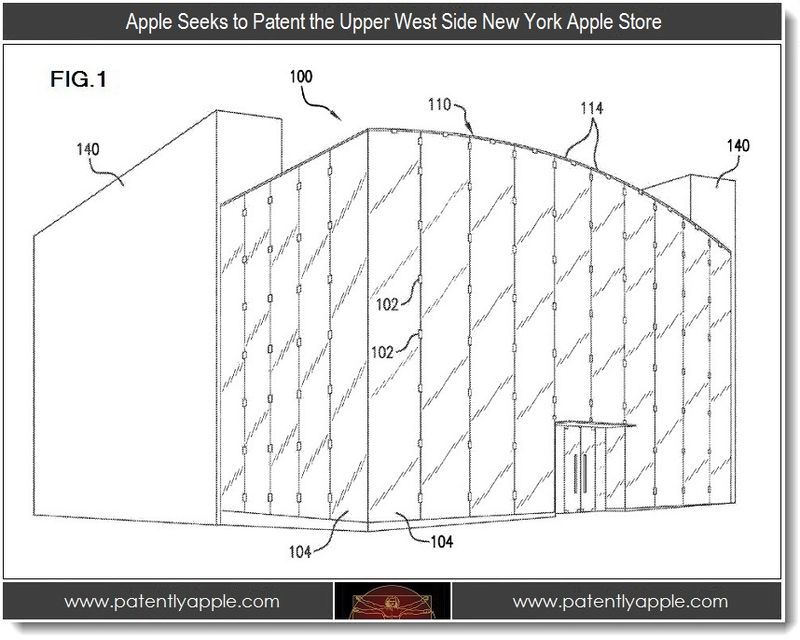 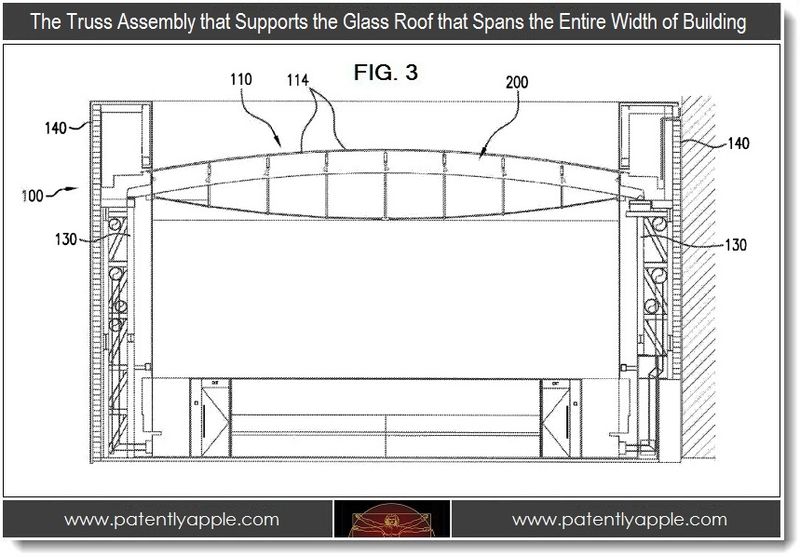 Apple's invention also provides a purlin, including a pair of purlin beams positioned apart from each other so as to define a space there-between, a cover plate extending between the purlin beams at a lower portion thereof, and utilities extending within the space, disposed above the cover plate.

In a second patent application from Apple regarding a new OLED driver technique, they begin with an introductory background overview of the subject matter.

Flat panel displays, such as liquid crystal displays (LCDs) organic light emitting diode (OLED) displays, are commonly used in a wide variety of electronic devices, including such electronic devices as televisions, computers, and hand-held devices (e.g., cellular telephones, audio and video players, gaming systems, and so forth). Such display panels typically provide a flat display in a relatively thin package that is suitable for use in a variety of electronic goods. In addition, such devices typically use less power than comparable display technologies, making them suitable for use in battery-powered devices or in other contexts where it is desirable to reduce power usage.

While increasing or decreasing the amount of power may increase or decrease the amount of light emitted by each OLED, the precise amount of light emitted by each OLED may vary according to a nonlinear function. As such, many techniques for adjusting the brightness of OLED screens have conventionally involved performing complex calculations on image data to ensure that when a brightness-adjusted image is displayed on the OLED display, each pixel displays a proper color and brightness. For example, a nonlinear transfer function may be applied to framebuffer-encoded image data and a dimming value divided from the image data. This dimmed image data then may be converted to an analog OLED pixel brightness control signal that is used by the OLED display to output light from OLED pixels. These conventional techniques may consume excessive system resources and/or may be incompatible with existing LCD brightness control mechanisms. 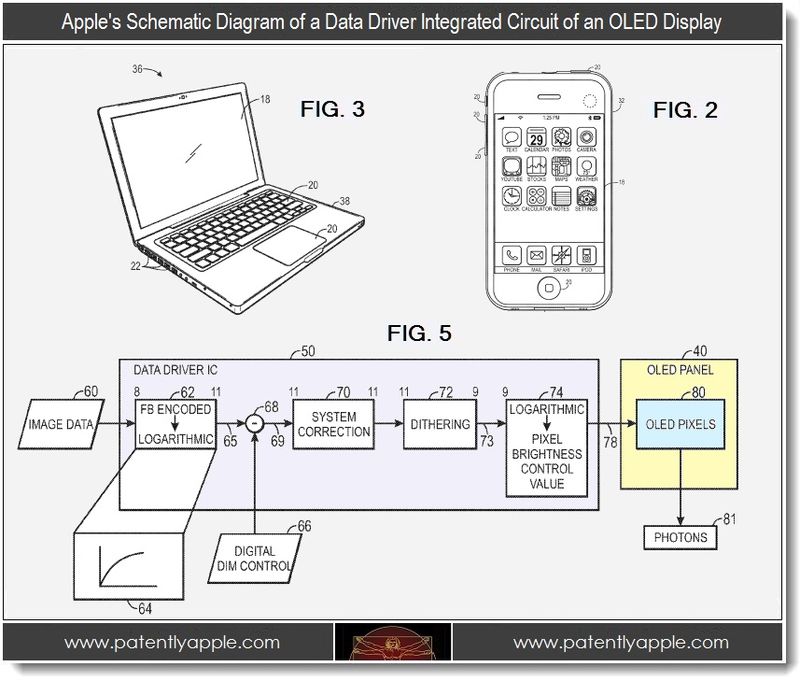 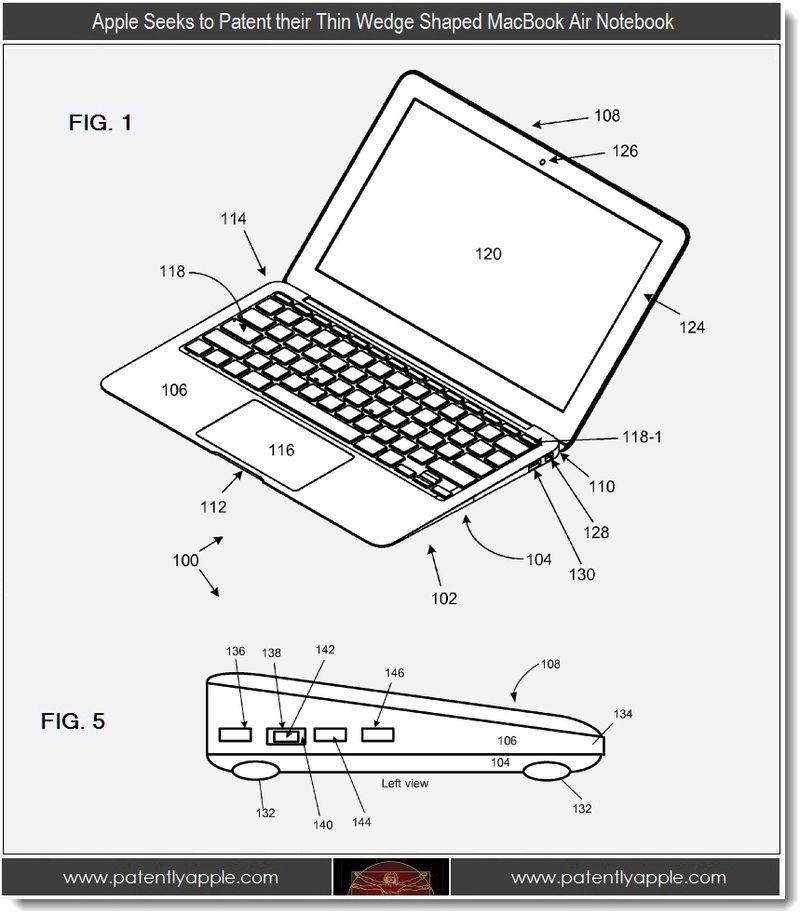 One design challenge associated with the manufacture of portable computing systems is the design of the outer enclosures used to house the various internal computing components. This design challenge generally arises from a number conflicting design goals that include the desirability of making the outer enclosure or housing lighter and thinner, of making the enclosure stronger, and of making the enclosure aesthetically pleasing, among other possible goals. Lighter housings or enclosures tend to be more flexible and therefore have a greater propensity to buckle and bow, while stronger and more rigid enclosures tend to be thicker and carry more weight. Unfortunately, increased weight may lead to user dissatisfaction with respect to reduced portability, while bowing may damage internal parts or lead to other failures. Further, few consumers desire to own or use a device that is perceived to be ugly or unsightly. Due to such considerations, portable computing system enclosure materials are typically selected to provide sufficient structural rigidity while also meeting weight constraints, with any aesthetic appeal being worked into materials that meet these initial criteria.

As such, outer enclosures or housings for portable computing systems are often made from aluminum, steel and other inexpensive yet sturdy metals having a suitable thickness to achieve both goals of low weight and high structural rigidity. The use of metal enclosures is also convenient from the standpoint of providing a ready electrical ground and/or a ready radio frequency ("RF") or electromagnetic interference ("EMI") shield for the processor and other electrical components of the computing device, since a metal enclosure or outer housing can readily be used for such functions.

Apple's invention describes various embodiments regarding systems and methods for providing a lightweight and durable portable computing device having a wedge shaped profile and an associated high speed memory card and card connector. This could be accomplished at least in part through the use of a wedge shaped outer housing and specially designed inner components arranged to fit and operate within this housing. Such components include a high speed memory card and associated card connector that utilizes contacts having short signal paths, as well as a ground plane split into multiple portions. In one aspect of the provided embodiments, the computing device takes the form of a laptop computer.

Apple Legally Beefs Up Protection for the MacBook Air

Today's patent application for the MacBook Air is really a continuation patent. Apple is now beefing up their patent pending MacBook Air by incorporating nine other patent applications to be under the roof of this one invention. If Apple wishes to challenge the Wintel Ultrabook, this would be one of the ways of strengthening their design for battle.