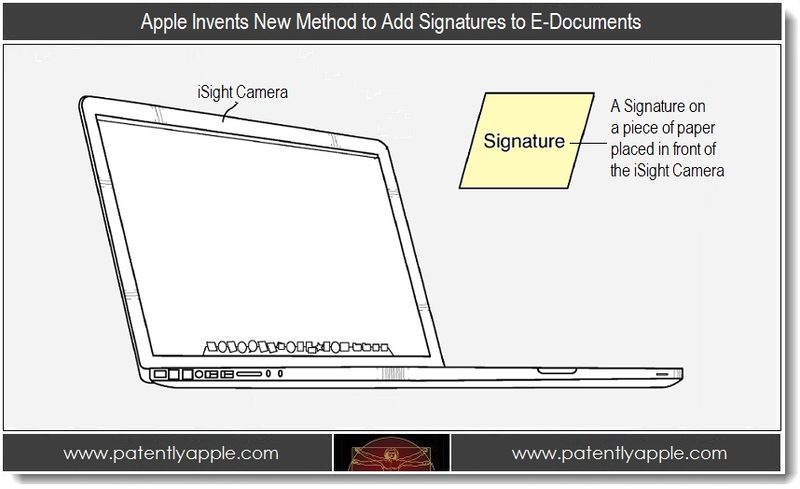 Apple definitely has their eye on the corporate world as a new patent application published by the US Patent and Trademark Office today reveals that they've invented a new and more convenient way to sign electronic documents. Many professions and governmental agencies have to deal with signing legal documents every day and Apple's new methodology may be the magic bullet in making this process convenient for electronic forms. Apple has also created several security measures that will appeal to both corporate and consumer markets alike. Whether Apple plans to keep this technical methodology for their new signature application alone or try to make it an industry standard is unknown at this time.

Some electronic devices could be used to enter data in documents displayed by the device. For example, a device could display a document provided by an electronic document file, such as a portable document format ("PDF") file document or a word processing file document that may include one or more text fields in which text could be entered. In particular, a user could select a particular field, and a provide text input information using an input interface of the device. Text corresponding to the text input information could be displayed in a text field of the document, and saved or printed as part of the document file.

Some documents, however, must be signed by a user. For example, government-issued or legal documents could require a signature before being filed. When such documents are created or filled-in on an electronic device, a user may not have a simple mechanism for including a signature in the document. Instead, a user may be forced to print a physical hardcopy of the document, sign the printed document, and transmit the signed physical document to a receiving party (e.g., by mail, facsimile, or by scanning the signed physical document and e-mailing the scanned document). This approach could be time consuming and burdensome for a user.

Apple's invention covers systems, methods, and computer-readable media for capturing a signature and placing a representation of the captured signature in a document. 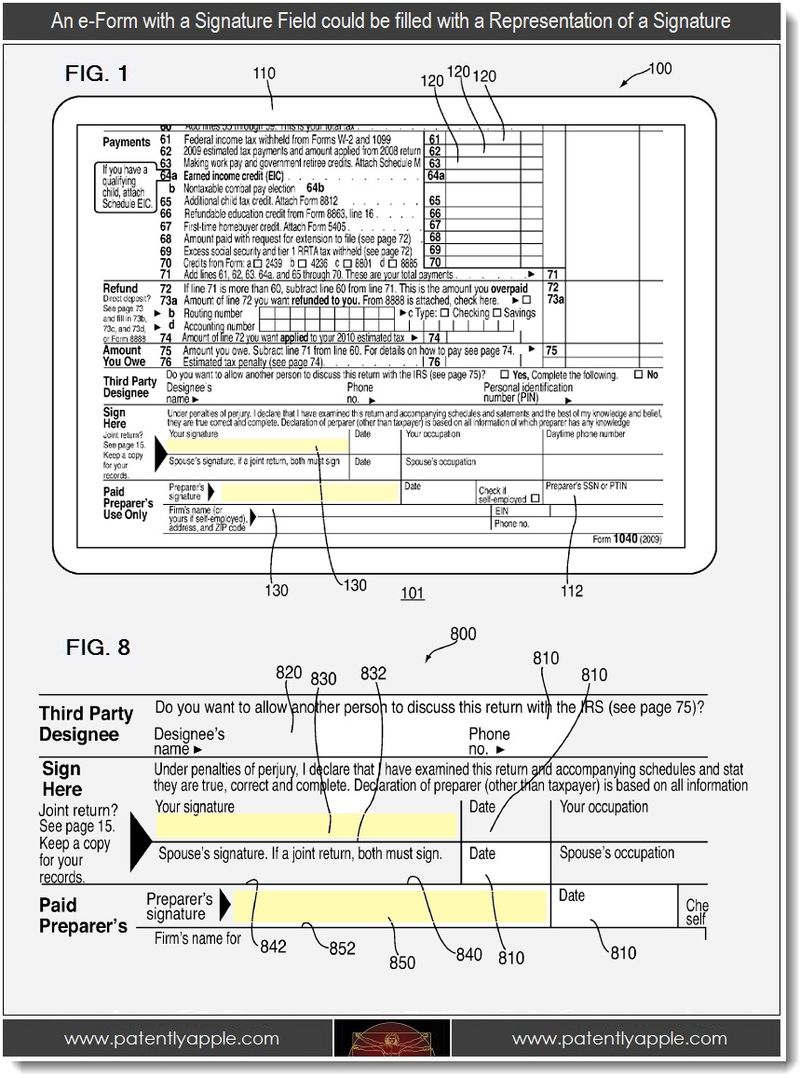 Because a signature can't be provided using key strokes from a MacBook or iMac keyboard, a user can write a signature on a piece of paper or other object of the user's environment, and place the signature in front of a camera for capturing an image of the signature. Apple's patent FIG. 2 illustrates this using a MacBook Pro. 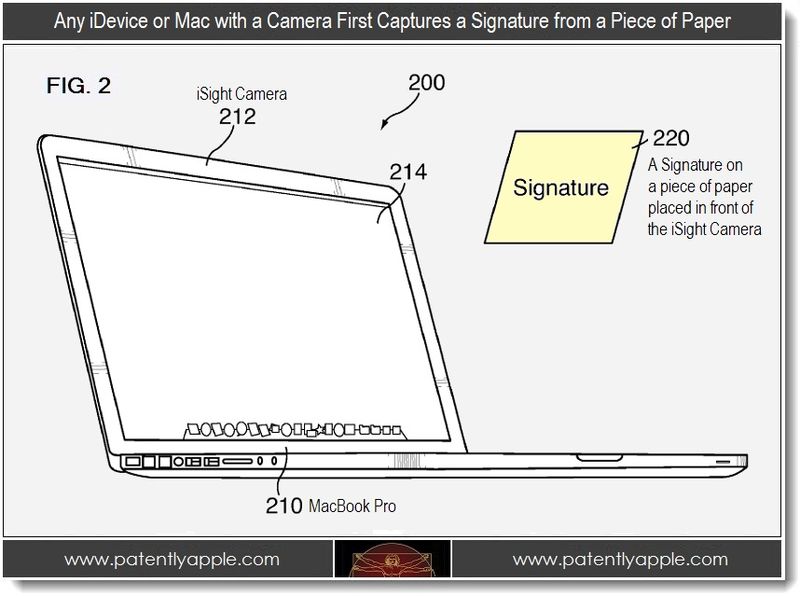 According to Apple, any idevice or Mac with a camera will be able to process the captured image to create a digital representation of the captured signature that may then be used in the electronic document.

The electronic device could identify light regions in a captured image, and define a boundary for the signature based on the light regions. The electronic device could then apply a raster-to-vector process to portions of the image within the boundary to create a vector representation of the signature. The raster-to-vector process could result in a representation of the signature that may include the outline of the user's signature strokes (e.g., pen or pencil strokes), any changes in line thickness of the strokes, velocity of the strokes, and other attributes of the signature.

A New App for Signatures

According to Apple, a suitable interface will be provided to assist a user in positioning a signature relative to a camera. For example, in Apple's patent FIG. 3 presented below we see a new app designed to capture an image of a signature. An appropriate Apple device will be able to call up this new signature based app that will include a window (#310) that may correspond to an image captured by a camera, and preview region (#320) that will provide a preview of a digital representation of a signature captured in the image of window. 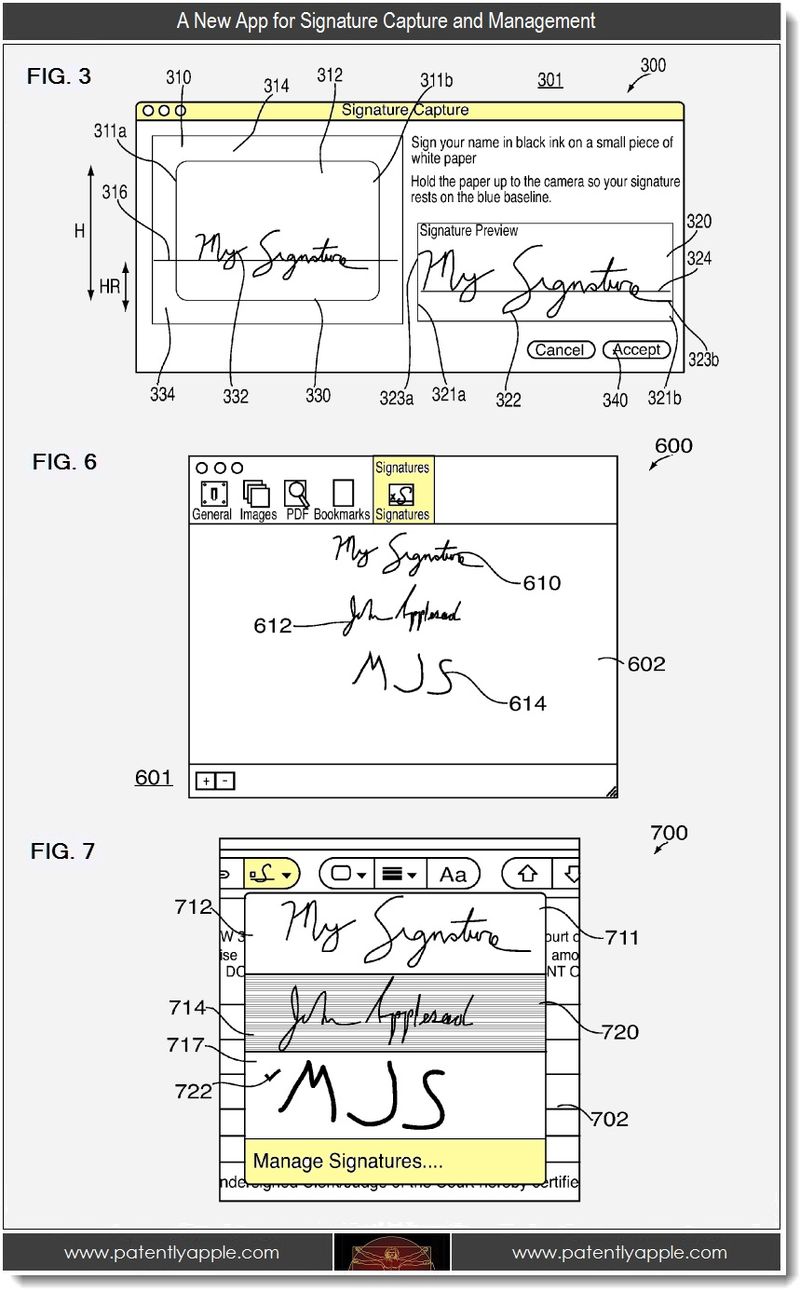 How the App Will Work 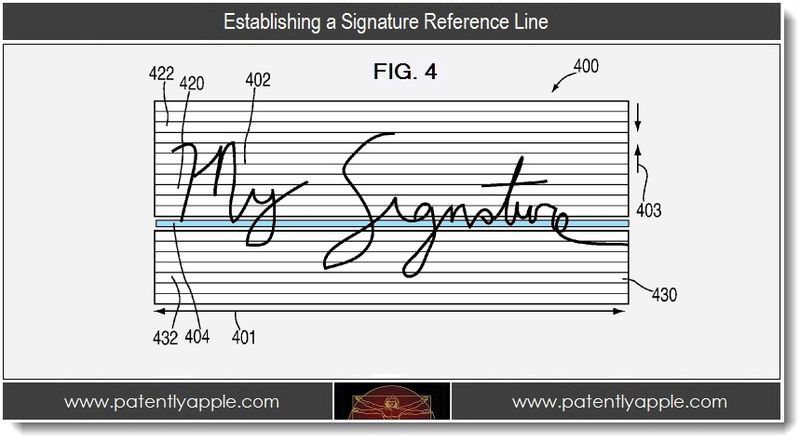 Apple's patent FIG. 4 is a schematic representation of an illustrative approach that may be used to identify a boundary box for a signature. Captured image 400 could include signature 402 that may be virtually positioned on reference line 404.

A representation of a signature could be stored using different approaches. In some cases, the signature representation may not be stored on disk and will be designed to vanish when the application used to create the signature (e.g., a PDF viewer or editor) quits. This could provide security to a user of the electronic device, as unauthorized users may not be able to retrieve the user's stored signature once the application has quit.

In some cases, representations of signatures could be associated with specific users or with specific accounts of an electronic device. In particular, in a device having several user accounts, a user could limit access to a representation of a signature to the user's account, for example to prevent a child from using his account to sign a permission slip using a representation of a parent's signature that is associated with the parent's account. Alternatively, a user could allow the signature to be used from other user accounts of the device.

While there's always a danger for official signature representations to be stolen by hackers – the benefits of creating sophisticated signature designs for electronic documents has its benefits as well. At the end of the day, it may be Apple's way of getting around having to use a stylus for creating signatures. On the fly, the next generation stylus may still hold an edge over Apple's solution. Yet if Apple makes the signature process convenient and includes built-in security as outlined, then they just might win corporate America over. The good news is that Apple has already released a version of this application in OS X Lion last year. Check out this report from Mac Life to see the features noted in our patent report. 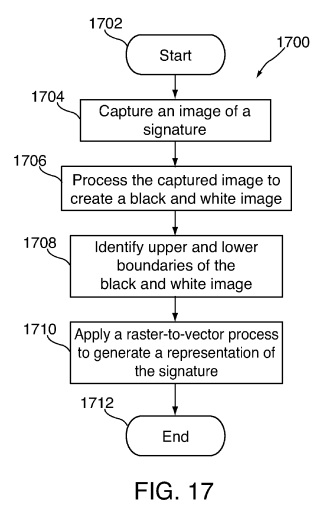