Part 2 - Apple's iWallet: The One that will Rule the World 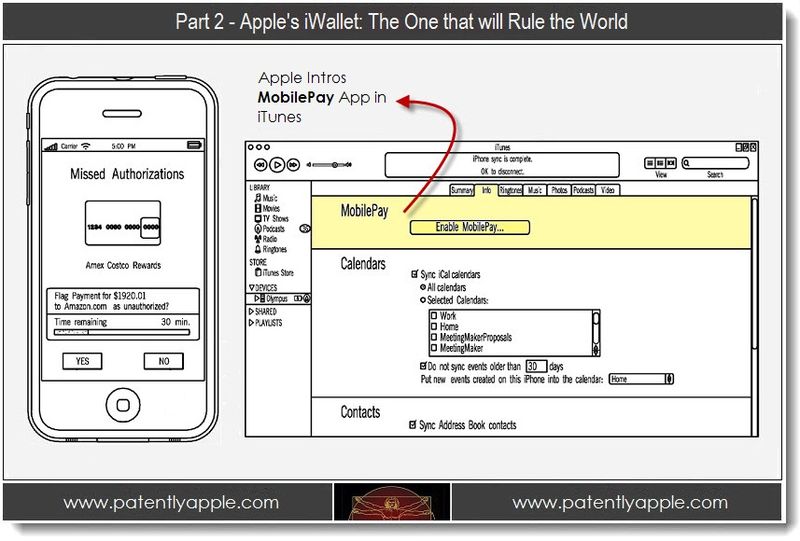 In early March Apple was granted a patent for a never before seen patent regarding Apple's forthcoming iWallet. The patent focused on parental controls for an iWallet and made a connection to a vague iTunes application and/or methodology. Today, another major component of Apple's iWallet was revealed in yet another granted patent. Today we learn about major security measures that the iWallet will employ and see more of the iTunes financial app that is temporarily being dubbed "MobilePay." The app takes on the appearance of a convenient tab found in iTunes, just like it is today for your apps, music or photos. Today's report fills you in on the latest features that Apple is thinking of bringing to the iWallet along with a great number of screenshots of various iWallet functions. If future electronic commerce with Apple's iWallet is a topic of interest to you, then you're going to enjoy this read.

Apple begins their background of their patent by stating that card purchases, such as via credit cards, debit cards, gift cards, and the like, may often be made in person or remotely. For example, an in-person transaction may involve handing a card to a store clerk or swiping a card through a point-of-sale system. In-person transactions may be facilitated by an identity verification process, such as, for example, showing the store clerk a picture identification, signing a receipt, and/or entering a personal identification number.

In contrast, remote transactions may occur without identity verification or physical fraud deterrents found in modern payment cards. For example, a consumer may purchase an item online or via the telephone without presenting a physical card to the vendor. These transactions may be known as cardholder-not-present, card-not-present, or customer-not-present transactions because the customer and card are not present at the point of sale. Cardholder-not-present transactions may be more susceptible to fraudulent abuse than traditional in-person transactions because the purchaser's identity is not verified. That is, the purchaser may be required to enter the card number and a security number located on the card; however, this information may be easily copied off of a card and used in a fraudulent manner. In addition, although a billing address may be requested and compared to the billing address associated with a card, goods may be shipped to addresses other than the billing address.

Accordingly, a card owner may not realize that a fraudulent cardholder-not-present transaction has occurred until a billing statement is received. It is generally preferable to detect the fraudulent activity as soon as possible so that additional use of the card may be prevented. It stands to reason, and widely publicized studies corroborate the fact, that losses can be more easily recouped when the fraud is timely discovered. While a consumer may be at least partially protected from liability when fraud has occurred, the issuing bank, acquiring bank, or merchant may bear the loss if goods have been sent to an unauthorized card user.

These costs are passed on to the consumer in the form of higher prices on goods and services, higher banking fees, and higher interest rates. In addition, even if the consumer is ultimately not held responsible for unauthorized charges, it may still be very time-consuming and frustrating to have the charges reversed. For many consumers, the theft of one's financial identity has a demoralizing psychological affect. Therefore, it may be desirable to reduce the possibility of fraud in cardholder-not-present transactions.

This functionality may be combined with parental controls, enabling parents to provide children with credit, debit, or prepaid cards, while allowing unauthorized or inappropriate charges to be identified and declined before goods are shipped or services rendered. Parental Controls was covered in our March 6, 2011 report.

A New Hand Gesture for Related to Payment Confirmation

This cardholder-not-present authorization functionality may also be combined with a distinctive gesture, such as a reverse swipe of a virtual control on a touchscreen and/or acceptance of a modal confirmation dialog, to reduce the possibility of a transaction being accidentally declined and/or to reasonably ensure that the end user understands and accepts that he or she is declining a fraudulent financial transaction or authorizing a legitimate transaction. The gesture is referred to as a Motion Based Payment Confirmation.

Apple's patent figures are noted below as follows: FIG. 2 is a front view of an iPhone that may incorporate Near Field Communication (NFC) technology as noted with the large "N" in the top left corner. The iPhone has an eWallet or iWallet application as noted by the icon on the iPhone's Home Screen; FIG. 3 is a front view of an iMac that includes NFC technology as shown at the bottom right corner. NFC or an equivalent will be required for the iWallet to function. 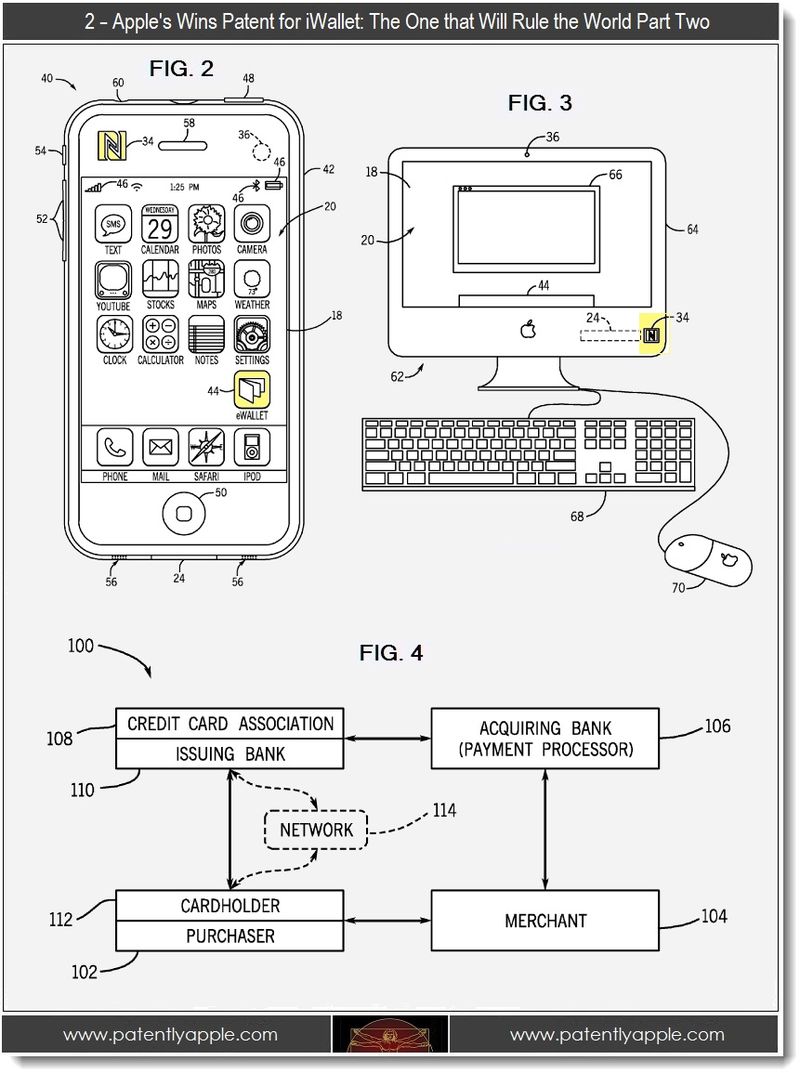 Patent FIG. 4 noted above is a schematic diagram of participants in a cardholder-not-present financial transaction.

Apple's Patent FIGS. 5-7 shown below are screenshots of an application for registering a card for cardholder-not-present authorization; an application that is identified as being "MobilePay." 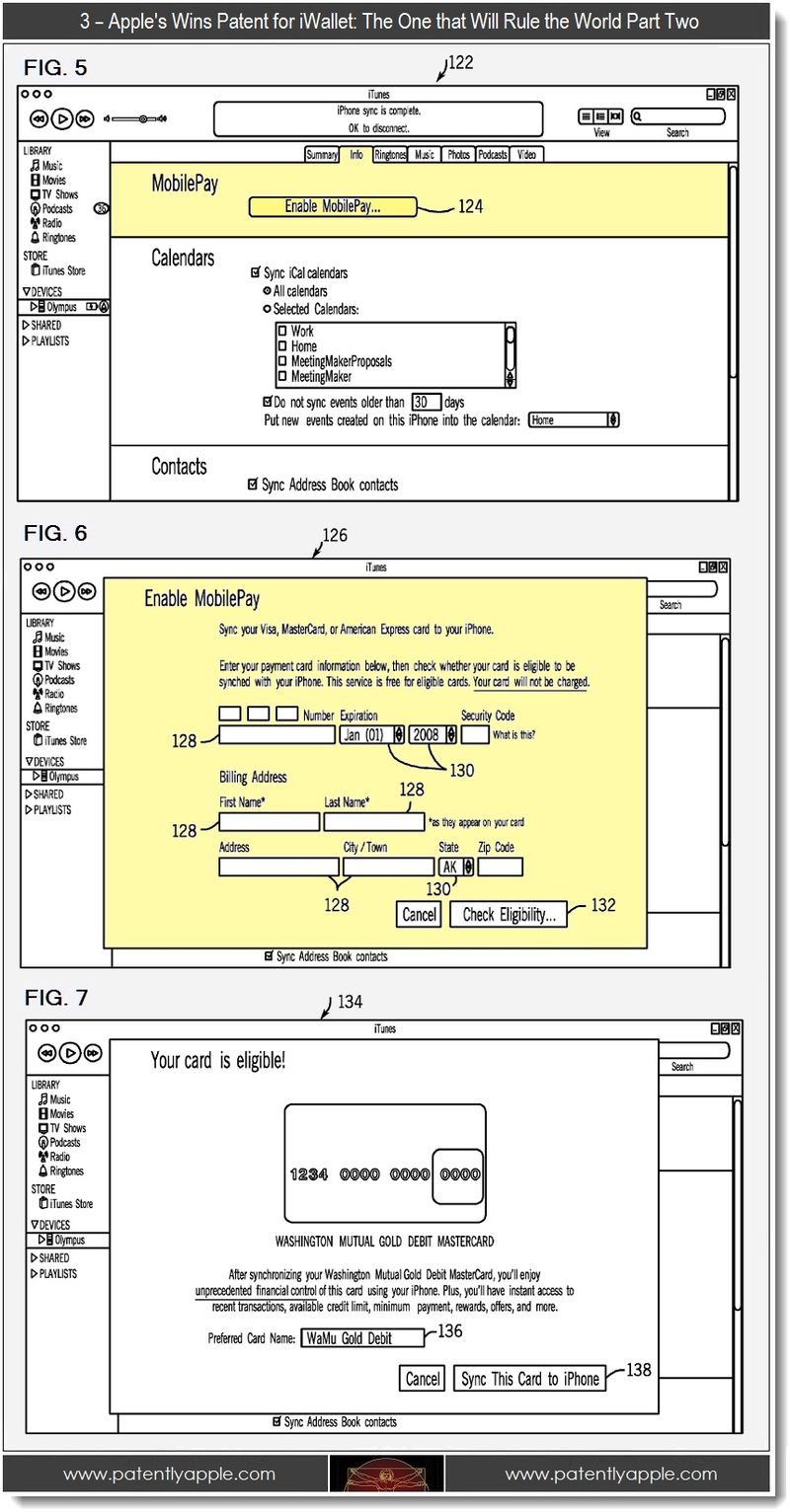 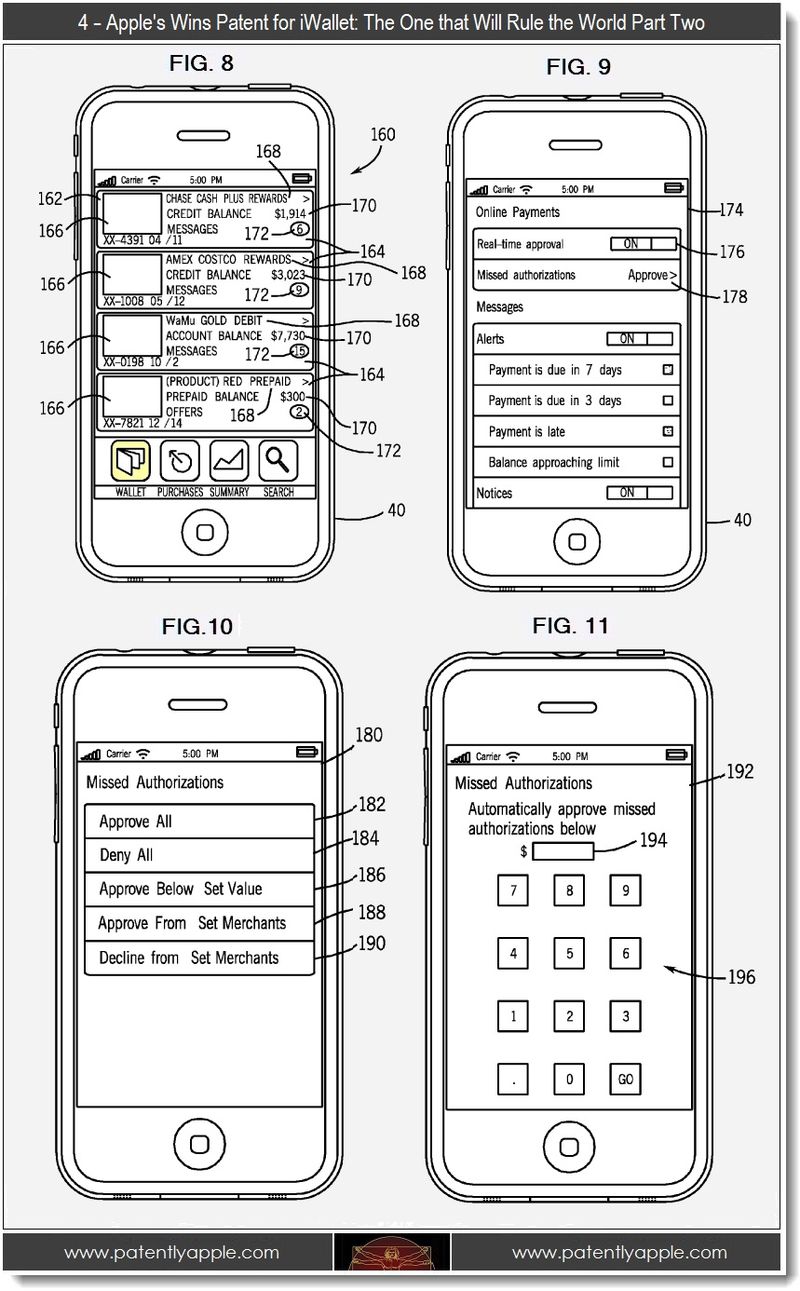 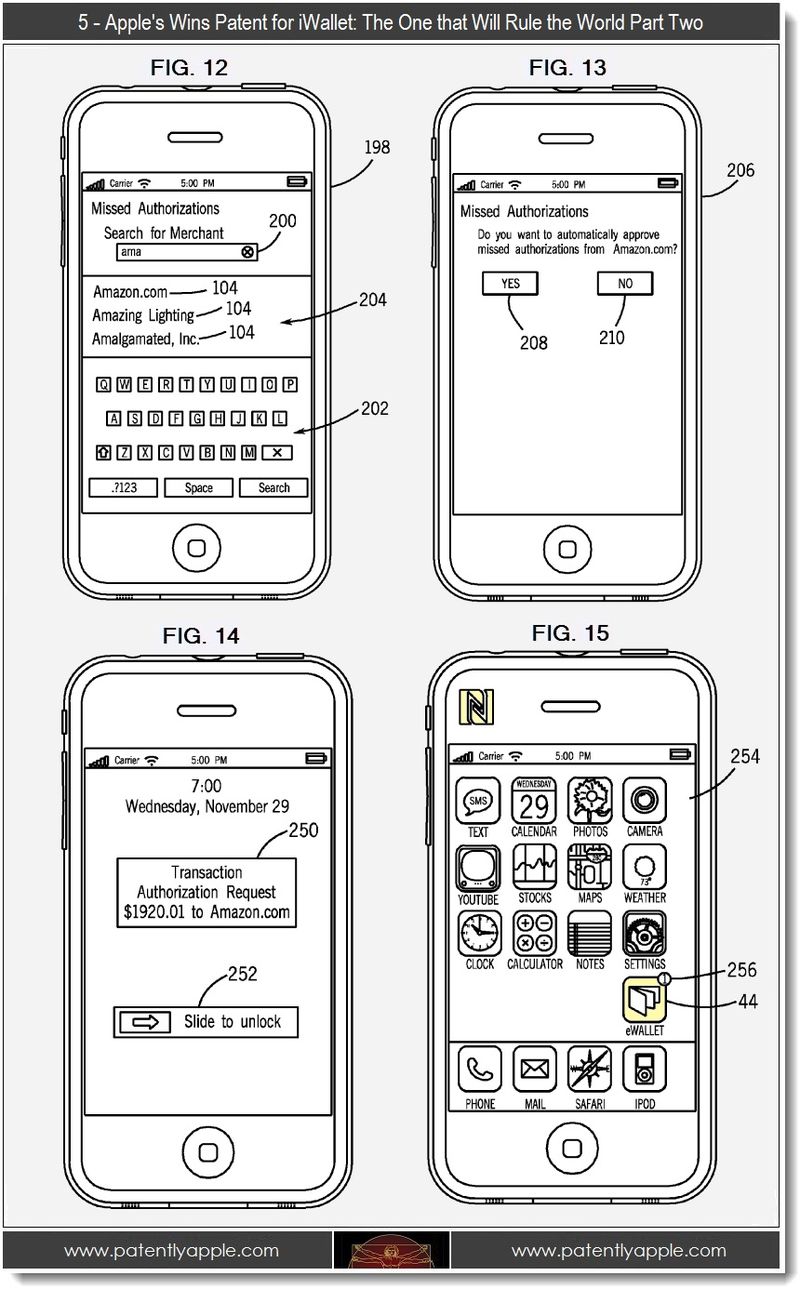 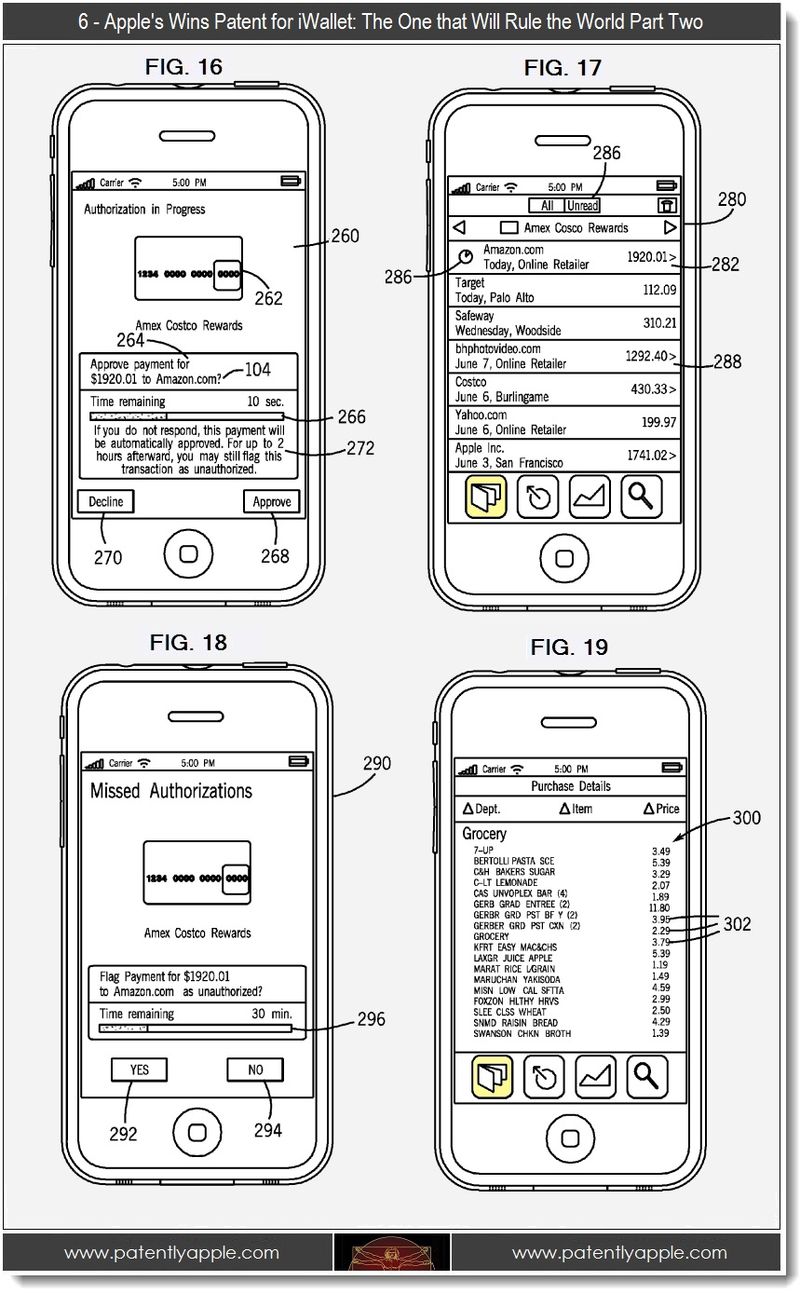 Apple's patent FIG. 19 shown above is a screen shot of the application of FIGS. 14-18 illustrating line item details of a transaction in accordance with aspects of the present disclosure.

This certainly seems like a step in the right direction. I guess that means Apple is expecting to fix the issues such as 5 hour delays on iMessage transmittals. And that when I'm at a hotel without wireless service, and I charge something but can't OK it for a couple of days, I'll still be good without constantly changing iWallet settings.

Finally, it's well past time that Apple partition iTunes into its media and transactional parts.

Note to self, when Apple invents time machine go back to 1990 and buy shares in Apple

Start thinking about the future "Apple Bank." Now there's a business Apple would be good at. :)