Samsung is scrambling to get Microsoft to produce documents and testify in deposition in the case relating to Apple v. Samsung. Samsung believes that Microsoft is in possession of prior of a touch device that will kill Apple's case. But after reading the patent, Samsung seems to miss the boat. Microsoft's patent clams don't even mention touch technology as being a core value. Secondly, when touch is mentioned vaguely in the patent's description, it's not about Multi-Touch technology which is at the core of Apple's iOS based devices. The type of touch technology vaguely mentioned in Microsoft's patent is equaled to the kind used with a stylus. This is what Microsoft supported back in 2006 when the patent was initially filed. I don't' know: Is it me, or is Samsung just spinning their wheels in desperation here?

In a motion filed with the court late Tuesday, we find that Microsoft is trying to quash a subpoena served by Samsung. In the motion's background they stated that the subpoena arose out of a patent infringement action initiated by Apple, Inc. against Samsung in the Northern District to California. Microsoft states that they understand from discussion with Samsung's counsel that Samsung is attempting to prove that the Apple patent in suit is invalid over various prior art systems, among which are one or more systems disclosed in Microsoft's Patent 7,933,632, entitled "Tile Space user Interface for Mobile Devices." 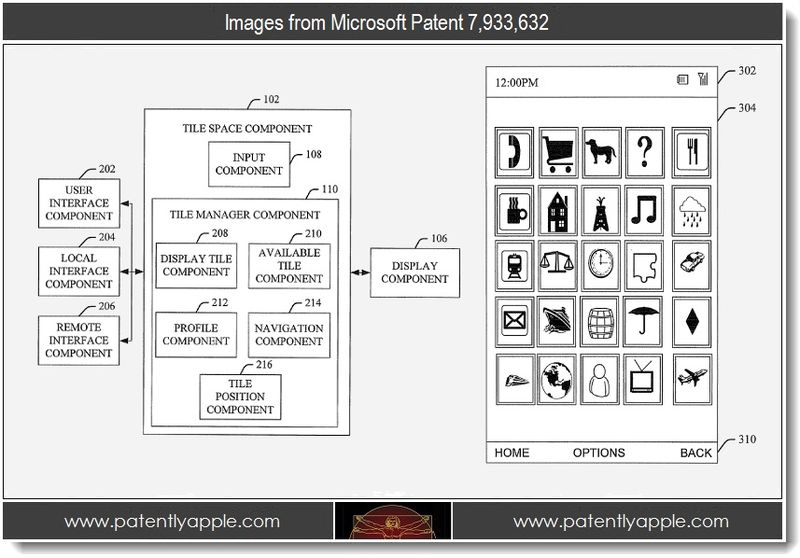 The subpoena seeks documents and deposition testimony on the systems disclosed and claimed in that patent. Microsoft requests that the court quash the subpoena because it places an undue burden on them in view of the insufficient time allowed to properly respond (seven days) and that aspects of the subpoena were thought to be "objectionably vague."

Last week Patently Apple posted a report titled "Gravity Tank Seeks Protective Order against Apple & Samsung Subpoenas." In that report we showed how both Apple and Samsung are scrambling to bolster their case with key witnesses in the Apple v. Samsung lawsuit. Yet this is the second time within a week where potential witnesses have filed motions in court complaining about Samsung's surprisingly aggressive subpoenas.

The motion was filed in the United States Washington Western District Court, Seattle. The presiding Judge in this case is noted as being Judge Marsha J. Pechman.