Today marks the day that Apple takes another leap forward in multi-touch technology. Apple has just won a knock out Multi-Touch Skin technology that will allow Apple to create next generation devices that are multi-dimensional in nature like a multi-touch sphere or a TV remote that has multiple touch areas for different controls. Apple could license the technology to car companies for creating multi-touch skin based steering wheels that could be responsive to gestures to turn the radio on or answer the phone for hands free operation. It could apply to sporting apparatus or even on guitar frets so as to provide feedback to a music analysis program. If Apple gave their competitors a headache in court with their traditional Multi-Touch patents, then they're competitors are going to need a lot more Tylenol once they realize what Apple has just won: Boom!

Touch pads and touch screens are input devices for operating a device. With a touch pad, such as touch pads on a personal laptop computer, the movement of the input pointer on a display generally corresponds to the relative movements of the user's finger as the finger is moved along a surface of the touch pad. Touch screens are a type of display screen that can include a touch-sensitive transparent panel that overlays the display screen. When using a touch screen, a user typically makes a selection on the display screen by pointing directly to objects (such as GUI objects) displayed on the screen.

In both of these cases, the user moves one or more fingers on a two-dimensional surface to operate the device. However, for the operation of many devices, it is desirable, preferable or even necessary for the user to move his or her fingers over a three-dimensional surface. Thus, there is a need for enabling multi-touch inputs and gestures in the operation of such devices.

This also relates to a multi-touch skin that can measure not only the magnitude (Z) of a touch, but also the force of the touch in one or more directions, i.e., the x, y and/or z directions. The four types of data can enable a broad vocabulary of actions and gestures.

Apple's patent FIG. 5 illustrates an exemplary embodiment. Remote control 200 of FIG. 5 remotely operates another device. The device can be, for example, a consumer electronics product such as a television. The remote control can have a power button 210 and additional buttons 214, such as a numeric pad, for its operations. It should be noted multi-touch skins 240 and 245 are not contiguous. 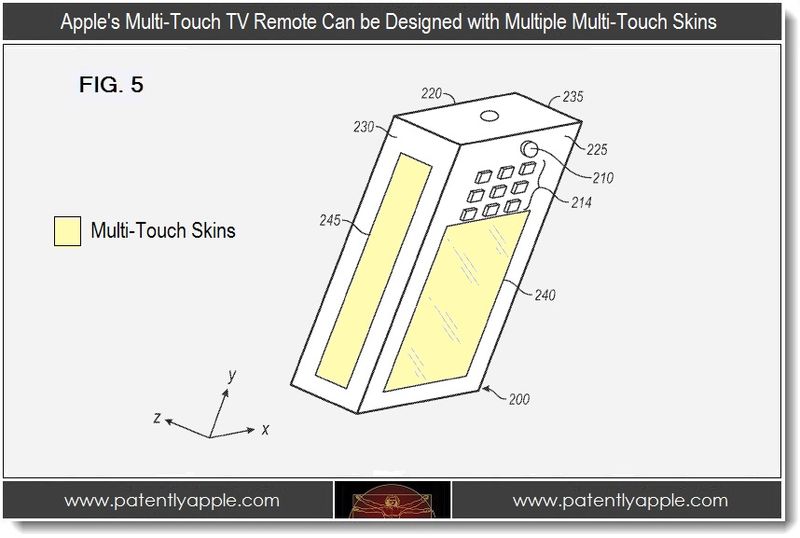 Apple's patent FIG. 5 illustrates an embodiment in which two two-dimensional skins are positioned along three dimensions of an object to enable multi-touch inputs in the operation of the object.

The placement of one or more multi-touch skins spanning three dimensions of an object, such as a remote control, enables gestures for operating the object. For example, the movement of the user's thumb across multi-touch skin 240 can be used to control the selection of a channel. A downward movement of a thumb can numerically decrease the channel number, while an upward movement of the thumb can numerically increase the channel number.

Similarly, the movement of one or more fingers along multi-touch skin 245 can be used to reduce or increase volume. Thus, a user can grasp the remote control and simultaneously select the channel and volume through multi-touch gestures on skins 240 and 245.

Apple's patent FIGS. 1A and 1B illustrate an exemplary embodiment of a single multi-touch skin spanning three dimensions of an object. In accordance with one embodiment, object 10 illustrated in FIGS. 1A and 1B can be a piece of sporting equipment, such as a tennis racket, golf club or hockey stick. All great tools for trainers and trainees alike once associated with analysis software. It might even work as a smart sock for the Nike + iPod system. It's an idea that definitely opens new door and frontiers. 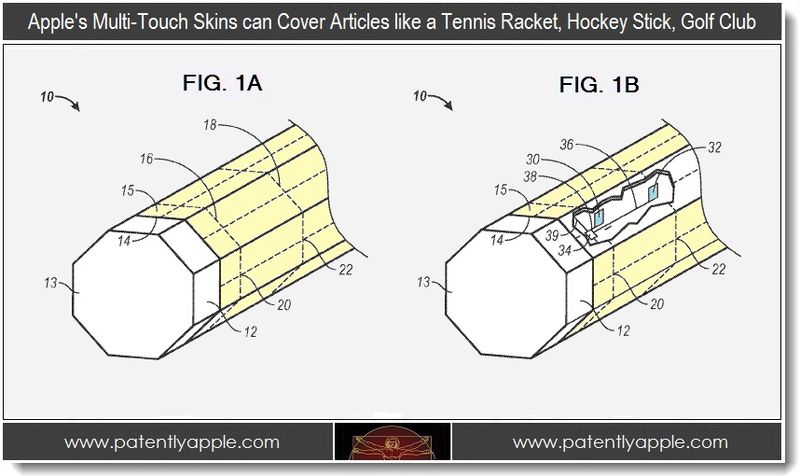 Apple credits Steve     Hotelling and Wayne Carl Westerman as the inventors of this patent which was originally filed in Q2 2007, just as the iPhone was being launching. Apple lists 20 patent claims.