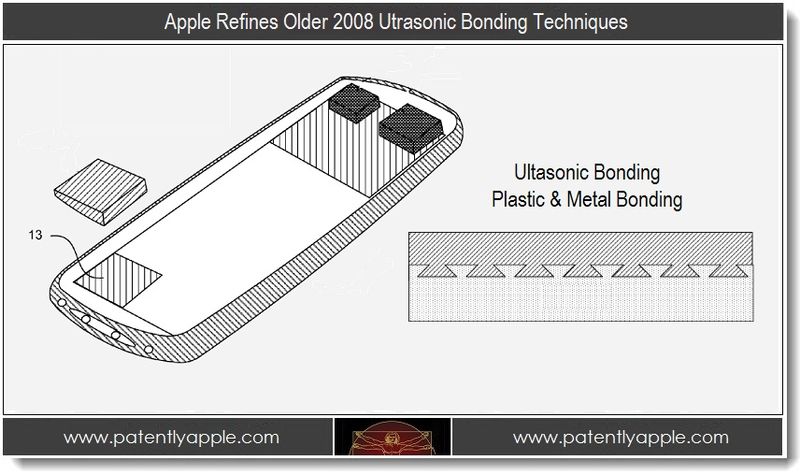 On March 15, 2012, the US Patent & Trademark Office published a patent application from Apple that refines an older 2008 patent on using Ultrasonic bonding in products like the 2009 metal back iPhone and current iPods. Apple may have refined the process of ultrasonic bonding in their latest Apple TV and iPad designs where it's necessary to bring metal and plastic together to save on costs and to keep the devices lighter.

The proliferation of media players, cellular telephones and numerous other electronic devices has grown immensely in recent years. Many of the wide varieties of such devices have given rise to some interesting manufacturing developments. For example, many electronic devices have housings that are made from several different parts, as well as complex mechanical structures, features, and/or other internal parts that must also connect or attach to the housing. These different housing parts and internal parts that must attach to each other are often made from different materials, which can present various challenges in the manufacturing process.

One common mode of attachment is simply to use an adhesive to affix one part to another. The various drawbacks to using adhesives are well-known, and include, for example, relatively lesser limits on bonding strength, the tendency of some adhesives to gradually fail over time, and the possibility that some adhesives do not work well with bonding some materials. This last issue can be particularly problematic where parts made from entirely different materials are to be attached to each other, such as, for example, metal and plastic.

Alternatively, different parts can be welded or otherwise fused to each other as another mode of attachment. In the case of metal parts, however, the high heat associated with a traditional welding process can alter the shape, color and/or texture of the metal parts. Such high heat can also damage or affect other parts that may be in the vicinity of the weld. As such, many types of welds cannot be performed at later stages of an assembly process. Further, the complexity of features or other internal parts is limited to relatively simple components where the fusion welding of metal parts to each other is concerned.

Ultrasonic Welding is used in some iPod & iPhone Models

The Disadvantages of Ultrasonic Welding

Unfortunately, the ability to ultrasonically weld plastic parts together has traditionally limited the kinds of materials that can be used where such attachment techniques are to be used. While many thermoplastic parts can be fuse-welded together at relatively low temperatures, other materials (e.g., metals) require much higher temperatures for fuse welding. In addition, fuse welding is typically limited to the joining of parts made from the same or similar materials.

As such, Apple's design team has found it to be traditionally impossible to substitute metal for plastic parts in a design. This serves to limit the abilities of designers with respect to the materials that can be used in a particular design, such as for the housing and internal features or parts of an electronic device having complex internal features. In the event that such a change or adjustment is desired, then the mode of attachment typically must also change from an ultrasonic weld to an adhesive or other type of attachment that is suitable for attaching a plastic part to metal part. For example, where an internal plastic part is to be affixed to an inner surface of a metal housing, then an adhesive or other similar mode of attachment must typically be used.

While many designs and techniques for manufacturing electronic and personal devices have generally worked well in the past, there is always a desire to provide new and improved designs or techniques that can make it easier for a manufacturer or provider to combine parts made of different materials. In particular, the ability to attach plastic parts to metal parts with an approach that is quick, flexible and reliable is desired.

It is an advantage of Apple's present invention to provide for the ready and secure attachment of plastic items to metal items without requiring the use of an adhesive. This can be accomplished at least in part through the use of a metallic surface that is adapted to accept the flow of melted plastic into one or more surface irregularities therein, such that a plastic item can be ultrasonically bonded to a metal item having such a metallic surface.

Apple's patent FIG. 6 illustrates a top view of an iOS device like an iPad housing having been treated with metallic surface regions and non-treated metallic surface regions. In some instances, such as in the case of a chemical etching, it may be easier just to treat the entire metal part. In other instances, such as in the case of microdrilling or laser cutting or texturing, it may be more efficient to limit such surface treatments to those areas that require it.

As shown, the iPad-like device includes a metal housing component 111 having various surface areas and regions. Surface area 113 one such area that is designed for ultrasonic bonding to attach a plastic part thereto. Within this surface area is a first surface region 114 that is specifically treated to facilitate an ultrasonic bond. Again, such surface treatment can be chemical etching, microdrilling, laser cutting or texturing, or any other suitable machining or other surface treatment process. 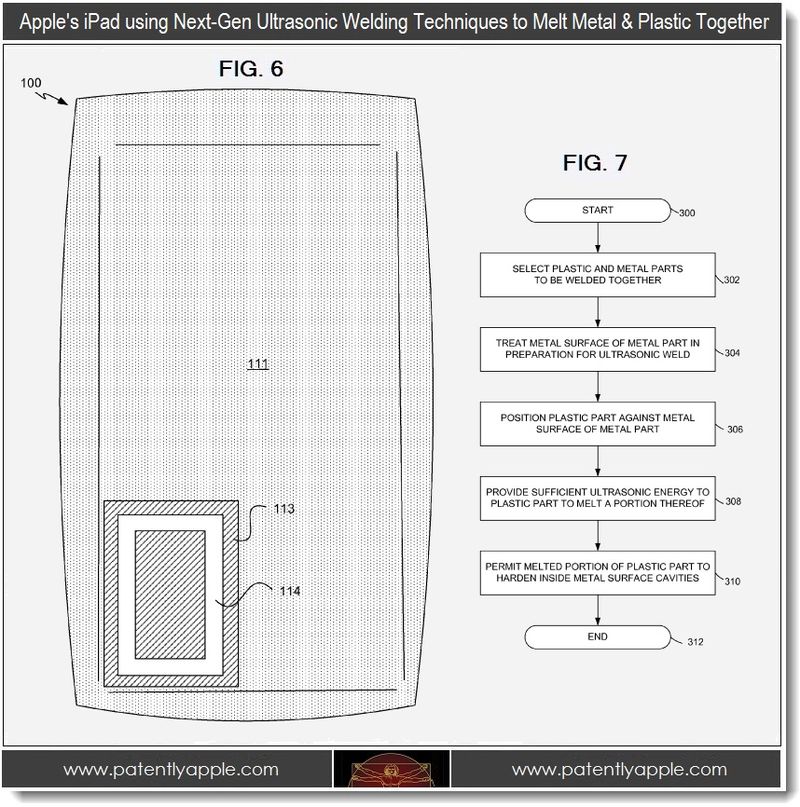 The treated surface region is preferably shaped or designed to mate or match with a similarly sized and/or shaped energy director on a plastic part that is to be bonded thereto.

Although the illustrated shape is a rectangle, the bond of which can form a hermetic seal with a similarly shaped energy director on a plastic part, it will be readily appreciated that any other shape or size can also be used. In fact, a continuous bond or shape is not necessary. For example, it may be desirable in some instances only to treat the four corners of the rectangle, rather than the entire rectangle. The mating plastic part may then have a continuous rectangular energy director, or may alternatively have four energy director points to match the treated regions on the metallic surface. Many other alternative designs and arrangements are also possible, and all such alternatives are contemplated for use with the present invention. In fact, this technique was likely used in the manufacturing of Apple's Apple TV.

In Apple's patent FIG. 1A noted below we see an exploded top view perspective of an older iPhone's metallic housing and an internal plastic component adapted to be attached to an inner surface of the iPhone's housing. By way of example, internal component 30 can be a speaker or volume control box having a plastic outer housing, among other possible items. 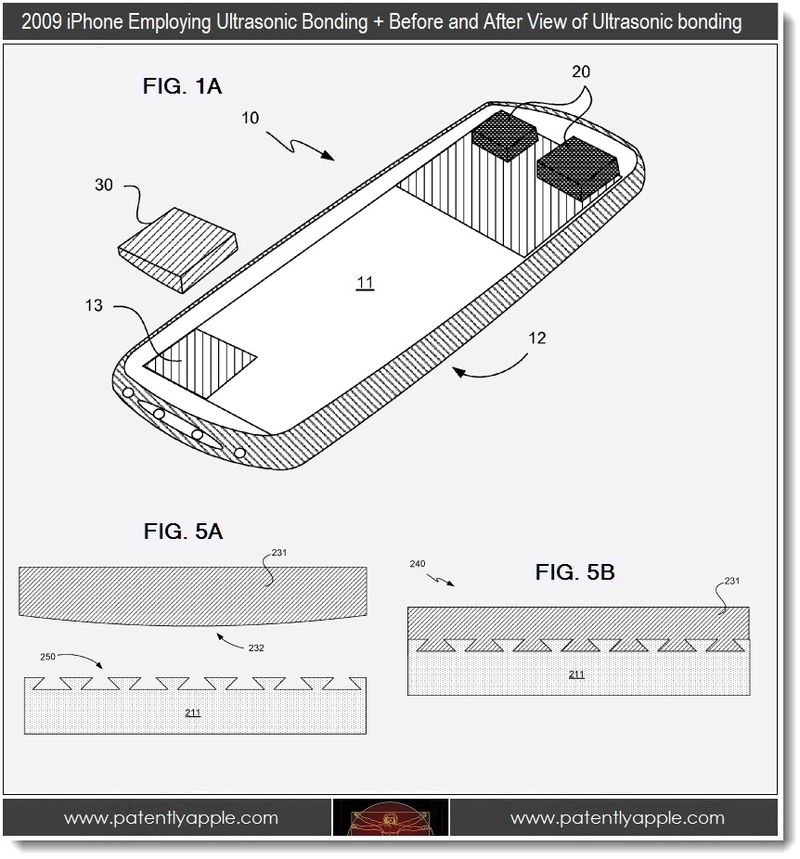 In Apple's patent FIGS. 5A and 5B we see an exemplary alternative metallic surface region and plastic part before and after ultrasonic bonding. Although natural surface irregularities (not shown) may still exist in the metal surface, the designated metal surface region 250 has been machined specifically to include a significant amount of undercuts and cavities to facilitate mechanical interlocking when plastic material is melted, flowed and hardened therein. As shown in FIG. 5B, the resulting ultrasonic bond 240 then affixes the plastic wall 231 of the plastic part to and into the surface of the metal housing.

Apple's patent application was originally filed in Q3 2011 by inventors Christopher Prest and Douglas Weber. However, this patent is co-pending to Apple's 2008 granted patent by the same inventors with a patent by the same name. The patent claims change alone warranted Apple applying for a new patent.

If you're a musician and/or programmer in the music biz, Apple has an interesting patent that they state relates to a graphical user interface for programming musical sequences. Here's a temporary link to that patent if you want to read it. But remember, temporary links are only good for 48 hours from posting.

And lastly, there's a report out of Korea that claims that Bloomberg didn't get the story right on Apple's current iPad display suppliers.