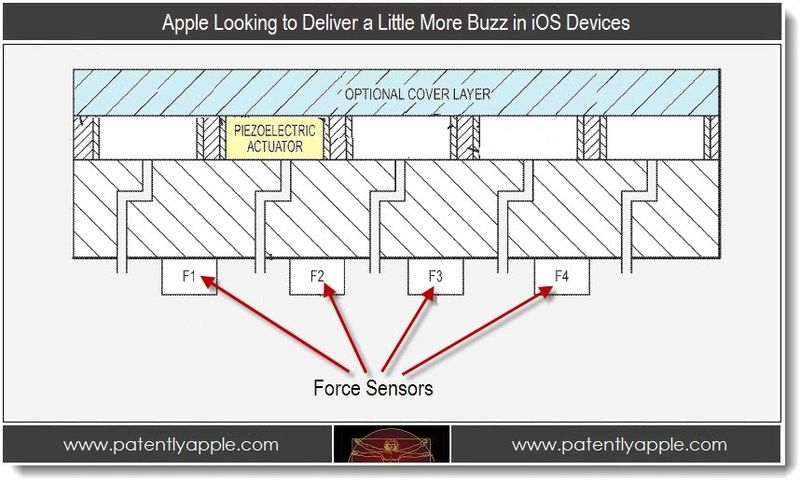 A new patent application from Apple this morning shows us that they're looking at delivering a little more buzz to future iOS devices. Then again, it could be a pulse, vibration and/or other sensation because what's being described here is advanced haptics. The buzz before the launch of the "new iPad" was that Apple was going to introduce haptics from Senseg that would give users the ability to actually feel textures on their new Resolutionary Retina Display. I was stunned at the quality of the Retina display and I would have flipped if they would have added this feature. But it wasn't meant to be, just yet. Apple first introduced the idea of bringing haptics to the iPhone a year ago and today's patent sheds a little more light on the subject. Advanced haptics will freak us out at the realism it could bring to science books, artwork, photography – and yes, games. Advanced Haptics could very well end up being a game changer for the senses, to be sure. With a little patience, we'll one day have our cake and eat it too.

Existing touch-based user interfaces typically have a touch panel and a visual display component. The touch panel may include a touch sensitive surface that, in response to detecting a touch event, generates a signal that can be processed and utilized by other components of an electronic device. The touch sensitive surface may be separate from the display component, such as in the case of a trackpad (or Magic Mouse surface), or may be integrated into or positioned in front of the viewable area of the display screen, such as in the case of a display touchscreen.

In either case, the display component may display textual and/or graphical display elements representing selectable virtual buttons or icons, and the touch sensitive surface may allow a user to navigate the content displayed on the display screen.

Existing touch-based user interfaces do not provide haptic feedback to a user. Haptic feedback may be any type of tactile feedback that takes advantage of a user's sense of touch, for example, by applying forces, vibrations, and/or motions to the user. The user can typically only feel the rigid surface of the touch screen, making it difficult to find icons, hyperlinks, textboxes, or other user-selectable input elements that are being displayed.

One of the latest Apple inventions revealed today by USPTO relates to touch-based user interface devices that can both receive an input from a user and provide haptic feedback based on the input from the user. In one embodiment, a touch-based user interface device may include a haptic feedback layer that includes one or more piezoelectric actuators that are embedded in a nonconductive material.

In some embodiments, a printed circuit board layer may be positioned underneath the haptic feedback layer. The printed circuit board layer may include one or more metallic traces that are configured to supply a voltage to each of the piezoelectric actuators embedded in the haptic feedback layer. Some embodiments may also include input sensors, such as a displacement sensor and/or force sensor for recognizing and distinguishing between various touch-based input gestures from a user.

Force sensors may allow for distinguishing between various input gestures that may be associated with different commands. In one embodiment, the force sensors may be used to differentiate between a click and a scroll command. As an example, the processing device may associate a higher amount of force, such as from a tapping motion, with a click command and a lower amount of force, such as from a gliding motion, with a scroll command (or vice versa).

Embedded actuators may serve to insulate the actuators and separate the actuators from one another. In other embodiments, the nonconductive material may be an organic or compliant material that has a sufficiently high modulus of elasticity to deform with the attached embedded piezoelectric actuators. In this embodiment, the nonconductive material may increase and decrease in height as the attached embedded actuators increase and decrease in height. Some examples of organic materials that may be used include elastomers, silicon, thermoplastics, and so on and so forth.

Apple's patent FIGS. 1A to 1C illustrate some examples of electronic devices that incorporate various embodiments of touch-based user interfaces that could take advantage of advanced haptic feedback. Even a MacBook trackpad will be able to provide users with haptic feedback by confirming a user's selection of a particular virtual icon or button on screen like an icon found in OS X Lion's Launchpad. This would be true with Apple's Magic Mouse as well. These are examples of the haptic layer not being directly connected to a display. 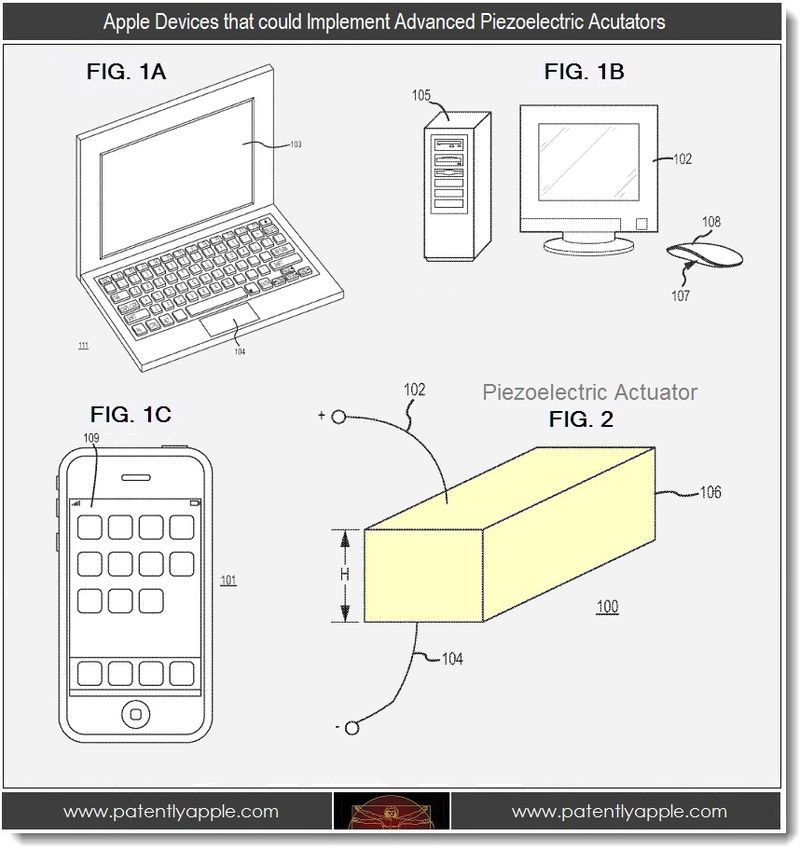 The piezoelectric actuator may include electrodes 102 and 104 and piezoelectric material 106, any or all of which can be transparent, opaque, or a combination thereof. The piezoelectric material can include, for example, a ceramic, polyvinylidene fluoride, one or more natural crystals (such as, e.g., Berlinite, cane sugar, quartz, Rochelle salt, topaz, and/or any tourmaline group mineral(s)), man-made crystals (such as, e.g., Gallium orthophosphate or langasite), bone, polymers, and/or any other material that is able to mechanically deform in response to an applied voltage. 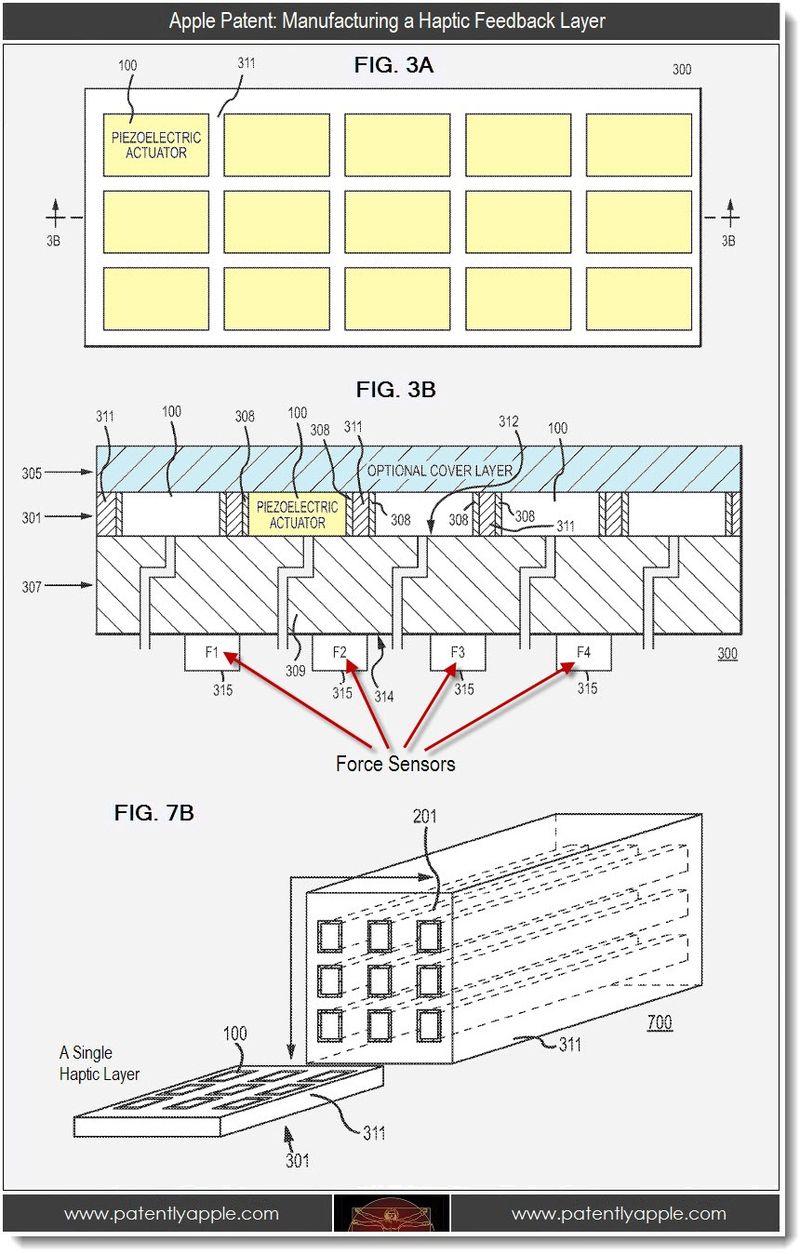 The formed composite blank may then be cut to form different configurations of touch-based user interface devices. In one embodiment, shown in FIG. 7B the blank may be cut along a plane perpendicular to the direction of extension of the strands to form a haptic feedback layer

This past Tuesday we presented a granted patent report titled "Apple Wins First Coded Magnet Patent for iPad Smart Cover." The standard patent process is that we first see the patent application followed by a granted patent some time later - like 18 months for example. The iPad Smart Cover granted patent was in reverse. We got to see the granted patent first. This was confirmed today when the US Patent and Trademark Office published a whopping ten iPad Smart Cover patent applications. The Patent Figures are the same as those presented in this week's report, so we're not going to rehash old news. Here's a temporary link to just one of these new applications but remember, temporary links are only good for a few days. So if you miss it within the first three days after the date of this report, you could be sent to another unrelated patent: Temp link