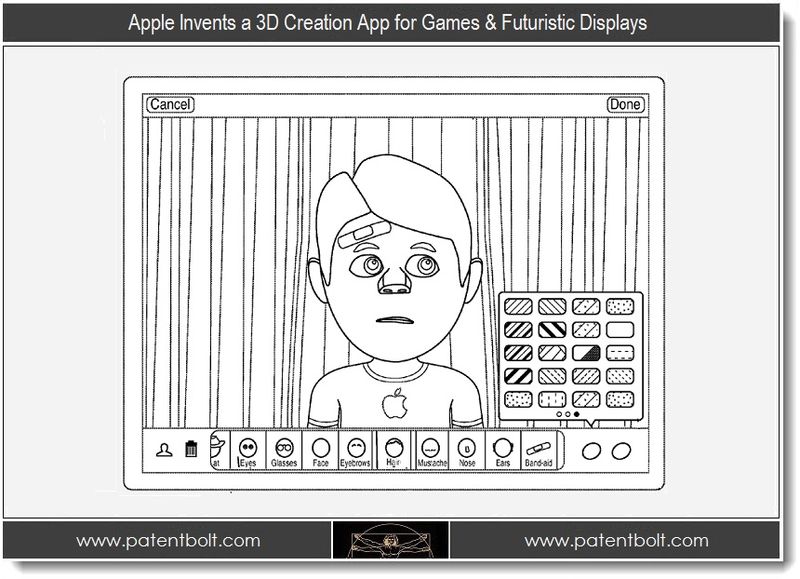 Apple certainly has a fascination for avatar creation apps of late. In the last year or so they've invented several interesting avatar related apps including one for a very sophisticated Personal Shopping app for the desktop and another covering Advanced Avatar Editing for the iPhone. In today's latest patent application, Apple reveals a new application in the making that will primarily be used for avatar creation, though Apple does clarify that they may use the underlying technology in other professional applications. On one hand it's like Photo Booth on steroids and on the other hand it's definitely being aimed at the 3D video game market. In either case it'll be a blast to play with on an iPad. In fact, Apple notes that this app could eventually apply to next generation displays that include "movable," heads-up and three-dimensional (e.g., holographic) systems. Now that caught my attention.

Some electronic devices can display three-dimensional models that a user can control as part of an electronic device operation. For example, gaming consoles can display three-dimensional avatars that represent a user, and the user can direct the avatar to perform specific actions in a game. The three-dimensional models can be constructed from the combination of several assets such as a body, a head, eyes, ears, nose, hair, glasses, a hat, or other accessories. The assets can be placed on and incorporated into the model (e.g., placed on and integrated into an external surface of the model), or placed adjacent to the external surface of the model. To enhance the user's experience, the user can personalize a displayed model by selecting and moving specific assets with respect to the remainder of the model.

In the big picture, Apple's invention covers systems, methods, and computer-readable media for positioning and orienting movable assets on a three-dimensional model. In other words, the invention is about a new 3D Creation App for games and beyond. 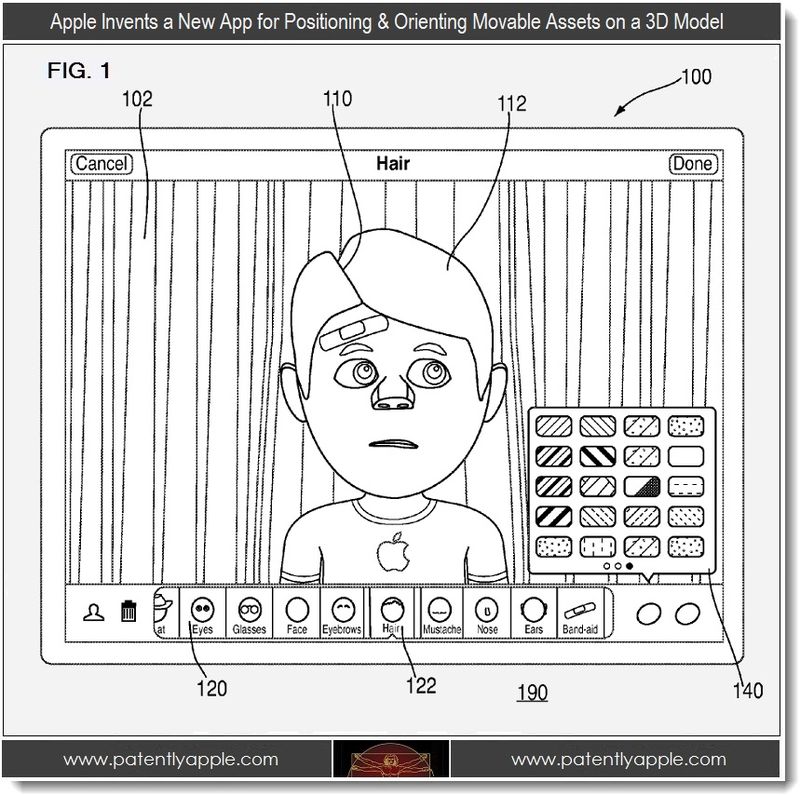 According to Apple, an electronic device (noted as an iPad, iPod, iPhone, MacBook, television or other) can display a three-dimensional model (e.g., an avatar) that may be constructed from several assets. For example, fashion accessory assets (e.g., glasses) can be placed on an external surface of a head asset of the model. Each asset can be placed or disposed on the model in a manner that may ensure that the position and orientation of the asset relative to other portions of the model are consistent when viewed from different angles. When a user moves an asset with respect to the remainder of the model, for example, by dragging the asset, the asset can move in a manner that maintains a consistent asset position and orientation with respect to other portions of the model.

According to Apple, a computer display can include model 110 provided in front of a background 102. The model can represent any suitable object including a real person, an animal, a place, or a thing (e.g., an imaginary being). In some cases, the model can include an avatar. A user can create the model by selecting assets from asset bar 120, and positioning specific assets on the model. The assets can include, for example, a face, mouth, eyes, ears, nose, mustache, beard, hair, eyebrows, glasses, hats, accessories (e.g., jewelry or even Band-Aids), clothing, or other components that can be included on or integrated into a model. The assets can be provided from a source of assets (e.g., a library of assets that may be stored locally on or remotely from an electronic device).

Apple notes that although many of the embodiments of the present invention are described in the patent application as relating to "personal computing devices," it should be understood that the present invention is not limited to personal computing applications, but is generally applicable to other applications. In theory, agencies like the police could use such an app for facial compositions for sketch artist renderings. It could also apply to photo related apps like iPhoto or Aperture. In turn, it could apply to smaller Magazine and Modeling agencies that could use it to jazz up photos with accessories and so forth.

To ensure that the position and orientation of an asset with respect to a model are consistent when viewed from different angles when the placement of the asset is moved to a particular contact point along a surface of the model, each asset can include a pivot point and an asset normal.

The pivot point can define a point of the asset, and the pivot point may have a consistent positional relationship with respect to any particular contact point along an external surface of a model on which the asset is to be placed.

When a user provides an instruction to place or move an asset with respect to a model, a particular contact point on the external surface of the model that corresponds to the user-provided instruction may be identified as a "surface normal." 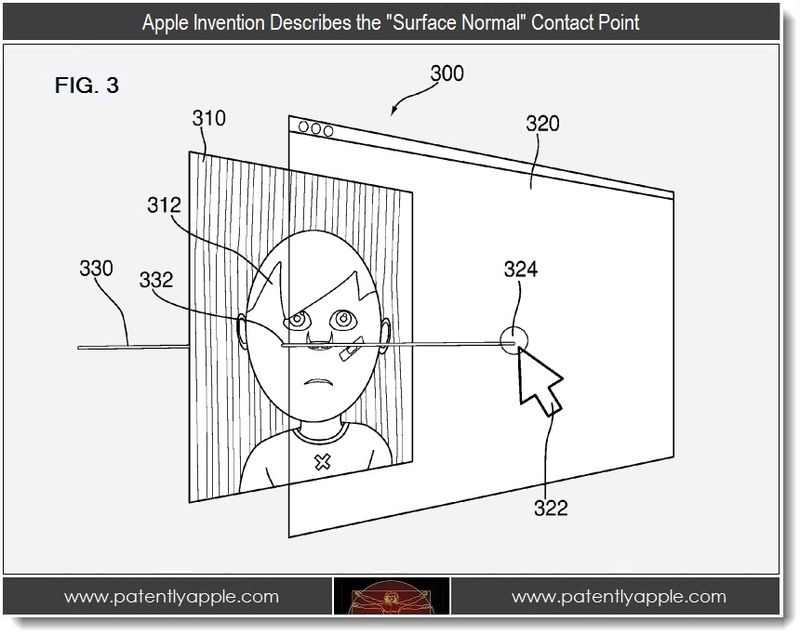 Apple states that an electronic device can determine a point on a model at which to place an asset using any suitable approach. In some cases, an electronic device can identify an input point at which a user instructs the device to place an asset. FIG. 3 is an illustrative representation for identifying a contact point on a model. In general, an "asset" could represent the placement of a head, eyes, ears, nose, hair, glasses, a hat, or other accessories.

In the area of the invention discussing displays used in relation to this app, Apple goes beyond LCD displays and mentions alternative displays such as a movable display and/or a projecting system for providing a display of content on a surface remote from electronic device such as a video projector, a head-up display, or a three-dimensional holographic display.

As another example, display 1110 may include a digital or mechanical viewfinder, such as a viewfinder of the type found in compact digital cameras, reflex cameras, or any other suitable still or video camera. 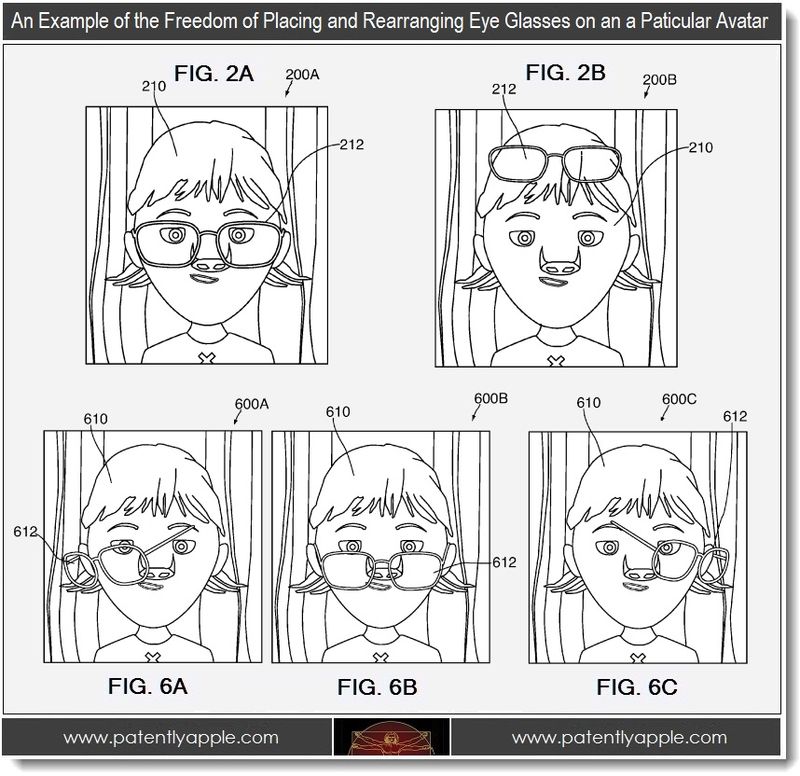 The patent figures noted above are more illustrative views of an asset placed at different positions and orientations on a three-dimensional model.

Apple's patent application was originally filed in Q3 2010 by sole inventor Thomas Goossens of Apple Paris and published today by the US Patent and Trademark Office.

It should be noted that many modern video games today allow the user to customize individual characters in the game and one of Apple's application attributes will be used in a like-minded manner.