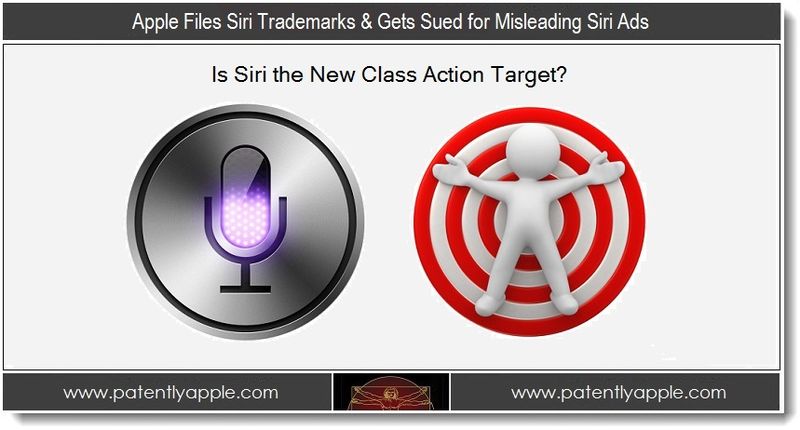 On March 21, 2012, the US Patent & Trademark Office published Apple's latest trademark applications for Siri's stylized microphone logo. Apple has filed six applications for Siri's logo in the US and a single application in Europe under several key International Classes covering such matters as online social networking services, business services, telecommunications, voice recognition, reservation services and more. On another front, a new Class Action lawsuit has been filed against Apple over Siri. One of the five counts listed in this new Class Action involves Apple's alleged misleading iPhone 4S ads featuring Siri. Our report covers the basics of this new case while questioning whether or not this new trend of filing consecutive Class Action lawsuits against Apple is really coincidental. 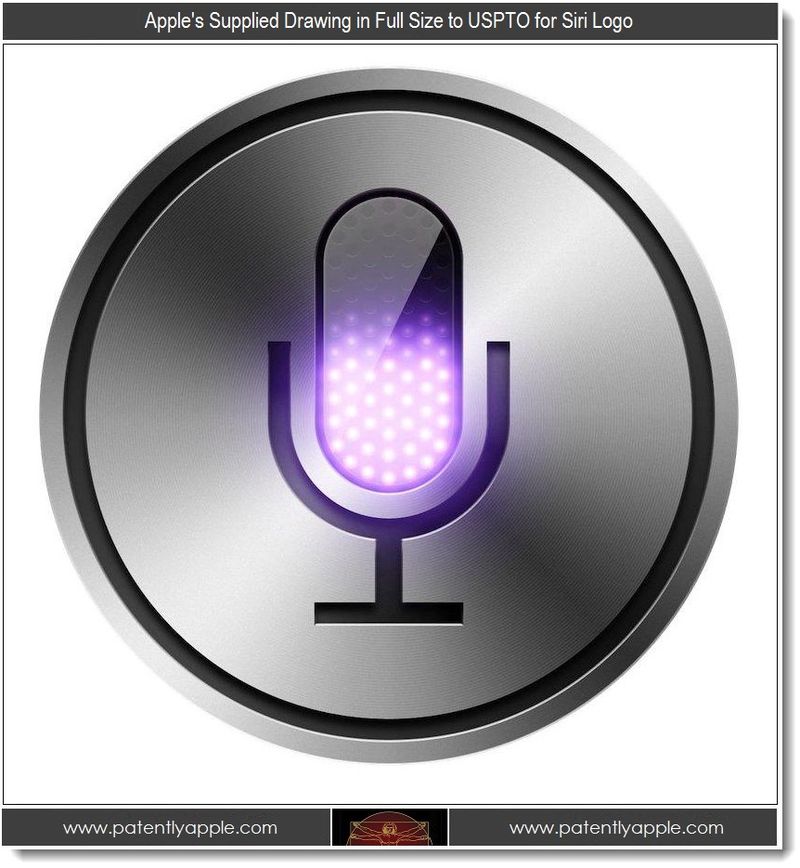 Apple's trademark filing lists the jumbo logo as having a pixel count of 944 x 944.

The noted application in-part illustrated above represents only one of several trademark applications for Siri. Apple has filed six applications in the US so as to ensure that a single objection by a USPTO examiner couldn't uphold the other Siri applications. The following is a list of Apple's applications and the key corresponding International Class details:

Apple's European trademark application (010737765) for the "Siri" logo covers three addition International Classes that are important to note. Without going into all of the details of each, Siri is being covered for such matters as business management and consulting services, advertising agency services, retail store services, services via the internet, trade and business conferences under class 035. All matters of telecommunication services are covered under class 38 and physical storage of electronic data as well as reservation and travel ticket reservation services are covered under international class 039. Update March 25, 2012: Apple has filed for the Siri logo trademark in Hong Kong China under application number 302195037. Apple has limited this particular filing to International Classes 9, 41 and 42.

On all of the applications noted above, Apple asserts a claim of priority based on Jamaican application number 58924, filed 09/21/2011.

As you can see below, Apple's Siri trademark (non-logo) is moving along quickly through the various stages of review by the US Patent and Trademark Office.

The trademark's history table noted above for Apple's Siri would indicate that the trademark could be granted to them before their World Wide Developer Conference in June. That of course, is based on there being no opposition being filed with the US Patent and Trademark Office over this trademark. Time will tell.

Despite the salesmanship of a seasoned Apple cult leader, it appears that a growing number of iPhone 4S users simply think of Siri as little more than a gimmick in its current form. Some take it all in stride while others are steaming mad.

A case in point would be a Brooklyn man which recently launched a class-action lawsuit against Apple over Siri, claiming the feature can't understand directions, locate nearby stores, and often produces incorrect answers.

If that wasn't enough, a new case came to light today. Court documents show that another class-action lawsuit has been filed by Daniel Balassone and Benjamin Swartzman. The new lawsuit states that Apple's Siri doesn't deliver as promised on TV ads. They claim that "Apple's advertising and marketing campaign is designed to induce consumers to purchase the iPhone 4S because of Siri's features. Apple's advertisements regarding Siri are false and misleading. The iPhone 4S's Siri feature does not perform as advertised."

The complaint goes on to state that "Apple's marketing campaign was geared toward this "amazing" new feature to convince consumers to choose iPhone 4S over the iPhone 4 despite the additional cost. However, because Siri does not work as advertised, the iPhone 4S is nothing more than an expensive iPhone 4."

The complaint offers a rather stunning factoid if they could prove it. Under number 21 of the complaint under "Numerosity" they state the following in-part: "The members of the Class are so numerous that joinder of all members is impractical. Plaintiffs are informed and believe, and on that basis allege, that the proposed Class currently contains well over thirty million members." Even though they later say that the "exact number is not known," I'd like to know what cloud that the thirty million mark number ever came from. The six counts listed in the Class Action Lawsuit are listed as follows:

Is this a New Legal Tactic against Apple?

Over the last year, I had noticed behind the scenes that Apple was being bombarded by Class Action lawsuits regarding an e-book pricing model championed by Apple and various publishers. Patently Apple didn't cover these lawsuits, as the sheer number of them claiming the same complaint appeared to be some kind of orchestrated campaign against Apple. There were so many class action lawsuits that it has forced the US Justice Department to open an antitrust investigation.

This tactic now appears to be spilling over to Apple's iPhone 4S feature called Siri. The first Class Action was filed last week and coincidentally a second one was launched today. Is this really a coincidence? If you were a competitor, wouldn't this be one of the legal means that you'd use to try and hassle your competitor with? Isn't it a way to smear your competitor's reputation, by pretending that it's the public that's really angry here instead of a specific competitor? Isn't it a way to temper the magic that the public perceives about the iPhone's killer feature? I don't know. But it sure smells like this is a new tactic being hatched against Apple and, I suspect, one that will continue for some time. I think we're only seeing the tip of the iceberg in respect to Siri based Class Action lawsuits – but only time will tell if that's fact or fiction.

Where do you stand on this new Class Action lawsuit trend? Do you agree or disagree?  Let me know.

Class action lawsuit regarding e-books was filed by Seattle law firm
with history of working with Amazon.

I think people are ridiculous, siri was introduced by apple as a "Beta" product and not a Finished product.
I think it should be treated as such, and I'm here to tell you that it for the most part does do what the tv ads say it does, I would not put it past samsung, google and motorola to smear apple in this way. If it turns out to be a campaign from some other company I hope that they get the spotlight of the law put on them and their dirty little secrets are found out.