Apple Could Own the Thunderbolt Trademark in 30 Days

On March 14, 2012, the US Patent & Trademark Office officially published Apple's latest trademark activity for Thunderbolt. The notice was mailed out on February 22, 2011 with the publication date noted as March 13. Technically the trademark has been registered to Apple in order to get into the US Patent and Trademark Office's Official Gazette. But there could still be some fireworks until it's officially a done deal.

For the record, the Official Gazette provides anyone who believes they would be damaged by the registration of a published mark an opportunity to challenge the proposed registration. Once the trademark has been published in the Official Gazette, anyone who believes that the registering party's use of the mark might damage him or her has 30 days in which to file an opposition to the registration. If such an opposition is made, the registering party will be informed and then he must fight it or abandon the trademark.

The Official Publication from the US Patent and Trademark Office 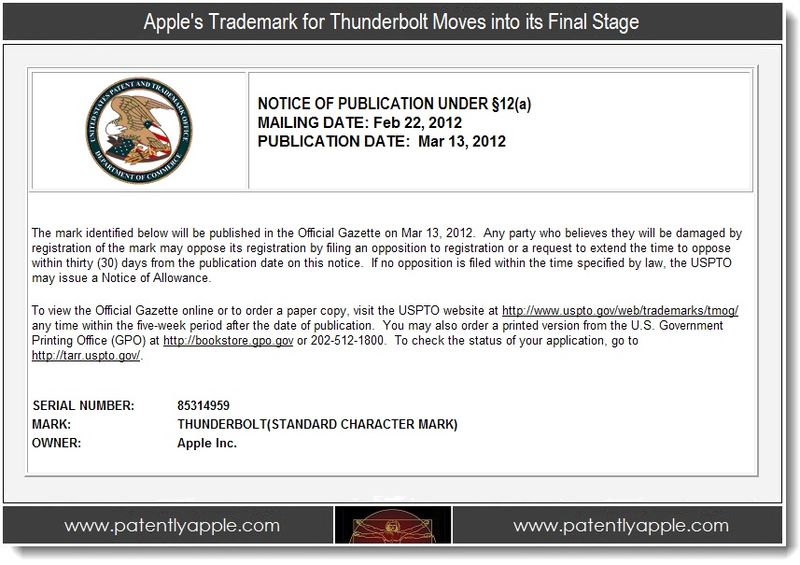 Will Intel be opposing Apple's move to own the Thunderbolt trademark? Will Apple hand over the trademark to Intel in 30 days? Which way will it go? I guess we'll know next month.

We got the iPad's display story right twice this quarter. On January 11, 2012 we posted a report titled "Sharp is Reportedly Out of the Race for iPad 3 Display Production." Yesterday's new's from Bloomberg confirms that we got the news on that one bang on. Then in late February we posted a second report on Sharp ramping up on thier IGZO displays for tablets. Today's news from the Wall Street Journal reports that "Sharp's Panels for New iPad Delayed," due to a delay. We covered the reasoning for the delay in our February report.