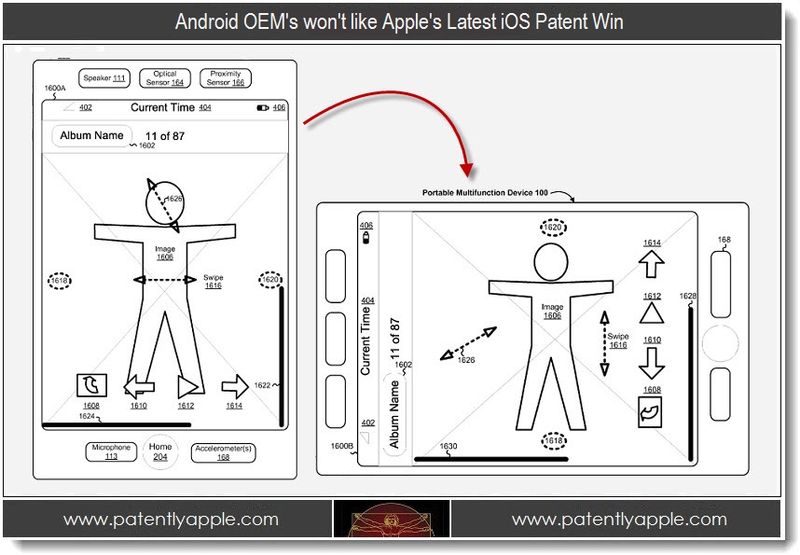 The US Patent and Trademark Office officially published a series of twenty-five newly granted patents for Apple Inc. today and we've already covered two of them that touched on Apple's Multi-Touch and iWallet technologies and systems. But there's one more to report on today that could be a blockbuster for Apple's legal team and have Android OEM's scrambling to get it dissected. Apple's latest patent win may hold some mind boggling smartphone and tablet basics such as a display changing from vertical to horizontal modes. The Verge's Nilay Patel has posted a fine report today titled "Slide to unlock: how Apple's patents are changing Android." One of the patents that Patel touches on is that of patent 7,469,381 which he dubs a notorious patent because of the effect it's had on Android OEM's. If that had an effect, then Apple's latest patent is bound to be a killer. Apple's patent holds a whopping 76 claims which is well over triple what the '381 patent possessed. So if the first patent challenged Android OEM's, then this one could be a mega-ton bomb in comparison.

Apple has been granted a patent that generally relates to portable electronic devices, and more particularly, to portable devices that display portions of electronic documents and/or portions of lists of items. Due to the importance of this patent, we'll review Apple's complete 2007 Patent Background so as to give this patent win full context.

As portable electronic devices become more compact, and the number of functions performed by a given device increase, it has become a significant challenge to design a user interface that allows users to easily interact with a multifunction device. This challenge is particular significant for handheld portable devices, which have much smaller screens than desktop or laptop computers. This situation is unfortunate because the user interface is the gateway through which users receive not only content but also responses to user actions or behaviors, including user attempts to access a device's features, tools, and functions. Some portable communication devices (e.g., mobile telephones, sometimes called mobile phones, cell phones, cellular telephones, and the like) have resorted to adding more pushbuttons, increasing the density of push buttons, overloading the functions of pushbuttons, or using complex menu systems to allow a user to access, store and manipulate data. These conventional user interfaces often result in complicated key sequences and menu hierarchies that must be memorized by the user.

Accordingly, there is a need for portable multifunction devices with more transparent and intuitive user interfaces for navigating portions of electronic documents and/or lists of items that are easy to use and that do not reduce the screen area available for the display of documents, lists, and other content. Such interfaces increase the effectiveness, efficiency and user satisfaction with portable multifunction devices.

The above deficiencies and other problems associated with user interfaces for portable devices are reduced or eliminated by the disclosed portable multifunction device. In some embodiments, the device has a touch-sensitive display (also known as a "touch screen") with a graphical user interface (GUI), one or more processors, memory and one or more modules, programs or sets of instructions stored in the memory for performing multiple functions. In some embodiments, the user interacts with the GUI primarily through finger contacts and gestures on the touch-sensitive display. In some embodiments, the functions may include telephoning, video conferencing, e-mailing, instant messaging, blogging, digital photographing, digital videoing, web browsing, digital music playing, and/or digital video playing. Instructions for performing these functions may be included in a computer program product configured for execution by one or more processors. 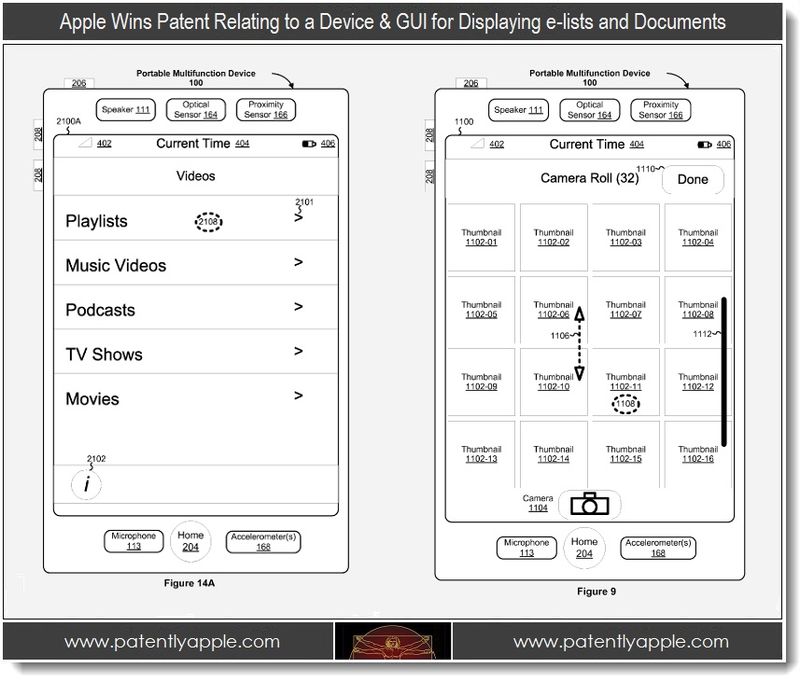 Apple's patent FIGS. 13A and 13B shown below illustrate exemplary user interfaces for viewing images in an album. The key aspect of this according to Apple's claims is that it is illustrating how a user interface will alter as in transitions from vertical to horizontal modes with differing UI information presented or subtracted. 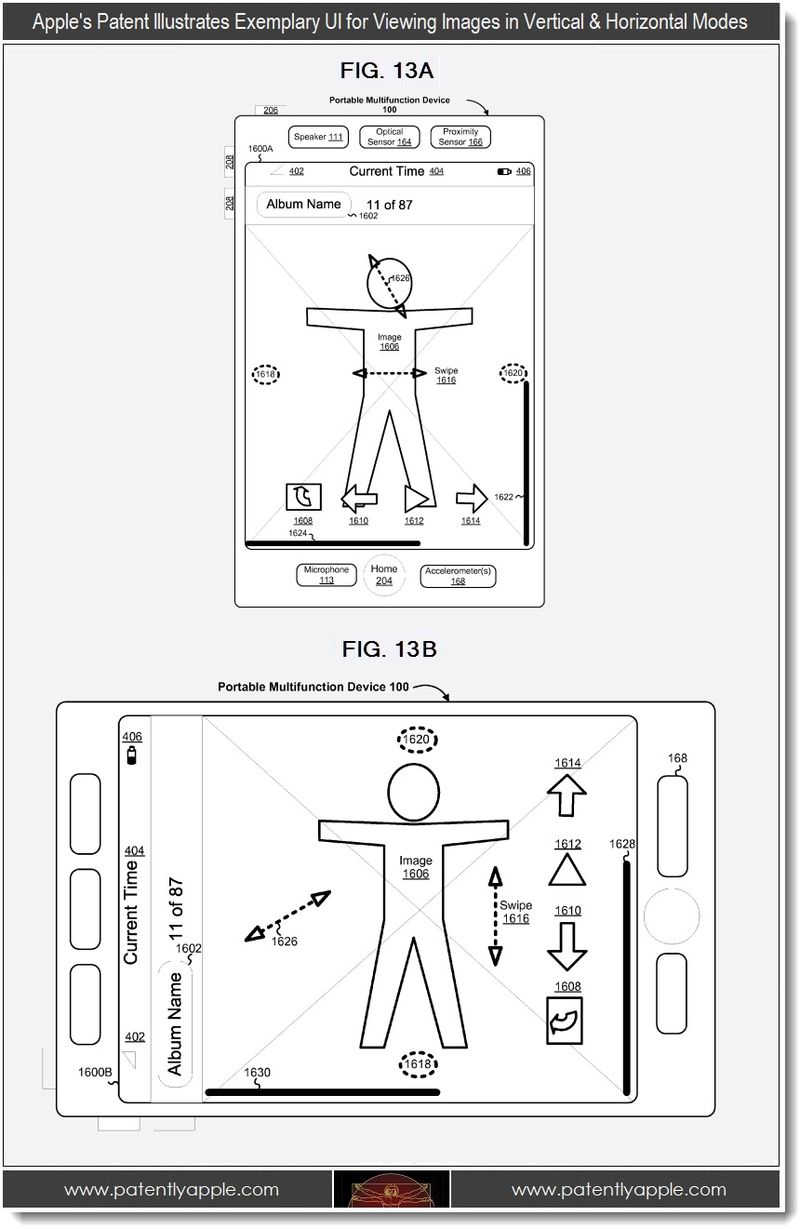 In order to fully understand and appreciate Apple's granted patent, you'll have to review granted patent 8,130,205 along with its 76 patent claims. Apple credits Scott Forstall, Henri Lamiraux, Andrew Platzer, Michael Matas and Imran Chaudhri as the inventors of this patent which was originally filed in Q1 2008 and published today. The patent's history goes back to Q1 2007.

Until Apple was in court with their '381 patent, I would have never thought that it would have ended up being such a big deal. But it was, and Apple's latest patent only compounds those problems for Android OEM's.

The Verge's Nilay Patel ended his report by stating that the question for Android smartphone manufacturers was whether Apple's patent challenges would be a limitation or an opportunity for them. On that point he's bang on. In fact, recent patents from Google and Samsung have proven that they're seeking to innovate at a fairly rapid pace. In fact, a few recent patents indicate that Google is working on Camera Motion & Timing Gesturing while Samsung is preparing to launch Flexible touch display products in 2013. And that's Okay with Apple's CEO Tim Cook. During a recent Goldman Sachs Technology conference , Tim Cook stated that "As long as people invent their own stuff, I love competition."

For now, the legal battles are bound to continue as Apple's original 200 patents protecting the iPhone are only beginning to roll out of the US Patent and Trademark Office. Legally speaking, things are bound to get even nastier before they get better. Let's hope that one day innovation will rule the day and the court battles will be a thing of the past. Then again, realistically speaking, the lawyers will make sure that never happens.

In other IP Related News: Apple Offered Licensing Deals To Some Patent Foes