The iPhone & iPad are Culprits in Brandywine Lawsuit against Apple 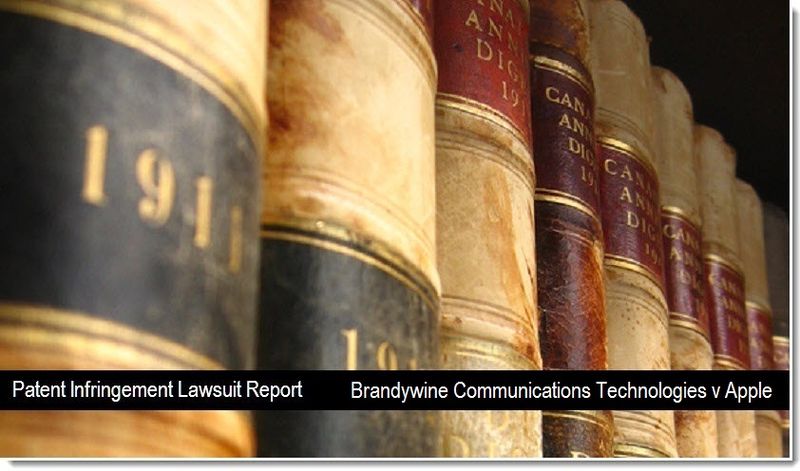 A Communications-Precision Time and Frequency Solutions company by the name of Brandywine Communications Technologies has launched a patent infringement lawsuit against Apple. The case involves the iPhone and iPad's use of voicemail, as presented in their patents.

The first count against Apple stems from patent 5,719,922 titled "Simultaneous Voice/Data Answering Machine." Our patent related graphic below clearly notes that the original owner of the patent is that of Paradyne Corporation, a company which manufactures, and distributes digital subscriber line, frame relay, service level management, and broadband network access products and technologies. The court document makes note that the patents noted in the lawsuit have been legally assigned to Brandywine.

In the First Claim of the lawsuit, Brandywine states that Apple was made aware of their complaint because they were served with an official complaint letter dated October 3, 2011. The formal complaint in this case lists all versions of the iPhone and iPad as infringing on Brandywine patents. 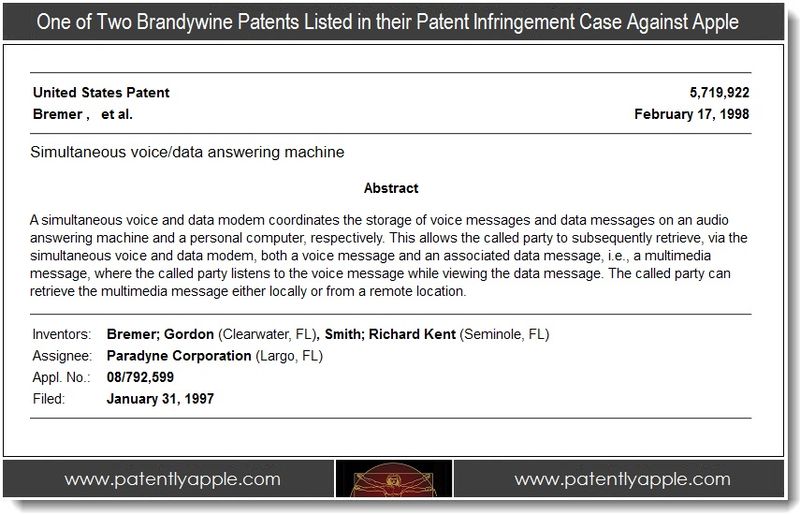 In context with Brandywine's patent "Abstract" noted in our graphic above, the following claims are at the heart of this case. In order to understand Claim 7, which is the key Claim in this case, we provide you with the verbiage of Claim 6 for the sake of context only.

Claim 6: A method for providing associated audio and data messages transmitted simultaneously to a user, the method comprising the steps of:

Claim 7: The method of claim 6 wherein the audio field is a part of the audio message.

The Second Count against Apple involves patent 6,236,717 which carries the very same patent title, abstract and complaint verbiage as presented in Count One against Apple.

Earlier today, Microsoft filed a formal competition law complaint with the European Commission (EC) against Motorola Mobility and Google. We have taken this step because Motorola is attempting to block sales of Windows PCs, our Xbox game console and other products. Their offense? These products enable people to view videos on the Web and to connect wirelessly to the Internet using industry standards.

You probably take for granted that you can view videos on your smartphone, tablet, PC, or DVD/Blu-ray player and connect to the Internet without being tied to a cable. That works because the industry came together years ago to define common technical standards that every firm can use to build compatible products for video and Wi-Fi. Motorola and all the other firms that contributed to these standards also made a promise to one another: that if they had any patents essential to the standards, they would make their patents available on fair and reasonable terms, and would not use them to block competitors from shipping their products.

Motorola has broken its promise. Motorola is on a path to use standard essential patents to kill video on the Web, and Google as its new owner doesn’t seem to be willing to change course. Read.