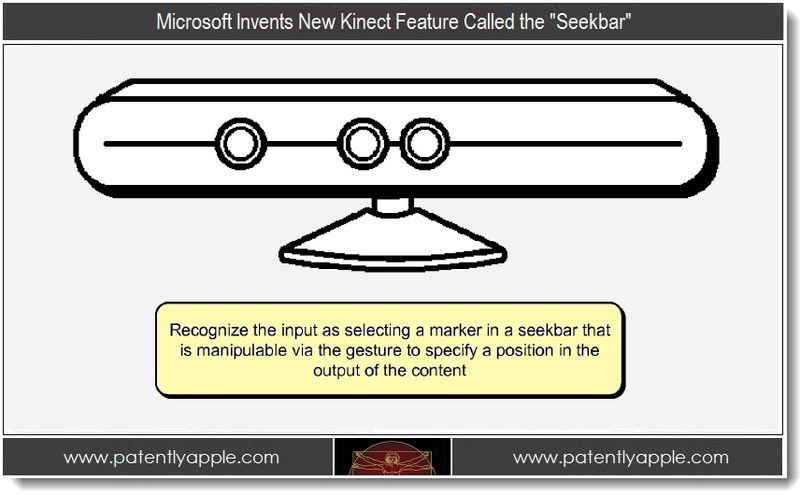 At this year's CES, Microsoft's CEO Steve Ballmer revealed that Kinect was coming to the PC – and on February one they introduced Kinect for Windows. Even though we're not quite sure what Kinect for Windows will offer PC users, a new Microsoft patent application reveals that Kinect will in fact work with documents. Microsoft's latest Kinect related patent focuses on a new feature called the Seekbar. The patent also hints that the Natural User Interface associated with Kinect will work itself into future computers, tablets and phones that have integrated cameras. Considering that it's been reported that Microsoft is already in the early stages of licensing its Kinect technology to the likes of Vizio and Sony, it's only a matter of time before we find that Kinect is integrated into our computer displays and beyond. With Google developing a voice activated TV Remote and Apple thinking of one utilizing Siri and 3D Motion, the race is on to deliver the next TV related Killer App – the Smart Remote. Today, we get a tiny glimpse of what Microsoft has on Kinect's drawing board.

Microsoft's Overview of the new Seekbar

Remote control devices were developed to aid users to navigate through output of content. A TV remote may be located far from the user when the user desires to control output of the content, such as to playback particular television show or have a difficult time navigating to a desired position within the content.

In implementations, a computing device provides users with the ability to control content output using gestures. For example, the user may use a hand gesture to engage a seekbar system, a second hand gesture to drag a handle on the seekbar to change a position at which the content is to be output, and then use a third hand gesture to start playback of the content. This allows the user to control content output without directly interacting with a remote control device (e.g., pressing physical buttons) or other device.

In addition, the seekbar may provide zoom functionality to permit increased control for user selections. For example, a user may select a marker in a seekbar that indicates a current position within a playback of media to be output. Responsive to this selection, the seekbar may show at least a portion of the seekbar in greater detail. In this way, the user can refine their selection on the seekbar automatically.

Further, the seekbar may also include thumbnail previews of the media at different positions along the seekbar. For example, the user may move the marker along the seekbar. In response, the computing device may provide an output of thumbnails that correspond to the locations in the playback of the media through which the marker is moved. This gives the user a quick view of media content without forcing the user to abandon the current media being viewed, which may be displayed as a background. A variety of other functionality is contemplated, further discussion of which may be found in relation to the following sections.

The use of kinect's Seekbar will apply to Computers Too

Microsoft's patent FIG. 1 shown below is an example implementation that is operable to employ content output techniques. Although the following describes output of media (e.g., video, music, television shows), these techniques may be employed for a variety of other types of content, such as pages in a document, collections of pictures, and so on. For example, the seekbar may be used to "scrub" pages in a document (e.g., thumbnails may represent chapter header pages), a set of pictures, position on a map, and so on.

The same is true for hardware. Even though all of the patent figures are geared toward the Xbox using Kinect, the fact is that Microsoft states that "a computing device that may be configured in a variety of ways. For example, the computing device (102) may be configured as a traditional computer (e.g., a desktop personal computer, laptop computer, and so on), a mobile station, an entertainment appliance, a game console communicatively coupled to a display device (e.g., a television) as illustrated, a wireless phone, a netbook, and so forth. 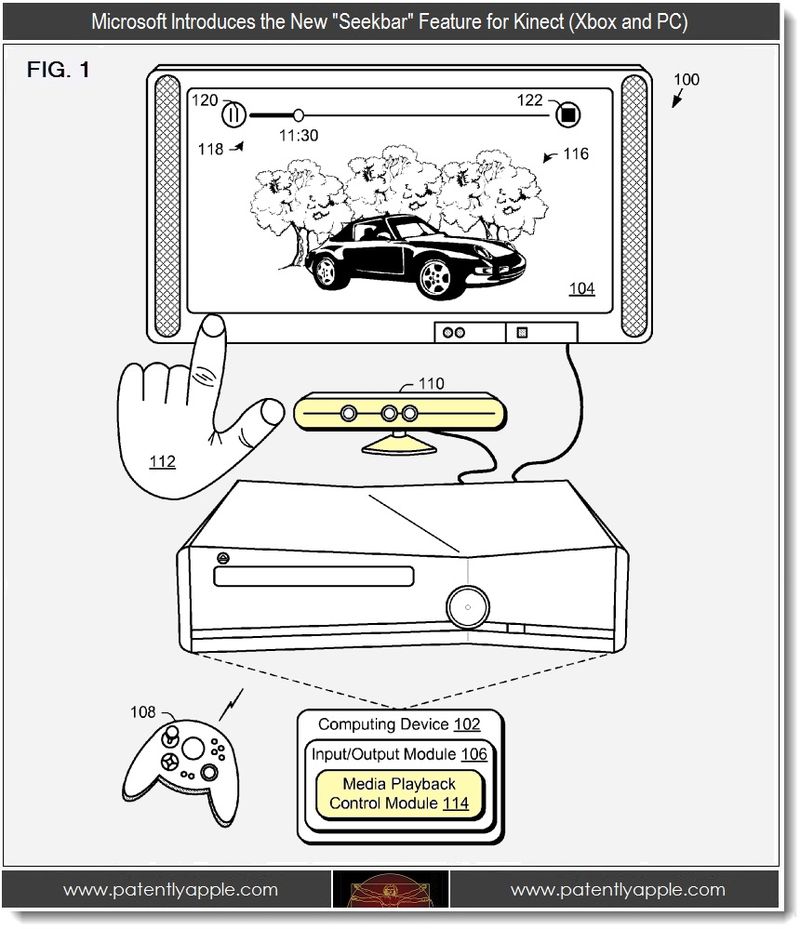 A variety of other hardware devices are also contemplated that involve touch interaction with the device. Examples of such hardware devices include a cursor control device (e.g., a mouse), a remote control (e.g. a television remote control), a tablet computer, a mobile communication device (e.g., a wireless phone configured to control one or more operations of the computing device 102), and other devices that involve touch on the part of a user or object.

The patent also reveals that Microsoft will offer full syncing capabilities between devices much in the way that Apple provides their users with iCloud. 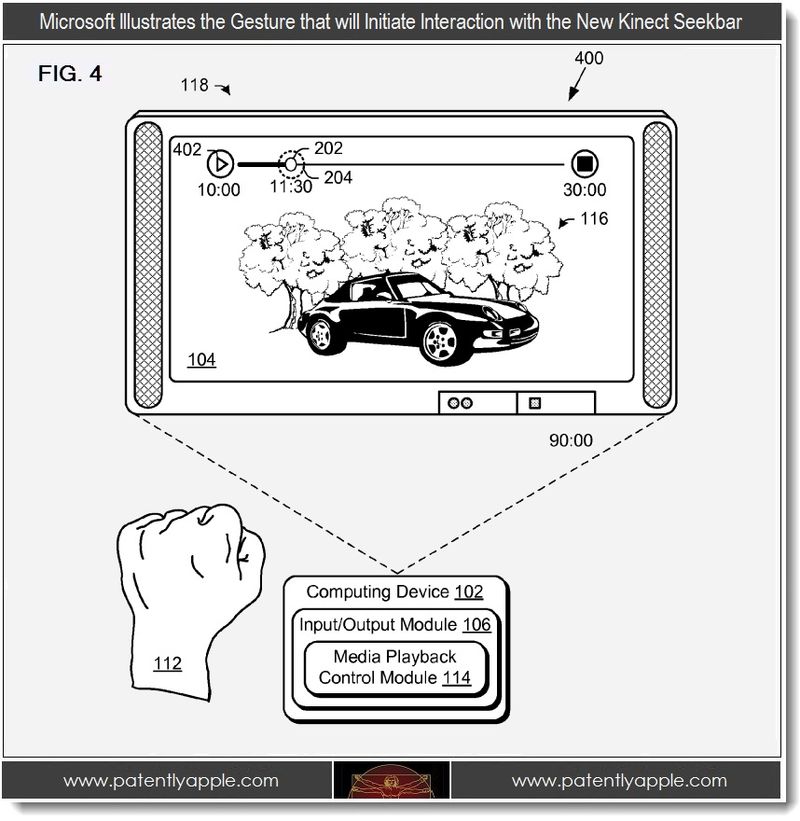 In addition, the seekbar 118 may provide for greater control for user selections by providing "zooming" functionality. After the current position marker 202 is selected, for instance, the seekbar 402 may zoom in to show a section (e.g., of the amount of time) of the overall media in greater detail.

Microsoft's patent FIG. 5 illustrates another gesture used to move a marker of the seekbar selected in the example implementation of FIG. 4 to control playback of media. For instance, the user's hand is indicated as moving to the right through the use of an arrow. Scrubbing may include a variety of other techniques. In an example, if the user scrubs to the edge of the seekbar on the display device, the seekbar may automatically scroll to bring in another section of the timeline.

The media playback control module is also illustrated as providing a thumbnail 502 preview of the media at different positions along the seekbar that corresponds to positions of the marker 202 when moved. For example, the thumbnail of FIG. 5 includes an image taken from the media at a point "12:04" in the playback of the media. This gives the user a quick visual of media at positions along the seekbar without forcing the user to abandon the current media being viewed. 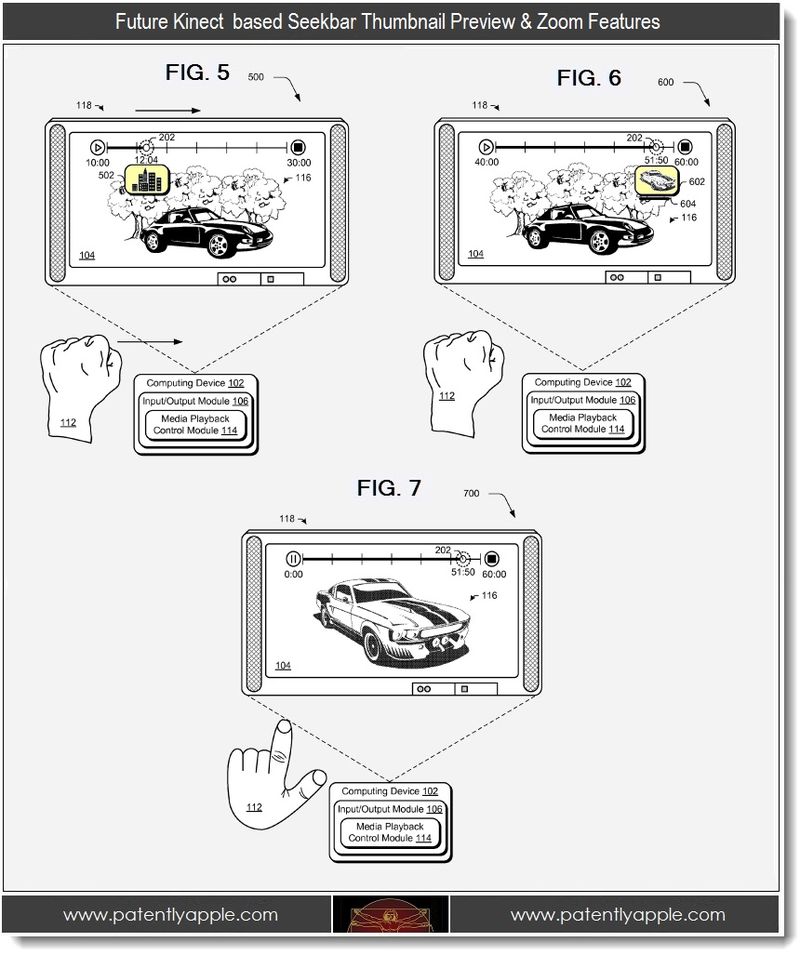 A thumbnail is again displayed in patent FIG. 6. In this instance, the current position of the marker 202 is desired for viewing by the user. The thumbnail 602 is also illustrated as including an "un-zoomed" representation of the seekbar such that a user may "keep track of their place" in the overall playback of the media. Accordingly, as shown in the system 700 of FIG. 7 the user may perform a gesture to disengage from the seekbar (opening of the grasping motion of the user's hand) and start media playback from the frame in the thumbnail.

In another implementation, a user may make a motion to select other controls on the display device such as stop, skip forward, skip backward, pause, or play. Skip forward and backward may involve a specified duration of time, chapter skipping, content skipping, and so forth. Additionally, the media playback control module may be configured to permit user specification of controls. Further, controls may be enabled when the media is in a certain state, e.g. skip controls are enabled when the content is paused and are not enabled otherwise.

Microsoft's Kinect media playback control module may process user input and display onscreen overlays that are configured for interaction by the user. Sources of user input may include the Xbox controller, remote controls, a Natural User Interface (NUI) input device such as Kinect (e.g., a motion detector camera), and so on. Onscreen overlays may include a progress bar, status messages, and visible controls for the user to manipulate.

Other controls are also contemplated, such as a transport button bar that includes transport controls such as play/pause, previous chapter, rewind, stop, fast forward, next chapter, display mode, audio language, subtitle language, and info. Additionally, one or more of the controls may be initiated through use of the Xbox controller, such left/right focus navigation of a transport button bar, use of an "A" button to invoke a high level of zooming functionality, and so on.

Microsoft's filing of this patent application was originally made in August 2010 and published by the USPTO in February 2012.

It would be kind of interesting if Microsoft partner with other electronic companies to have this "seekbar" technology integrated into a television.