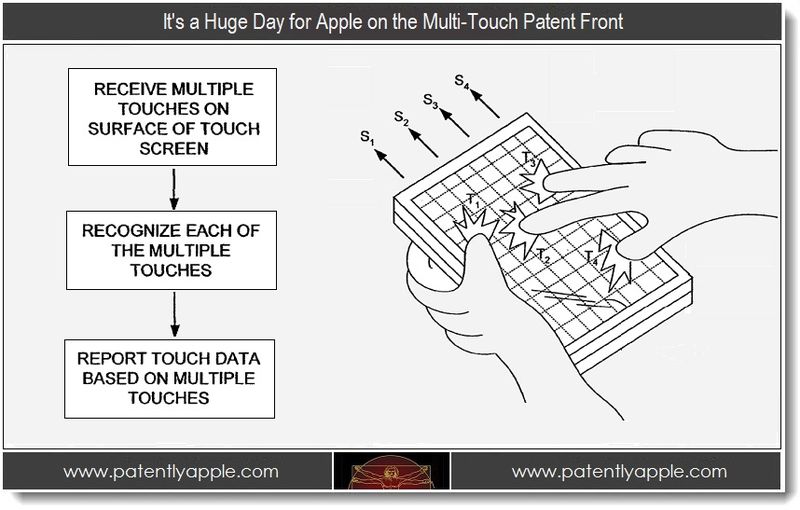 The US Patent and Trademark Office officially published a series of 24 newly granted patents for Apple Inc. today. Today's first granted patent report highlights three out of five important Multi-Touch patent wins. The three key patents cover such matters as multitouch auto scanning, multipoint touchscreens and Apple's 3D curved substrate lamination process that integrates multitouch technology into their Magic Mouse. No matter how you slice it, it's a huge day for Apple on the Multi-touch patent front.

Apple has received a very interesting Granted Patent today which relates to a 3D curved substrate lamination and process used in the creation of the Magic Mouse. After watching ABC's exclusive look into Apple's Foxconn plant operations, it doesn't surprise me to see the many stages behind the making of Apple's Magic Mouse as outlined in the graphics below. In total, there are close to 50 graphics associated with the lamination process that mates with the sensors that creates the final Magic Mouse. If that was manufactured in North America, I suspect that the price of a Magic Mouse would be closer to the price of an iPad 2. 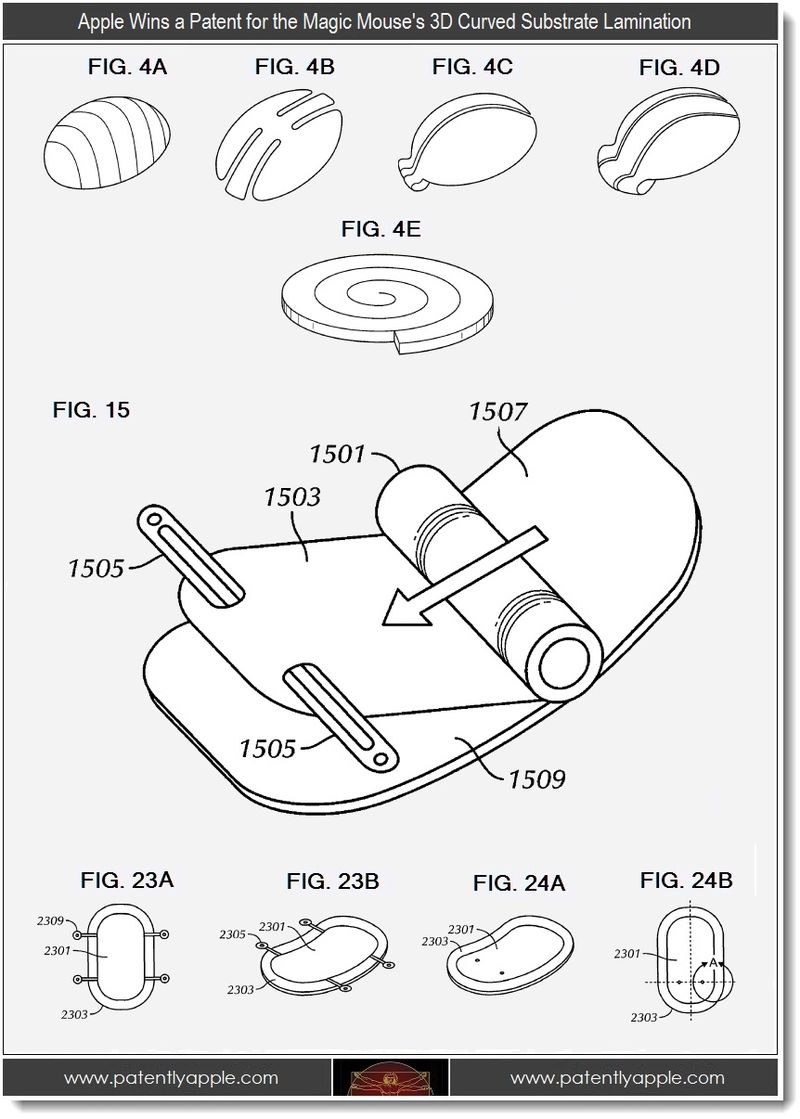 Apple's multi-touch based Magic Mouse debuted on October 20, 2009. Whether this patent will provide Apple with enough ammunition to go after Microsoft's TouchMouse remains to be seen. I don't recall any recent litigation between the two companies and wonder if the bailout funding agreement with Microsoft years ago keeps Apple from suing Microsoft. I guess we'll know over time.

When Steve Jobs introduced the iPhone in a presentation in January 2007, he rocked the mobile smartphone market to its core. The iPhone went on to crush all competitors' phones of the day including those from Motorola. The key to the iPhone was the introduction and integration of Multi-Touch touchscreens and a UI that worked with said touchscreen.

Today's particular granted patent covers multipoint touchscreen technology that was first filed for in 2004 and granted in 2010. The originating 2004 patent covered 11 claims. Today's revised granted patent is now strengthened with a total of 21 patent claims. A few of the updates include: 1) calculating the coordinates of each touch region comprises calculating a centroid of each touch region with the raw data associated with each touch region; 2) the processor calculates the boundaries using a watershed algorithm and 3) reducing the noise in raw data.

Secondly, Apple's invention relates to a display arrangement that includes a display having a screen for displaying a graphical user interface. The display arrangement further includes a transparent touch panel allowing the screen to be viewed there through and capable of recognizing multiple touch events that occur at different locations on the touch sensitive surface of the touch screen at the same time and to output this information to a host device. 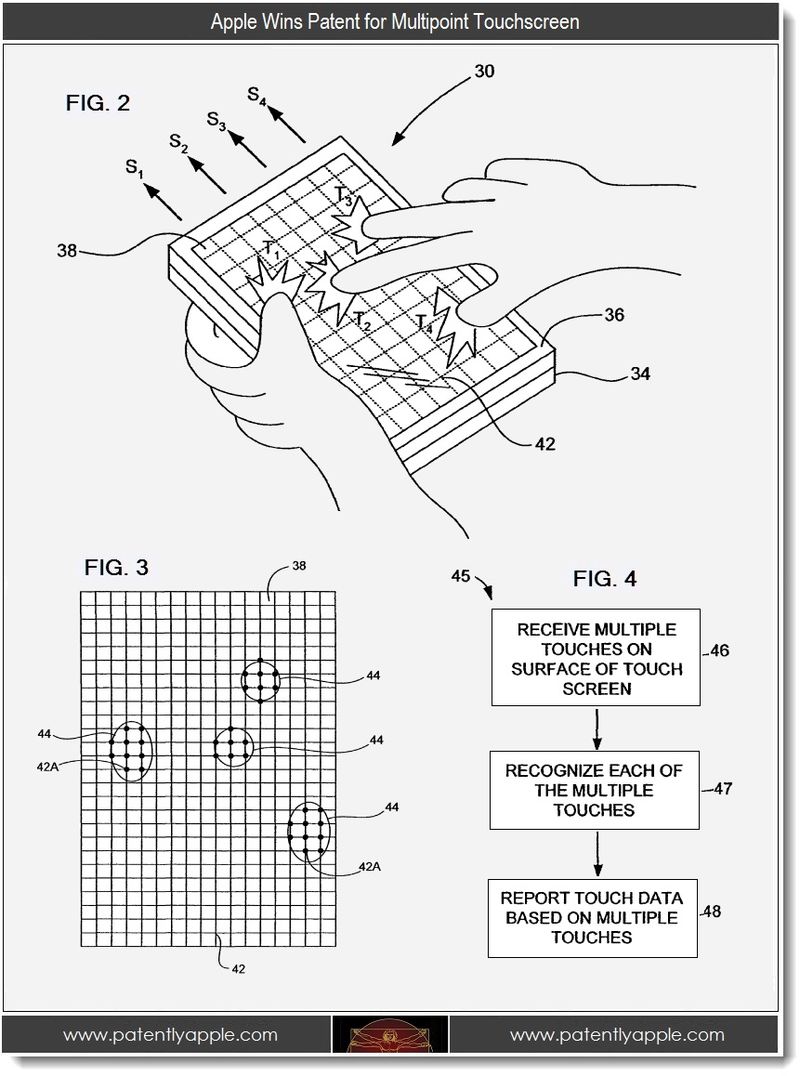 Apple has received a Granted Patent that relates to multi-touch auto scanning. One aspect of the multi-touch touch system relates to disabling components of a touch-panel device during periods of inactivity to conserve power. Components that can be disabled include a touch-panel processor and system clock.

The third aspect of the multi-touch system relates to using a "sniff" mode to scan a touch panel for touch events after a predetermined amount of time has transpired (see Patent FIG. 4 below). The multi-touch system can also have a calibration timer that automatically enables a multi-touch processor and system clocks to perform an active scan and calibration functions after a different predetermined amount of time has transpired. 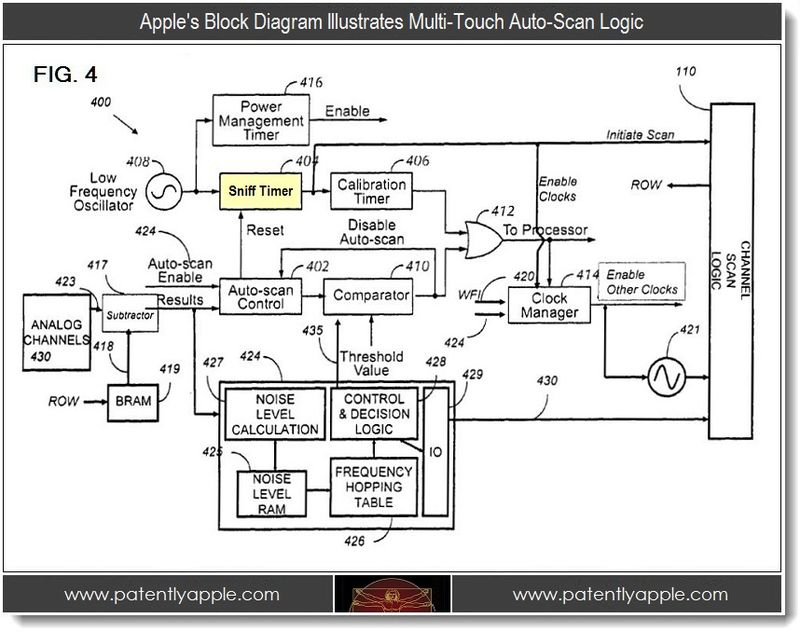 Apple's patent FIG. 4 is a block diagram of one embodiment of auto-scan logic. This figure includes a sniff timer 404 and calibration timer 406 that can be clocked by oscillator 408. After a predetermined amount of time (referred to as "sniff time"), the sniff timer initiates a scan sequence. Apple's auto-scan mode can be comprised to two individual system states: an actual sniff interval during which only a low frequency oscillator and a sniff time is active, and a scan sequence in which a multi-touch panel is actively scanned. The two system states may form the auto-scan mode.

To top off Apple's big day for Multi-Touch patent wins, there's another two to point out. Patents 8,125,455 and 8,125,464 both cover "Full scale calibration measurement for multi-touch surfaces." Both date back to 2007. This may be a case like another patent issued today in that patent 8,125,464 carries updated patent claims over the older 8,125,455 patent. Either way, Apple wins patents for both.

To Engineer, So right on vs the Microsoft / Apple agreement. Most people have no idea about that. I think it also allowed Apple to do Boot Camp to link into Microsoft software on Apple systems. Notice how Microsoft never yelled about that.??

It will be interesting to see how these and other patents play out in future court issues.

Every Android device violates the multi-touch patent, I believe. So, google has already come out with "tablets" that violate them.

The "bailout funding agreement" was a massive cross-licensing agreement. This is why there have been no lawsuits since then-- Apple and Microsoft gave each other cross licenses to their entire patent portfolios (or it appears it was the whole portfolio) in exchange for Microsoft directly paying Apple Billions of dollars over 5 year (With a tiny, public, $150M investment in restricted stock. Apple had $1B in the bank and open credit, so $150M in restricted stock was not a "bailout")

Liked to see Apple sue Google, when, if ever, they come out with a tablet using these newly acquired patents.

"Bailout funding agreement" ignores the stipulation that Microsoft would abandon professional video software after being caught repackaging (with Intel and San Francisco Canyon) Apple's Quicktime Code as Video for Windows.