Is Samsung Preparing to Storm the Gaming Market? 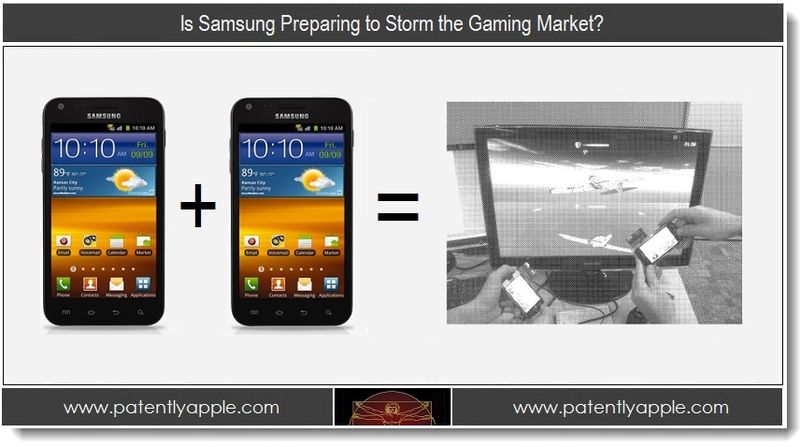 Who would have thought of Samsung storming the Kitchen Appliances market years ago? Who could have guessed that they would storm and succeed in both the Android smartphone market as well as challenge Apple's iPad? So when a 2012 Samsung patent illustrates that they already have a working model of a multiplayer, multiplatform gaming system in the works, you have to take them very seriously. Is Samsung preparing to storm the gaming market? Only time will tell.

Computerized games which involve the use of mobile communication devices, such as mobile phones, and a large screen, such as a TV screen together on the same platform are beginning to appear in the art. Yet, so far no solution has been provided that enables an interaction between the mobile communication device and additional platforms, such as (but not limited to) a TV, Media center, Blu-ray or WMG.

One example of existing systems is WeeWheel, which is a mobile application that uses the built-in accelerometer of the mobile device to detect movement and to convert it into a joystick, mouse and/or keyboard signals for a PC, so it is possible to play games by only moving the phone.

Interestingly, Samsung points to an Apple patent in their background. Specifically, they point to US Patent Application 20090322676, which relates to a remote wand for controlling the operations of a media system. We covered this patent in December 2009 under the title "Apple Reveals New 3D Remote and Possible New iWork Application."

Samsung goes on to states that the wand may be operative to control the movement of a cursor displayed on screen by the position and orientation at which the wand is held. As the user moves the wand, the on-screen cursor may move. The user may use the wand to control a plurality of operations and applications that may be available from the media system, including for example zoom operations, a keyboard application, an image application, an illustration application, and a media application. Samsung considers this prior art.

However, Samsung points out that the prior art solutions don't enable the smooth transfer between different communication channels nor offer a gaming platform that can operate both as an inter-device platform and as a standalone platform. Furthermore, the prior art solutions don't enable running of the game on the mobile device alone. It is therefore an object of the present invention to provide a system that overcomes the above-mentioned drawbacks of the prior art.

It is a further object of the invention to provide a multiplatform system that allows running a game on the mobile device alone, or in cooperation with additional platforms, such as a WiFi-enabled TV.

Samsung's invention relates to a multiplatform gaming system comprising in combination: (a) a mobile communication device provided with circuitry suitable to communicate over one or more communication channels; (b) software provided in said mobile device to receive inputs from one or more sensors of the device, and to transmit control data relying on said inputs over a communication channel; and (c) a gaming platform provided with a display, which platform runs software suitable to receive said control data and to control the behavior of a game according to such control data.

According to an embodiment of the invention the mobile communication device is a mobile phone that incorporates sensors, accelerometers, cameras and microphones.

In another embodiment the invention is directed to a gaming system comprising in combination: (a) a mobile communication device; (b) software provided in said mobile device to receive inputs from one or more image sensors of the device, and to transmit control data relying on said inputs to a mobile gaming client operated by it; and (c) a display, which is suitable to display an image comprising one or more markers related to one or more augmented reality image(s) that can be displayed on the display of said mobile device. 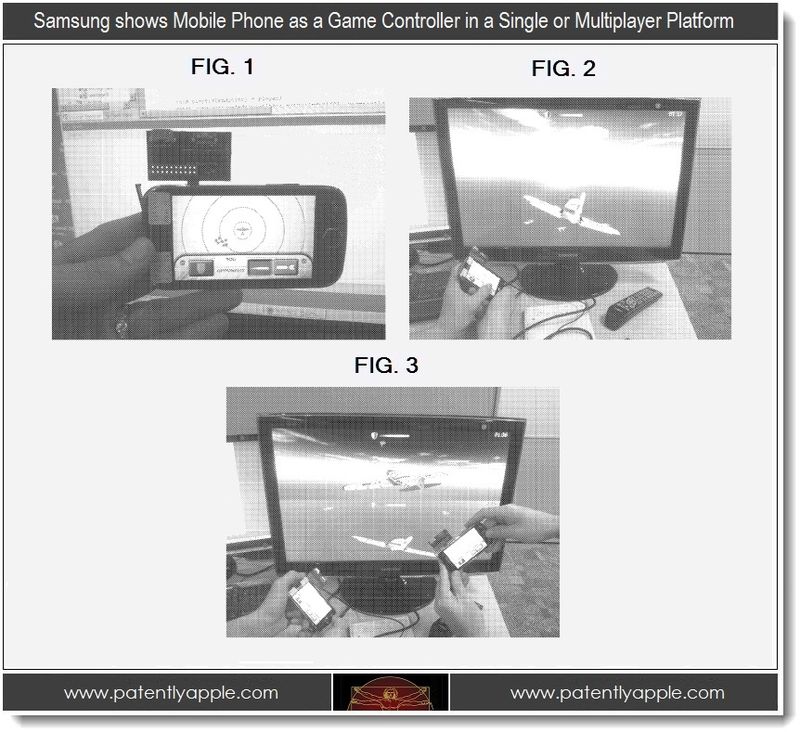 Samsung's patent FIG. 1 shows a mobile device operating as a controller; FIG. 2 illustrates the ruling of an airplane on a large screen using the mobile device in a single player game; and patent FIG. 3 shows a game played as a multiplayer platform.

The Controller uses the accelerometer and gyro systems that are imbedded in the mobile phone to simulate the real pitch yaw and roll angles of the plane direction. The user interface allows the user to operate simulated buttons to activate weapons, e.g. to fire guns and release bombs. In this example all data is sent through a specific network protocol via WiFi communication channel to the TV system. The specific protocol is not described. 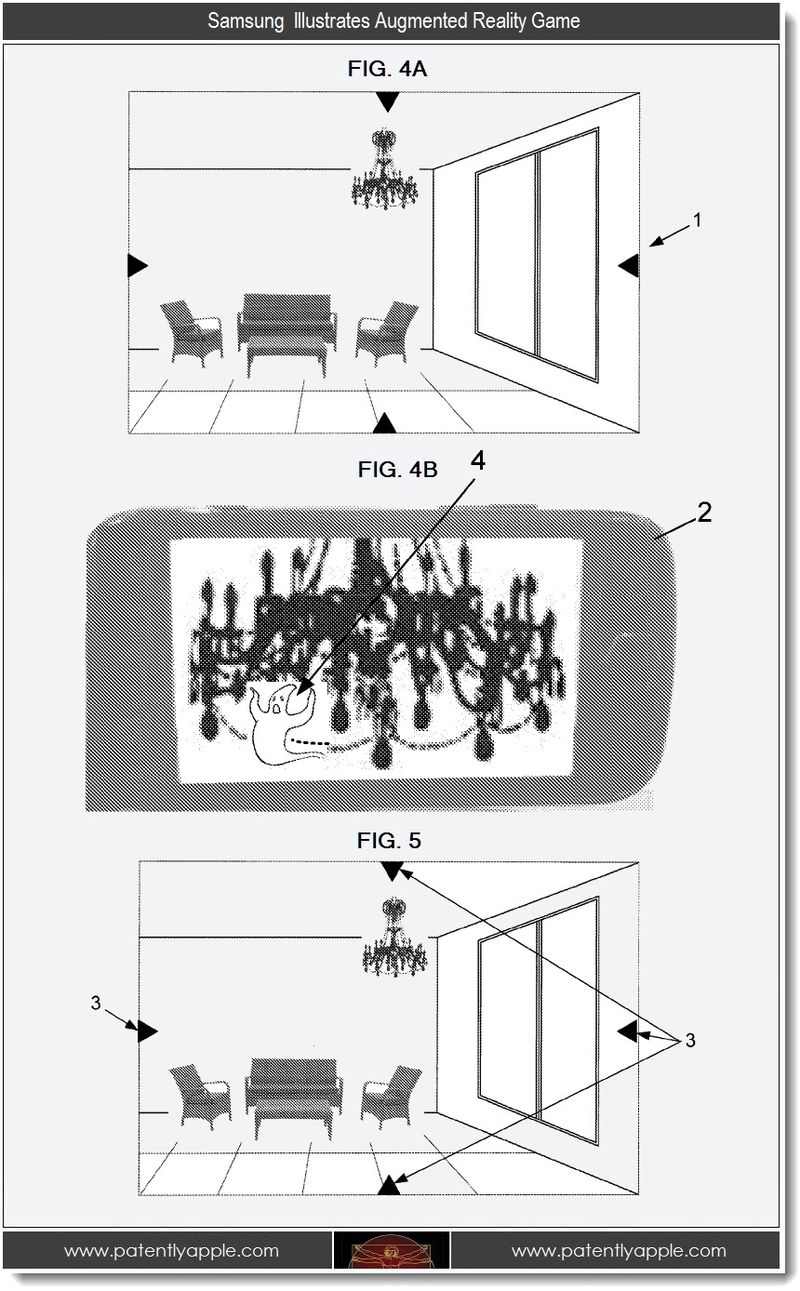 Samsung's patent FIGS. 4 (A and B) and 5 shown above illustrate an augmented reality game which supports 3D elements.

Samsung's patent application was originally filed in Q3 2010 and published by the USPTO in Q1 2012.

There are a fair number of other games using Apples GameKit interface to achieve this and if the so called iTV is to be released allowing apps to be loaded directly onto the television it makes even more sense to have mobile devices controlling content.